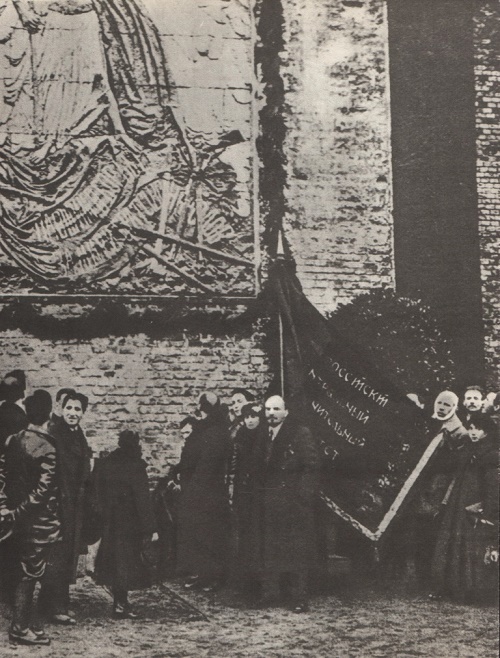 VI Lenin in Red Square near the Kremlin wall in front of a plaque installed in memory of the fallen for peace and brotherhood of peoples (by S. Konenkov). November 7, 1918

Art belongs to the people. Vladimir Lenin
There are ideas that capture the minds of the masses, become a symbol of social renewal of the world. They excite minds, destroy obsolete judgments, illuminate the way of struggle and work for people. These are the thoughts and deeds of Lenin. His name is a new era in the history of mankind. Live Leninist word transcended national borders, stirred the hearts and minds of the working people all over the world. The leader of the first workers’ state in the world paid constant attention to complex processes that took place in the artistic life of the young republic, to the arts as an important means of ideological and aesthetic education. “Art belongs to the people. It must leave its deepest roots in the very thick of the working masses. It should be understood for the masses and loved by them. It must unite the feelings, thoughts and the will of the masses and raise them. It should awaken artists in them and develop them.” These Leninist statements define the purpose of Soviet artist of serving people.
END_OF_DOCUMENT_TOKEN_TO_BE_REPLACED 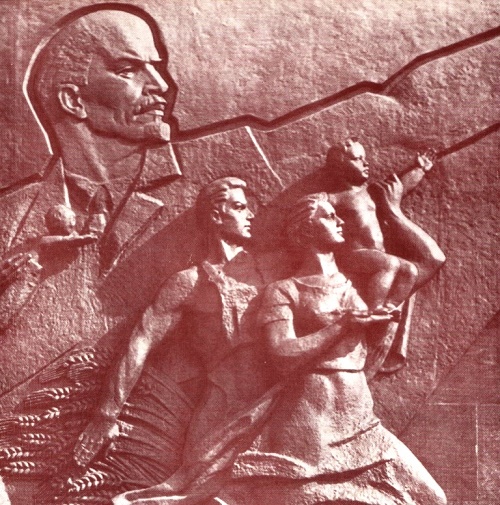 Soviet sculptor Andrey Faidysh (1920-1967) – Honored Artist of the RSFSR, winner of the Stalin Prize of the first degree (1950) – for the creation of sculptural reliefs “V. Lenin and I. Stalin – the founders and leaders of the Soviet state”; Laureate of the State Prize of the RSFSR of Repin (1967 – posthumously) – for sculptural portraits of SP Korolyov and Konstantin Tsiolkovsky (1963-1966) in a series of works devoted to the heroes of the cosmos. Corresponding Member of the USSR Academy of Arts. The most famous works of the Soviet sculptor – Monument “To the Conquerors of Space” in celebration of outstanding achievements of the Soviet people in space (Moscow, 1964). Andrey Petrovich Faidysh-Krandievsky is the author of such famous monuments in the USSR as: a monument to the heroes of the Civil War in the Far East, a monument to Konstantin Tsiolkovsky, a monument to the Bryansk guerrillas, portrait of Academician SP Korolev and other monumental works and works of easel sculpture.
END_OF_DOCUMENT_TOKEN_TO_BE_REPLACED 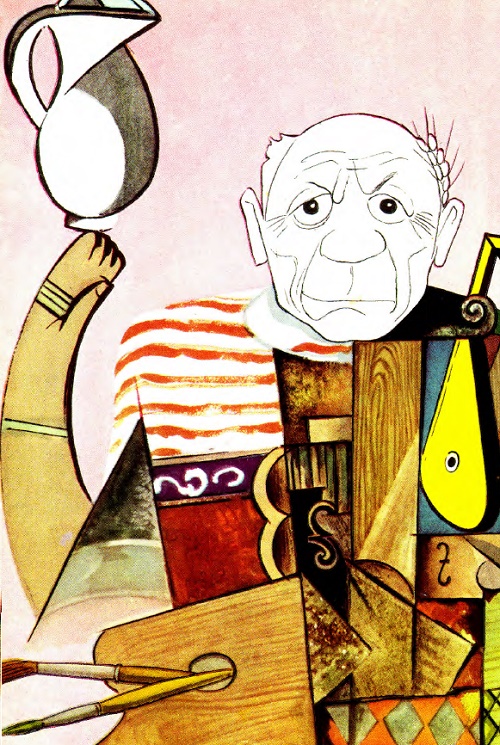 Masters of Soviet caricature Kukryniksy – creative team of Soviet graphic artists – Mikhail Kupriyanov (1903-1991), Porfiry Krylov (1902-1990) and Nikolay Sokolov (1903-2000). They were full members of the Academy of Arts of the USSR (1947), People’s Artists of the USSR (1958), Heroes of Socialist Labor. Their pseudonym “Kukryniksy” is made up of the first syllables of their names. Three artists worked by collective creativity (each also worked individually – on portraits and landscapes). The greatest popularity brought them numerous masterfully executed caricatures and cartoons, as well as book illustrations created in the typical style of caricature.
END_OF_DOCUMENT_TOKEN_TO_BE_REPLACED 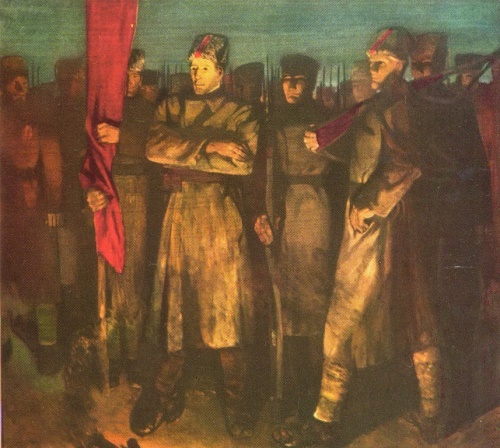 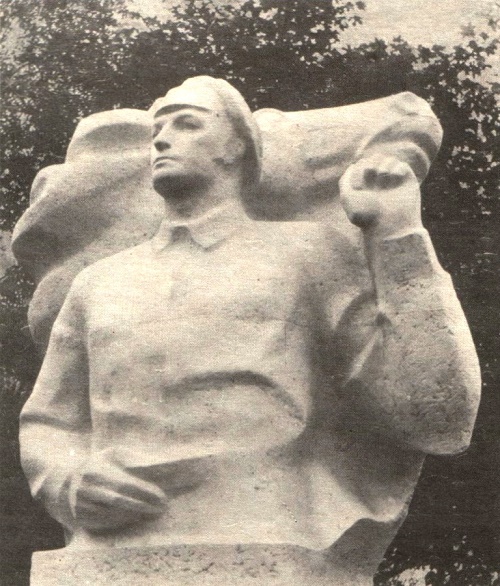 Lithuanian Soviet sculptor Gediminas Jokubonis (1927 – 2006) – People’s Artist of the Lithuanian SSR (1977), People’s Artist of the USSR (1987), winner of the Lenin Prize (1963). Member of the Communist Party of the Soviet Union since 1965. Since 1946, he studied sculpture at the Kaunas Institute of Applied and Decorative Arts. In 1952 he graduated from Vilnius Art Institute of the Lithuanian SSR (now the Academy of Art). Since 1965 Jokubonis taught at the same institution; Professor (1974), Full member of the USSR Academy of Arts (1983). Creativity of Jokubonis is characterized by a tendency to generalized forms of concise, expressive silhouette, a compact composition. His sculpture “Mother of Pirciupiai” refers to the most famous of his works. The memorial ensemble in the village Pirciupiai, 45 km south-west of Vilnius, where German occupiers burned the village, together with its 119 inhabitants in 1944, during the Great Patriotic War. The monument was erected in 1960 and Jokubonis received the State Prize of the Lithuanian SSR, and Lenin Prize in 1963.
END_OF_DOCUMENT_TOKEN_TO_BE_REPLACED 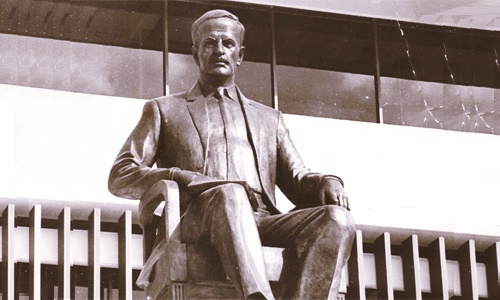 Soviet sculptor Oleg Komov (1932-1994) – People’s Artist of the USSR (1987), full member of the USSR Academy of Arts (1988), Professor. Winner of USSR State Prize (1981). Member of the CPSU since 1962. Until the 1970s Komov mainly worked in small sculptures. He is the author of many monuments of prominent figures of Russian culture, vivid historical figures, established in Moscow and other cities of the former USSR. To the work of Komov are characteristic laconic forms, intimacy scale, the proportionality of the viewer and the correctness of the historical context of the architectural environment. The figures of his monuments are usually supplemented by typical historical details or objects. His work – bright, individual pages of national sculpture of the second half of the XX century.
END_OF_DOCUMENT_TOKEN_TO_BE_REPLACED 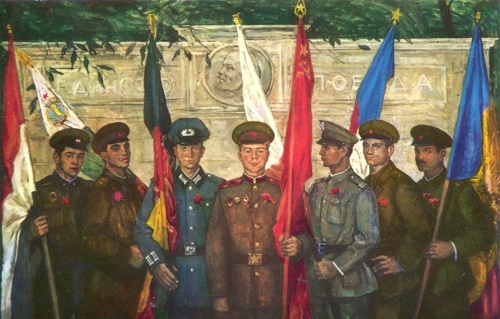 The painting “Warsaw Pact” shows soldiers of the socialist countries, standing under the banners of their armies, representing a reliable support of peace and happy creation of the fraternal peoples. In the military labor of the Soviet Army, he sees the guarantee of peace and protect, as the most precious and valuable on the Earth. Creativity of Soviet warrior artist Vladimir Pereyaslavets is inextricably linked with the army. People’s Artist of the RSFSR Vladimir Pereyaslavets – military officer, pilot and painter, whose life is connected with the art and the army. Vladimir Pereyaslavets (born November 22, 1918) – Soviet Russian painter, teacher, artist of studio of military artists of MB Grekov since 1950. Corresponding Member (1995), Academician of Russian Academy of Arts (2002), People’s Artist of the RSFSR (1980). Colonel of USSR Armed Forces, retired. Member of the Union of Artists since 1957.
END_OF_DOCUMENT_TOKEN_TO_BE_REPLACED