Soviet Era Monumental Fountain Golden Sheaf
Golden Sheaf monumental Fountain, also known as “Friendship of Peoples of the USSR” was created by the architect-artist KT Topuridze, engineer VI Klyavin and teams of sculptors Z. Bazhenova, AI Tenet, IM Chaikov, ZV Ryleyeva and VP Gavrilov. It was opened in 1954. The initial project was called The Main Fountain, but in project documentation of 1953-1954 was also called “Golden Sheaf”. And finally, since 1954, it’s official name has become “Friendship of Peoples”, however, some sources sometimes use the name “Friendship of Peoples of the USSR.” The Golden Sheaf Fountain, first of all, fascinates with its size and outright luxury. Pool of fountain – an elongated octagon with internal dimensions for the major axis of 81 m and a minor axis – 56 m. By the way, to completely bypass the octagonal fountain, one will have to pass 170 meters and an area of 3.5 thousand square meters. 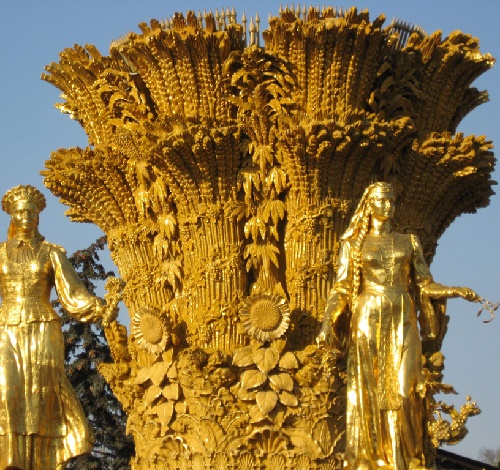 Center of the composition is a huge golden sheaf, around which are the dancing girls, symbolizing the friendship of many peoples of the USSR. Sheaf has a height of 7.4 meters, is made of copper sheets by punch through metal forms. Stepped granite base of the fountain, which in terms is reminiscent of the flower, gradually turns into a giant bowl-shaped sheaf, sunflowers and hemp. Statues of girls are made of bronze and covered with gold leaf. Beneath them the granite pedestals. 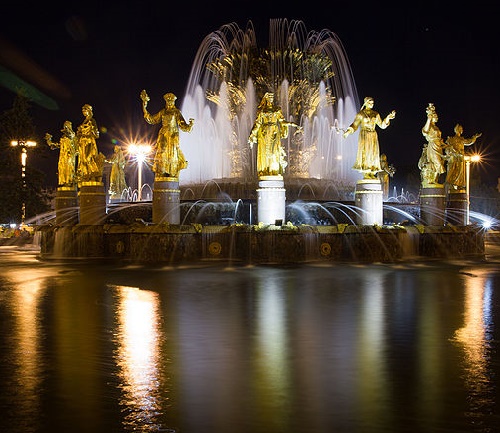 Fountain Bowl has an oval shape: overlooking the main pavilion party is actually 1/3 wider than the lateral (81 by 56 meters). Right under the sheaf of the fountain is a pump station. Its room is connected by an underground passage to the pavilion of the RSFSR. Initially, the hydraulic unit of the fountain could provide work of 800 jets, which patterns could change the overall composition of buildings, creating a complex pattern. 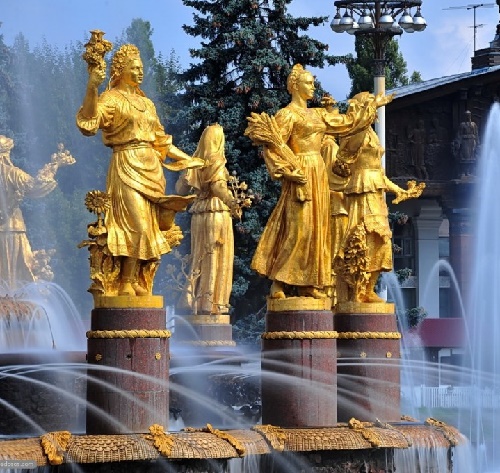 Also interesting is the order of 16 statues of women – republics. The number of the former republics of the Soviet Union at the time of the fountain (until 1956) was sixteen. But later, the 16th Karelian – Finnish republic entered the RSFSR. Russia stands in the center overlooking the main hall, on the right and left of it – Ukraine and Belarus. The other republics stand according to a special order, which coincides the list of the republics in the Act of 25 February 1947 “On amendments and additions to the text of the Constitution (Fundamental Law) of the USSR”. Republic were distributed quite rightly – by population. Thus, the least populated Republics are on the reverse side of the fountain, away from the entrance. And the visitors coming from the main pavilion, meet the statues of “main” republics. 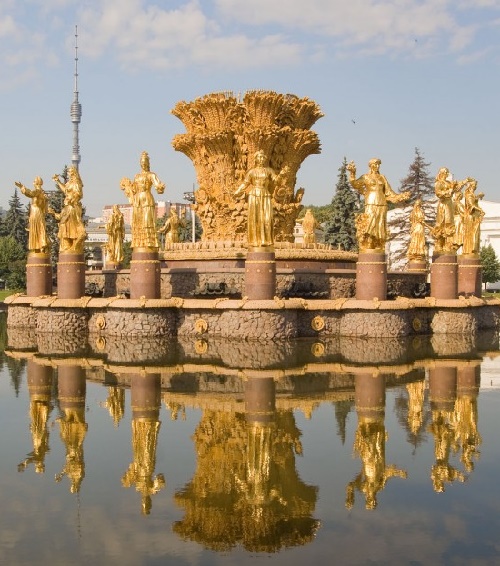 More than one generation of young Muscovites (and adult guests) tries to guess what republic the sculpture symbolizes. Very fun. All the girls are in a national dress. To guess correctly, you need to have a good understanding of ethnography suit.

Those women, too, can help solve this puzzle – for five sculptors posed 16 beautiful women of all 16 nationalities. But, unfortunately, now we know the names of only three of them: the Estonian ballerina Virve Kiple-Parsadanyan, Turkmen pianist Gozel Annamamedova and the beautiful Georgian Rodam Amirejibi. 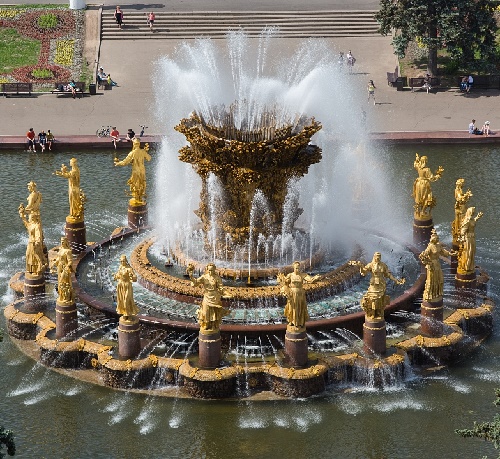 Another mystery – woman holds in her hands the agricultural plant, which is most often grown in the fields of her native republic. It is known that the first figures were not to be gold. But, as the story goes, Stalin was surprised: “Do we not have enough gold for our girls?”. And then Beria personally signed a decree to allocate from the state storage 3.5 kg of gold for the application of gold leaf. 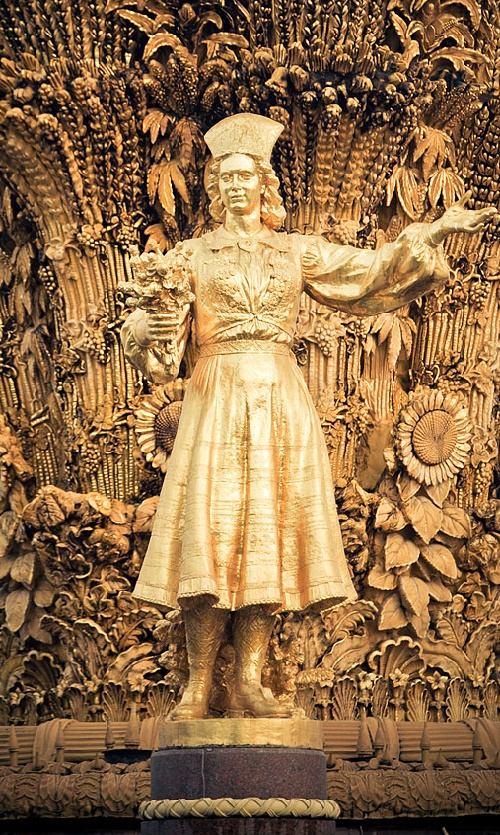 Estonian SSR. Preserved memories of Estonian ballerina Virve Kiple-Parsadanyan how her, a student of Moscow University, invited to the dean’s office and instructed to pose for one of the sculptors who worked on the fountain. The girl wears national costume of Muhu – the third largest island in Estonia. 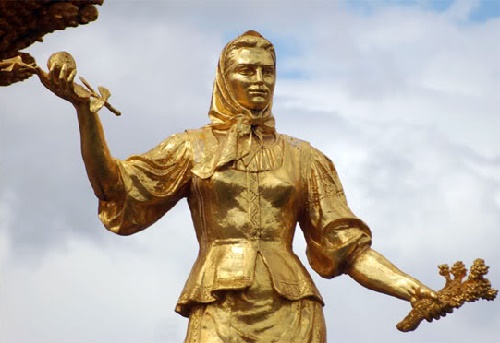 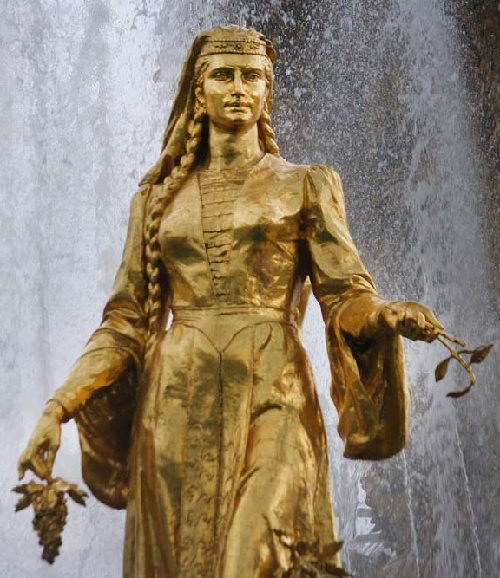 Georgian SSR. In the hands of a woman – a bunch of grapes as a symbol of Georgian wine. For the sculpture posed wife of the poet Mikhail Svetlov – Rodham Amirejibi 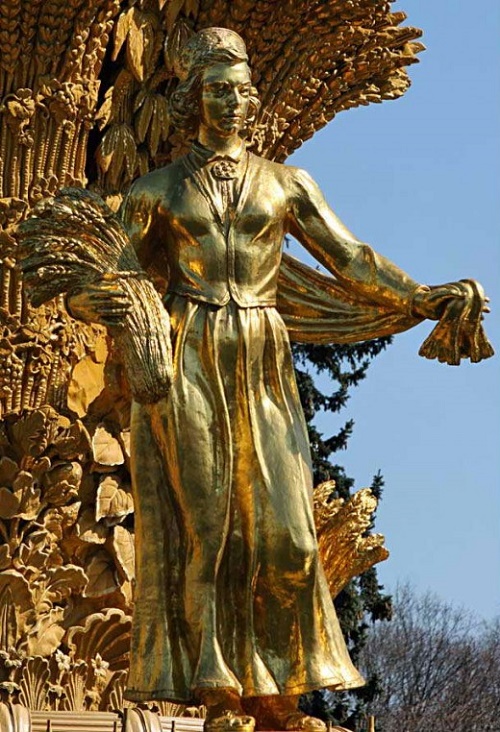 Latvian SSR. In the hands – wheat, which is also present on the coat of arms of the Republic. On the neck of the girl round brooch – Latvian national decoration Sakta 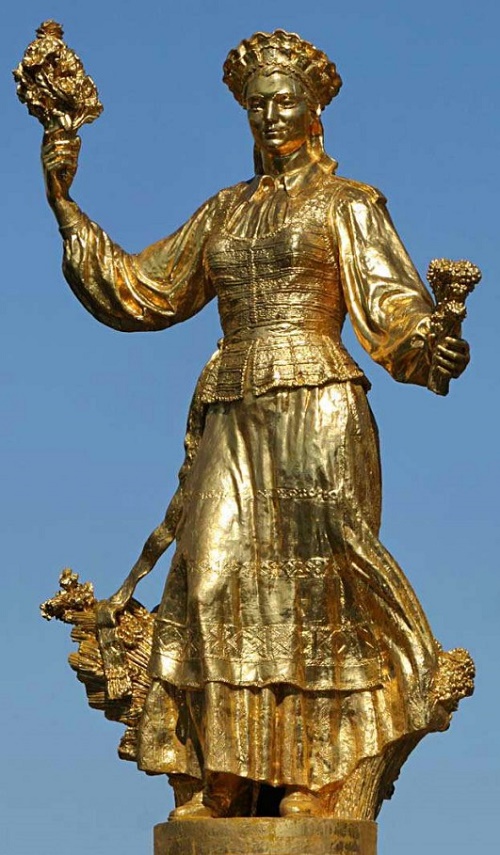 Lithuanian SSR. Ribbon in hair, in one hand flax and barley, in the the other – flowers and oak leaves that adorn the coat of arms of the Republic 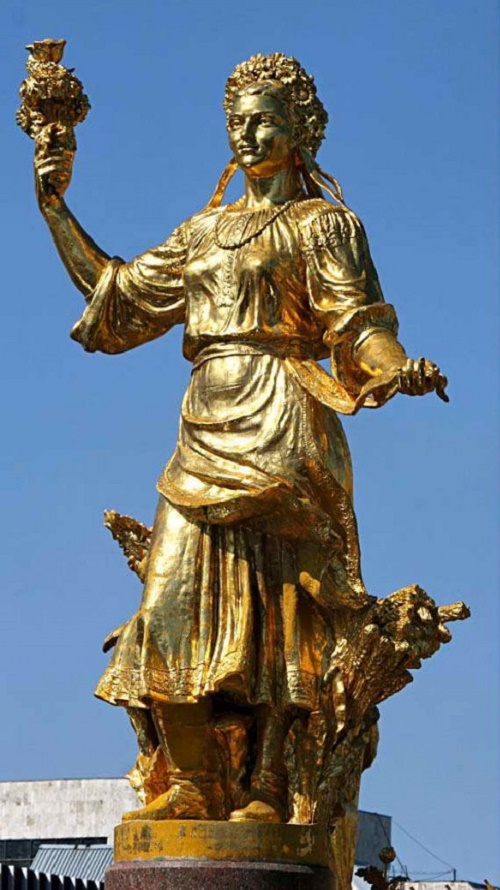 On the head the traditional wreath with ribbons, in the hands major cereals of Ukraine – wheat, grapes, sunflower 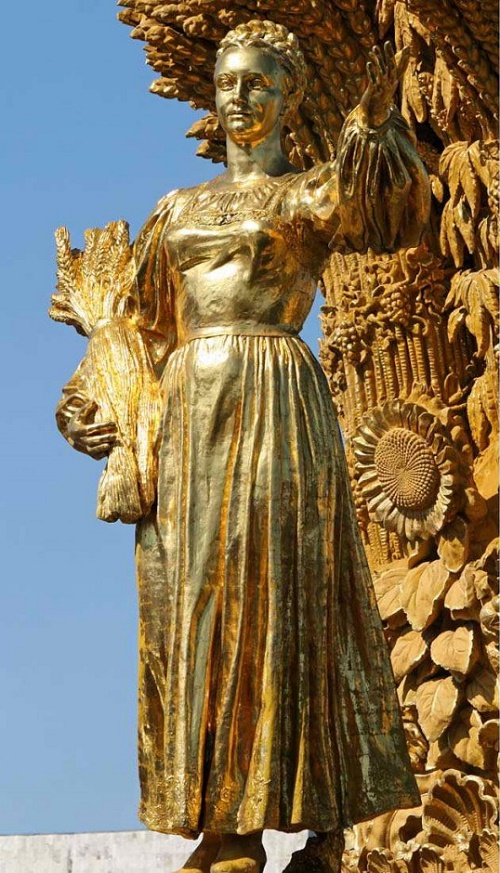 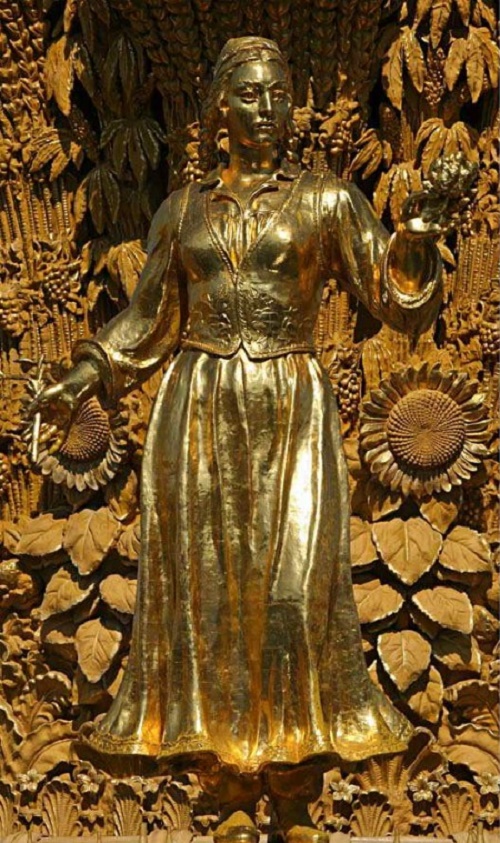 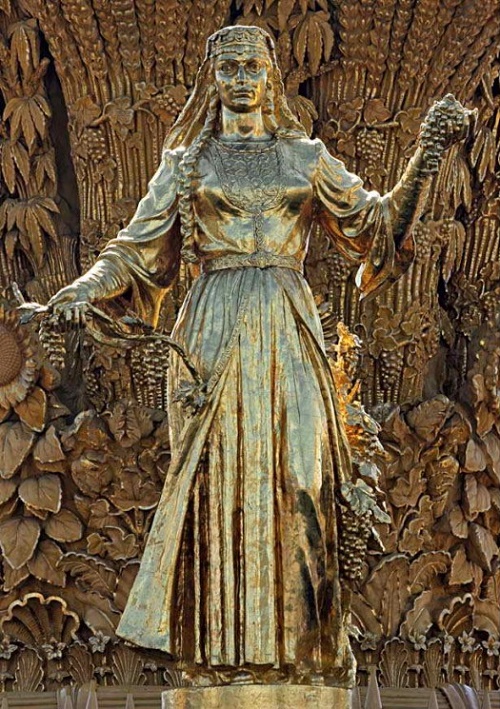 Armenian SSR. In the hands a bunch of grapes, and the head of the girl decorates traditional traditional belt with coins under the hair 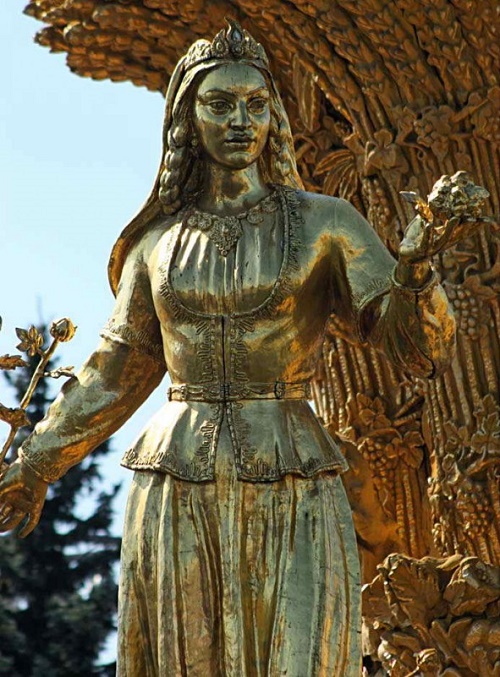 Azerbaijan SSR. On the head of the girl silk scarf with decoration – part of the national costume, and in the hands – cotton 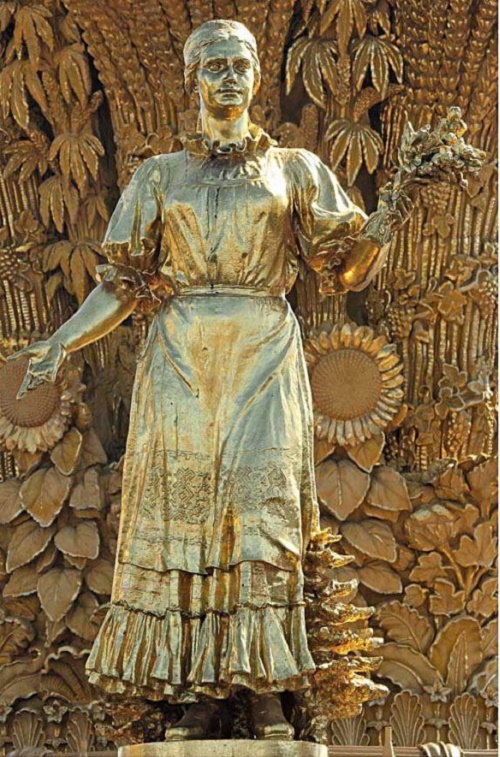 Karelian-Finnish SSR. Two years after the opening of the monument the republic became a part of Russia, but the sculpture remained. In the hands – flowers, and under the feet – a small conifer 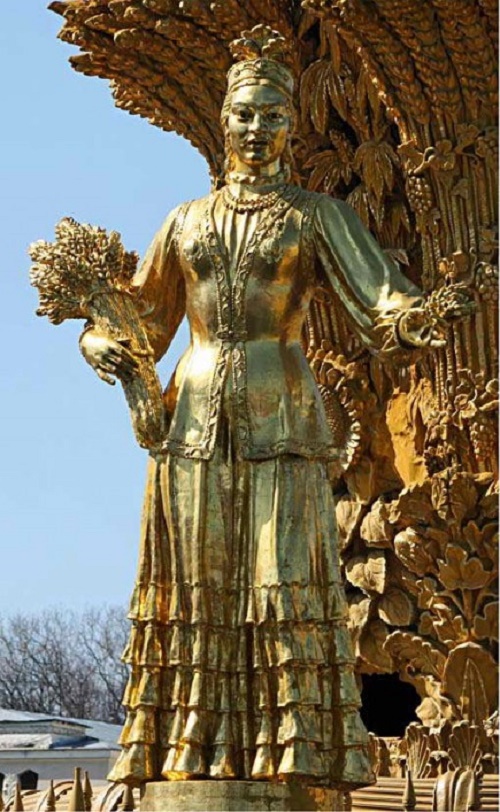 Kazakh SSR. In the hands of a girl’s wheat, and on her head a national headdress decorated with feathers beam 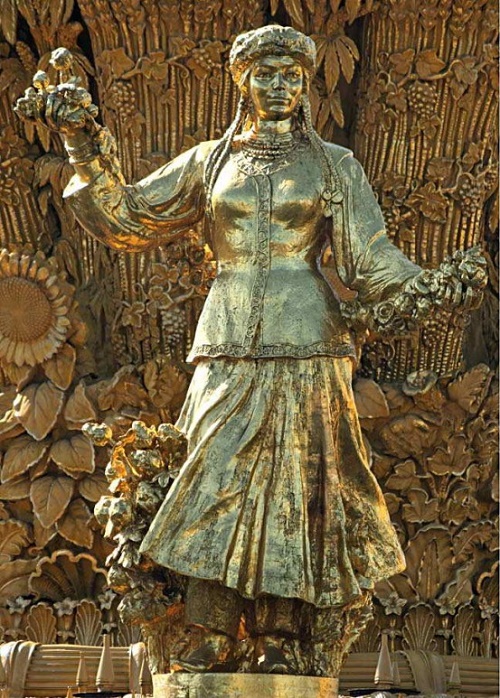 Kirghiz SSR. The headpiece is similar to a turban and a garland of flowers and cotton 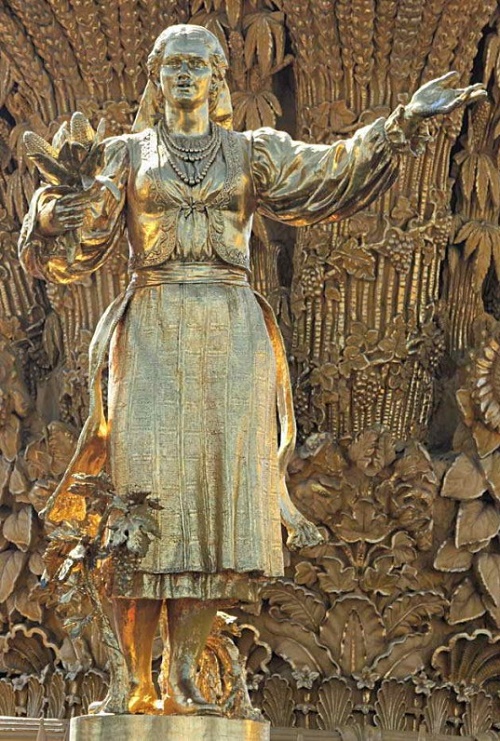 Moldavian SSR. Corn – the queen of fields. Her image is on the coat of arms of the Republic. Underfoot – grapes 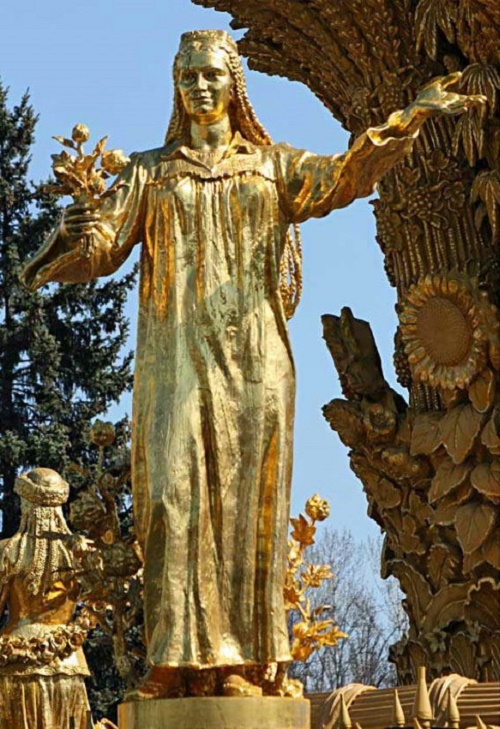 Tajik SSR – Plaits, free cut dress and cotton in the hands of woman 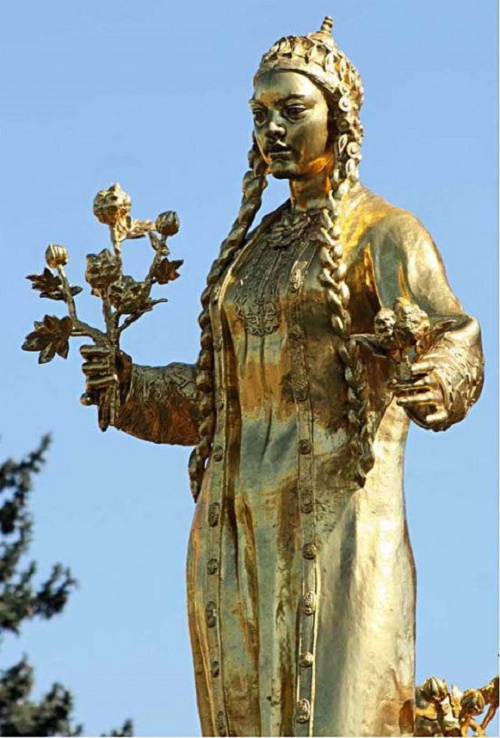 Turkmen SSR. Turkmen girl who posed for the sculpture – Gozel Annamamedova, a student of Moscow Conservatory, and later well known Turkmen pianist and teacher. In the hands – cotton