Soviet Era Monumental Fountain Golden Sheaf
Golden Sheaf monumental Fountain, also known as “Friendship of Peoples of the USSR” was created by the architect-artist KT Topuridze, engineer VI Klyavin and teams of sculptors Z. Bazhenova, AI Tenet, IM Chaikov, ZV Ryleyeva and VP Gavrilov. It was opened in 1954. The initial project was called The Main Fountain, but in project documentation of 1953-1954 was also called “Golden Sheaf”. And finally, since 1954, it’s official name has become “Friendship of Peoples”, however, some sources sometimes use the name “Friendship of Peoples of the USSR.” The Golden Sheaf Fountain, first of all, fascinates with its size and outright luxury. Pool of fountain – an elongated octagon with internal dimensions for the major axis of 81 m and a minor axis – 56 m. By the way, to completely bypass the octagonal fountain, one will have to pass 170 meters and an area of 3.5 thousand square meters.
END_OF_DOCUMENT_TOKEN_TO_BE_REPLACED 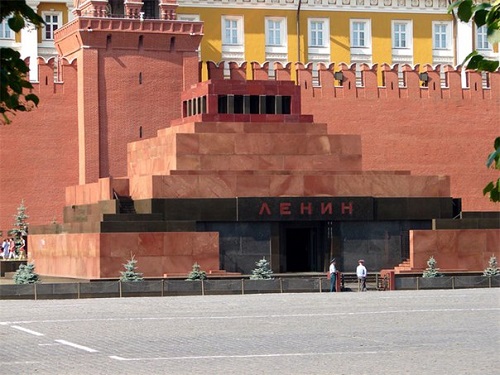 Greatest Soviet relic Mausoleum of Vladimir Lenin. This architectural monument to Lenin – the revolutionary, thinker, leader is well known around the world. Lenin’s Mausoleum – the creation of an outstanding architect of our time Alexey Viktorovich Shchusev. The history of the Mausoleum was told in the memories of People’s Architect of the USSR D. Chechulin: “I remember the hard days of January 1924. Unprecedented frost, bonfires in the streets, endless queue to the Hall of Columns of the House of Unions, Alarm beeps, Crystal chandeliers in the Hall of Columns, black crepe, pain of irreparable loss… In those days, only once Shchusev appeared in the training workshop addressing to the students, and his colleagues, he said that he is extremely busy: in a matter of days and hours is necessary to build a temporary mausoleum.
END_OF_DOCUMENT_TOKEN_TO_BE_REPLACED