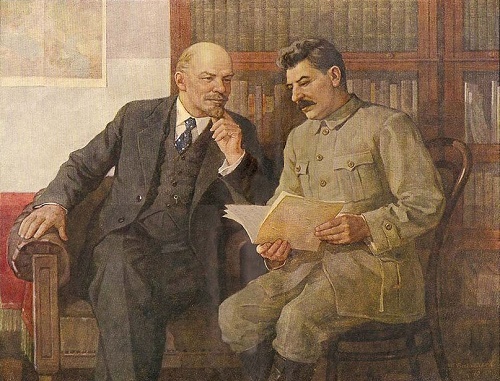 The life and work of Vladimir Ilyich Lenin is one of the main themes of Soviet art. Work on creating the image of Lenin – the most important stage of the creative biography of many Soviet artists. Pyotr Vasilyev is known for the fact that all his works he devoted to the re-creation of the immortal image of Vladimir Ilyich Lenin. Tirelessly, for many years he worked on the Leninist theme. Soviet artist Pyotr Vasilyev (1899 – 1975) – a member of the Association of Artists of Red Ukraine, People’s Artist of the RSFSR (1970), Winner of the Stalin Prize of the first degree (1947). He created a series of drawings and paintings devoted to Lenin and Stalin. Besides, he is the author of stamps. 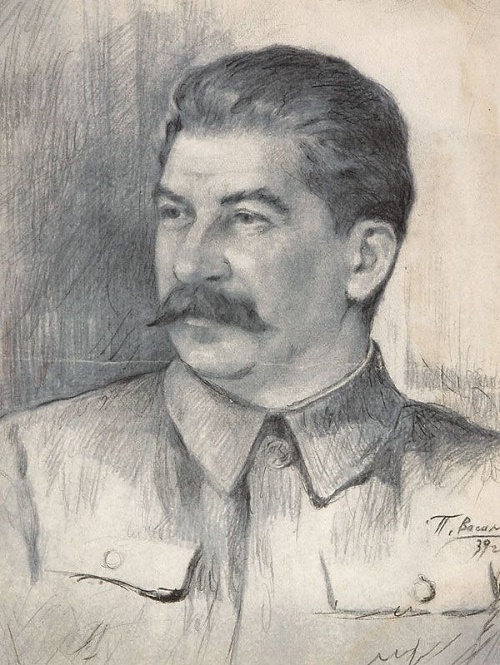 Pyotr Vasilyevich Vasilyev was born 13, 1899 in the Russian village of Staiki (Kaluga region) in the family of blacksmith VA Vasilyev. His mother, Tatiana Vasilyeva (nee Kurbatova) was a housewife. Vassiliev family consisted of nine people. His father died in 1919 of typhus. His mother died in 1957. Vasilyev lived in the house of his uncle – Yegor Kurbatov.

Pyotr Vasilievich was the eldest in the family. From an early age he knew the hard work: from early morning until late evening working in the forge, helped his mother with the housework. The desire to paint had appeared early. His first drawings (images of saints) were performed on the planed charcoal tablets. Parents, especially Uncle Egor, religious people, encouraged him. The first successes in painting was so great that the villagers began to turn to the boy asking him to draw the icon. And he drew, with great pleasure. But the originals of these icons didn’t survive due to a fire, which burned all the houses on the other side of the village, where the family of Vasilyev lived. And so far, this street is called Pogorelovka (from Russian – “burnt down”).

With much love and gratitude, the artist recalled his first teacher Maria Cheprygina, who praised her pupil and advised to draw everything that surrounded him. She gave him a set of oil paints, paper, brushes and often spoke with him about art.

In 1907, Vasilyev family moved to Krivoi Rog, where his father became a miner. Soon Pyotr came to the mine too. Despite the fact that the work of miner was very hard, Peter did not throw his favorite activity. And now the subjects of his paintings are gloomy faces of the miners, their miserable shacks, mines.

Once to the mine came the local rich patron of the arts – Rogovsky, who liked the pictures of the young artist. He suggested to parents to send Pyotr to study in the School of Commerce at his expense, from which Pyotr successfully graduated.

In 1914, Pyotr entered the Odessa Art School. He successfully completes the studying, and became a student of the Odessa Art Institute. Soon K. Kostandi, a favorite of Repin, takes Vasilyev into his workshop, where the young artist continues his studies. Gifted teacher managed to instill in the student demanding love of art, a sense of responsibility, diligence, seriousness in solving any problems. Renowned academician appreciated the young gifted youth, highlighting him among the rest of his students.

Constant communication with his favorite teacher, his invaluable advice helped Vasilyev develop his own artistic handwriting. Portraits, paintings, drawings performed by the artist, were repeatedly published in thematic albums, journals, often produced in the form of wall prints, greeting cards, postage stamps. The original work of the artist can be seen in the Central Museum of Lenin, the Tretyakov Gallery, in the museums of Russia and Ukraine, including in the Kaluga Regional Art Museum and its branch – Ulyanovsk Art Gallery, in the museums of many foreign countries, and the countries formerly part of the USSR. Large thematic range, truthfulness, sincerity, simplicity and artistic expression distinguish drawings of Pyotr Vasilyev. He is rightly called one of the representatives of the Soviet art school.

The central theme in the artist’s work from 1922 was the Leninist theme that Vasilyev remained faithful until his last days.

In 1931 Vasiliev moved to Moscow, where he continues to work and cooperate with the media. In 1934, at the Museum of the Revolution was organized exhibition of Vasiliev, devoted to the Civil War. The merits of the artist have been highly appreciated. In 1946, The Soviet government gave him the title of Honored Artist of the RSFSR. For drawings dedicated to VI Lenin, Pyotr Vasilyev, was awarded the Stalin Prize in 1947.

In 1970, PV Vasiliev was awarded the title of People’s Artist of the RSFSR. In 1974 he was awarded the Order of Lenin. Already a well-known artist, Peter Vasilyev did not lose communication with the homeland, where he was born and grew up. He helped financially in the construction of a new school in his native village – Staiki.

In 1975, Soviet artist Pyotr Vasilyev died. In memory of the life and activities of their countryman, the school in Staiki established Museum of Vasilyev, which stores his personal belongings and art prints.

Lenin speaking on Red Square. May 1919

V.I. Lenin with a pencil

VI Lenin and AM Gorky Listening to Pianist 1949

VI Lenin in editorial office of ‘the newspaper ‘Vperyod’ (Forward)

VI Lenin in Gorki talks with the peasants, 1943

VI Lenin in his office

VI Lenin in Smolny with the Red Army soldiers, 1956

VI Lenin with delegates in the Kremlin, 1946

VI Lenin, in a train carriage on the way to Petrograd, 1949

Vladimir Ilyich Lenin with a notebook

Drawing. Lenin in Gorki talks with the peasants, 1943

Vladimir Lenin – tribune of the revolution, 1966