Soviet artist Pyotr Ossovsky (May 18, 1925 – August 1, 2015) – Corresponding Member (1988), Academician of the Russian Academy of Arts (1995), People’s Artist of the USSR (1988), winner of the USSR State Prize (1985), member of the USSR Union of Artists since 1956. Ossovsky entered the Soviet art in 1960s, he was one of the so-called “severe style”. Ossovsky traveled a lot: Siberia and Central Asia, Vologda and the Crimea, Italy and Britain – this is an incomplete list. Travel – an essential part of his creative life. Ossovsky was a genuine internationalist, able to understand the soul of another people, to find common concerns, hopes, joys of all people of the earth. Working in Mexico, for example, he learned Spanish, knew Mexican songs, creativity of eminent artists. And the trip resulted in an excellent series of paintings. 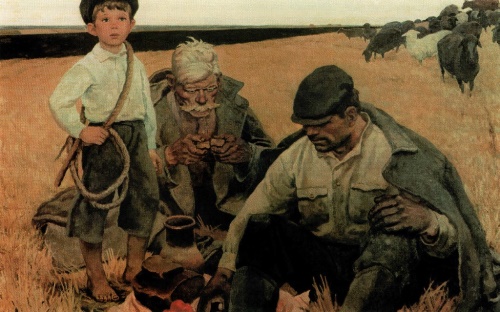 From the memoirs of Soviet artist G. Korzhev:

… 1940. Art School on Kalyaevka. On one of the small exhibitions I met Pyotr Ossovsky, rather, with his work “militias”, and then also with sketches on historical themes. These were multi-national stage, always in strong movement, always with passion. Emelyan Pugachev, Stepan Razin, Ivan Bolotnikov, the heroes of the Civil War and the October Revolution were among the favorites. Small pieces of paper or cardboard full of movement, emotion, impulse. Riding horses riders, climbing the peaks to the sky; coats, jackets and women’s dresses – everything moved. As it turned out, it was not yet Pyotr Ossovsky. And in order to become one, a talented student of the Moscow Art School had to go a long way.

But at that time, before the war in 1940, was born and took shape in the boy’s soul something very important. Was born and matured persistent love for art. And this became the foundation on which the future artist was able to grow. Then, when the war began, we were with the whole school in the Bashkir village of Voskresenskoye. I do not remember the works of Pyotr Pavlovich this period, though he, like the rest of the school, painted and drew constantly. The boys were eager to work. Mountain sketches, drawings, watercolors grew daily. The school was electrified with creative energy, but the possibility for serious academic study was extremely limited. Was absent, even in a minimal amount paint, paper, equipment.

Time of war, deprivation, loss of loved ones, homelessness and lack of clarity of the future – that’s what defined the internal state of the pupils. Anxiety lived in the hearts, but eyes saw the beautiful nature, village life, its military life and work. Pyotr Ossovsky experienced the same. This important spiritual baggage he brought along with youthful sketches and drawings, when returned to Moscow in 1943.

Then came the student years. To the capital returned from evacuation museums, the number of exhibitions increased. We, the students, used the opportunity to see a collection of the Dresden Art Gallery. There was a strong passion for art. After a few years, when we did not see any large canvas of artists, before us were the originals of Raphael, Rembrandt, Titian, Surikov, Repin, Vrubel. We raved art, breathed its air.

During his student years, the sport entered our lives. And one of its most ardent admirers was Pyotr Ossovsky. Sports was not only a part of his life, but also his creativity. Thesis work was the first painting in a series devoted to this topic. It grabbed the young artist and put in front of him some artistic problems: transmission of motion, dynamics of composition, conciseness means, the need of aesthetic development of a new perspective. A sports theme of modernity entered Ossovsky art was decisive, dictated the pictorial language and creative manner.

One of the first artists of the postwar generation Ossovsky turned to the life of a small provincial Russian town. Appeal to the life of the province appeared to Ossovsky natural. As a child he had to visit many cities of our country. And in Moscow a few years, he lived on the outskirts, knew and felt provincial life.

Interestingly, from the first steps Ossovsky creates a group of works devoted to a single topic. Cuba, Mexico, Siberia, Czech and Slovak motives, Bulgaria – each of these series turned into small exhibitions. Many years later, he returned to Moscow topic. But now it has become the center of our capital – the Kremlin. Pyotr Pavlovich devoted Many canvases to the Kremlin in search of better solutions.

The fishermen of the Far East (diploma thesis). Oil. Fragment. 1983

Pyotr Ossovsky. A family. The central part of the triptych. From the series of Mexico. Oil 1962-1964

Motherland. 1983. Ownership of the RF Ministry of Culture, Moscow

Old fisherman. 2002. Property of the artist

Portrait of a father. 1990. The property of the artist

Portrait of a mother. 1990. The property of the artist

Portrait of daughter. 1982. The property of the artist

Portrait of son. 1982. The property of the artist

Portrait of wife. 1969. The property of the artist

Pskov blacksmiths. Option. 2002. The property of the artist

The builders of the Baikal tunnel BAM. 1980. The Union of Artists of Russia, Moscow

PP Ossovsky. On the waterfront