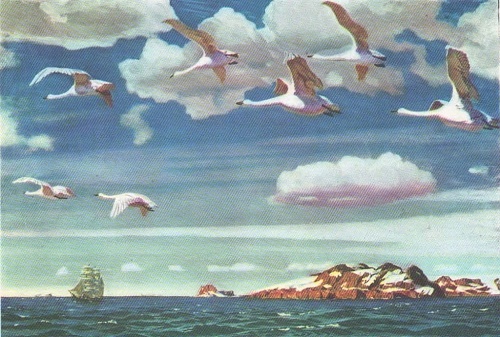 One of the first landscape paintings of great ideological content is a picture of a prominent Soviet artist Arkady Rylov “In Blue vastness”, created in 1918. This picture is part of a number of those works, from which starts the history of Soviet art. And this is absolutely correct, because “In Blue Vastness” – one of the first significant ideologically and artistically works created in the first years of Soviet power, though those that have retained not only its historical value, but also today give us a living aesthetic pleasure. The painting was as if the result of many searches and achievements of the artist for all his previous artistic life … Arkady Rylov – wonderful landscape painter, the successor of the great traditions of the Russian school of painting, who created one of the first impressive images of Lenin (“Lenin in Razliv”) – leader, fighter, builder of the new life, which entered the treasury of Soviet art.
END_OF_DOCUMENT_TOKEN_TO_BE_REPLACED 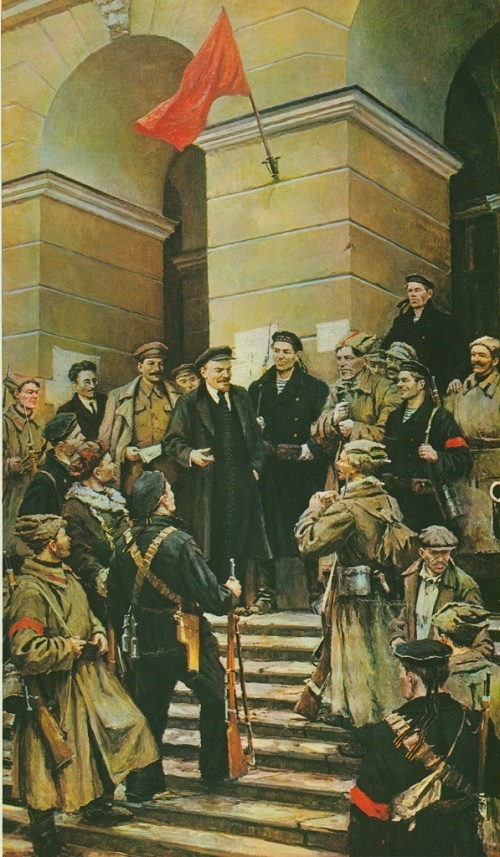 October in Smolny. Soviet artist Nikolai Osenev has reproduced the scene of meeting Lenin with the soldiers of the revolution – the workers, soldiers, sailors in Petrograd, at the entrance to the Smolny, which in 1917 became the headquarters of the Great October Socialist Revolution. Soviet artist Nikolai Osenev (1909-1983) – Honored Artist of the RSFSR, Honored Worker of Culture of the Polish People’s Republic, landscape, genre painter, an author of works on historical and revolutionary themes. Nikolai Nikolaevich Osenev was born in 1909 in Moscow. He studied at the Moscow State Art Institute of Surikov (from 1938, with interruptions). His teachers were S. Gerasimov, Igor Grabar, AA Deineka. Nikolai Osenev – participant of art exhibitions since 1949. Since the beginning of the 1950s was active in the open air. By the mid-1950s he became known master of composite landscape. In 1960s he traveled abroad (England, Italy, France, Sweden, Iraq and others) and created a series of works, mainly architectural motifs. His works are in the State Tretyakov Gallery, Moscow; Penza art gallery and other museums and private collections.
END_OF_DOCUMENT_TOKEN_TO_BE_REPLACED 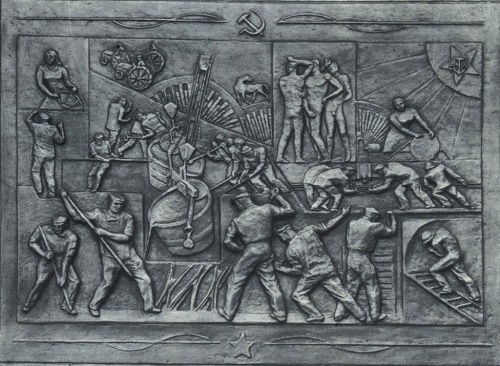 In the days of October, in the turbulent revolutionary period, he was little more than twenty years old. By today’s standards it’s still young age. And then behind the young man was already serious enough life experience, difficult biography, closely intertwined desire to become an artist, and the need to earn for a living. Soviet artist Vasily Pogorelov (1895 – 1980) was born in a large family. Early lost his father. The mother could not feed her five children, and Vasily had to work. A twelve year old teenager, he already worked 16 hours a day at the tobacco factory – as an adult. From the strong exhaustion and malnutrition he became seriously ill. And, of course, recovered, stronger, found the strength to live and to dream.
END_OF_DOCUMENT_TOKEN_TO_BE_REPLACED 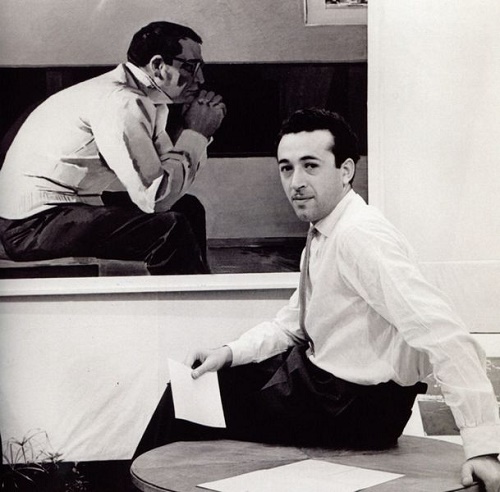 Soviet artist Tahir Salakhov – a teacher, professor, member of the CPSU since 1964, Member of the Supreme Soviet of Azerbaijan SSR (1963-1967), corresponding member (1966), the Supreme Soviet of the USSR 7-8 convocations (1966-1974), winner of the State Prize USSR (1968), People’s artist of the USSR (1973), Academician of the USSR Academy of Arts (1975), member of the Presidium of the USSR Academy of Arts in 1979, Hero of Socialist Labor (1989), vice-president of the Russian Academy of Arts since 1997, member of the CPSU Central Committee in 1990-1991, laureate of the State Prize of the Russian Federation (2012). Tahir Teymur oglu Salakhov was born November 29, 1928 in Baku, Azerbaijan SSR, Soviet Union. The representative of Azerbaijan, where before the Great October Revolution there was virtually no easel painting, he became one of the leading Soviet artists, known public figure, teacher. He seems to represents the fate of the republic, the rise and development of which in the united family of peoples of the Soviet Union could be seen very clearly.
END_OF_DOCUMENT_TOKEN_TO_BE_REPLACED 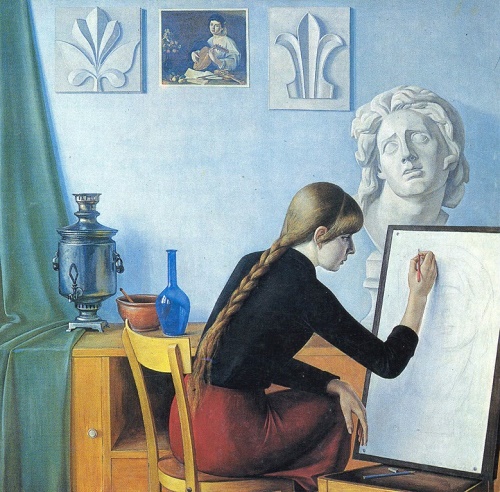 Soviet painter Valentin Chekmasov was born November 13, 1940 in Sortavala of Karelian-Finnish SSR of the USSR. In school, Valentin learned in the art studio of the Petrozavodsk Palace of Pioneers. In 1958-1962 he studied and graduated from the Leningrad Art and Graphic pedagogical school. In 1962-1968 he studied and graduated from the painting department of the Leningrad Institute of Painting, Sculpture and Architecture (studio of Neprintsev). In 1971 Chekmasov was admitted to the Union of Artists of the USSR. In 1985-1991 he was a chairman of the Union of Artists of Karelia. He works in different genres, including portraits, landscapes, graphic art. Chekmasov is the successor of the traditions of Russian realistic school, his paintings are clear and close to the heart of a common man. Works of People’s Artist of the Russian Federation Chekmasov are in the State Tretyakov Gallery, the Museum of Fine Arts of the Republic of Karelia, Arkhangelsk, Sverdlovsk, Volgograd Museum of Fine Arts, Fine Arts museums of the Komi Republic and others.
END_OF_DOCUMENT_TOKEN_TO_BE_REPLACED 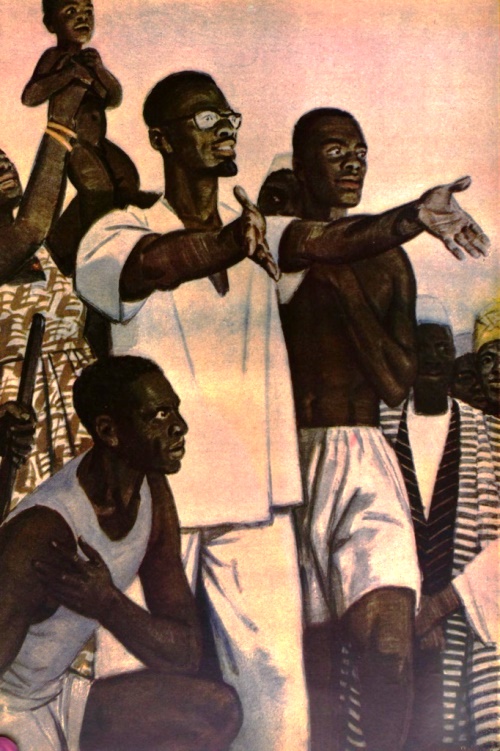 Soviet artist Dementy Shmarinov
Among the honors and titles of Shmarinov are – Academician of the USSR Academy of Arts (1953), Corresponding Member of the German Democratic Republic Academy of Arts (1970), and People’s Artist of the USSR (1967). Besides, Laureate of Lenin (1980), second-degree Stalin Prize (1943) and the State Prize of Russia (1997).
Born April 29, 1907 in Kazan, Shmarinov grew in the family of an agronomist. He studied in Kiev art institute (1919-1922), workshops of NA Prakhov. Then, graduated from the Moscow art institute (1923-1928). He was a chairman of the Board of the Moscow Union of Artists of the RSFSR in 1959-1961, 1966-1968 and 1972-1973. In addition, the Secretary of the Board of the USSR Union of Artists since 1968. Known primarily as an illustrator. Characterized by a realistic accuracy, his work is a graphic interpretation of literary works, noted for the credibility of the transmission of dramatic situations and socio-psychological characteristics of his heroes.
END_OF_DOCUMENT_TOKEN_TO_BE_REPLACED 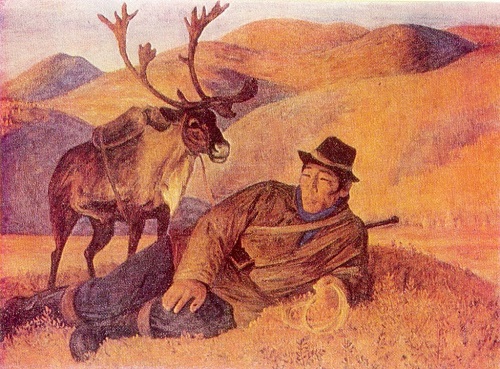 Soviet Yakut painter Afanasy Osipov
Born in 1928 in Ergit nasleg of Yakutia, Afanasy Osipov was People’s Artist of the RSFSR, Honored artist of Yakut ASSR, member of the USSR Union of Artists since 1956. The winner of the Yakut Komsomol Award, and corresponding member of the USSR Academy of Arts. In 1955 he graduated from the painting department of the Moscow State Institute named after VI Surikov, which he entered in 1949, after finishing Art School at the same institute. He was awarded the Order of Red Banner of Labor, the medal “For Valiant Labor” in commemoration of the 100th anniversary of Lenin’s birth.
Noteworthy, in the sixties of the last century, in Yakutia has formed a creative group of leading painters. For the next decade they created many paintings that enriched the perspective of the modern fine arts of the republic. They widened the theme of the native land, which now sounds in a new way, deeper and fuller, often in close conjugation with the past and the future.
END_OF_DOCUMENT_TOKEN_TO_BE_REPLACED