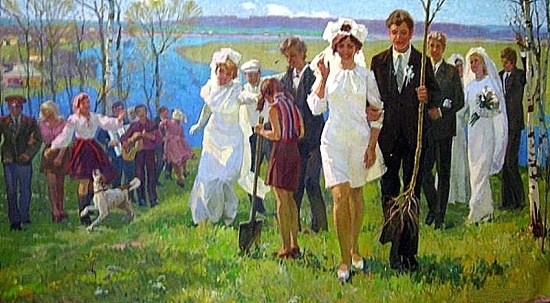 Soviet artist Pyotr Antonovich Yablonovsky
Born 25 July 1910 in the village of Khartsyzsk, Donskoi Voivodship of Russian Empire, Yablonovsky became known as a Soviet Ukrainian artist, a representative of the Soviet school of socialist realism. In 1941 he graduated from the Kiev Art Institute, where he studied at the workshops of Soviet artists F. Krichevsky, M. Sharonov and S. Grigoriev. After graduation, like many peers of that time, he went to the front. After the end of the war he participated in exhibitions of Soviet art and soon became a member of the USSR Union of Artists.
Meanwhile, the main themes of the artist were the heroic days of Soviet power, military themes and heroes, in particular, Vasily Chapaev, the hero of the civil war. The artist also created landscapes and genre paintings. One of the most talented paintings of the artist “Svyatoshino. An experimental fish breeding station “(1949), is in the regional art museum of Lugansk.
END_OF_DOCUMENT_TOKEN_TO_BE_REPLACED 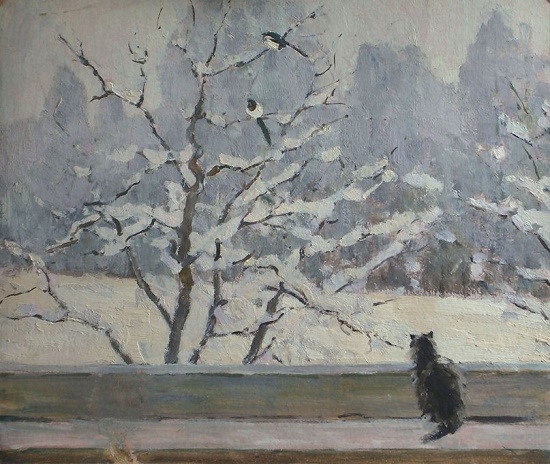 Soviet Russian artist Vyacheslav Tokarev
Born July 26, 1917 in Bogoroditsk of Tula province, Vyacheslav Tokarev was the same age as the Great October socialist revolution. The boy grew up in Moscow, as his family moved there soon after his birth. Aged 17, he entered the Ryazan Art College, where he studied in the workshop of Y.Ya.Kalinichenko (1934-1938). And the next year he entered the painting faculty of the Institute of Painting, Sculpture and Architecture of the All-Russian Academy of Arts (workshop of Professor A.A. Osmyorkin). However, forced to interrupt studying because of the Great Patriotic War, in 1941 he became a rifleman of the 576 rifle division of the Leningrad Front. Demobilized in connection with the wound, in 1943 he returned to study at the institute, where he studied in the workshop of Professor Avilov. Tokarev graduated from the institute in 1948 with the diploma painting “Kovpak”, and the same year he became a member of the Leningrad Union of Soviet Artists (1948).
END_OF_DOCUMENT_TOKEN_TO_BE_REPLACED 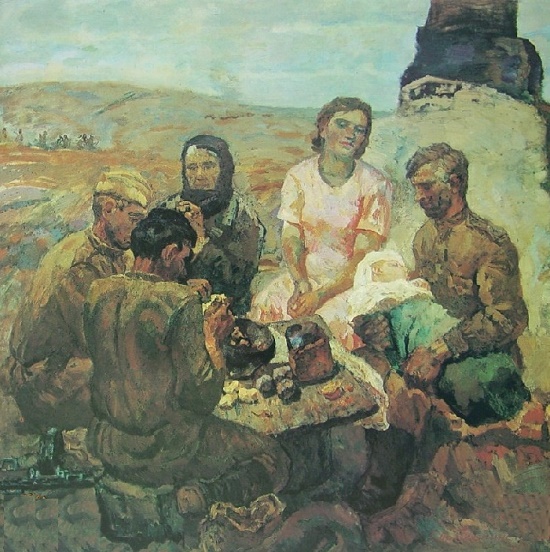 Soviet artist Gennady Ivanovich Prokopinsky
Born July 26, 1921 in the village of Staronizhesteblyevskaya (Krasnodar Territory), Gennady Prokopinsky lived and worked in Moscow. His first art education began in 1939-1940 at the Moscow Regional Art College in memory of 1905. Since 1940 he worked in the Studio of Military Artists of Mitrofan Grekov. Studio of military artists named after M.B. Grekov, created in 1934, was a unique creative team of military artists. The first generation of Greeks became not only singers of the military past, but also chroniclers of brutal military trials of the Great Patriotic War. Among these military artists was Gennady Prokopinsky, who was on various fronts and finished the war in Berlin. The author of works of monumental art and a series of easel paintings on a military-patriotic theme, he began to take part in art exhibitions of Soviet art since 1942. Veteran of World War II, awarded with medals “For Military Merit” and “For Victory over Germany in the Great Patriotic War of 1941-1945.”
END_OF_DOCUMENT_TOKEN_TO_BE_REPLACED 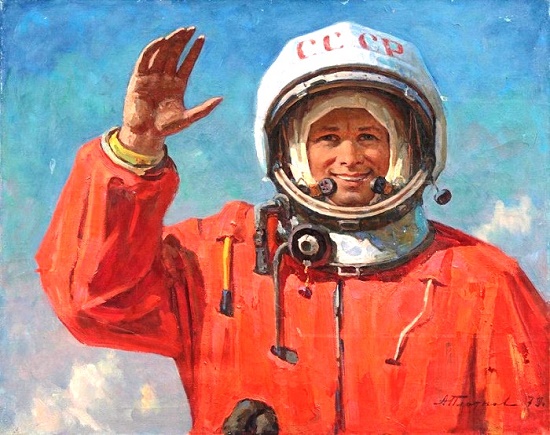 Soviet artist Andrei Ivanovich Plotnov
Born July 21, 1916 in the village of Verkhne-Pavlovka of Lipetsk region, Andrei Ivanovich Plotnov grew up in a peasant family. He studied at the Moscow Art College (1933-1936). In 1936, on the recommendation of the famous Soviet artist Igor Grabar, he entered the painting faculty of the Moscow Institute of Fine Arts. Plotnov – participant of art exhibitions since 1939.
Since the first days of the Great Patriotic War, he left the institute’s 5th year for the national militia. Evacuated to Samarkand in 1942, the same year he graduated from the institute, the workshop of Professor G.M. Shegal. His thesis work was “MV Frunze and Vasily Ivanovich Chapaev under Ufa”.
Member of the Moscow organization of the USSR Union of Artists from 1943, the same year he went to the front and entered the art studio of the NKVD of the USSR, under the leadership of P.P. Sokolov-Skalya. During the period of 1943-1944 he often goes to the front lines, draws portraits of soldiers and officers who have distinguished themselves in battles, as well as individual events of combat life. During the war, the artist created more than 20 political posters, demobilized from the army in 1947.
END_OF_DOCUMENT_TOKEN_TO_BE_REPLACED 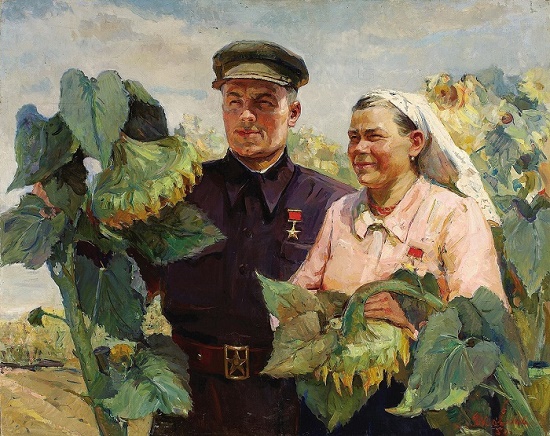 Soviet Ukrainian painter Elena Yakovenko 1914-1999
Born July 25, 1914 in the city of Merefa, Kharkov region, Ukrainian painter Elena Nikolaevna Yakovenko studied at the Kharkov State Art Institute. From 1938 to 1946 she studied at the workshops of Soviet artists A.Kokel and S.Prokhorov. Yakovenko – a member of the Union of Artists of the Ukrainian Soviet Socialist republic since 1946. The author of genre paintings, landscapes, still lifes, she was a participant of regional, republican, international and foreign exhibitions of Soviet art since 1945. Her solo exhibitions took place in her native Kharkov (1950, 1982, 1993), in Sumy (1962) and Kiev (1969, 1984). In addition, E. N. Yakovenko taught at the Kharkov Art College.
Social realism painter and graphic artist E. N. Yakovenko died in 1999 in her native Kharkov.
END_OF_DOCUMENT_TOKEN_TO_BE_REPLACED 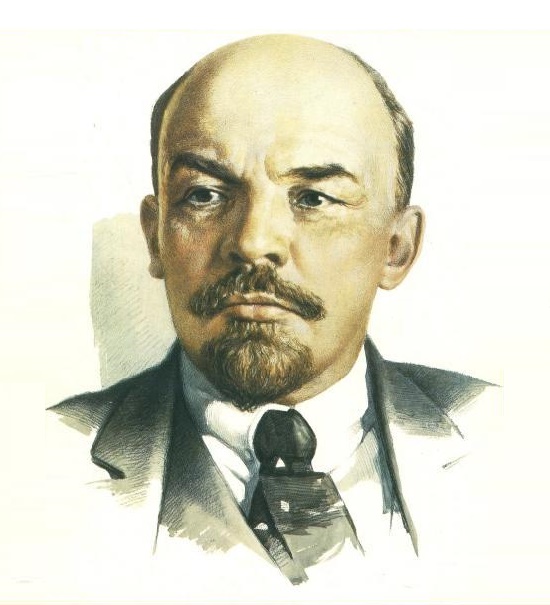 Soviet artist Noe Nestorovich Gedenidze
The famous portrait of V.I. Lenin, printed in millions of copies, hung in every office of each party worker. However, very few people knew at that time that this well-known image belongs to the artist Noah Gedenidze.
Born July 14, 1914 in Matkhodzi village of Georgia, the future Member of the USSR Union of Artists Noe Gedenidze was one of the most original artists of the Soviet epoque. Before the WWII he studied at the Tbilisi Academy of Arts. Then 2 years fought on the fronts of the Great Patriotic War. Seriously wounded he was in a hospital in Moscow. In his mature years, in 1962 he graduated from Surikov Moscow State Art Institute.

Along with A. Laktionov, he painted portraits of party and government leaders. Meanwhile, his real art life passed in a two-story studio in a silent Olkhovsky Lane, where he painted for his own pleasure, his own way, not even expecting to participate in any exhibitions. At that time he created colorful symphonies full of complex symbolism and individual mythology. Indeed, during Gedenidze’s lifetime the only small exhibition of his works took place in 1987 in Khimki, a Moscow suburb. We are just starting to discover this artist now.
END_OF_DOCUMENT_TOKEN_TO_BE_REPLACED 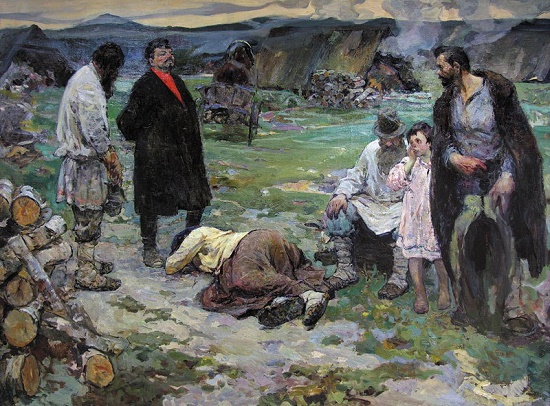 Soviet artist Vasily Andreevich Neyasov (July 14, 1926 – October 7, 1984) – Member of the USSR Union of Artists (1948).
Born July 14, 1926 in Makarovka village of Penza province, Vasily Andreevich Neyasov grew up in a peasant Mordvinian family. From the age of 12 he began regular art classes – in the studio of Mordovian artists (1938-1940), at the children’s art school in Saransk. His teachers were MV Levitina, Boris Yermilov, MA Zernina, and MA Faichin (1940-1943). During the war years (1941-1943) he worked as an artist-designer of the Mordovian Music and Drama Theater under the leadership of MA Zernin and B.I. Roslenko-Ridzenko. Also, during hard years of WWII he managed to work as an assistant to the machinist of Ruzaevka railway station.
After the war ended, he decided to continue his art education and entered the Moscow Art College in memory of 1905, workshops of V.N. Baksheev, N.N. Nikonov, and N.S.Kozochkin (1945-1947). However, due to definite circumstances, he was not able to finish it, and returned to Saransk, and later moved to Chelyabinsk (1951).
END_OF_DOCUMENT_TOKEN_TO_BE_REPLACED