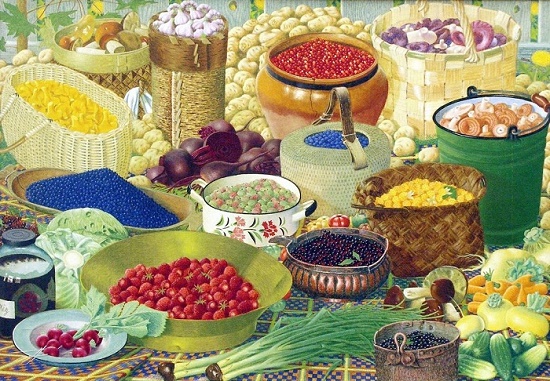 Soviet Russian artist Georgy Ivanovich Popov
The peak of popularity of talented artist Georgy (George) Popov in the Soviet Union fell on the 1970 – 1980s. In particular, his works became participants of numerous personal and group exhibitions in museums of the USSR and abroad. For example, his famous still-life “Generous Earth” (Vologda Regional Picture Gallery), which appeared in a variety of publications, became a textbook. In fact, the painting became a kind of symbol of the entire Vologda region. Nowadays, reproductions of this picture are in the school textbooks of the series “Origins”. Interestingly, Georgy Popov is a self-taught artist, as he did not finish any art school.
However, Georgiy Ivanovich began his creative life as a poet. Once, Russian poet Nikolai Rubtsov, after reading his “Poem of Love,” said: “Talentedly written!”
END_OF_DOCUMENT_TOKEN_TO_BE_REPLACED 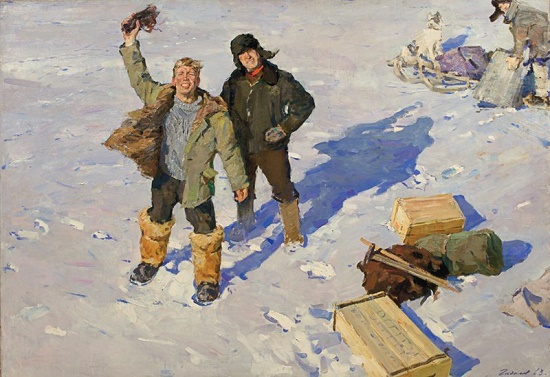 Born 29 August 1935 in the city of Ordzhonikidze, Chechen-Ingush autonomous region, Oleg Sergeevich Gadalov belonged to the Gadalov family, one of the most famous merchant families in the Yenisei province of Siberia. Aged 14 the boy entered the Central Art School at the Academy of Arts of the USSR. After graduation from the art school, in 1956, he entered the painting faculty of the Institute of Painting, Sculpture and Architecture. I.E. Repin of the USSR Art Academy. There he studied in the workshop of a prominent Soviet artist Yuri Neprintsev (1956-1963). Created by Oleg Gadalov diploma painting “Geologists” received an excellent evaluation. In particular, awarded the Diploma of the first degree at the All-Russian exhibition of diploma papers in Moscow.
Member of the USSR Union of Artists (since the 1960s), he was a permanent participant of numerous exhibitions of Soviet art. In the period of 1973-1977 he worked in the studio of the seamen of the Navy at the Central Naval Museum in Leningrad. The artist visited the Barents Sea, the city of Severomorsk, and even participated in a hike to Italy on the training ship “Smolny.” The result of the missions were sketches, created on the basis of direct observations.
END_OF_DOCUMENT_TOKEN_TO_BE_REPLACED 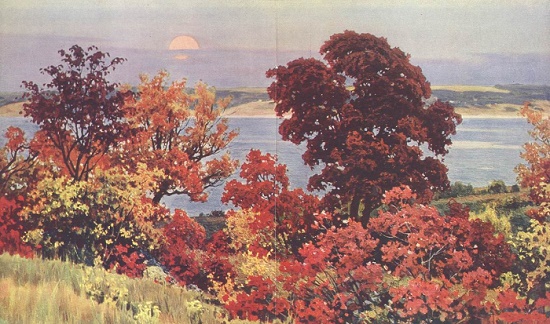 Soviet artist Boris Valentinovich Shcherbakov – representative of socialist realism. People’s Artist of the USSR (1986), he was the winner of the Stalin Prize of the third degree (1952).
Known mainly as a landscape painter, Shcherbakov worked in the genre of historical painting, portrait, and still life. Participated in exhibitions since 1939. He received the last Stalin Prize together with a group of artists for the painting “Meeting of the Presidium of the USSR Academy of Sciences.” Also, he was the Corresponding Member of the Academy of Arts of the USSR (1973).
Born March 25 (April 7) in 1916 in Petrograd, Boris Valentinovich Shcherbakov grew up in the family of the artist VS Shcherbakov, a pupil of Ilya Repin. In 1933 he entered the All-Russian Academy of Arts, from which he successfully graduated in 1939. He studied in the workshops of I. Brodsky, V. Yakovlev, and P. Shukhmin.
END_OF_DOCUMENT_TOKEN_TO_BE_REPLACED 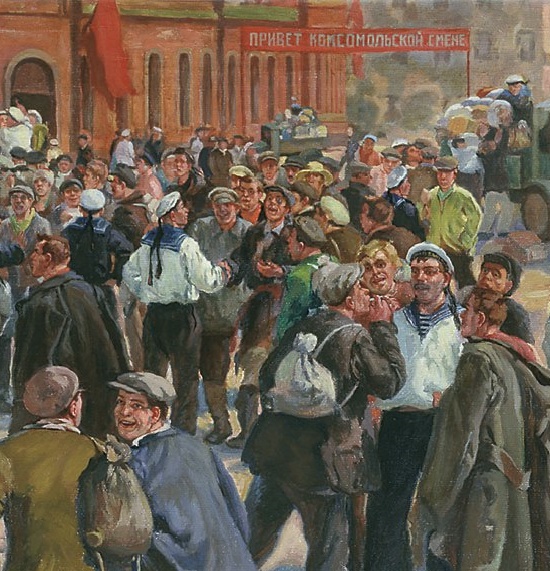 Soviet Russian artist Ivan Georgievich Drozdov
Born August 22, 1880 in the village of Vvedenskoe, Moscow Province, Ivan Georgievich Drozdov – Russian painter, and artist of decorative and applied art. Drozdov painted portraits, landscapes, and everyday scenes. After 1917 he created paintings on the themes of revolutionary history and Soviet life. Member of the Union of Artists (1918), the Association of Artists (1916, 1922), the Society of Artists of AI Kuindzhi (1917-27, with interruptions), Association of Artists of revolutionary Russia (1923-29, in 1924-26 – chairman of the Leningrad branch). Ivan Georgievich Drozdov became the member of the Union of Artists of the USSR in 1932.
He received his original art education in the 1890’s in the icon painting workshop of M. Molov and the Moscow art school of A.P. Bolshakov. Besides, Drozdov studied in Penza art college, workshop of KA Savitsky (1900-1904). In addition, he studied at the Higher Art School of Painting, Sculpture and Architecture, workshops of famous Russian artists VE Makovsky, IE Repin, and VE Savinsky (1904-1910).
END_OF_DOCUMENT_TOKEN_TO_BE_REPLACED 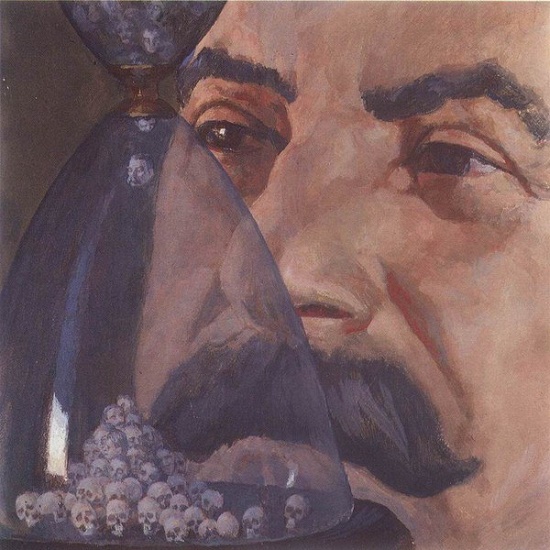 Since the beginning of perestroika and the collapse of the Soviet Union, it has become fashionable to scold the Soviet past in newspapers, from television screens, theater scenes and paintings of artists. The wave of “denunciation and condemnation” swept over Pyotr Alekseyevich Belov as well. So, according to his friends, he seemed to burst out of creating, and one by one began to appear canvases – small in size, but grandiose in their philosophical content and fullness of thought”. However, it is easy to see that all of the artist’s paintings, which metaphorically portrayed Stalin’s repressions, he created in the period 1985-1988. In total, there were 23 paintings in the “anti-Stalin cycle. Of course, they were up to date, on the wave of popularity and used as illustrations to anti-soviet and anti-Stalin articles. Interestingly, in the early 1990s, took place the premiere of the American film “Stalin” in Moscow. The film began with a panorama of the works of Pyotr Alekseyevich Belov.
Meanwhile, Pyotr Alekseyevich Belov (October 17, 1929 – January 30, 1988), Honored Artist of the RSFSR (1978), member of the USSR Union of artists (1974-1988) was mainly a theater artist.
END_OF_DOCUMENT_TOKEN_TO_BE_REPLACED 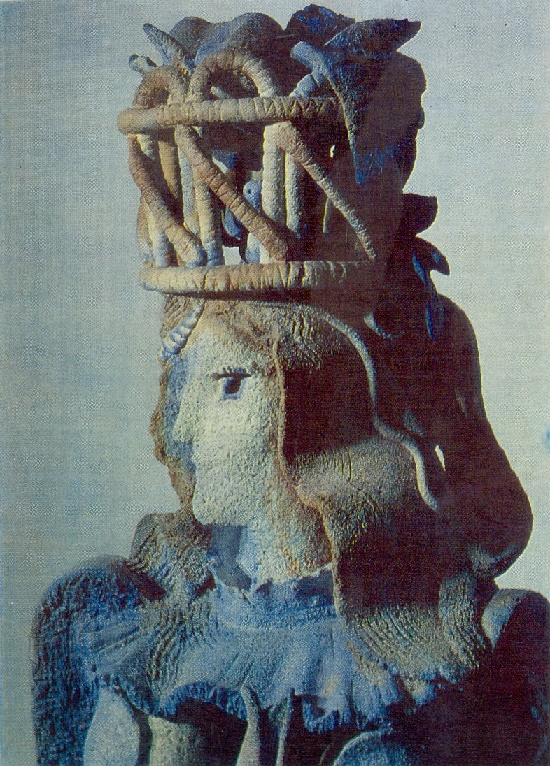 Soviet Russian ceramic artist Mikhail Kopylkov
Born in 1946 in Leningrad, Mikhail Kopylkov graduated from Leningrad Higher Art and Industrial School named after Vera Mukhina (1969). He joined the USSR Union of Artists in 1975.
Annual exhibitions “One Composition” were of great importance for the history of Soviet Leningrad ceramics, the first of which took place in 1977. According to the charter, the artist could put out only one work, which he chooses himself. A month later, a large exposition “Ceramics of Leningrad” became the first serious review of Leningrad ceramics in the last five years. Criticism rated it as one of the most interesting phenomena in decorative art. The notion of “school of Leningrad ceramics” appeared.
Meanwhile, since the beginning of the 1970s, a group of young artists-ceramists, graduates of the Leningrad Higher Art and Industrial School has been actively working in the city on the Neva. In particular, A. Zadorin, N. Savinova, V. Gorislavtsev, V. Tsyvin, L. Solodkov, N. Gushchina, O. Nekrasov-Karateeva and others. Among them one of the brightest figures was Mikhail Kopylkov.
END_OF_DOCUMENT_TOKEN_TO_BE_REPLACED 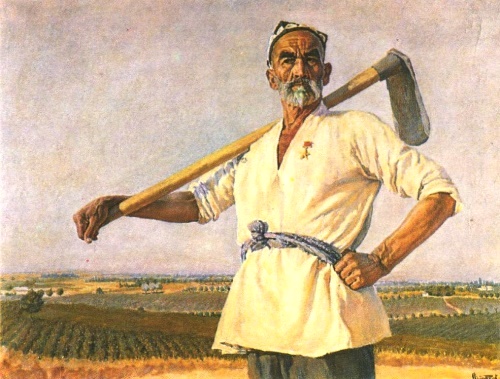 Honored Art Worker of the Uzbek SSR Abdulkhak Abdullayev was born in 1918 in the city of Turkestan. The boy showed his art abilities very early. “I was very fond of animals,” recalls the artist. He watched them with interest, recognized their habits, character, and then tried to depict them. Sometimes molded them out of ordinary clay or painted them on the wall of the house. Such were the first steps of the future artist in the art. In 1928, the boy entered the school of K. Liebknecht in the village of Lunacharsky, located near Tashkent.
Pupils of this school, along with other subjects, got acquainted with the basics of drawing. The artist recalls that these lessons were for him the most fascinating. Abdulhak spent his free time after school drawing. The successes of the young artist in this subject attracted the attention of the teachers of the school. And, first of all, AP Grintsevich, who in every possible way strove to support Abdulhak’s desire to “study as an artist”.
END_OF_DOCUMENT_TOKEN_TO_BE_REPLACED