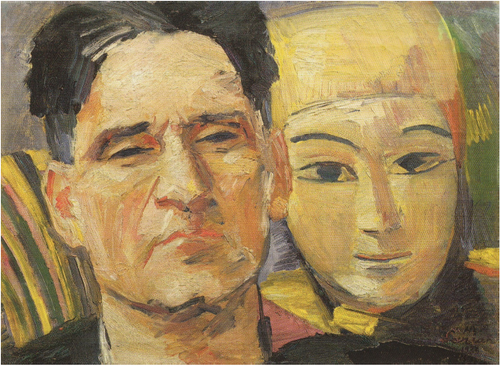 Soviet Armenian artist Martiros Saryan
According to the artist himself, in his long life, he experienced a lot of grief and a lot of fun. He witnessed two world wars, and fought against the worst enemy of mankind – fascism. In the Soviet Army in the Great Patriotic War fought his son. The artist has painted dozens of portraits of war heroes. Saryan lived through the death of his beloved son, the death of many of his paintings. I do not know the artist more sunny than Martiros Saryan. And the bright, sparkling view of the world, a striking sense of light and color and love for his native Armenia, he had inherited from his parents, because he was born and raised in Russia. He studied painting in Moscow in the workshops of Soviet Russian artists Serov and Korovin, and only as an adult, twenty-year-old, he first visited the homeland of their ancestors – Armenia. And became sick of this country forever. Despite the fact that he had to go to Cairo and in the sultry and mysterious Tehran and multifaceted Constantinople, lived and worked in the Mecca of artists – Paris, he has always been irresistibly drawn to his homeland. 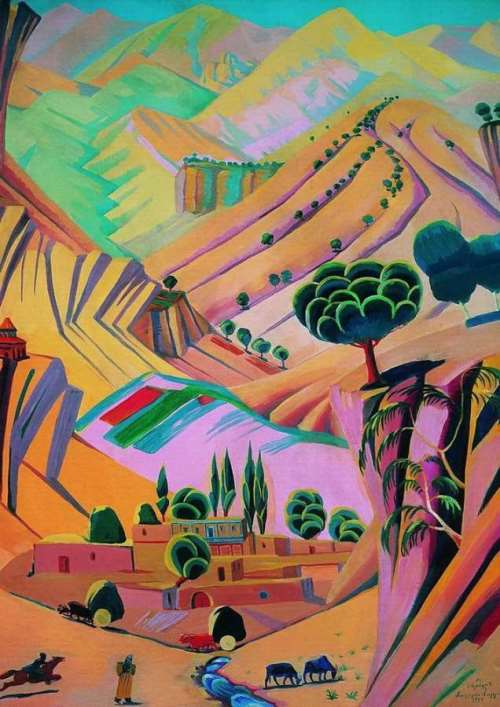 So, skipping his fortieth milestone known and established artist, he receives an invitation from the Chairman of the Armenian Council of People’s Commissars to live and work in a place that was so attractive to him all these years. Now, many years, the cool waters of Lake Sevan, the snowy peaks of Mount Ararat and Aragats, juicy fruit of Ashtarak, Echmiadzin ancient stones, become an inexhaustible source of inspiration for the painter – he created dozens of paintings, filled with the light of his native land. What could be more beautiful than coming home after a long and difficult journey?

World famous artist said about himself: “For centuries, the Armenians were forced to live away from home, but wherever they stopped, they created a small Armenia. At the end of the XVIII century, Armenia became a New Nakhichevan, now Proletarian District of Rostov-on-Don. My ancestors came to the banks of the Don from the Crimea, and to the Crimea – from medieval Armenian capital of Ani. I was born in a patriarchal family. There were nine children, I was the seventh”. 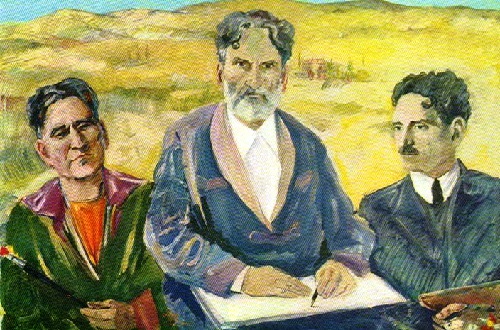 In 1920, Soviet power established in Armenia, Saryan came home for good. About the continuity of his relations with the native land tells his famous self-portrait “Three Ages”. On the right side of the canvas Saryan painted himself young. The left part of it – in the middle age, firmly aware of his purpose. In the center – a wise old man.

Mountain march of Armenian national units. 1933. Oil on canvas. Central Museum of the Armed Forces of the USSR

To the Armenian soldiers, veterans of the Great Patriotic War. Flowers. Oil. 1945

Sketches of scenery for the opera by A.L. Stepanian ‘Brave Nazar’. Watercolor. Armenian Theater of Opera and Ballet. Yerevan. 1935

Illustration to the poem by Ferdowsi ‘Rustam and Sohrab’. Ink. 1934

Emblem of the Union of Armenian artists. Ink. 1916

The collective farm of Karindzh village

In the mountains of Tumanyan

1938 collection of peaches on the farm in Armenia. Canvas, oil

To the Armenian soldiers, veterans of the Great Patriotic War. Flowers. Fragment. Oil. 1945