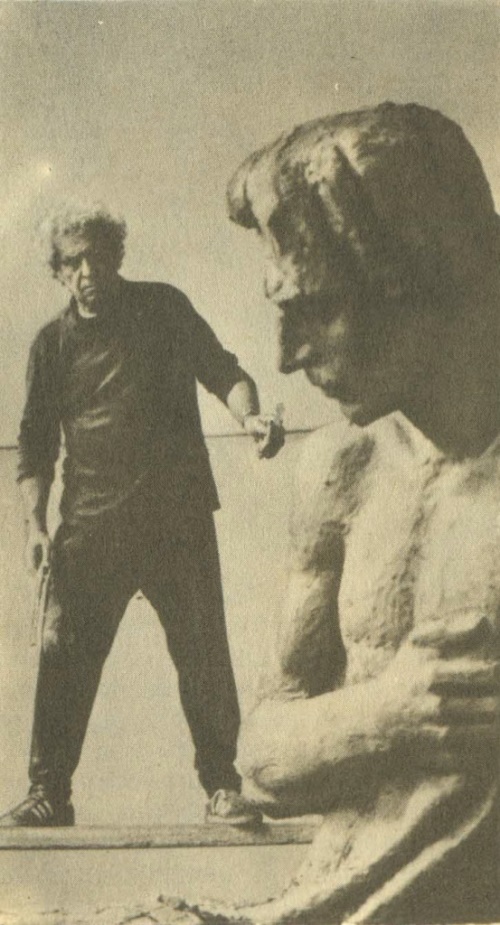 Soviet Armenian sculptor Nikolai Nikogosyan (born 1918) working on a model of the monument to the poet Vahan Terian. 1986

Works of Soviet Armenian sculptor Nikolai Nikogosyan entered the “golden fund” of Soviet art. They are in the Russian Museum, the Tretyakov Gallery, Moscow Museum of Modern Art, Museum of Fine Arts of Karelia and other regional museums in Russia, as well as in the State Art gallery of Armenia, in the art museums of former Soviet Union – Belarus, Kazakhstan, Latvia, Lithuania. Nikolai Nikogosyan – painter, graphic artist, teacher, People’s Artist of the USSR (1982), Winner of USSR State Prize (1977). Corresponding Member (1983) of the USSR Academy of Arts, Academician of Russian Academy of Arts (2001). Nikolai Bagratovich Nikoghosyan was born December 2, 1918, in the village of Shagrar (now Nalbandyan) in Armenia. In 1930-1940-ies N.B.Nikogosyan got an excellent education – first at the Institute of Painting, Sculpture and Architecture of All-Russian Academy of Arts in Leningrad, and later at the Moscow Art Institute of Surikov (workshop AT Matveyev). Since 1985, he taught at the Faculty of Architecture plastics, since 1998 professor. In 1940, the artist began to participate in exhibitions, in 1942 he joined the USSR Union of Artists. In 1956 he represented the country at the XXVIII International Biennale of Contemporary Art in Venice. 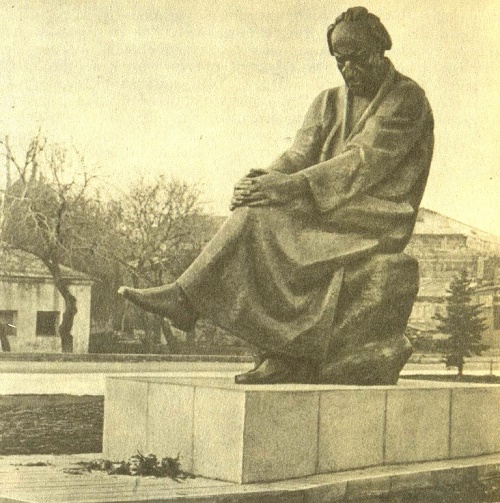 Powerful humanistic pathos permeates the artist’s work throughout the phenomenally long professional career. In the history of art, he came primarily as a great master of portraits – created a range of expressive images of his contemporaries. Always at the center of his work – people. Born muralist, Nikogosyan carefully penetrates the spiritual world of man, his psychological characteristics. The easily recognizable creative manner of Nikolay Nikogosyan joined the tradition of the Russian school of realistic sculpture, which he took from his mentor – an outstanding sculptor Alexander Matveyev, and national plastics of Armenia, dating back to the art of the ancient East. Nikogosyan created images full of vital energy, if charged with a deep force of the Earth, which stores a favorite material of the master – stone. 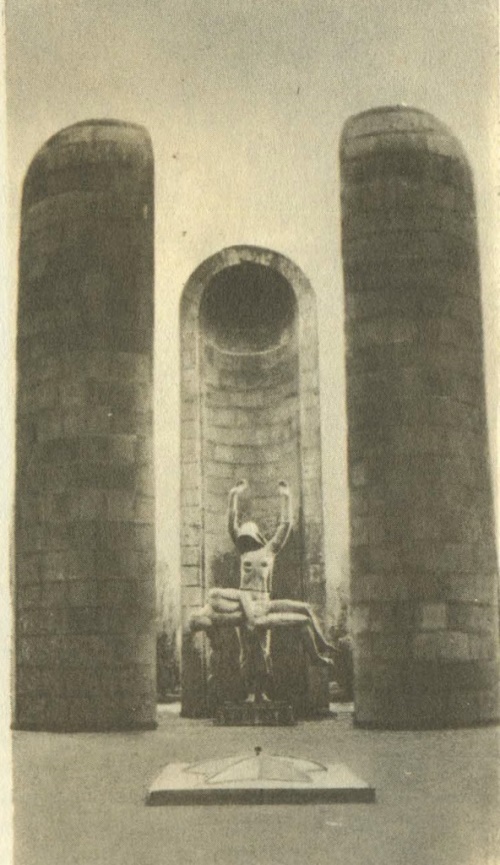 For seven decades, Nikolay Nikogosyan has created an extensive gallery of contemporary portraits, from famous scientists and artists to ordinary workers. Among these works – well-known sculptural portraits of Gorky, G.V.Sviridov, Shostakovich, Komitas, images of Shirakatsi, the composition “Maya Plisetskaya,” “toilers of the Ararat Valley.” 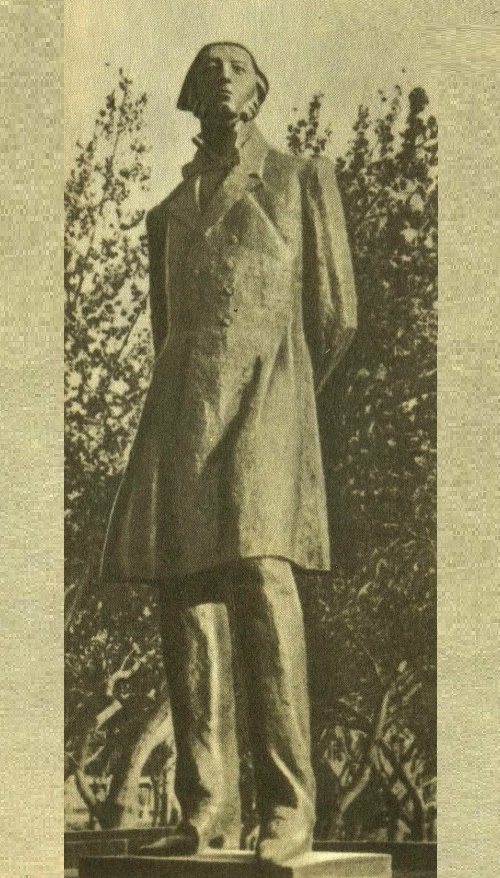 Inherent by maestro monumental gift manifested in easel art, and numerous monuments of his work, and in the works of the memorial genre. N.Nikogosyan performed a number of outstanding works of monumental sculpture: the monuments of Avetik Isahakyan in Leninakan (now Gyumri), Yeghishe Charents in Yerevan and elsewhere, as well as decorative figures on the facade of a high-rise building on now Kudrinskaya street in Moscow and on the facade of the Palace of Science and culture in Warsaw. The sculptor created a plaque of Meyerhold in Moscow, S. Marshak tombstone at the Novodevichy cemetery, and other tombstones and memorial plaques. 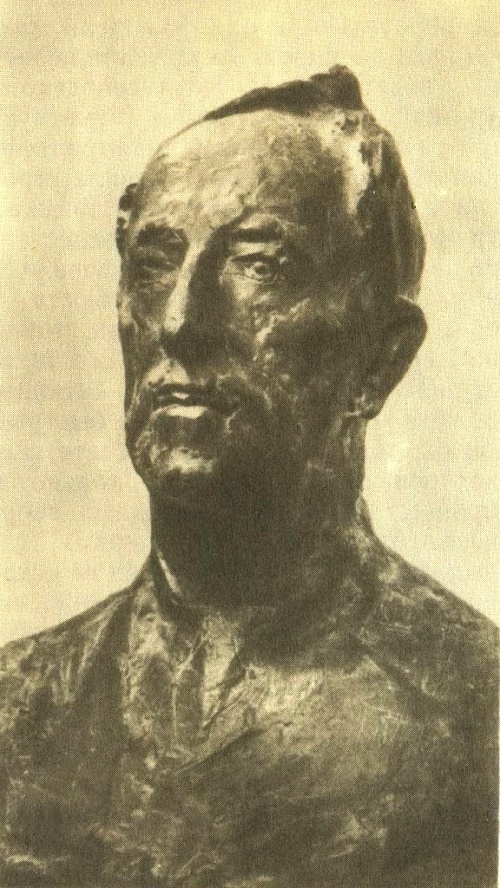 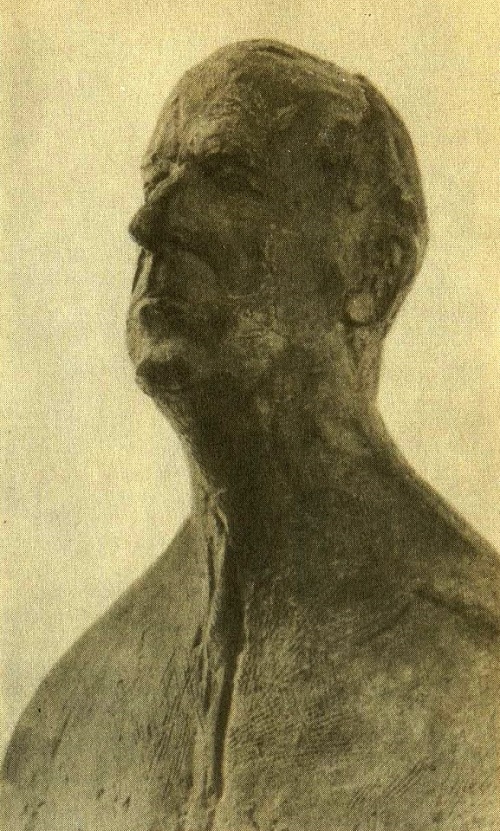 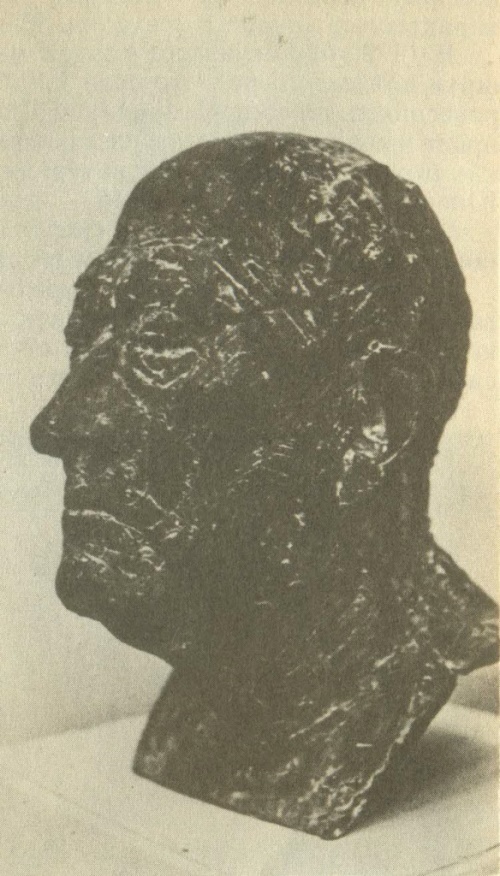 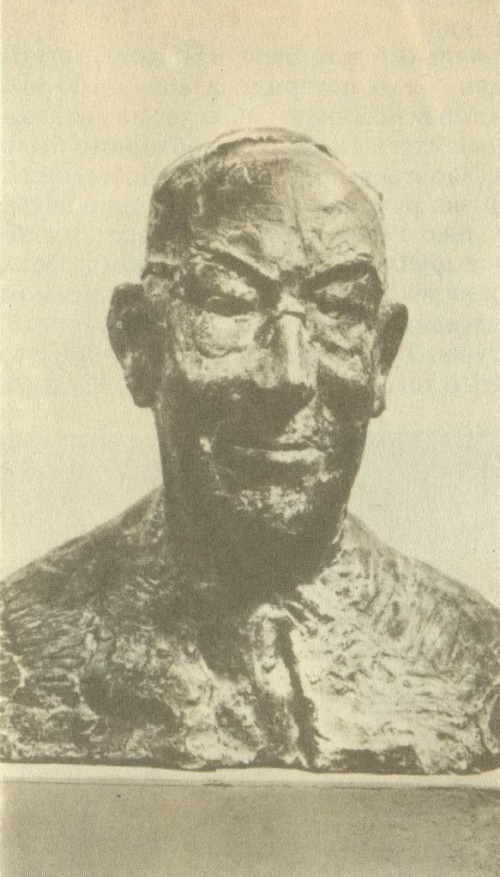 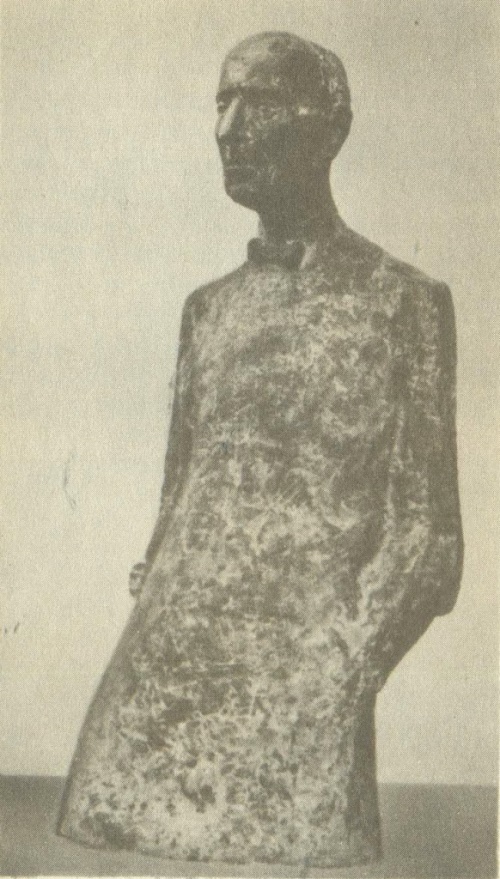 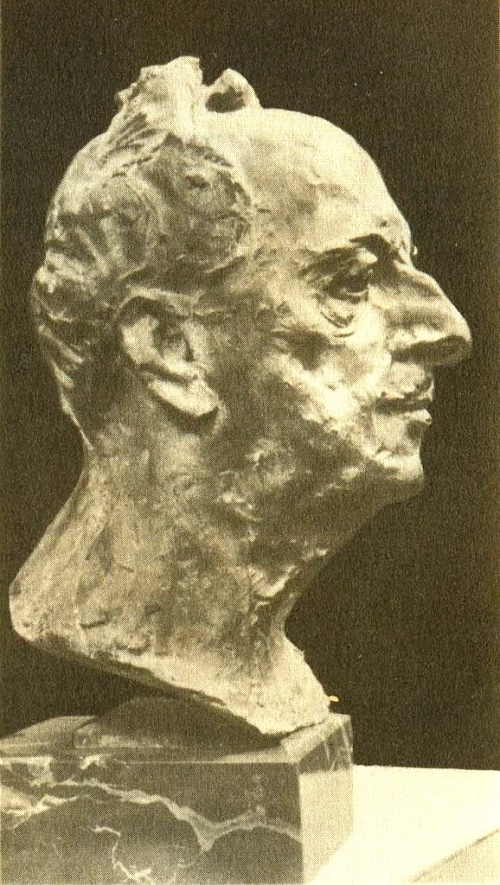 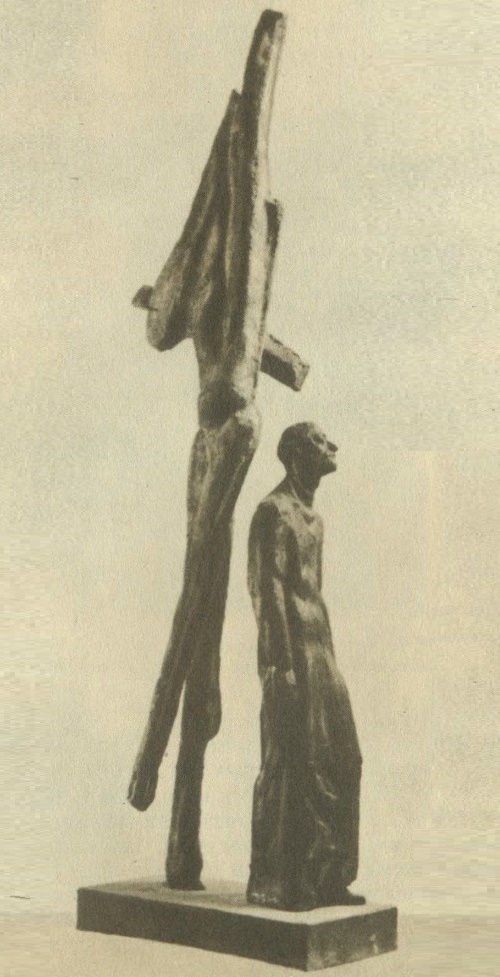 Sketch of the monument to the composer Komitas. 1970s. Bronze 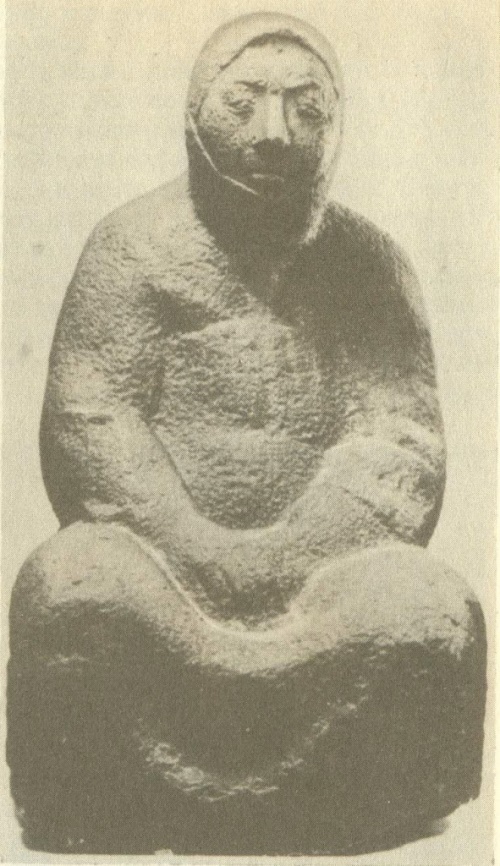 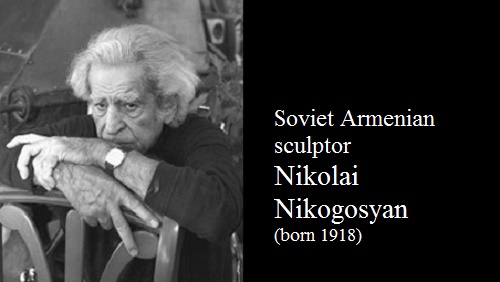 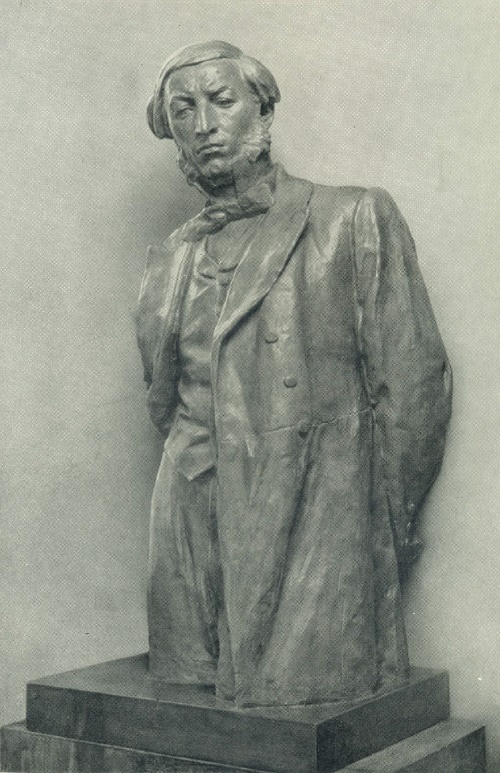