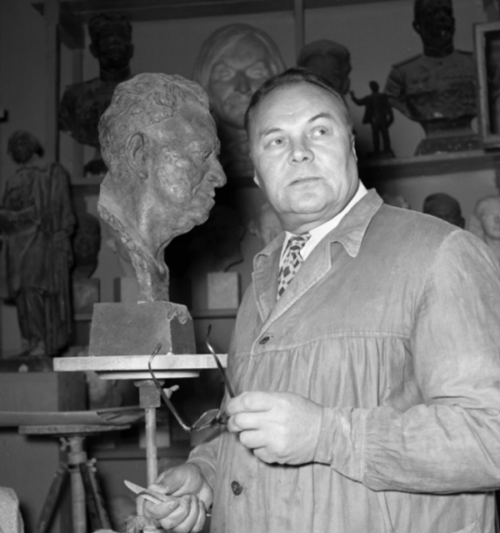 In 1912 he graduated from a four-year rural school. Since childhood, he was fond of drawing, but then he did not even have to dream of a special art education. Simultaneously with his studies, he helped his father in the field and worked with him in the smithy. When, during the First World War, his father was drafted into the army, Nikolai remained the only worker in the family. From the age of nineteen he took part in the civil war in the ranks of the Red Army. In battles with the White Poles, he was wounded. 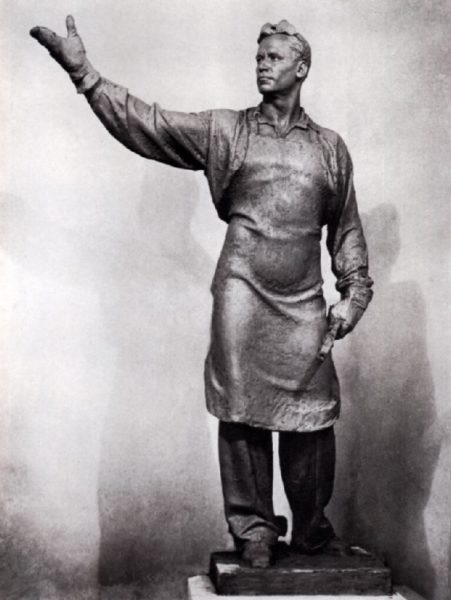 After Nikolai Tomsky recovered, he was left to work at the Old Russian military registration and enlistment office. Here he became close to an amateur creative team, participated in amateur performances, enthusiastically wrote posters and posters, and also painted a lot and diligently of his friends and acquaintances. The artist Vasily Svarog drew attention to his drawings, who advised the young man to take art seriously. 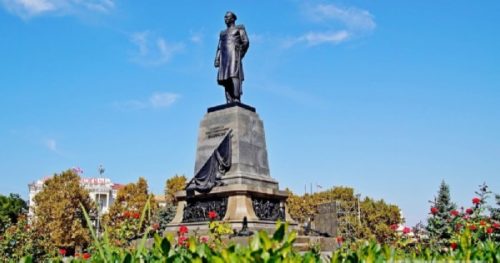 After demobilization, Nikolai Tomsky goes to study in Petrograd and enters the Art and Production College (the former school of the Society for the Encouragement of Arts). He studied with the talented sculptor Vsevolod Lishev, a well-educated person, an experienced teacher who paid special attention to his gifted student. Four years spent at the technical school yielded results. Under the guidance of a teacher, Tomsky not only mastered the basics of professional skill, but also prepared for independent creative work.

Back in 1925, he created a plaster bust “Portrait of Volodya Ulyanov”, which received a good assessment and was then acquired by the State Museum of the Revolution in Leningrad. After graduating from the technical school in 1927, at the suggestion of Lishev, Nikolai Tomsky, together with him, has been engaged in the restoration of monumental and decorative sculpture in Leningrad for several years. This work helped the creative growth of the young sculptor, enriched him with experience, and aroused deep interest in Russian artistic culture. 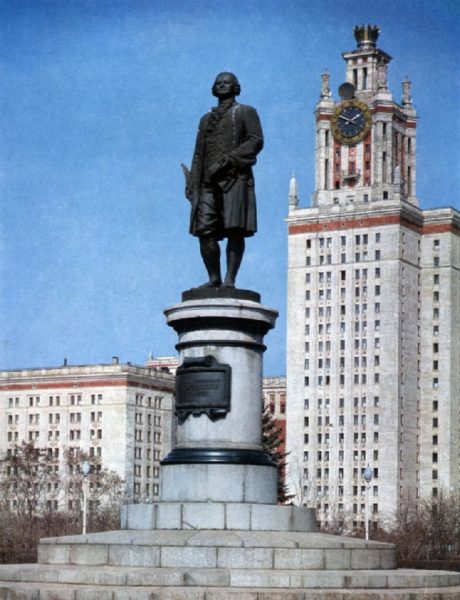 Monument to M.V. Lomonosov in front of the building of Moscow State University on the Lenin (Vorobyovy) Hills in Moscow

Nikolai Tomsky’s first work was a bust of Karl Marx, erected in 1932.

His joint work with the sculptor Vasily Kozlov, the author of the monument to V.I. Lenin in front of Smolny. According to Kozlov’s project in 1932, a monument to V.I. Lenin in Sevastopol. For this monument, Nikolai Tomsky sculpted figures of a peasant and a Red Army soldier, as well as reliefs “The Uprising on the Battleship Potemkin”, “The Flight of the White Guards from Sevastopol” and “The Red Army Crossing the Sivash” (during the Great Patriotic War, this monument was destroyed by the Nazis). At the same time, the sculptor was working on the monument to S.M. Kirov, which was opened in December 1938. For this work, Nikolai Tomsky was awarded his first state award – the Stalin Prize of the USSR.

In 1939, at the all-Union art exhibition “The Industry of Socialism”, among other works dedicated to the image of the Soviet man, a statue of the blacksmith Alexander Busygin, one of the founders of the Stakhanov movement, created by Nikolai Tomsky in 1937, stood out. Alexander Busygin is depicted in a work suit during the production process, at the time of addressing his fellow workers. A strong-willed figure, a natural hand gesture, a focused gaze are simply and convincingly conveyed by the sculptor. 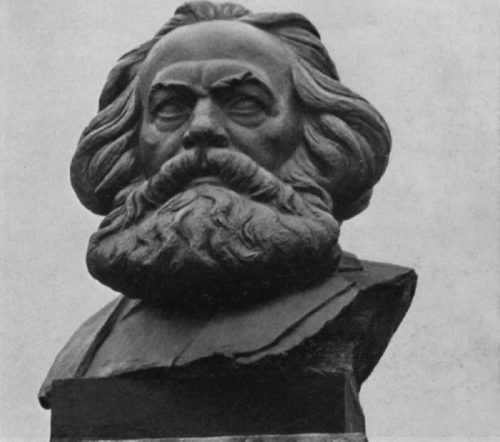 In the work of Nikolai Tomsky in the pre-war years, monumental plasticity prevailed. He carries out projects of the monument to V.V. Kuibyshev (1940) and M.V. Frunze (1941) for Leningrad, a competitive project of a monument to be installed on the site of battles with the White Finns (1940). In 1937 Nikolai Tomsky took part in the competition for the design of the monument-lighthouse to V.I. Lenin for the Leningrad seaport.

In 1942, Nikolai Tomsky was evacuated from besieged Leningrad to Moscow. In 1943, for the Novokuznetskaya metro station, he made sketches of six one-figure compositions on the theme “Front and rear in the Great Patriotic War” (“Tankman”, “Sailor”, “Pilot”, “Partizan”, “Woman with a rifle” and ” Woman with a Shovel “) and relief plaster portraits of Alexander Nevsky, Dmitry Donskoy, Kozma Minin, Dmitry Pozharsky, Alexander Suvorov and Mikhail Kutuzov. 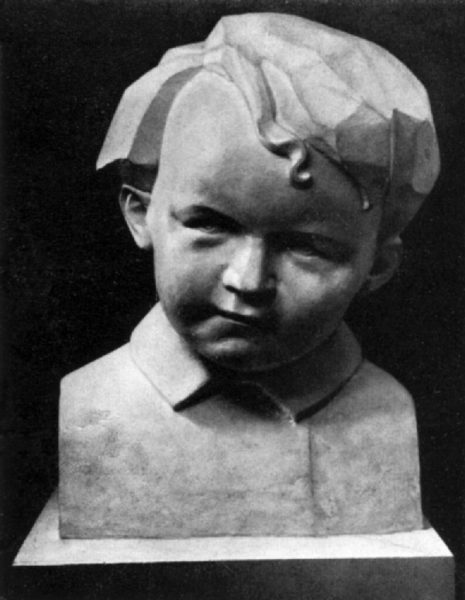 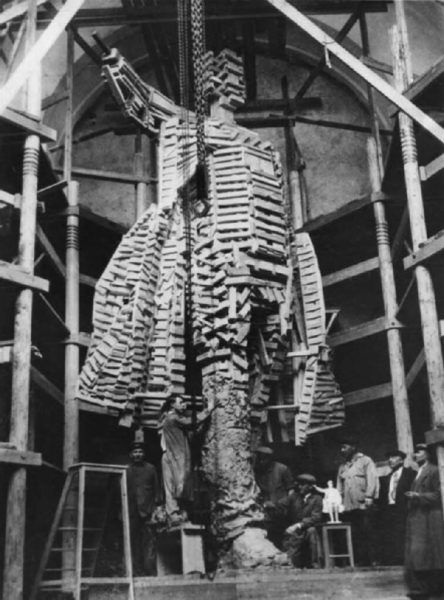 Sculptor Nikolai Tomsky is working on the monument to Kirov 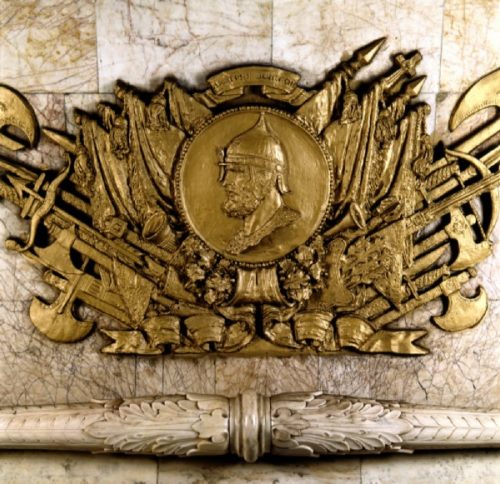 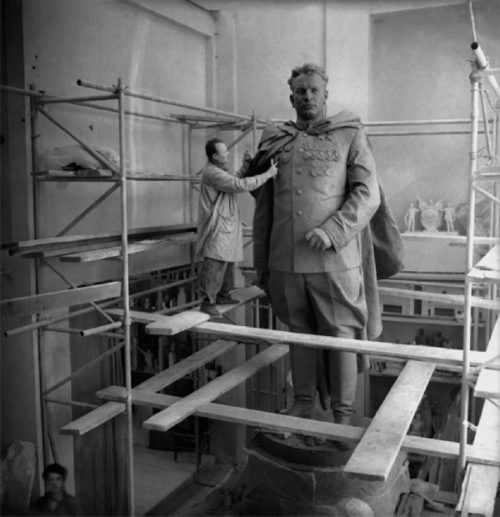 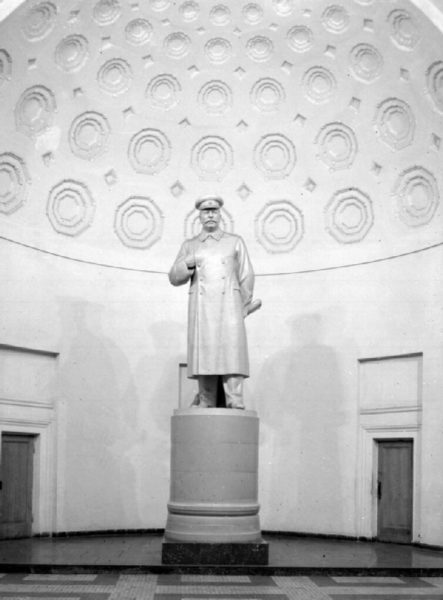 Sculpture of I.V. Stalin in the ground lobby of the Kurskaya-Koltsevaya metro station 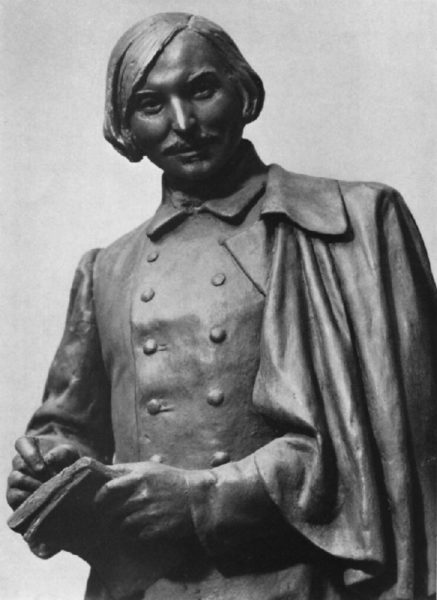 Sketch of a figure for the project of the monument to N.V. Gogol in Moscow. Notebook option