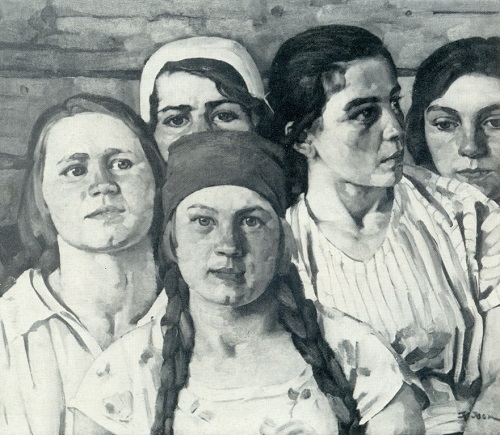 Soviet artist Konstantin Yuon (12 October 1875 – 11 April 1958) was a master of landscapes, portraits, and genre paintings. In addition, he was a theater artist, set designer, and theorist of art. Konstantin Yuon – representative of Symbolism and Art Nouveau, organically continuing traditions in the Soviet era. After the revolution, Yuon was one of the founders of the school of fine arts at the Moscow office of public education.
In 1920 he won first prize for the project of the curtain for the Bolshoi Theater. And a year later he became a full member of the Russian Academy of Artistic Sciences. In addition, he was a member of the Association of Artists of Revolutionary Russia (1925). For a short period, in 1938-1939 he headed the personal studio of the Russian Academy of Arts in Leningrad. In 1940, made the sketch of the mosaic design of the Palace of Soviets. In 1943 he received the Stalin Prize, and in 1947 became a member of the USSR Academy of Arts. 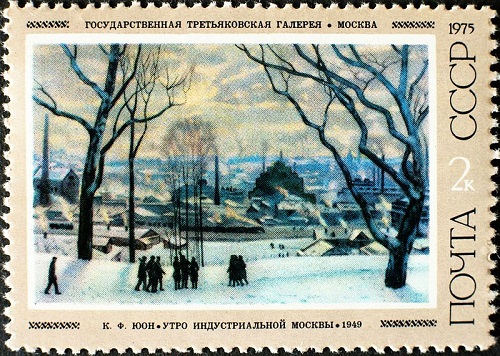 From 1943 to 1948 Yuon worked as a chief designer of the Maly Theater, and got the title People’s artist in 1950. In 1948-1950 he headed the Research Institute for History and Theory of Fine Arts of the Academy of Arts of the USSR. Doctor of Fine Arts. In 1952-1955 he taught at the Moscow State Art Institute of Surikov, professor. Since 1957 – the first secretary of the Union of Artists.
Brushwork of Yuon formed under the influence of Russian artist Konstantin Korovin and Valentin Serov. Yuon participated in exhibitions of the Moscow Association of Artists (1899, 1902), the Association of Traveling Art Exhibitions (1900), and “World of Art” movement (1901, 1906). Since 1903 he has been a regular exhibitor of the Union of Russian Artists; and since 1904 – was a member of the “Union” of the Committee. Konstantin Yuon worked primarily as a landscape painter, and was well known for Moscow and St. Petersburg public. In the late 1900s – early 1910s designed for the operas of Diaghilev’s Russian Seasons in Paris. 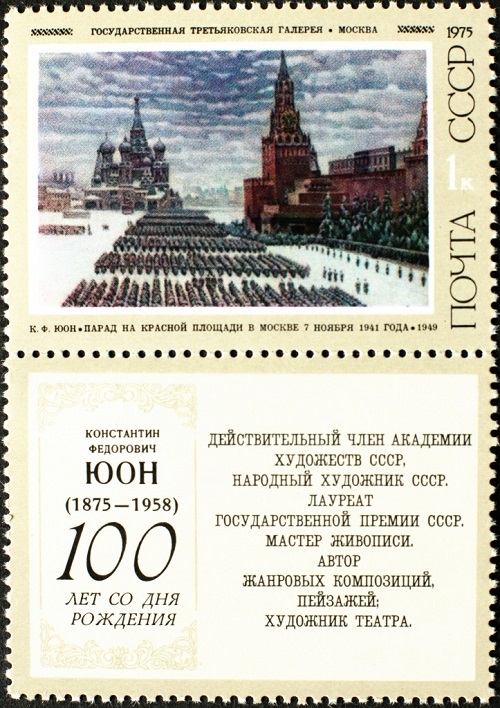 After the revolution, the individual artist’s handwriting changed little, but the range of subjects became slightly different. Thus, in the 1920 – 1950 Konstantin Yuon has created a series of portraits and paintings on the themes of the history of the revolution and the contemporary life, which adhered to the realist tradition.

1965 Postage stamp on the painting by K. Yuon ‘Moscow salutes’ from the series ’20 Anniversary of Victory of the Soviet people in the Great Patriotic War of 1941-1945, called ‘Victory Salute’, The State Art Museum of the Lithuanian SSR in Vilnius. 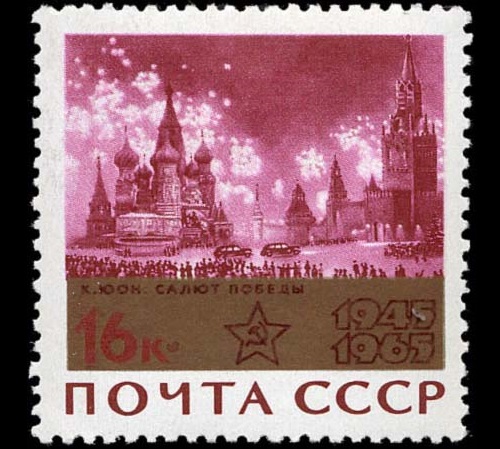 Postage stamp of the USSR, 1965, on the painting by K. Yuon ‘Moscow salutes’ 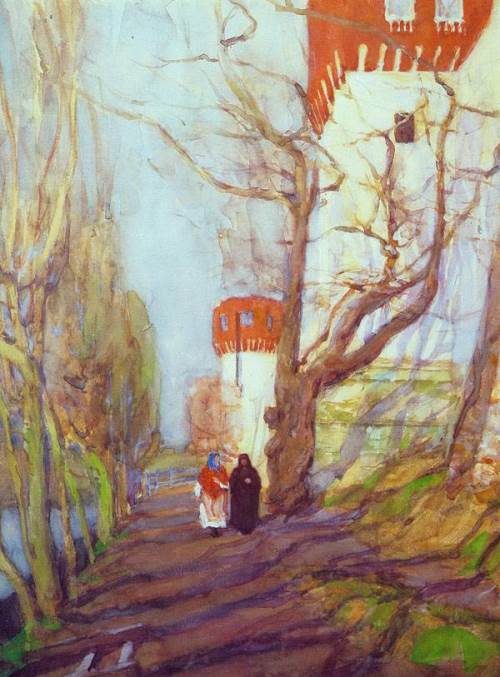 1900 the Novodevichy Convent in the spring. Paper, watercolor, ink 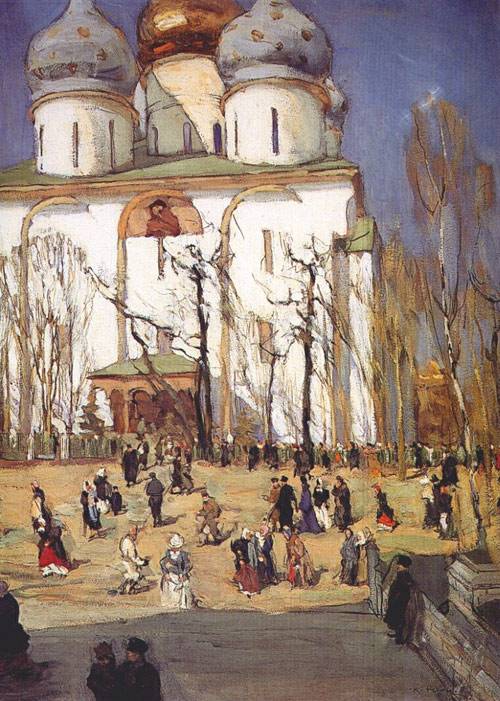 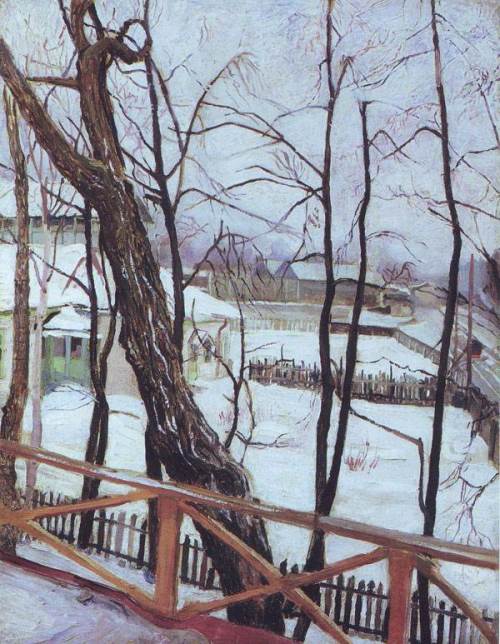 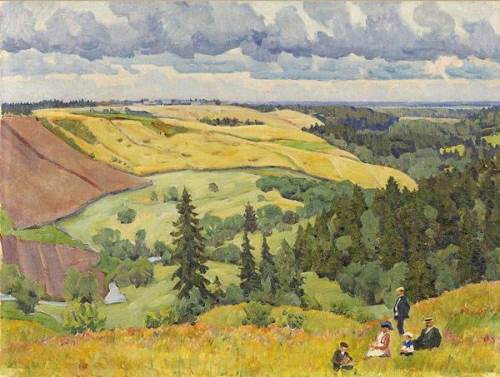 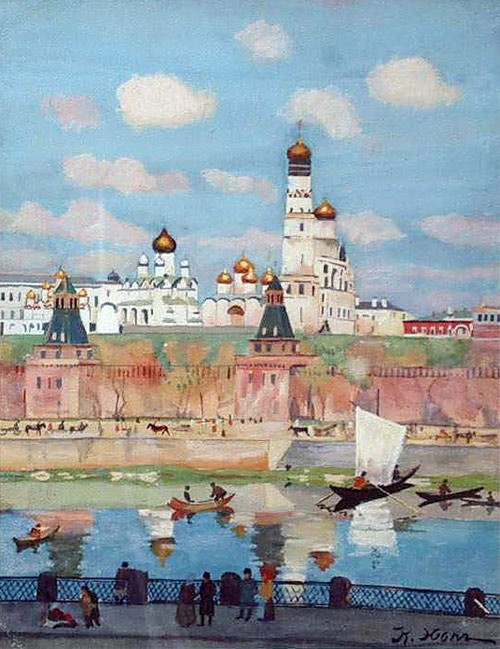 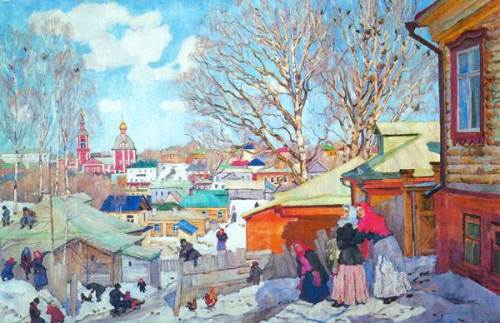 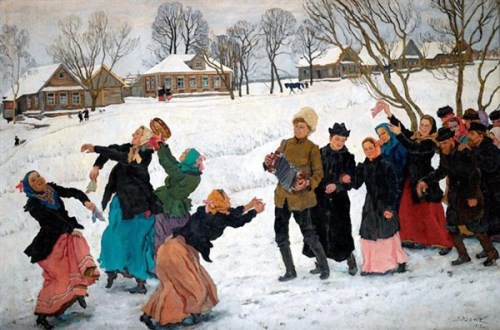 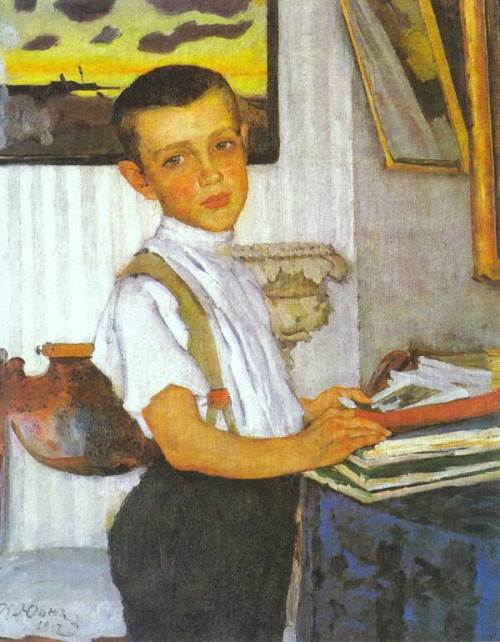 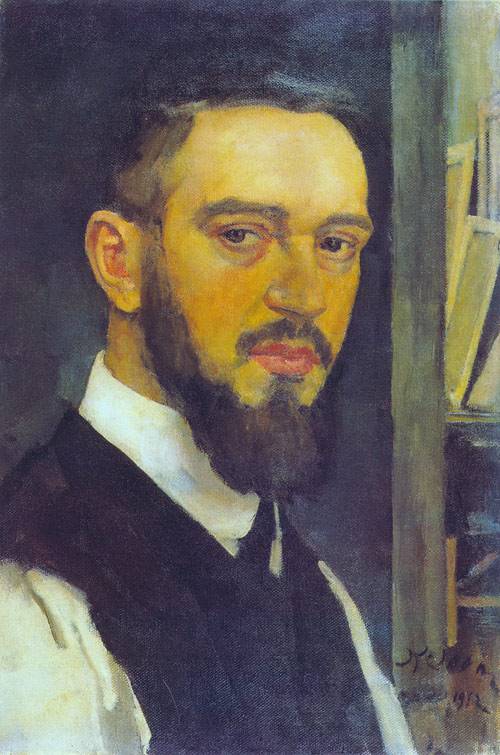 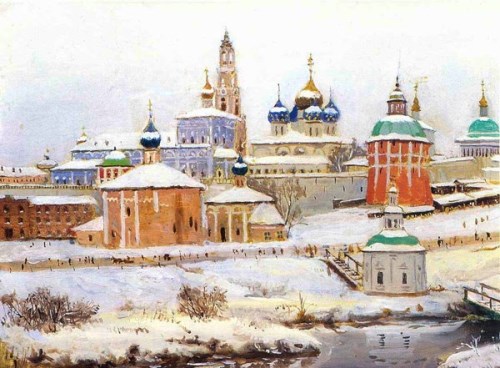 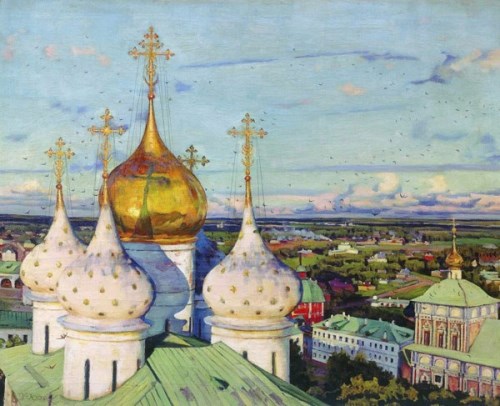 1921 Domes and Swallows. Assumption Cathedral of the Trinity Lavra of St. Sergius, Oil on canvas 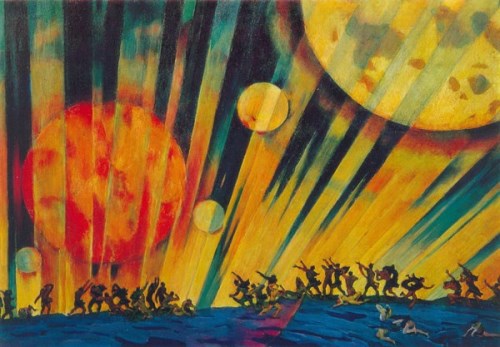 The new planet. 1921. Tempera on cardboard 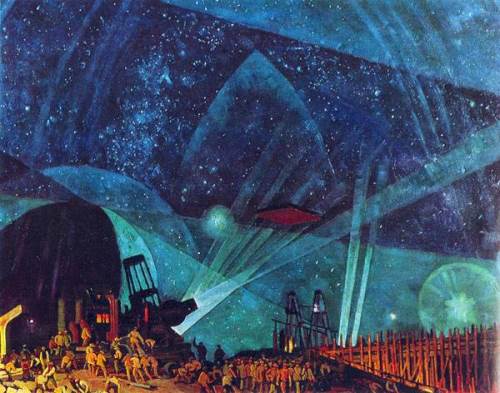 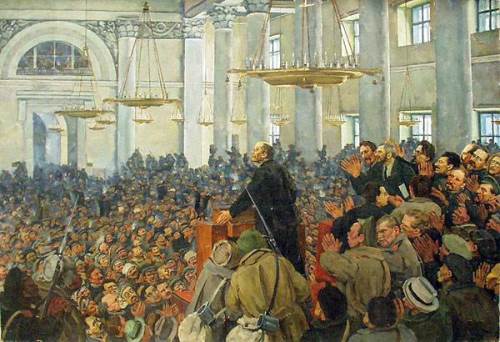 1927 First appearance of Lenin at a meeting of the Petrograd Soviet in Smolny, October 25, 1917 Oil on canvas 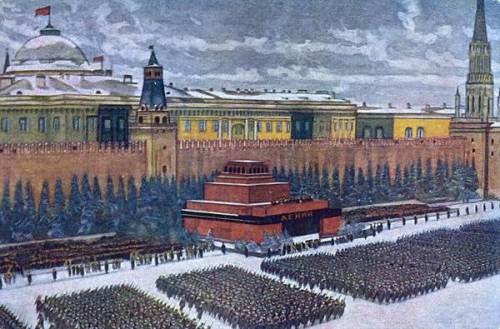 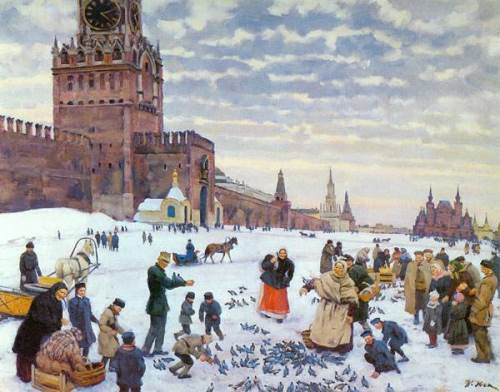 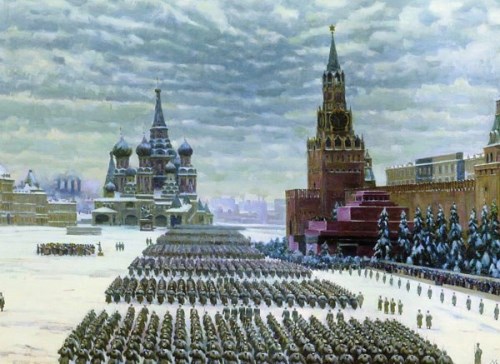 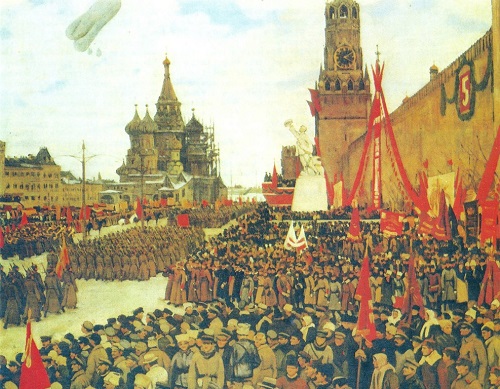 Parade of the Red Army. Oil. 1923. The State Tretyakov Gallery 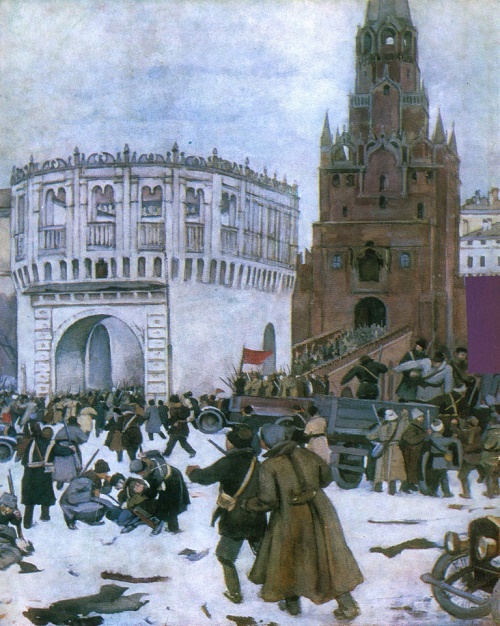 Before entering the Kremlin at Trinity gates. November 2, 1917. Watercolor. 1927. Detail. Central Museum of the Revolution 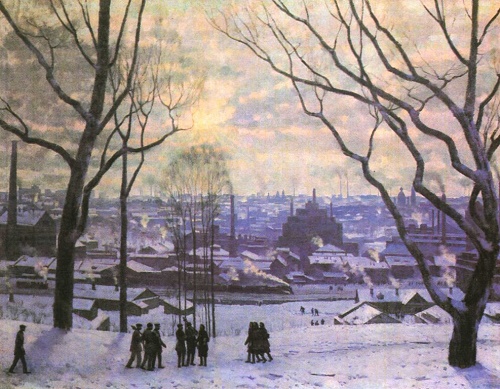 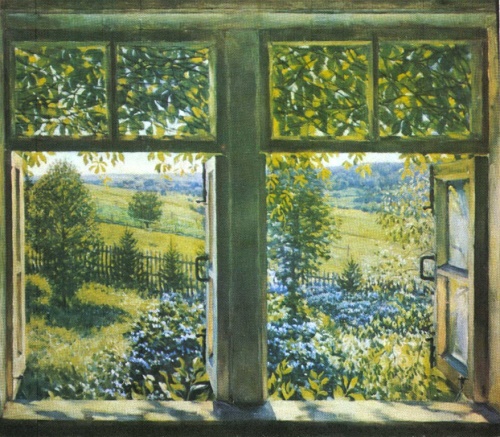 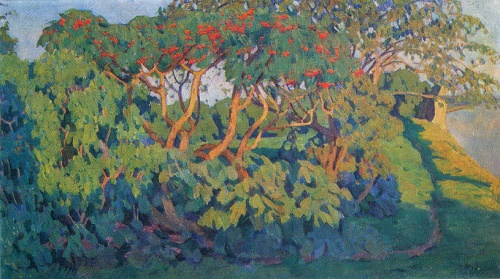 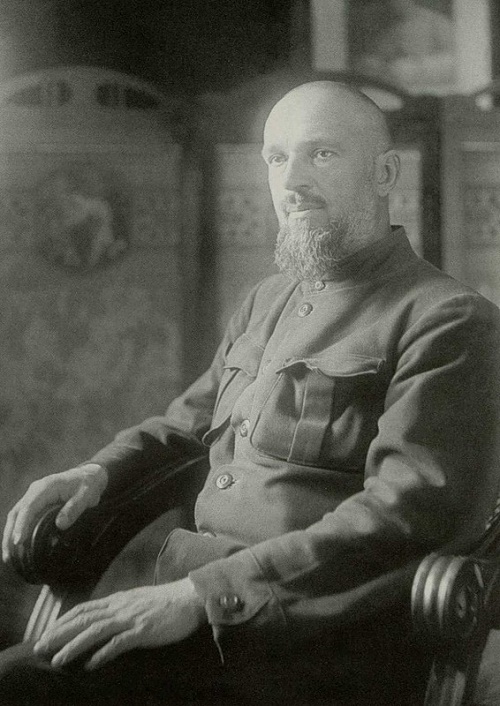 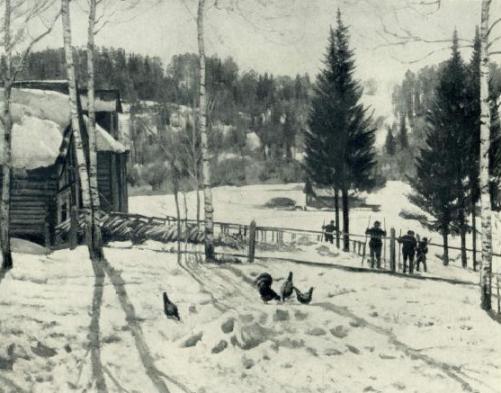 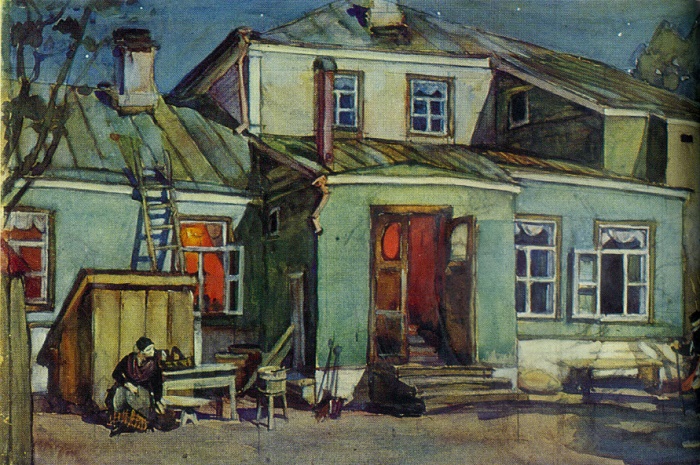 A sketch for Gorky’s play ‘Egor Bulychev and others.’ Moscow Art Theater named after Gorky. Moscow. 1934