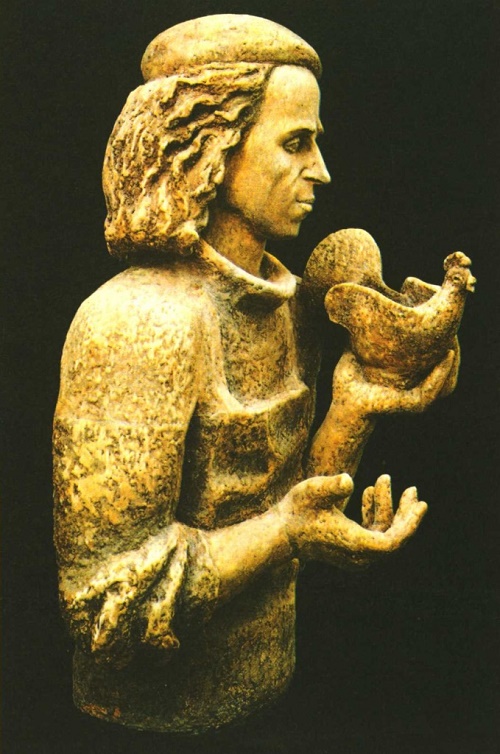 Soviet sculptor Lyudmila Yelchaninova was born and raised in Moscow. Since childhood, she loved to draw, mold toys, paint, dress up and decorate them. Lyudmila’s mother, seamstress, sew theater costumes, decorated Russian folk clothes with embroidery, and accustomed her daughter to needlework. Maybe these first lessons echoed over time in the work of the artist, in her love for color, adherence to all man-made, hand made good craftsmen. And now in her shop carefully preserved objects of folk life, ancient peasant clothes, arts and crafts. After graduation Yelchaninova moved to Smolensk. Teaching students sculpture and ceramics, she worked hard, took part in the exhibitions, raised a daughter. In 1973 she joined the USSR Union of Artists. 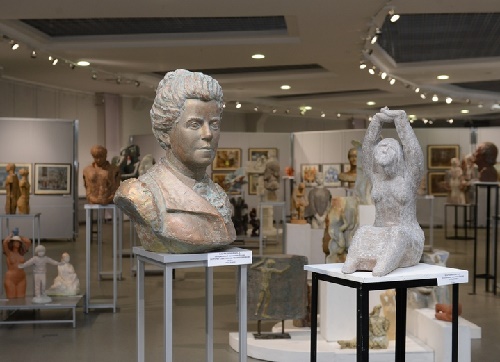 Exhibition of works of L. Yelchaninova

In the workshop of the sculptor – ready-made sculptures, full-scale sketches, sketches of compositions close to the end and barely outlined. “It is impossible to predict the rest of this or that work, – says the artist.- Sometimes the future composition seems clear, in detail, and in one session is possible to do everything. But more often I have to remodel again and again, sculpt many intermediate options in search for a single plastic formula”. 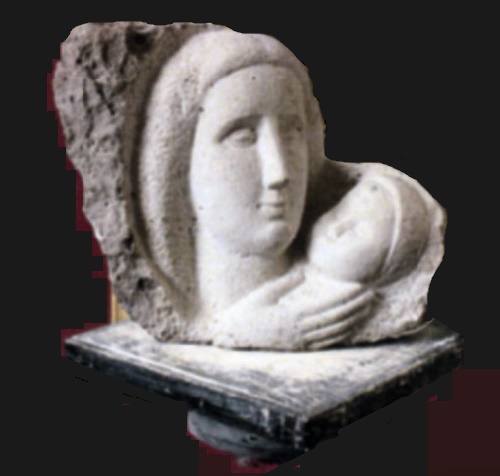 Among the favorite works of Yelchaninova – the image of a woman and child. The images created by her, are filled with poetry and joy of motherhood, a sense of responsibility for the future of children. The main motive of the sculptural group “Family” was found already in the sketch: semicircles of parental hands entwined around the child. The nature of the male figure – a sharp, angular, laconic. In the plastic of the female figure dominate rounded shapes, smooth melodious lines. The compactness of the composition, the free flow of volumes and masses, fusion of silhouettes express the idea of ​​spiritual unity and harmony, the pristine purity of feelings. 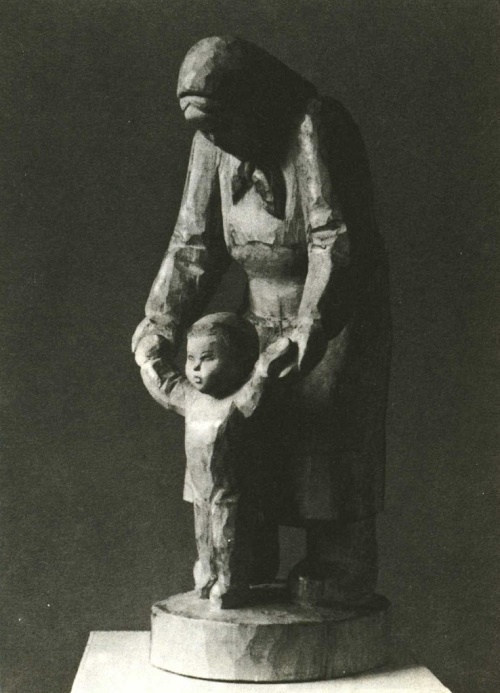 Composition “First Steps” refers to the topic of the succession of generations. Past and future joined in it the most close-knit: grandmother and grandson, kind of root and sprout of a new life. Sunny world of childhood reflected in the bright coloring, as if heaven has absorbed the blue and golden sun.

One of the main creative principles of Yelchaninova – starting from the experience with nature, to go on the path of spiritual concentration on image, to achieve the combination of symbolic and real life to make it recognizable.

Here is what the artist said about her work on the sculpture “Maternity”:

– My first thought about the composition came one summer evening, when I was returning from sketches. The sky was completely covered with black clouds. It began to rain. In front of the bus stop were two darkened figures. Mother covered daughter with a handkerchief, protecting from rain, and the girl bent over a doll. The scene was almost unchanged in the sketch. In a second embodiment added another figure of a very important meaning. She closed the triad of female characters: a grandmother, mother, and daughter. Three Ages, the three-level living in the “Mothers and Daughters” unbroken chain. The idea came from the memory of her mother, who survived the war and didn’t let interrupt thread of generations, could raise children and grandchildren.

Creativity of Yelchaninova is widely known outside Smolensk, where she has lived and worked for many years. Since the mid-1960s she is a permanent participant of All-Union art exhibitions, repeatedly awarded diplomas of the Ministry of Culture and the Union of Artists of the USSR and the Russian Federation. The sculptor’s works are in many museums of the the former Soviet Union, including the State Tretyakov Gallery, as well as in private collections in Russia and abroad. 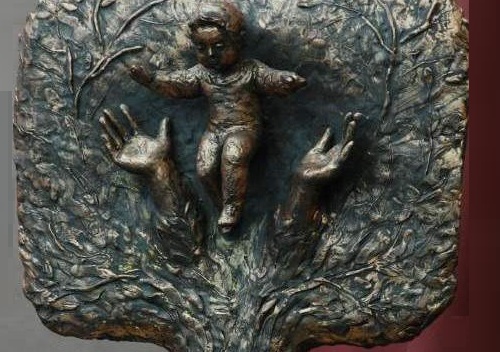 Putting in her art folk traditions and classical heritage, Yelchaninova found her own path in art. Her works show a sensitive touch with reality, a passionate interest in life and people. Creativity of sculptor permeated with the spirit of novelty, variety of quests. 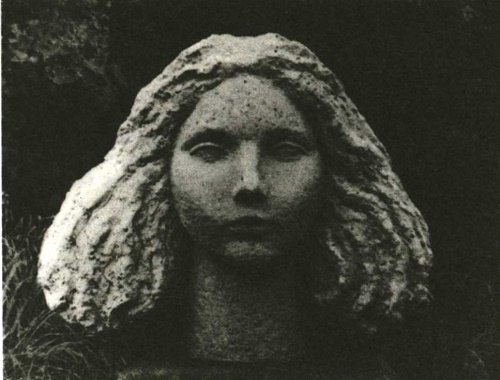 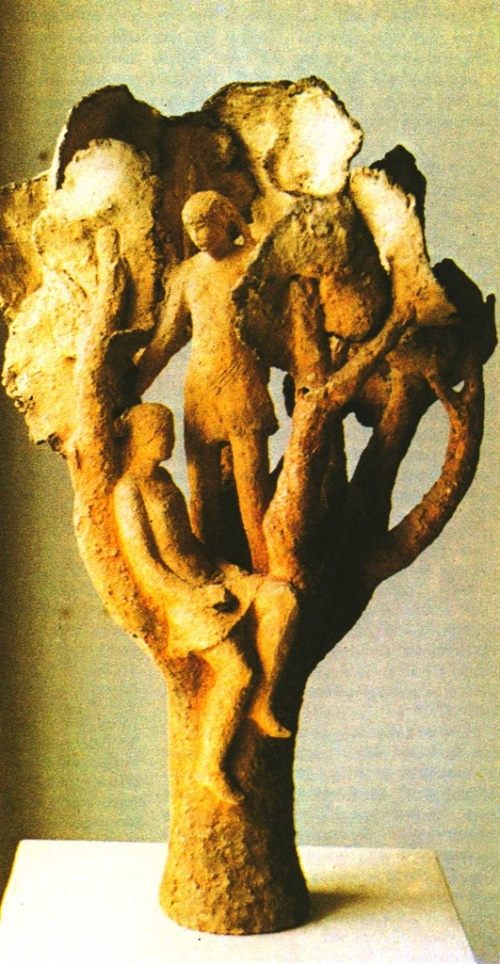 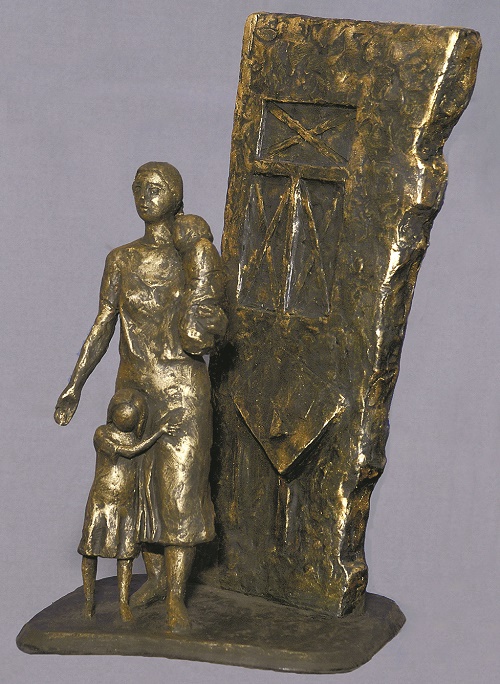 Mother with her children 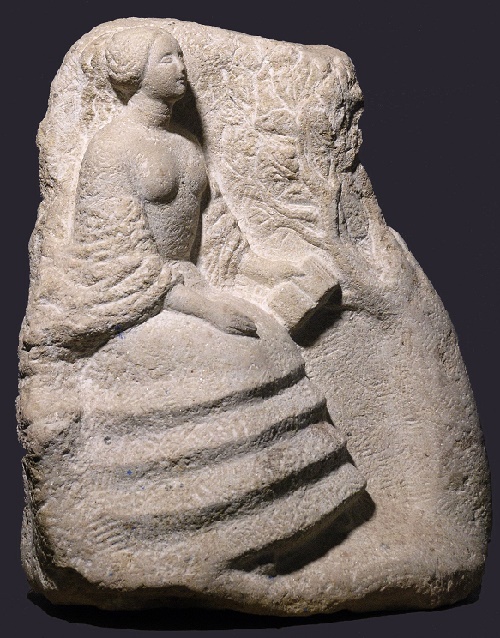 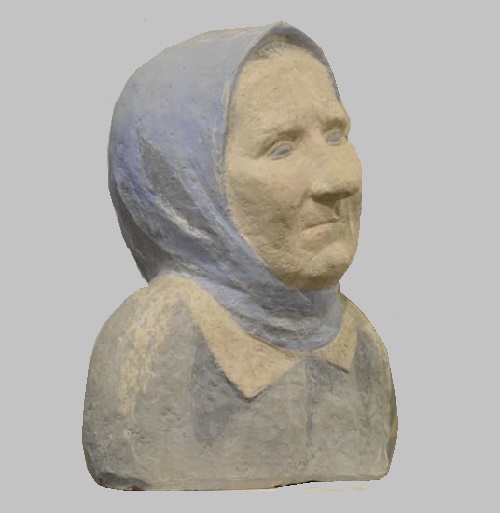 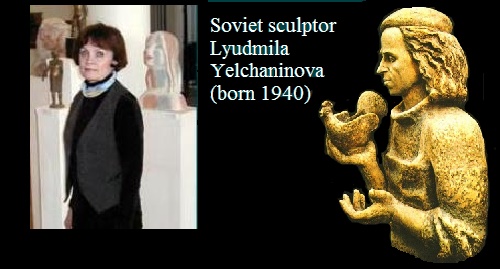