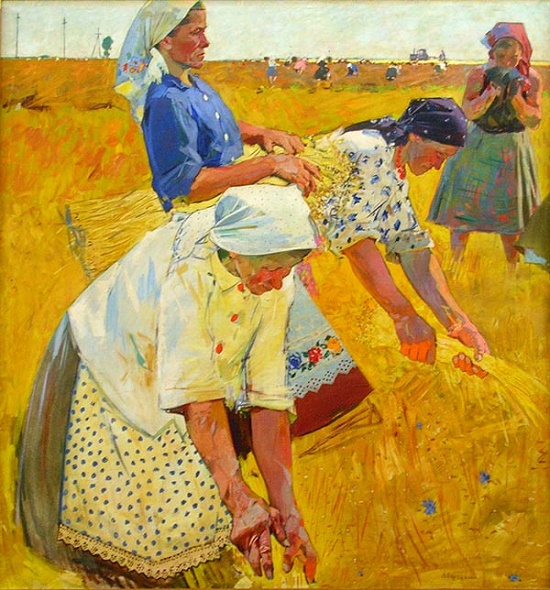 Born in 1925 in the Kharkov province, Viktor Ivanovich Zaretsky – Soviet artist, educator, Veteran of WWII, a member of the Communist Party, a member of the USSR Artists’ Union, and public figure.
Viktor spent his childhood and youth in Donbass in the workers’ settlements of Gorlovka and Stalino (now Donetsk). His father worked as an accountant at the then created chemical production. During the Great Patriotic War (1943-1945) he served in the reserve regiment, and after the demobilization lived with his parents for some time in the village of Obidimo near Tula, Russia. There he took private lessons from the Soviet painter L. Orekhov.
In 1946 Viktor Zaretsky entered the art school at the Kiev State Art Institute, workshop of Gennady Titov. A year later he entered the institute, where his teachers were K. Yelev, M. Sharonov and S. Grigoriev.
As an excellent student, he received Repin and Stalin scholarship. Besides, the diploma picture – “The Line to Lenin’s Mausoleum” – received the highest score. After graduating from the institute in 1953, Viktor Zaretsky began to teach in his Alma Mater.
Since 1955, the artist worked in Donbass. There he created such paintings as “Miners. Shift”, “After the war”, “Hot day”, “Mine yard”, “After the change” and others.

Together with his wife, Alla Gorskaya, he became a well-known figure in the movement of the “sixties”. In the monumental and decorative works of the artist – mosaic panels created in co-authorship with his wife. Accordingly, we see the influence of folk art, characterized by a bright, life-affirming artistic solution.

Meanwhile, in 1978 he opened his own art studio, in which over 200 students studied.
Characterized by the multi-vector stylistic approaches, his creativity was the constant search for the new in the traditional. And early paintings show expressive composition, rhythm and silhouette. After the collapse of the USSR, the artist’s legacy received a wide foreign resonance. In particular, about 30 of his works were presented at Christie’s auction.

A girl in a hat, portrait

A girl in blue

From the series of paintings ‘Spring’

Landscape. From the series of Spring

Milkmaids. Portrait of a Milkmaid N.

Washing in the river