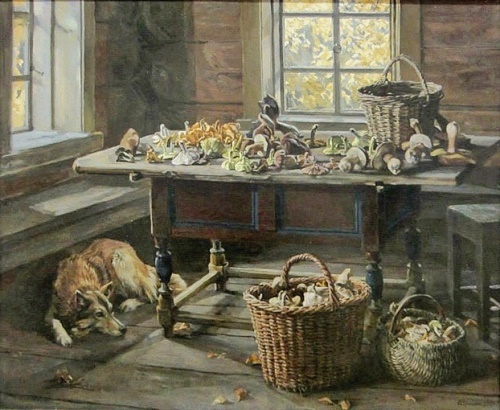 Unfortunately, he lived a short time – thirty-eight years, and from them more than thirty years he drew, sculpted, and painted. In his early childhood Sasha was carried away with modeling of colored plasticine and drawing, depicting heroes of fairy tales and first impressions of the surrounding world. His work attracted attention with vividness and sharpness of characteristics, expressiveness of images.
When for the father of Sasha – People’s Artist of the USSR Alexei Mikhailovich Gritsay – the son’s giftedness became apparent, he began to engage with him regularly. Later, together they went to sketches, spent days in the workshop, often drawing near the sitters. Sasha observed how his father works, and he painted still lifes, landscapes. As time went by, the fastened dialogue between the teacher and the student moved into a close creative community. After four classes of the secondary school, Sasha continued his studies at the Moscow Secondary Art School at the Surikov Institute. The atmosphere of creative competition inherent in the art school, successfully supported by teachers. Frequent visits to the Tretyakov Gallery and the Pushkin Museum of Fine Arts contributed to the development of talent for the future artist and the strengthening of his professional training. 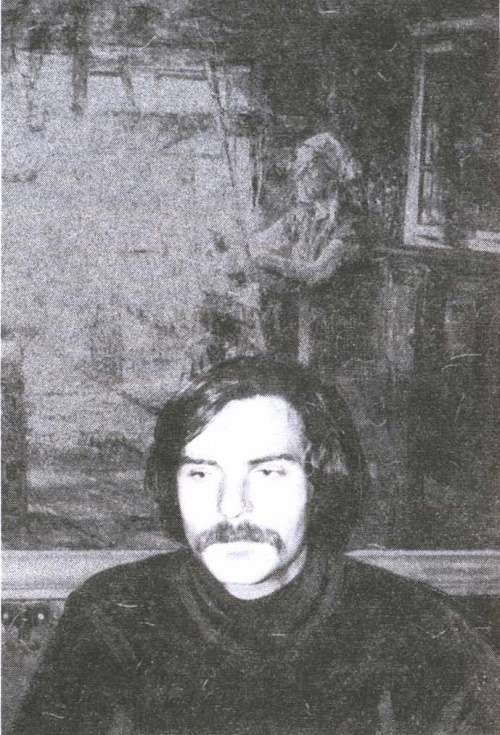 There are a lot of drawings and picturesque works of the young Alexander Gritsai – educational drawings, still lifes, landscapes, portraits and compositions. The modesty of his figurative language, professional maturity and vigilance are striking, whether it is coal or pencil drawing, an ancient sculpture or model, urban landscapes of Pereslavl-Zalessky with its intimate provincial architecture. And what a poetic feeling is from his works, made in Pryluky on the Oka, even in the years of studying at school.

From childhood, the creative character of Alexander Gritsai, the views on art and life were gradually formed. Formation of the artist’s personality was due to the general spiritual atmosphere of the house, family, teachers, and circle of friends. Love and the desire for knowledge of classical literature, music and plastic arts broadened the creative and life horizons of the artist. Everything illuminated the search for a moral ideal, and the choice of ways in art. He constantly enriched himself with new observations and discoveries, studying in every possible case.
Gritsai graduated from the Surikov Institute, the workshop of prominent Soviet artists AM Gritsai, DD Zhilinsky, and SN Shilnikov. An established artist with high professional skills, Alexander Gritsai firmly determined his creative path. Further her improved his knowledge in the creative workshops of the Academy of Arts under the direction of AP Tkachev.

Meanwhile, Alexander whole-heartedly loved his native Russian nature, especially the northern edge. Gritsai painted and painted in the villages and towns of the Arkhangelsk and Vologda Regions. His principle in art was truth, sincerity, a keen interest in the topic. Do not compose a plot speculatively, but build an artistic image based on specific observations.

Intelligent, widely erudite, adherent to the Russian classical tradition in art, he loved ancient spiritual music and idolized the personality and creativity of FM Dostoyevsky. At the same time, life, its wealth and immediacy, breadth and versatility were for the artist the main sources and stimuli of creativity. He always found interesting people everywhere, talked with them for a long time, admired the natural intelligence and beauty of the peasants’ spiritual world.

An idealist in a good sense of the word, he was a man who sensed a lack of goodness, sincerity, fusion with nature in the city’s everyday life. Alexander naturally, without any visible effort, fit into the peasant environment. And village people trusted him, appreciated and respected in him the openness of the soul, a high non-indicative morality, attention to the cares of his neighbor. According to those who knew him well, he helped people, and saved from trouble. Besides, he often brought gifts, willingly complied with the requests of the peasants.

Noteworthy, not only the villagers loved Sasha: in Moscow he was treated with warmth and respect. After all, he was always interested in the work of his colleagues, rejoiced at their successes, and together with friends experienced their sorrows.
Meanwhile, he dreamed of settling in the countryside, of healing like a peasant, of gaining even closer ties with the land. Alexander loved the Russian forest, walked in it as in his own home, did not fear to get lost, everywhere he knew well. By the way, he never shot a bird or a beast. Just wandered for hours and tirelessly, noticed something unusual, patiently searched for mushrooms, berries. Gritsai wanted to create a picture of the life of a lonely man in an empty abandoned village.

Unfortunately, time is ruthless towards man, artist, and creator. But time gives the true value to his art. Creativity of Alexander Gritsay created for life, for emotional excitement and sober meditations. It calls for kindness, mercy, understanding of truth, consecrated by love, to the highest and clear harmony that the artist’s soul longed for. 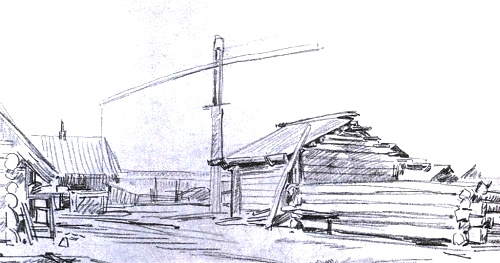 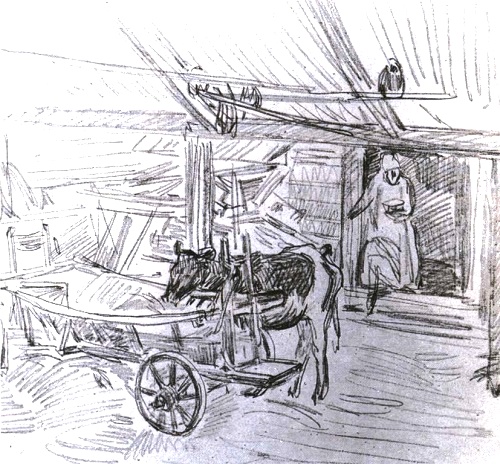 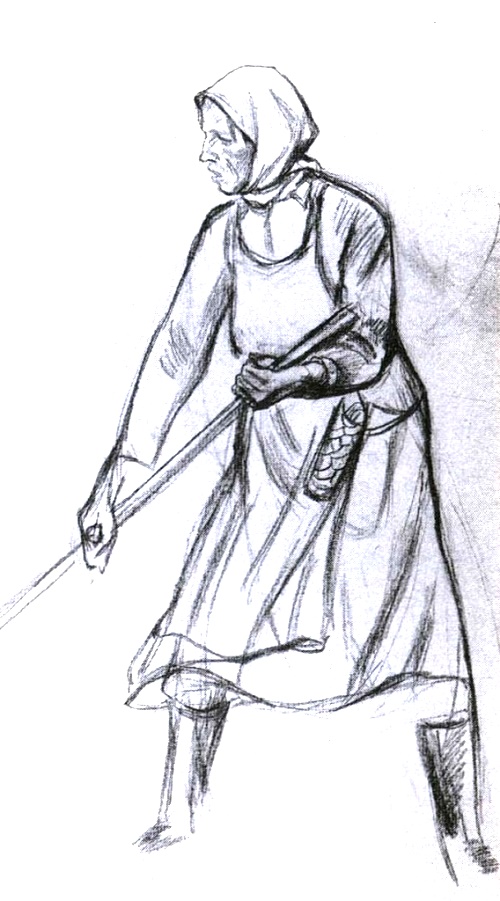 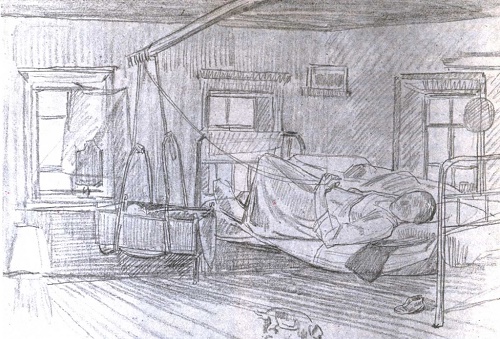 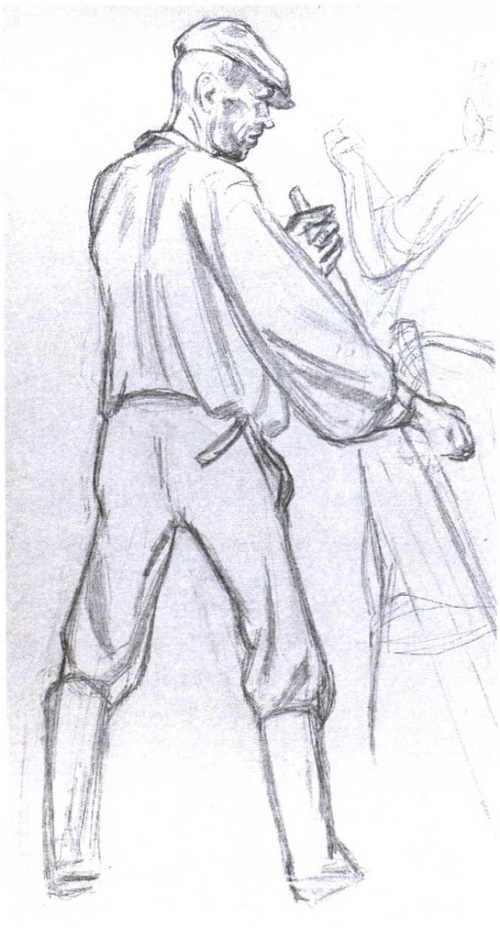 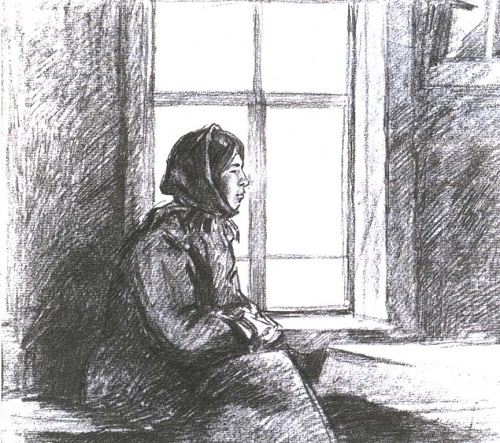 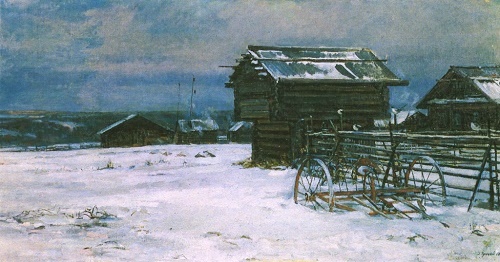 Pokrov (Cover, religious festival in the beginning of winter, when the ground is covered with snow). Oil. 1981 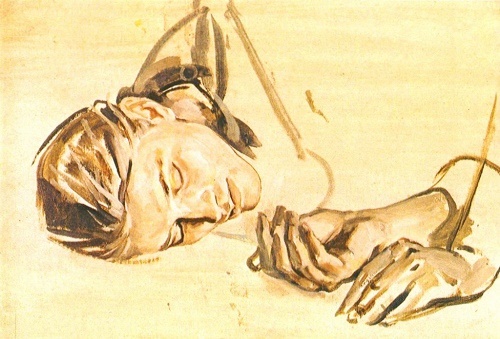 Sketch for the painting ‘Summer’. Tempera. 1981 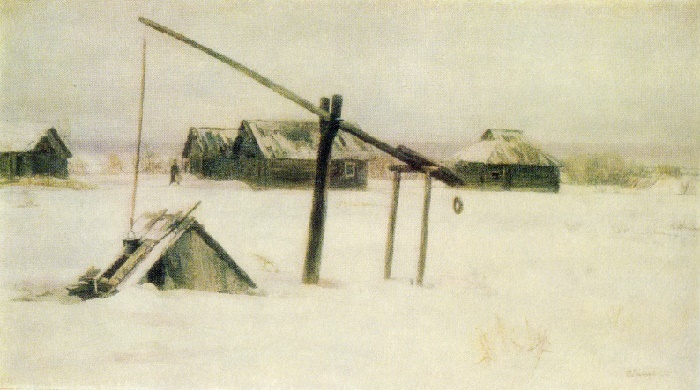 Bathhouses in the village of Puiga. 1979 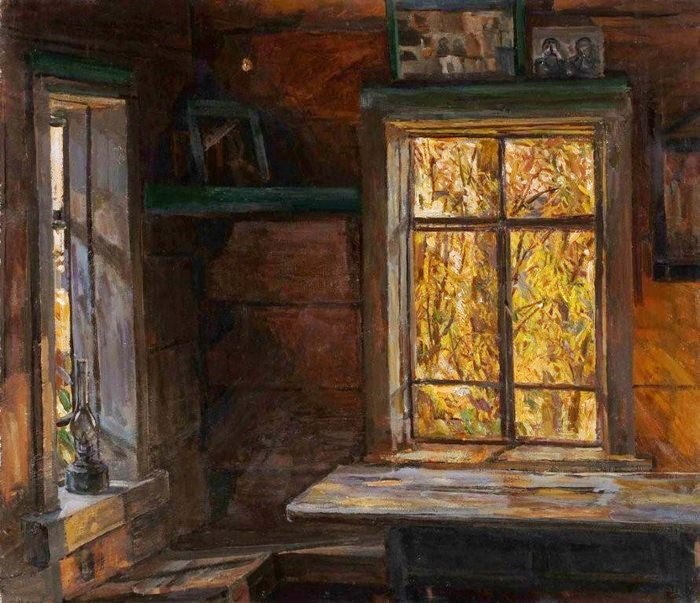 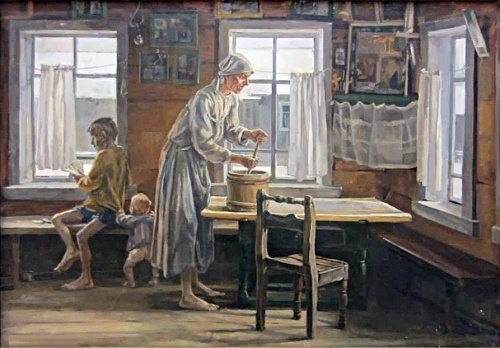 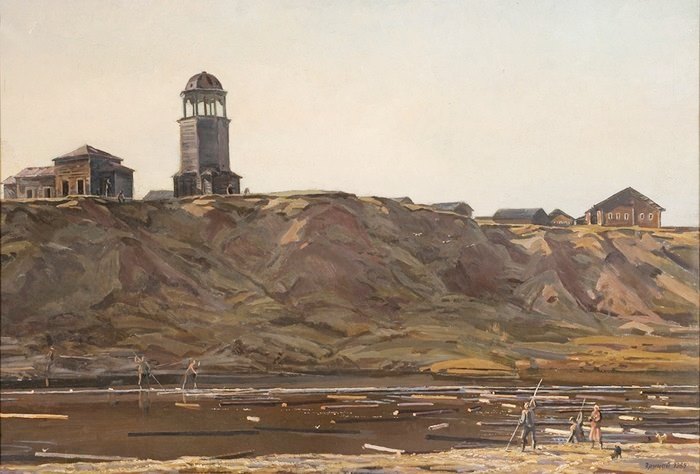 Rafting on the river Puya 1985 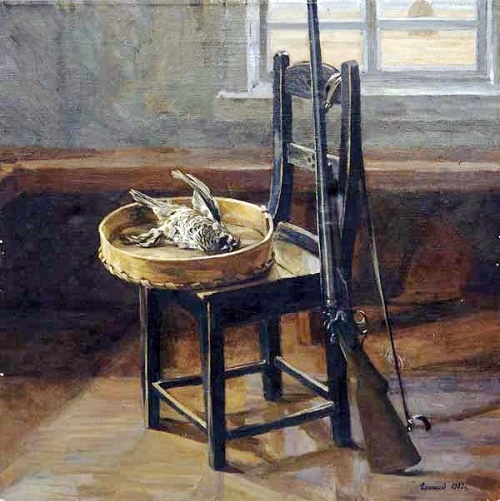 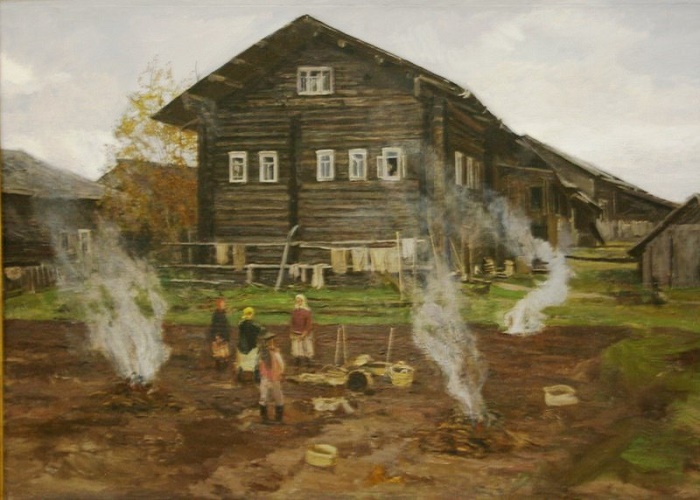 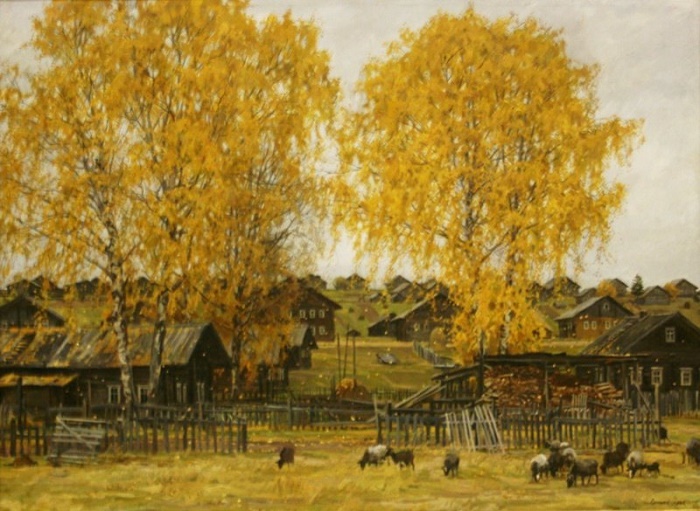 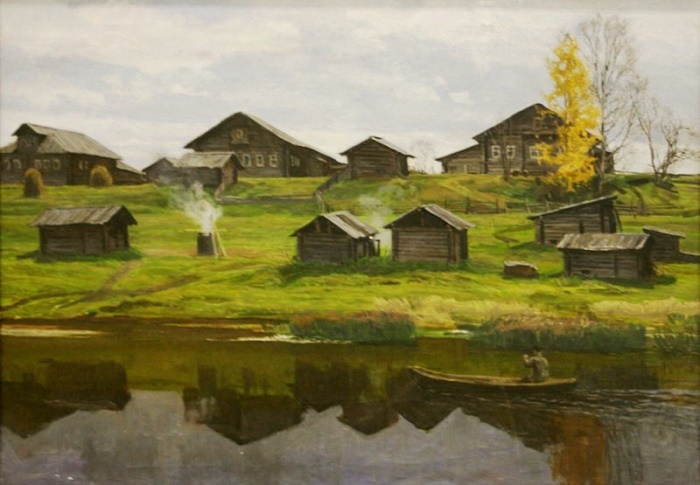 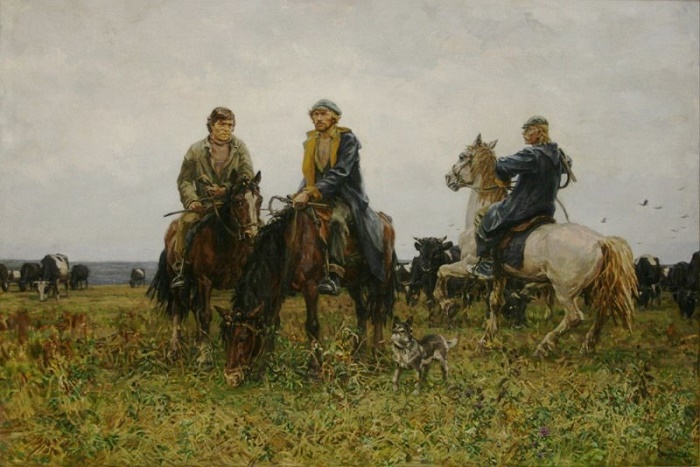 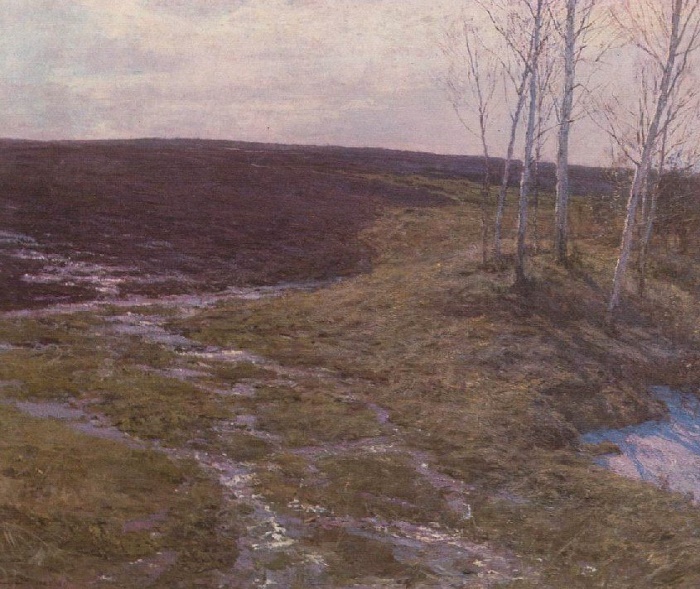 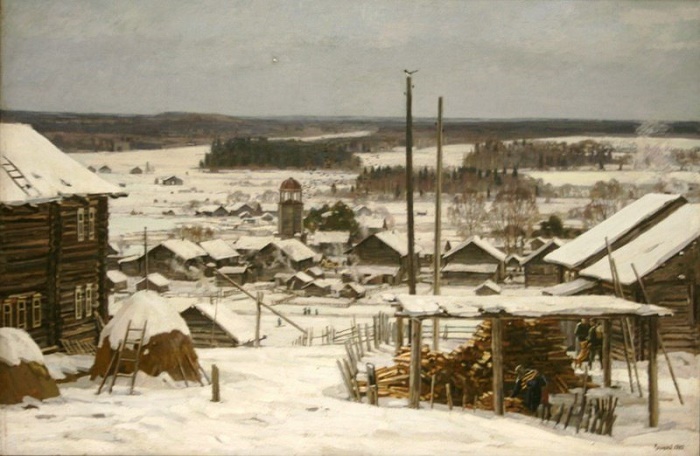