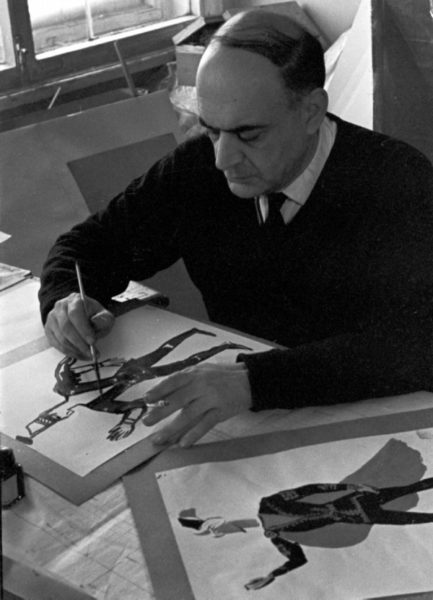 Biographical data on the life of Simon Virsaladze

Simon Virsaladze the artist who dresses the dance Simon Bagratovich Virsaladze was born in Tiflis on December 31, 1908. Already in childhood, he combined choreography lessons and drawing. Determining his future path in life, Virsaladze gave preference to painting. 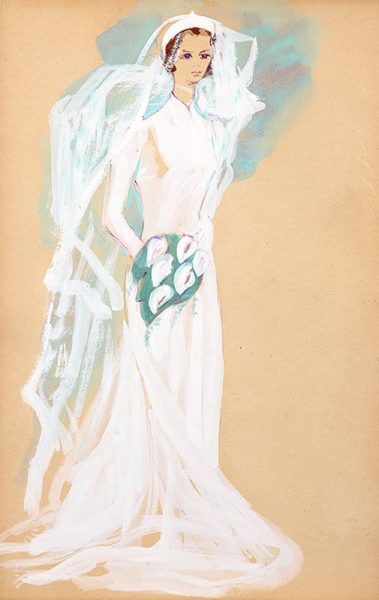 The lady in white. Sketch of a theatrical costume for the production at the Bolshoi Theater

Virsaladze received his artistic education at the Academy of Arts in Leningrad, which he graduated in 1932. It so happened that the time of study at the Academy is the only period in the artist’s life that was not associated with dance culture.

Finding a job in Leningrad for a young and novice artist was not a big deal by this time, many were talking about him, and spoke of him as an original stage artist. 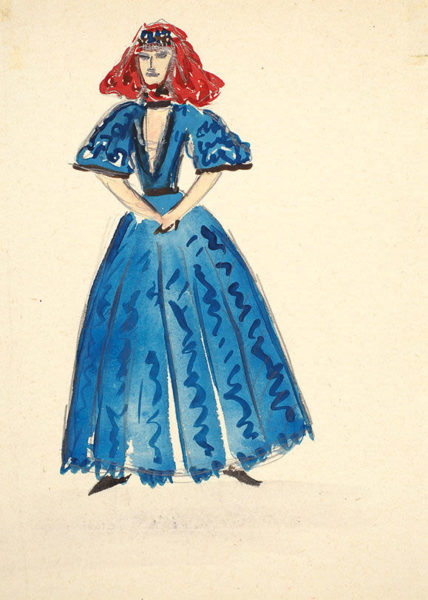 Dancer in a blue dress. Costume design for the ballet by B.V. Asafieva Ashik-Kerib. 1941

Simon Virsaladze an artist who dresses dance The 1950s is the period in the work of Simon Visaladze when universal recognition comes to him.

The reason and the main impetus for this was the staging of the ballet “Stone Flower” by S. Prokofiev, where the artist’s gift as an original decorator manifested itself in full force.

The success was not a one-off the further work of the master of ballet design only strengthened his position among his contemporaries and other decorators.

“The Nutcracker” and “The Sleeping Beauty” by P. Tchaikovsky, “Romeo and Juliet” by S. Prokofiev, “Ivan the Terrible” by M. Chulaki and this is not the whole list of ballets, the decoration of which belongs to Simion Virsaladze. 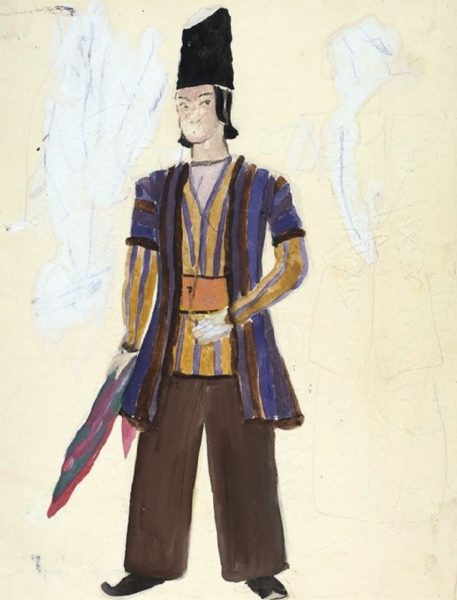 A young man in a fur hat. Costume design for the ballet by B. Asafiev

Simon Virsaladze the artist who dresses the danceSimon Virsaladze, the decorator, is associated with the reform that was carried out in the theater in the twentieth century.

The main goal of this reform was to create a new look for the artist, who worked in the theatrical field.

Simon Virsaladze said that a conductor, an artist-decorator and a director are one whole, which should live by the same idea. Therefore, I did not emphasize that the scenery for the performance should fully correspond to the atmosphere, the musical action and the plot that are laid down in the outline of the entire production. 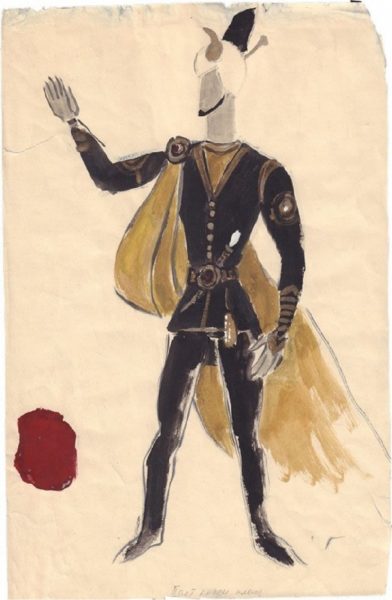 Costume design for the vizier for the ballet Legend of Love

The creative method of Simon Virsaladze was named “pictorial symphony”. This quality of Virsaladze’s stage thinking makes him a theater painter of a new type.

Simon Virsaladze the artist who dresses the dance Before embarking on the creation of scenery and costumes, Simion Visaladze listened to music several times, talked with the stage director and choreographers. And only when, thanks to these conversations and the information received from them, he formed an image, the artist began his work. 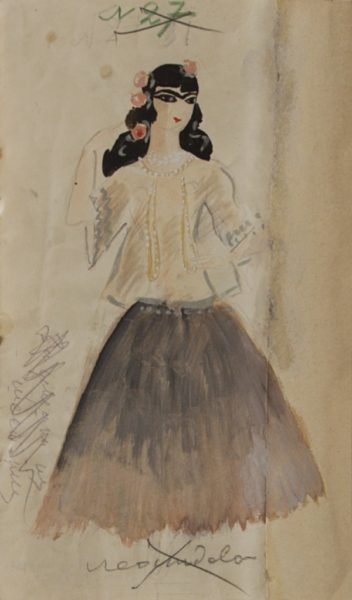 Artistic handwriting and the principle of Virsaladze’s work

Simon Virsaladze the artist who dresses the dance It is difficult to say to which direction the work of Simon Virsaladze belongs. According to his early works, one can safely speak of him as a symbolist artist. In the future, in his works one can find the influence of romantic artists. Not alien to this artist and modernism, namely art avant-garde. 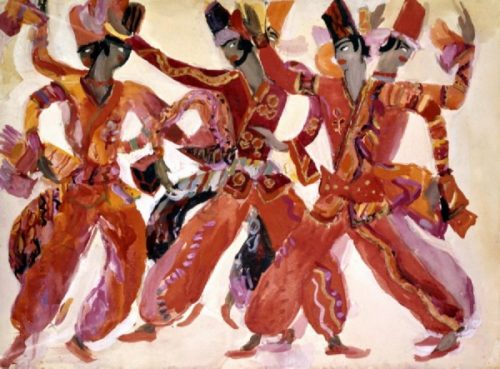 Costume sketches for the ballet ‘Scheherazade’

Simon Virsaladze the artist who dresses the danceSimon Virsaladze does not specify his scenery he does not see the need for it. For example, most of the action in the ballet The Sleeping Beauty by Pyotr Ilyich Tchaikovsky takes place in the garden.

The artist comes to the conclusion that it is not necessary, and it would even be foolish to depict a garden with decorations after all, his image will be presented in dance numbers. Simon set himself another task to create with the help of these decorations the environment itself, the colors and the mood. In order to achieve the intended goal, the artist-decorator uses only color spots, costumes or costume groups. 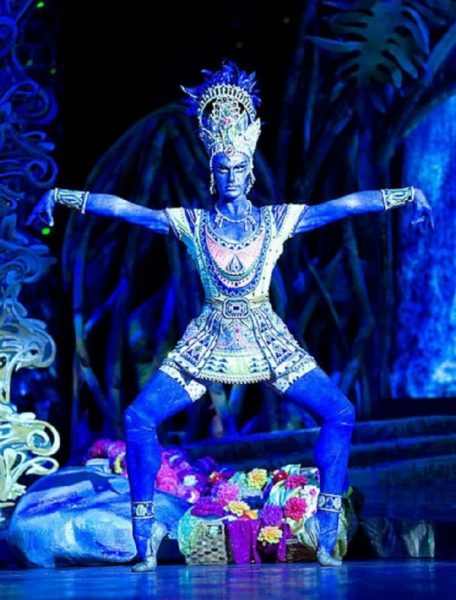 And also new productions have been created: 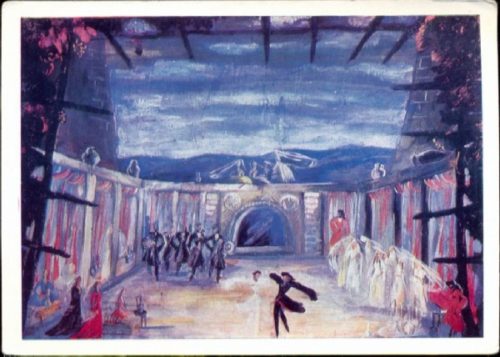 Set design for A.M. Balanchivadze’s ballet Heart of the Mountains 1967

In addition to Grigorovich’s performances, he designed only two productions at the Bolshoi Theater: in 1956 “Swan Lake” and in 73 the ballet “Mozart and Salieri” to the music of W. A. ​​Mozart and A. Salieri. 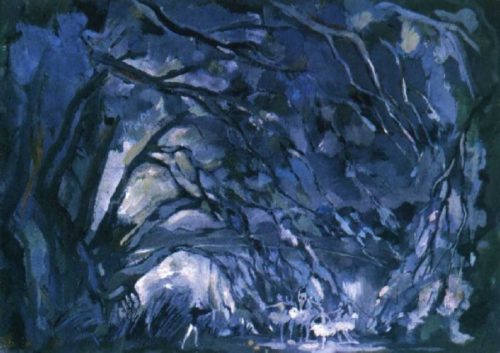