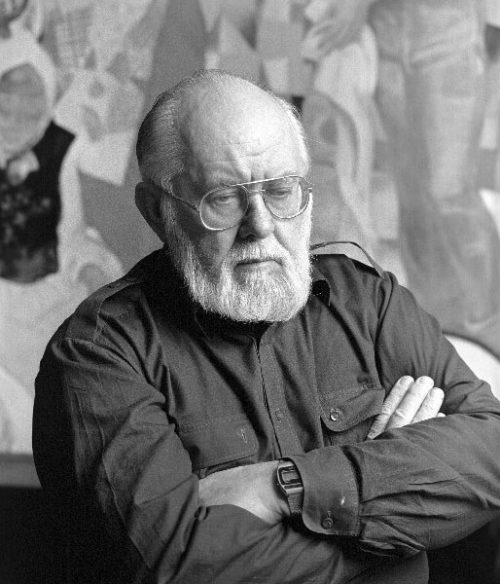 Mylnikov Andrei Andreevich (1919-2012) the largest Soviet painter, People’s Artist of the USSR, professor, vice-president of the Russian Academy of Arts.
A. A. Mylnikov was born in Pokrovsk in 1919. In 1946 he graduated from the Repin Institute of Painting, Sculpture and Architecture. He was a student of I. Grabar and inherited the best traditions of Russian art in all the variety of images and pictorial techniques. In 1948, here he entered the graduate school of the Academy of Arts and continued his studies in a creative workshop. 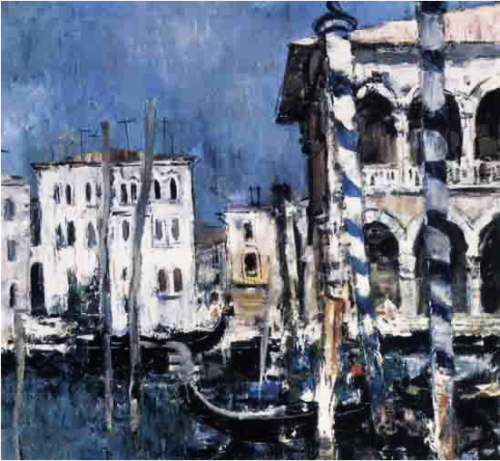 A. A. Mylnikov’s work is multifaceted, his works amaze with the monumentality and epic nature of the concept. Throughout his life and art, Mylnikov carried the unshakable ideals of beauty and harmony of the human spirit. The main theme of A. Mylnikov’s work was a man with his holidays and weekdays, tragic experiences and joyful discoveries. The life-affirming beginning of his work sets the audience up for victory over their everyday difficulties and problems. This is the great mission of A. A. Mylnikov’s art.

His first significant work “The Oath of the Baltic”, written almost immediately after the war in 1946, became the artist’s diploma work, and at the same time laid the foundation for a monumental direction in his work. In that work, which sounded like a requiem for the memory of fearless warriors to sailors, the artist concentrated his worries about the fate of the fallen war heroes. 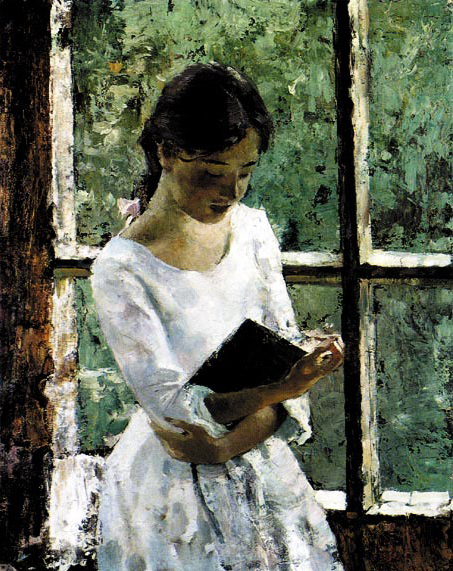 1950-1960s A. A. Mylnikov painted portraits of his contemporaries. The central image of Mylnikov’s work was the portrait of his daughter Vera. Andrei Andreevich watches the girl with delight, brilliantly conveying the spontaneous character of the child. He is interested in how she grows up, and he paints her youthful portraits. The mood of the artist is also conveyed to the viewer, who, behind this undeniable charm of the model, notices the skill and lightness of the artist’s brush.

Portraits of the artist’s wife are distinguished by harmony and lyricism: At Breakfast (1958), Arisha (1951). In his pictorial manner, the author is close to the painting of K. Korovin and V. Serov, to the traditions of Russian impressionism. The portrait of his wife against the background of the window and the painting “White Night” (1961) with her image can be called masterpieces of Soviet art. 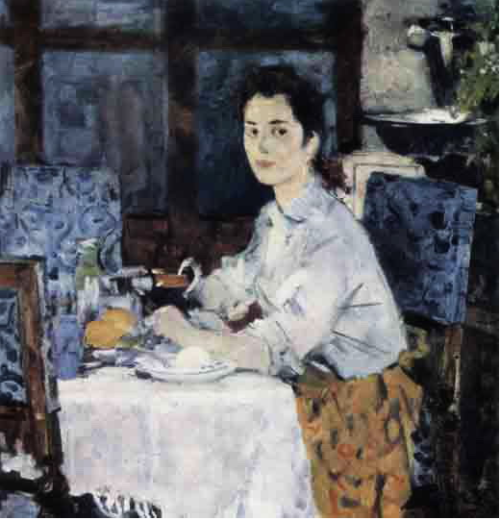 The portrait of the sculptor S. T. Konenkov became a memorable event in the life of two famous masters. A. Mylnikov splendidly emphasized here not only the external resemblance, but also the impetuous nature of what is depicted. In the harmony of color and in the perfection of the composition, a surprisingly expressive work is born, full of dynamics and triumph of the spirit. A. Mylnikov created a wonderful image of a sculptor, philosopher, person, an image that has passed through decades without losing its relevance. 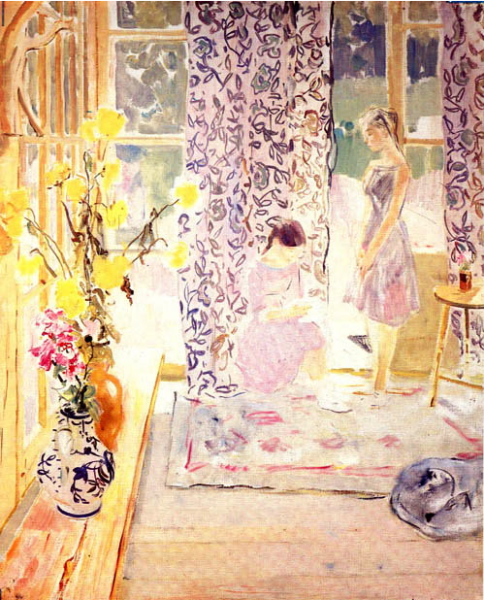 A. A. Mylnikov was a born landscape painter.

The milestones in the art of A. A. Mylinikov were the paintings “Morning and Sleep”, known in several versions.

The main idea uniting the paintings the harmony and unity of man and nature runs through all the artist’s work. Fifteen years of work by A. A. Mylnikov were devoted to work on the “Spanish Triptych”, for which the artist received the gold medal of the Academy of Arts of the USSR (1981) and the Lenin Prize (1984). The work is divided into three parts: “Bullfighting”, “Crucifixion”, “Garcia Lorca”. The artist chose the tragic subjects of Spanish history, emphasizing this with the intense contrast of red and gray, blue and white tones, as well as the emotional expressiveness of the characters’ characteristics. 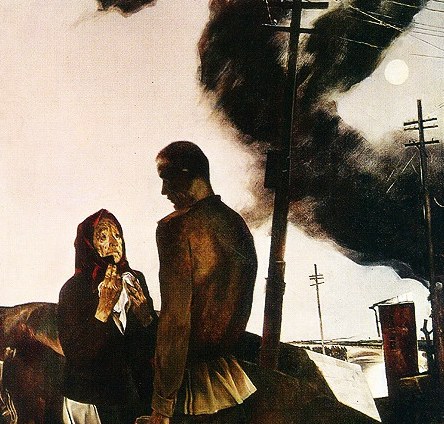 In 1975, for the thirtieth anniversary of the Great Victory, A. A. Mylnikov painted the painting Farewell.

The work is monumental, not only in terms of the size of the canvas (250 x 250), but also in character. This picture expresses the tragedy of the fate of millions of Soviet people who survived the war. Before us is an eloquent scene: Mother, perhaps, says goodbye to her son forever before the battle. We hardly see the face of the young man, all attention is focused on the appearance of an elderly woman. Pursed lips, trembling hands and despair in the eyes in this dialogue, the pain and sorrow of all mothers who have lost their loved ones. The artist intensifies the emotional acuteness of what is happening by means of color, laconic composition, intensifies contrasts with a rigid rhythm of lines. 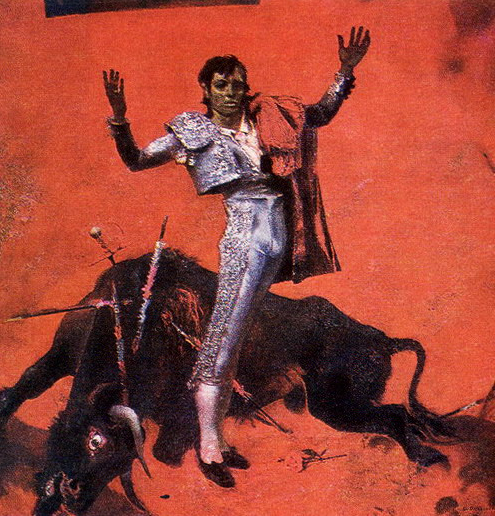 The life and work of Andrei Andreevich was associated with art, and art with love for his relatives and friends, for his generation and his native land. The creative heritage of A. A. Mylnikov is huge, his works are presented in many museums in Russia and in private collections. He lived a long creative life filled with interesting events, brought up a whole galaxy of talented painters. 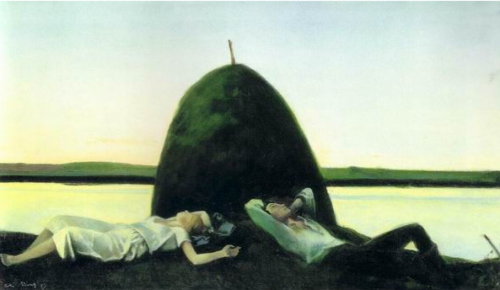 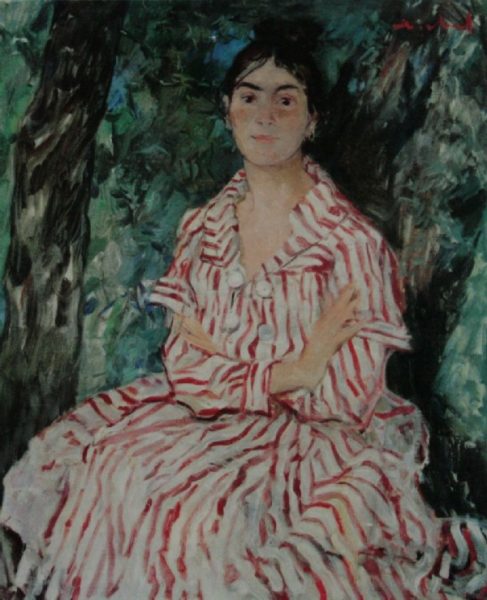 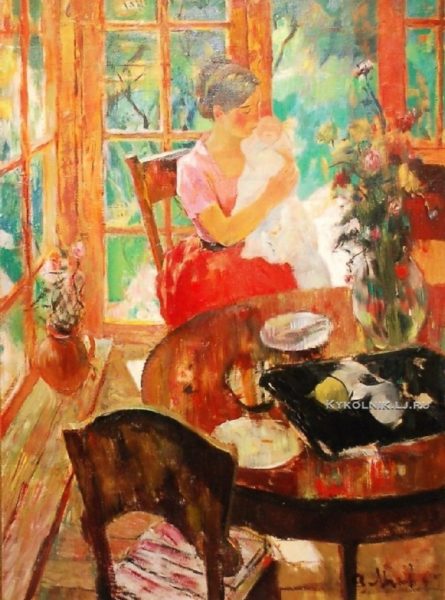 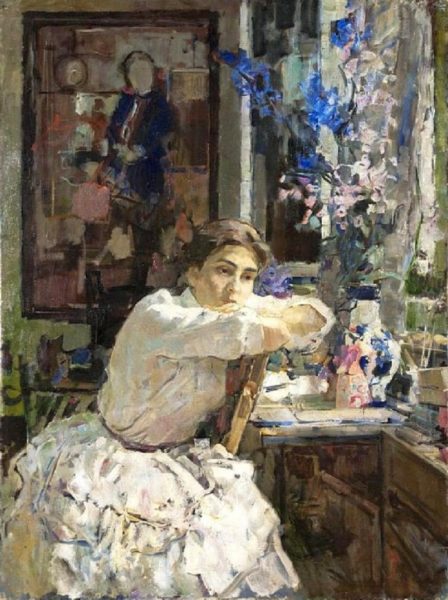 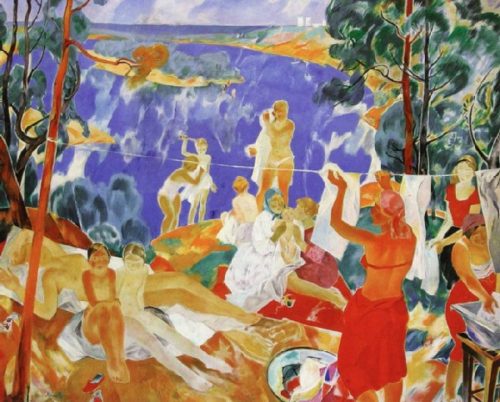