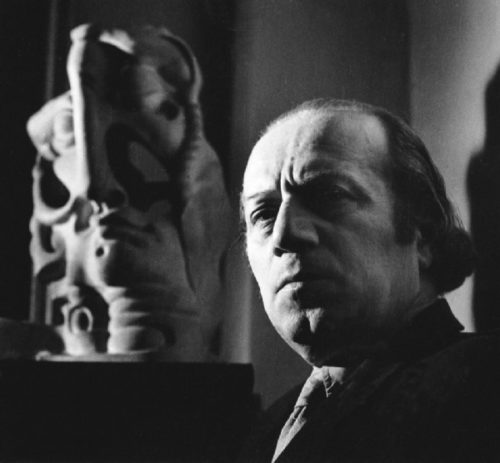 Ervand Semyonovich Kochar is a great Armenian experimenter. He was a student of Yeghishe Tadevosyan and Pyotr Konchalovsky. And then he left for Paris to join the circle of those who, at the beginning of the 20th century, formed a new language of art. Picasso, Matisse, Braque, Leger and Chirico – with these renowned masters, Kochar regularly exhibited in Parisian salons and even became one of the ideologues of the “Manifesto of Dimansionism” – a kind of artistic program of the European avant-garde. 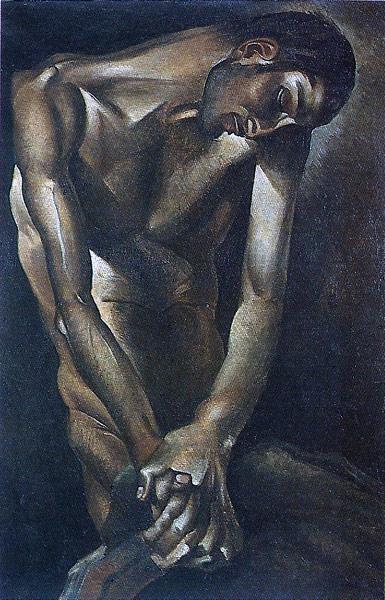 Ervand Kochar was born in Tbilisi in 1899. His father is a high-ranking official. Semyon Kochar moved his family from Shushi even before the birth of Yervand. From 1906 to 1918, the future artist studied at the most prestigious educational institution in Tbilisi – the Nersesyan Theological Seminary. While receiving a spiritual education, Kochar simultaneously attended painting and sculpture courses at the art school of O. Schmerling. It was at this time that Yeghishe Tadevosyan, an Armenian renowned artist, a student of Vasily Polenov, took a class. After graduating from the seminary, Yervand Semyonovich left for Moscow, where he continued his studies at the Moscow State Free Art Studios, in the class of Pyotr Konchalovsky, a Russian artist, one of the founders of the art association “Jack of Diamonds”. 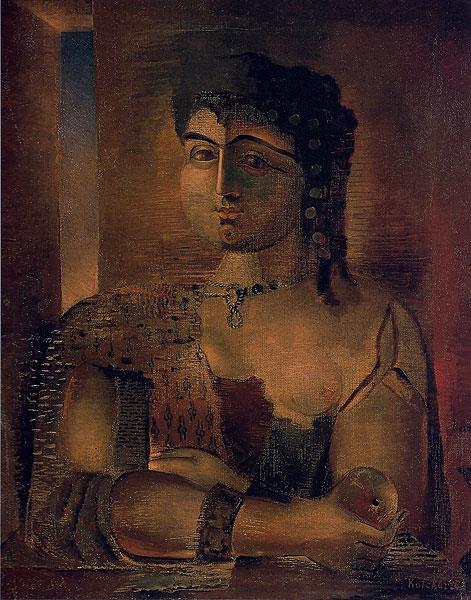 After completing the courses, Ervand Semyonovich returned to Tiflis, where he lived for two years. Then the artist left for Constantinople, but stayed in Turkey for a little less than a year, preferring to move to Venice. For the next year and a half, from 1922 to 1923, Kochar taught drawing at the Mkhitarists, at the school at the Armenian monastery of St. Lazarus. Such an intermittent rhythm of existence is characteristic of those who are looking for themselves and their path in life.

In Venice, he first turned to sculpture – he was greatly impressed by the work of the masters of the Italian Renaissance. Here he met the poet Avetik Isahakyan, with whom he later became close friends all his life. 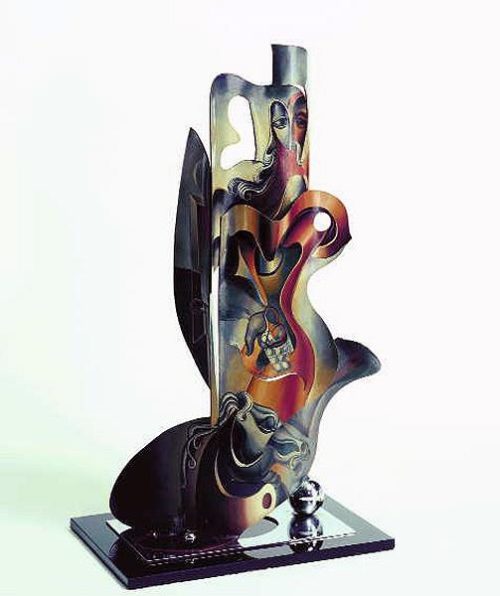 The atmosphere of Paris bewitched Kochar. Ervand Kochar began going to the Louvre as if to work, studying the art of the Hellenes, Sumerians and ancient Egyptians. He met Picasso and became fascinated by the art of Cubism.

He lived in Paris for 13 years. During his stay in the French capital, he managed to live the life of the hero of the opera La Bohème: he rented a small studio room, married an eccentric poetess named Vardeni, who bore him a daughter. Both of them – his wife and daughter – died rather quickly from tuberculosis. Kochar is widowed.

In Paris, the artist took part in many salons. And even he himself organized five personal exhibitions, each time receiving high reviews among art connoisseurs of those years. At the same time, he remained as poor as a church mouse. 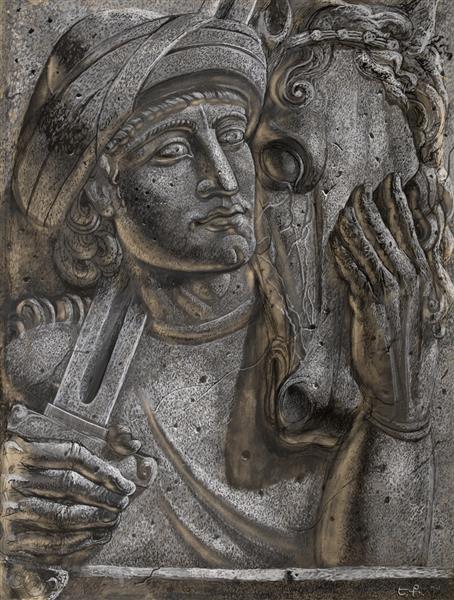 Soviet period. The maturity of the painter

In 1936, Yervand Kochar made the third major decision in his life – he left for the USSR, leaving his second wife Meline Ohanyan in Paris. He leaves for the terry Stalinist times, never to return to Europe. He settles in Yerevan. Of course, he is not allowed to work in peace. Very much an “Armenian European” does not fit into the Soviet framework. He was quickly accused of formalism, which in Soviet times equated the artist with the status of “enemy of the people.” Kochar begins to persecute. His name is not included in reference books, removed from research papers. 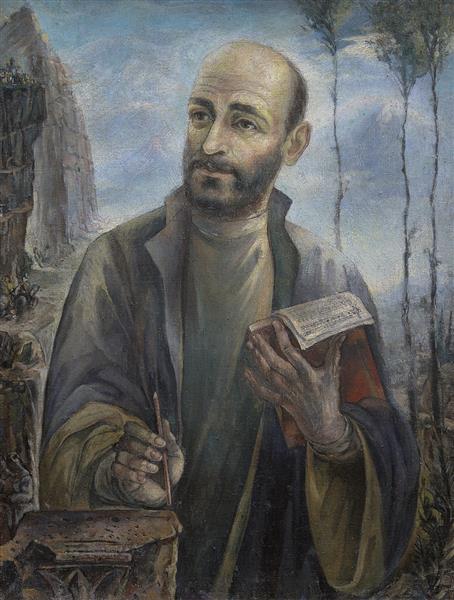 The “hospitable” Soviet Union greeted the painter with open arms. In his homeland, Kochar faced not only persecution, but also arrest and imprisonment. However, all these tragic circumstances did not prevent the artist from working. The uniqueness of the master is that in the Soviet period he turned to painting, graphics, and sculpture with equal success. The creation of the famous monument “David of Sasun” is his work of genius. 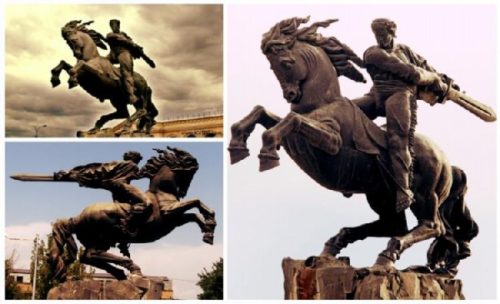 Ervand Kochar went to the creation of this sculpture through illustrations – he was very happy when in 1939 he was offered the design of the epic “David of Sasun”.

Kochar depicted scenes of the epic in the form of stone bas-reliefs. Six sheets of the epic, made in white and ocher gouache, were painted by the master in the form of stone Assyrian-Babylonian bas-reliefs. “Fight of Mher with a lion”, “David is a shepherd”, “David with Kurkik-Jalali”, “Fight of David with Mera Melik”, “Mher the Younger” – all these images seem to be carved out of tuff. 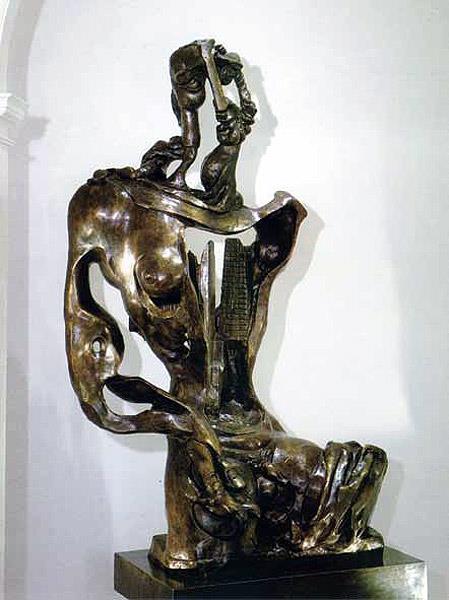 And then he created the statue of David of Sasun, installed on the Railway Station Square in Yerevan. The equestrian monument is made of forged copper, and the pedestal is made of basalt boulders. The height is 12 meters. Located in the center of a twenty-five meter pool.

Yervand Kochar spent two years in prison and was released due to lack of corpus delicti. And in 1957, the Yerevan City Council again instructed him to create the statue. In 1959, the monument was installed. Today this monument is a “visiting card” of Armenia. The monument was called by the artist Lado Gudiashvili “the best work of modern sculpture” and it is difficult to disagree with this statement. 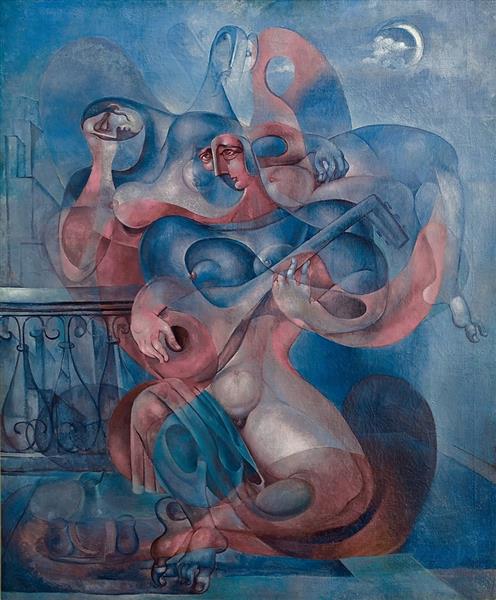