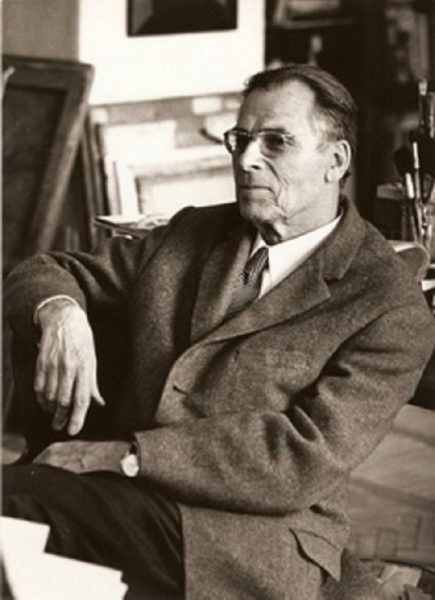 Kupriyanov m V. Outstanding Soviet painter, graphic artist and cartoonist, author of world-famous political posters. Member of the creative team Kukryniksy. People’s Artist of the USSR (1958). Hero of Socialist Labor (1973). Member of the USSR Academy of Arts (1947). Laureate of the Lenin (1965), five Stalin (1942, 1947, 1949, 1950, 1951) and the USSR State Prize (1975), the State Prize of the RSFSR im. I. E. Repin. He worked in the field of satire, on works on a political theme, historical-revolutionary and the theme of the Great Patriotic War. 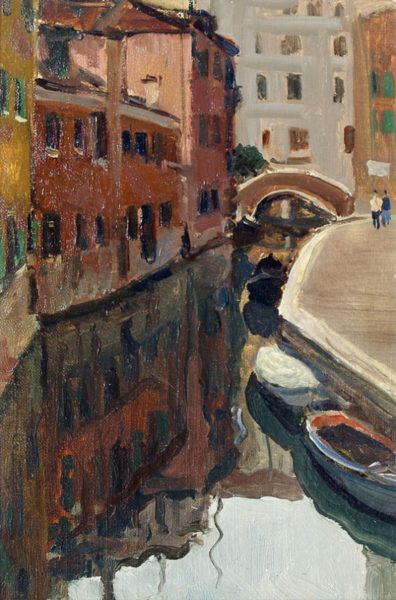 Mikhail Kupriyanov was born in the small Volga town of Tetyushi. In 1919 he took part in an exhibition of amateur artists. Received first prize for watercolor landscape. In 1920-1921 he studied at the Tashkent Central Art Training Workshops.

From 1921 to 1929 he studied at the graphic faculty of the Higher Artistic and Technical Workshops (VKHUTEMAS, VKHUTEIN) in Moscow under N. N. Kupreyanov and P. V. Miturich.

Since 1925, he was a member of the creative group of three artists formed at the same time: M. V. Kupriyanov, P. N. Krylov, N. A. Sokolova, which received nationwide fame under the pseudonym “Kukryniksy”. Throughout the artist’s life, creative activity continued as part of this team. In 1929 he worked on costumes and scenery for the enchanting comedy “The Bedbug” by V. V. Mayakovsky at the Meyerhold Theater. Created a large number of illustrations for the works of M. Gorky, D. Bedny, M. E. Saltykov-Shchedrin, N. V. Gogol, N. S. Leskov, M. Cervantes, M. A. Sholokhov, I. A. Ilf and E. P. Petrova; cartoons for the newspapers Pravda, Komsomolskaya Pravda, Literaturnaya Gazeta; magazines “Crocodile”, “Projector”, “Change”, “Smehach”; cartoons on artists, published in separate books. 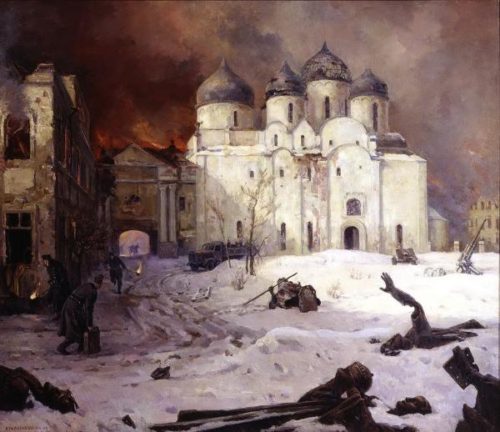 The flight of the Nazis from Novgorod

In the late 1920s and early 1930s, Kupriyanov worked a lot in watercolor technique and made many industrial landscapes associated with the railway. These sheets attract with artistry, freedom of performance, convincingly conveyed by movement. The artist enlivens his works with steam locomotives, wagons, cisterns, depot buildings with figures of railway workers, various technical buildings and devices switches, station booths, semaphore supports. The vitality of these watercolors is in the subtle harmony of nature and technology, perfectly conveyed to the atmosphere of morning fog and air, which Kupriyanov masterfully creates with rather limited means. Their composition is dynamic, the color is ascetic and collected all graphic elements work to highlight the main thing. 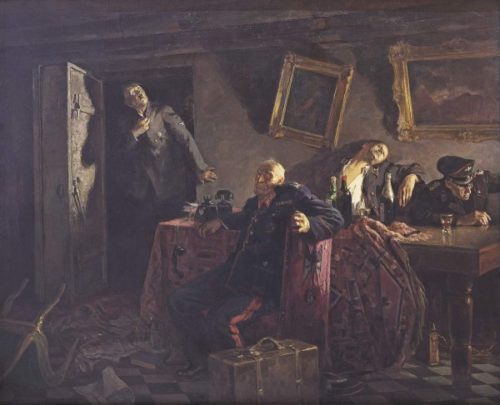 During the Great Patriotic War, with his colleagues in the creative union (Krylov Porfiry Nikitich and Sokolov Nikolai Aleksandrovich), he created a large number of anti-war caricatures, posters (“In Moscow, rolls like fire are hot!” 1941, “We will mercilessly crush and destroy the enemy!” 1941. We beat, we beat and we will beat!” 1941. We are fighting great, we are stabbing desperately the grandchildren of Suvorov, the children of Chapaev” 1942) and leaflets published in the newspaper Pravda and Okna TASS (Brekhomet No. 625, Transformation Fritz “№640,”

At the reception of the possessed commander-in-chief “№899,” The hour is approaching “№985,” Krylovskaya monkey about Goebbels “№1109,” History with geography “№1218 and many others). In 1942-1948 the creation of the paintings “Tanya” and “Flight of the Nazis from Novgorod.” As part of the Kukryniksy, he was present as an artist-journalist at the Nuremberg Trials, and made a series of sketches from nature. 1925-1991 the individual creative activity of the artist. 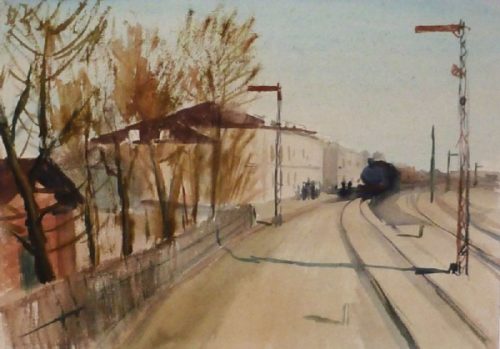 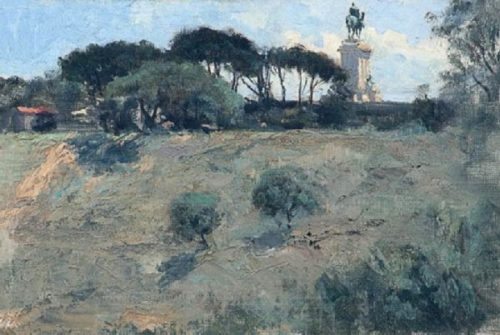 Kupriyanov Mikhail Vasilievich appreciated the work of French artists, in particular the Barbizonians: C. Corot, J. Millet, C. Daubigny, J. Dupre, T. Rousseau. The post-war, full of air, brownish-silver landscapes of Mikhail Kupriyanov coloristically resemble the works of these artists. Despite the quite traditional and even conservative painting style, he developed his own subtle recognizable style. Simplicity, laconism and persuasiveness of pictorial techniques are characteristic of Kupriyanov as a landscape painter. In terms of the content and depth of feeling that the artist puts into his landscapes, their figurative completeness and compositional integrity, many of his sketches rather resemble small paintings. 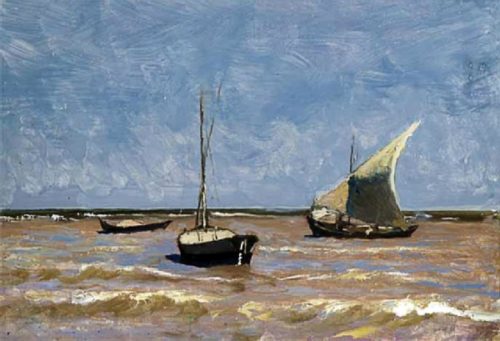 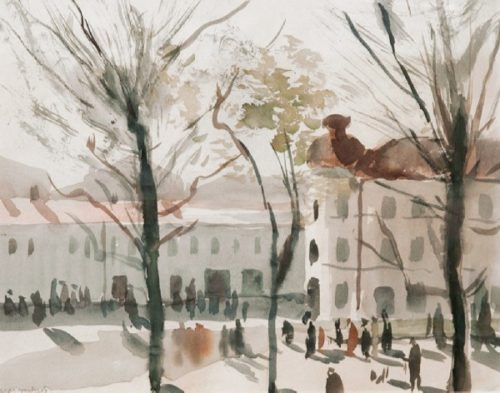 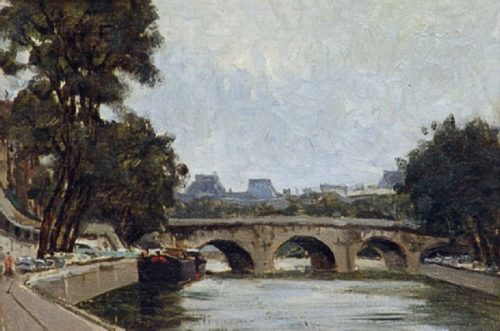 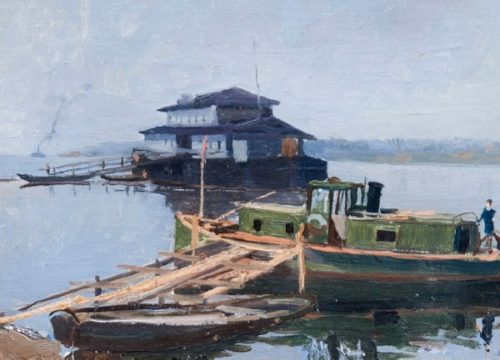