In Soviet times, the profession of a “model” was as mysterious and unattainable, like a profession of astronaut or attache in France. Soviet people remember well the fashion magazine “Silhouette”, and some issues of the fashion magazines featuring Soviet fashion model Regina Zbarskaya. The models were inhabitants of heaven, even greater than film actresses, these at least were shown on television and interviewed for newspapers. Where the models like Regina live and how they work – remained a mystery. All these secrets revealed in the post-Soviet era. And then we have learned about sad fate of Regina Zbarskaya, betrayed by everybody – from friends and relatives to fans …
END_OF_DOCUMENT_TOKEN_TO_BE_REPLACED 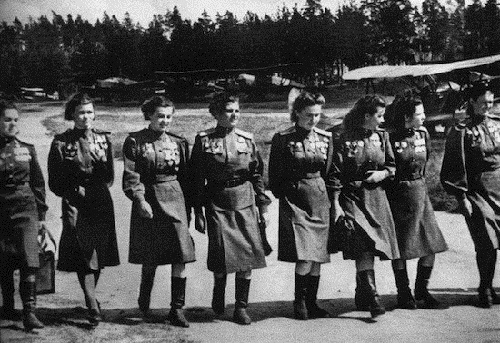 USSR Female Aviation Regiment “Night Witches” – a bomber regiment of the USSR troops, consisting exceptionally of women. The Regiment was an unusual phenomenon in the Air Forces of the USSR. During the years of the World War II, or the Great Patriotic War, its pilots made many sorties, covering the flag of the regiment with military unfading glory. Brave women of the 46th Guards Taman Red Banner Order of Suvorov of third degree Night Bomber Aviation Regiment flew in tiny fighters in the remote areas to fight the Germans at night. They were armed and trained better than the German Air Force. During the fighting pilots of regiment made 23,672 sorties, many of which helped win important battles, both in Russia, and later, and in Germany. Women were so good and subtle, that German soldiers gave them the nickname «Nachthexen», or “Night Witches.” Their tactic was to fly up to the goal at a certain distance, and then turn off the engine to reduce the noise emitted by aircraft. They gradually reduced height and dropped bombs on the enemy, before anyone had time to notice them.
END_OF_DOCUMENT_TOKEN_TO_BE_REPLACED

Soviet artist Viktor Koretsky (1909-1998) is known primarily as a master of the political poster. He was the member of the Union of Artists, Honored Artist of the RSFSR (1964). During his life he made about seven hundred drawings on various topics, especially – political. Viktor Koretsky began his education in Moscow – professional art school (1922-1929). In the late 20’s – early 30-ies he created a gallery of portraits of artists and actors. Since 1931 and almost to the demise of the Soviet Union, he was constantly working on political posters. Under the influence of creativity of John Heartfield and Gustav Klutsis developed its own technique of photo mosaics as a form of poster. Collaborated with publishers “OGIZ”, “IZOGIZ”, “Art”. In 1930 he worked as a decorator for a number of plays of the realistic theater of Nikolai Okhlopkov and theater-studio of Yuri Zavadsky. Almost fifty years he was a member of the editorial board of the publishing house “Reklam-film” (1939-1987).
END_OF_DOCUMENT_TOKEN_TO_BE_REPLACED