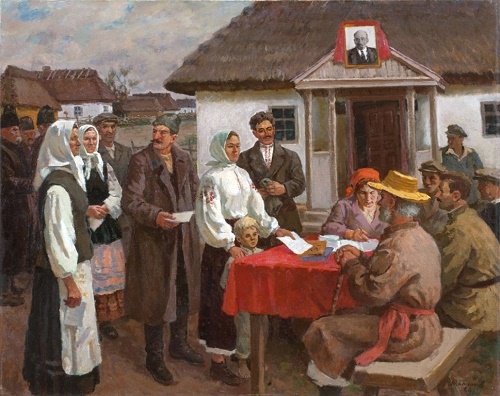 Soviet Ukrainian painter Yuri Balikov
First of all, known Kiev painter Yuri Yevdokimovich Balikov belongs to a generation of artists whose youth fell on the difficult years of the Great Patriotic War. That’s why the biography of wizard is typical for his generation. It reflected the characteristics of the life and career of an entire galaxy of Soviet artists, who in their youth had to defend their homeland.
The master of genre painting, a landscape painter, and portraitist Yuri Balikov was born 17 April 1924, in the village of Pliska of Vinnitsa region. He graduated from the Kiev State Art Institute, workshops of O. Shovkunenko and V. Puzyrkov (1958). His major works include “Trio of bandura players” (1967), “Winners” (1985), “Portrait of People’s Artist of Ukraine D. Narbut”, “Soldier Destiny” (1997), and “The Dream”, dedicated to T. Shevchenko. Member of the Union of Artists of Soviet Ukraine (1965), awarded the Order of the Patriotic War, and medals. Balikov took part in exhibitions of Soviet Art since 1960. His works are in private collections in Ukraine and Russia.
END_OF_DOCUMENT_TOKEN_TO_BE_REPLACED 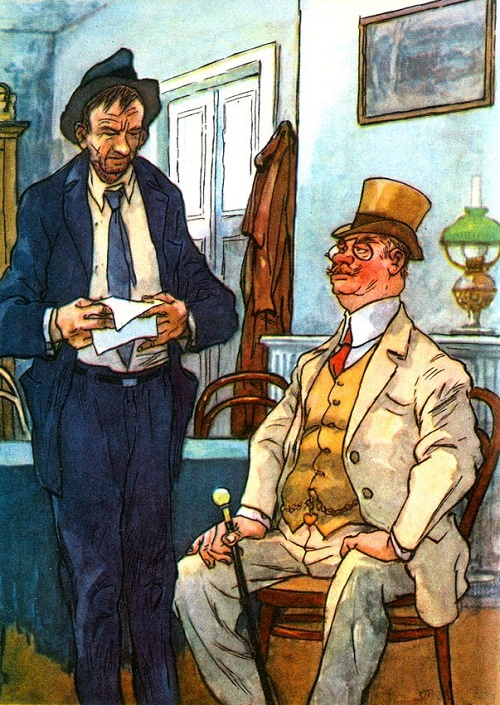 Soviet cartoonist and graphic artist Ivan Semyonov (1906 – 1982) was People’s Artist of the USSR (1974). Also, he was vice-president of the International Association of Literature and Art for Children. Besides, he was a chairman of the section at the Cartoonists of the USSR Union of Artists and a board member of the Union of Artists.
Ivan Maksimovich Semyonov was born into the family of the Don Cossacks in Rostov-on-Don. Even in secondary school, Ivan studied drawing and painting at the workshop of SK Gambartsumov. At the same time, he had to earn as a loader and a seller, as well as newspaper artist. In addition, he worked in amateur theater “Eldorado”.
Meanwhile, in 1925 he even entered the Medical Institute. However, the love for art forced him to leave the institute (after one year of study) and enter the Rostov Art College (1926-1928). And already in 1926, the regional newspaper “Hammer” published his first cartoon “Cooperation classes” (on the miners strike in Britain). Since that time, the newspaper regularly published his works and Semyonov became a full-time employee.
END_OF_DOCUMENT_TOKEN_TO_BE_REPLACED 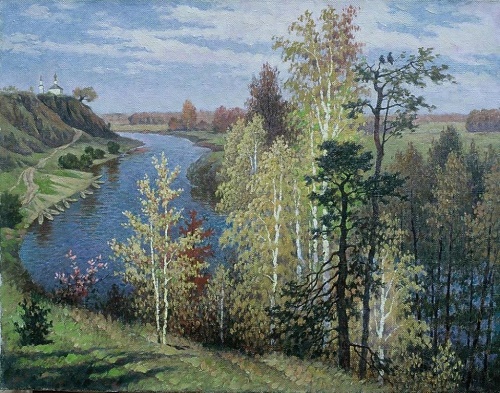 The son of a forester, Vasily Timofeyevich Losev was born March 4, 1934 (Biryuchiy village, Central Black Earth region). Future graphic artist and painter, he attended art studio of Soviet artist L. Bednov at Borisoglebsk Railway Club (1949). In addition, he graduated from the Painting Department of the Penza Art College of K. Savitsky, workshops of M. Bumchin and M. Valukin (1957). Immediately after school worked as an artist of the Voronezh urban design (1958-1961). At the same time, he participated in the urban thematic, regional, zonal, national and all-union exhibitions of Soviet Art. As a result, already in 1967 he became a member of the USSR Union of Artists, and then Chairman of the Board of the Voronezh branch of the Union of Artists (1972-1974). In 1982 Losev received the title of Honored Artist of the RSFSR. Solo exhibitions of paintings by Losev took place in Voronezh Exhibition Hall of Artists Union (1984 and 1999). Incidentally, his son, Andrei Losev (b. 1963) is also an artist.
END_OF_DOCUMENT_TOKEN_TO_BE_REPLACED 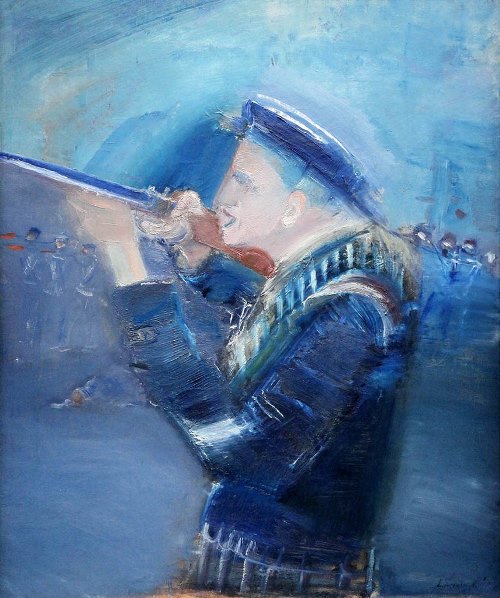 Soviet avant-garde artist Alexander Labas entered the history of Soviet art as a romantic, praising the wonders of machinery of the young state. Indeed, everything at the time seemed marvelous, illuminated by bright sunshine and subservient to the power of the mind. Thus appeared the progress in the paintings of the artist, and in the best Soviet poetry. Undoubtedly, the main themes in the paintings of Labas – speed, movement and technical perfection.
According to biography of Alexander Labas, he studied at the Imperial Stroganov School of Industrial Art in the studio of F. Rerberg, then in the studio of I. Mashkov. Since 1917 he continued his studies at the State Art Studios (VHUTEMAS) in the workshops of F. Malyavin, Konchalovsky, Kazimir Malevich, Kandinsky, P. Kuznetsov, K. Istomin, and A. Lentulov. However, the same as many of his colleagues of the time, served as the artist of the 3rd Army of the Eastern Front (1919). Then, at the invitation of V. Favorsky taught painting and chromatics in the All-Union State art workshops (since 1924). In 1920 – 1930-ies engaged in stage design of performances at the Theater of the Revolution, named after VF Komissarzhevskaya and the State Jewish Theater (GOSET). In addition, Alexander Labas made panoramas and dioramas for the Soviet pavilion at the World Exhibition in Paris (1937), and the World’s Fair in New York (1939), as well as for the Main Pavilion of All-Union Agricultural Exhibition (1938-1941). Alexander Labas – one of the founding members of the OST (Society of Easel Artists).
END_OF_DOCUMENT_TOKEN_TO_BE_REPLACED 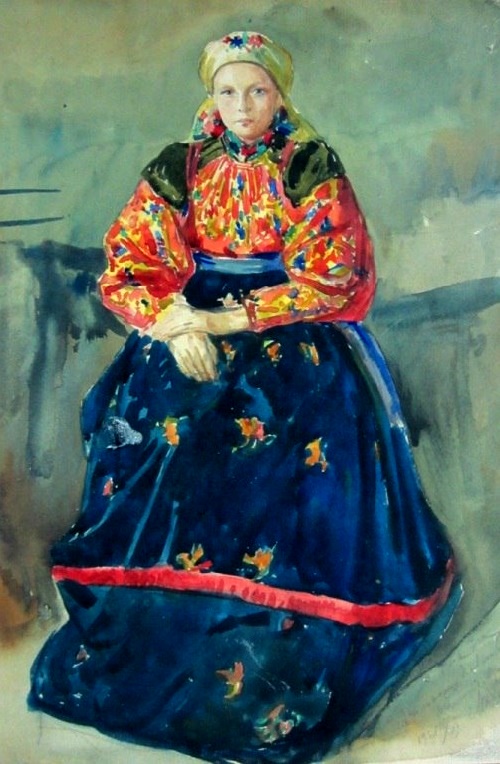 Soviet painter Mikhail Platunov
Born in the village of Cheremis-Turek of Vyatka Province, Mikhail Platunov began to paint under the guidance of his father – a talented self-taught icon painter. In 1906 he graduated from art school in Kazan and entered the Higher Art School of the Imperial Academy of Arts, where his teachers were professors P. Chistyakov and V. Savinsky. After graduation from the Academy in 1914, just the year when the First World War began, he had to serve as the front-line artist. And already after the revolution, he taught at the Petrograd workers’ clubs and schools. In addition, participated in exhibitions of the Association of Artists of Revolutionary Russia, and performed a series of portraits of famous artists. Noteworthy, Soviet painter Mikhail Platunov actively participated in the construction of the young Soviet State. In particular, in the 1925-1931 traveled as part of the All-Union geological expeditions to distant and little-investigated regions of the Polar Urals, Abkhazia, Turkestan, Pechora and Kamchatka. Also, in 1937, by the icebreaker “Sadko” traveled to the Arctic. The accumulated experience, as well as sketches while traveling, formed the basis of subsequent works.
END_OF_DOCUMENT_TOKEN_TO_BE_REPLACED 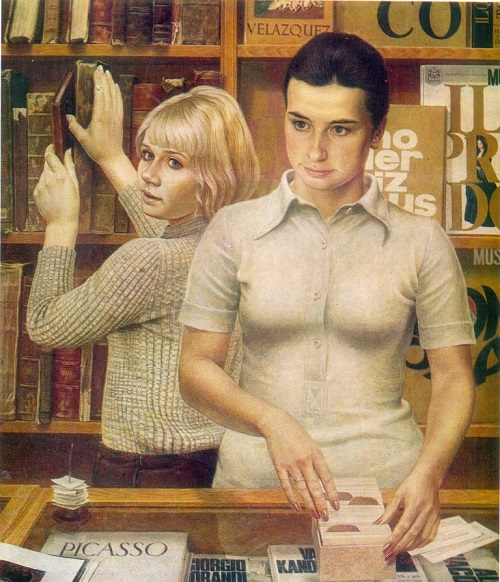 Soviet portrait painter Valery Habarov
Bright representative of Soviet art, member of the USSR Union of Artists since 1982, Valery Habarov is a silver medalist of the USSR Academy of Arts (1977 and 1982), and winner of the Prize of Lenin Komsomol (1977).
Valery was born on August 4, 1944 in Michurinsk. While his mother Zinaida Dmitrievna comprehended the profession of medical assistant-obstetrician, the Great Patriotic War began. So, she went to front and worked in a field hospital. Fortunately, she stayed alive, but at war she lost her husband, father of Valery, when he was still a baby. Meanwhile, for some time grandparents looked after the boy. But after the war ended, his mother and stepfather took the boy with them. Fortunately, the boy grew up in a creative family, where his parents loved him and tried to develop his creative abilities. And very soon they noticed his incredible interest in drawing.
END_OF_DOCUMENT_TOKEN_TO_BE_REPLACED 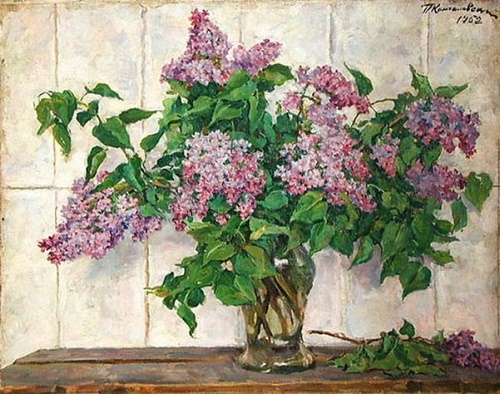 Soviet Russian artist Pyotr Konchalovsky – Academician of the USSR Academy of Arts (1947), People’s Artist of the RSFSR (1946), and Winner of the Stalin Prize of the first degree (1943).
But first of all, Konchalovsky was the famous avant-garde artist, creator and later the head of “The Jack of Diamonds” society of avant-garde painters. And now, he is one of the most expensive Russian artists in the world. Also, he is the founder of the famous Russian-Soviet artistic dynasty of Mikhalkov-Konchalovsky.
Meanwhile, in 1902 he married Olga Surikova, daughter of the artist Vasily Surikov, who highly appreciated the talent and creativity of Petr Konchalovsky. However, when Vasily Surikov first learned that his daughter Olga was going to marry a student of the St. Petersburg Academy of Arts Pyotr Konchalovsky, he was cursing and crying all night. Moreover, he even broke furniture and demanded the impossible: to cancel the wedding. But Olga was adamant, because she could not break the oath. Olga and Pyotr vowed to each other to create an extraordinary family. And they did.
END_OF_DOCUMENT_TOKEN_TO_BE_REPLACED