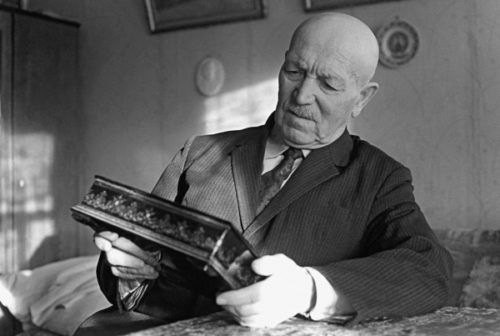 Zinoviev Nikolai Mikhailovich – one of the founders of Soviet Palekh art, teacher of the Palekh Art School, People’s Artist of the USSR.

At the time of submission to the title of Hero of Socialist Labor. Lecturer at the Palekh Art School, People’s Artist of the USSR. 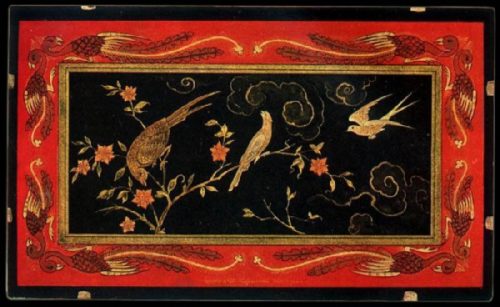 Birds. Panel sketches for the Lacquer Office in Petrodvorets (Monplaisir), 1944

Born on May 7 (20), 1888 in the village of Dyagilevo, Vyaznikovsky district, Vladimir province, now Palekhsky district, Ivanovo region, into the family of an icon painter. Russian. He was trained first under the guidance of his father, then in one of the icon-painting workshops, and from 1902 to 1906 in the educational and icon-painting workshop of the Committee of Trusteeship of Russian Icon Painting, where, in addition to studying ancient Russian painting styles, academic drawing, painting, anatomy, and perspective were taught.

In 1907 he left for Moscow. He studied at the icon painting workshop, then worked as an icon painter. While living in the capital, he visited the Tretyakov Gallery, where he got acquainted with Russian realistic art. He painted from nature, painted landscapes, trying to master the technique of oil painting, tried himself in a portrait. In 1914 he took part in the painting of the church of St. Panteleimon in New Athos (Greece).

Member of the First World War, demobilized for health reasons. Returned home. In the early 1920s, he was the chairman of a collective farm in his village. In August 1926, being already a rather experienced master, he joined the Palekh Artel of Ancient Painting. He quickly mastered the technique of lacquer miniature. 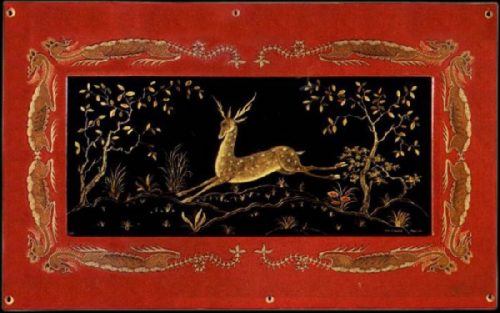 Deer. Panel sketches for the Lacquer Office in Petrodvorets (Monplaisir), 1944

In 1928, a vocational school was organized at the Artel, and N.M.

Zinoviev became one of her teachers. In 1935 it was reorganized into an art technical school, and a year later into the Palekh art school named after A.M. Gorky. The artist devoted all his vast experience and knowledge of old traditions to this work. Summarizing the experience of the oldest teachers, based on personal experience, he independently developed a methodology for teaching Palekh mastery. Zinoviev trained hundreds of Palekh artists. 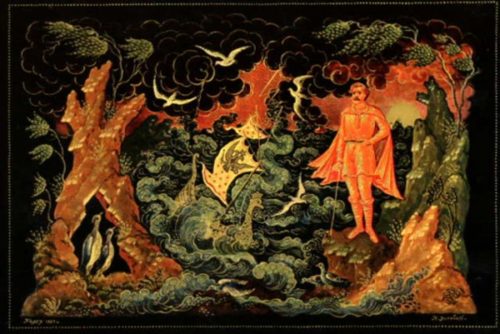 In addition to lacquer miniatures, Zinoviev was also engaged in monumental painting.

For example: painting of children’s institutions and houses of culture in Baku (1961), Ivanovo (1937), Leningrad and other cities), and restoration (frescoes of the Assumption Cathedral of the Moscow Kremlin (1947), Trinity Cathedral in Zagorsk, Lacquer cabinet of the Monplaisir palace in Petrodvorets (1955) -1959)), sketches of costumes for theatrical performances (Ivan Schwartz’s ballet “Wonderland” (1942)), book illustrations, easel painting. 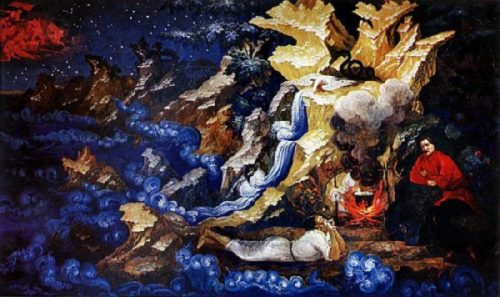 Song about the Falcon, a fragment of the mural in the Leningrad Palace of Pioneers named after A.A. Zhdanov. 1936

By the decree of the Presidium of the Supreme Soviet of the USSR of May 19, 1978, for his great services in the development of Soviet fine arts and in connection with his ninetieth birthday, Nikolai Mikhailovich Zinoviev was awarded the title of Hero of Socialist Labor with the Order of Lenin and the Hammer and Sickle gold medal.

Despite his advanced age, he led an active lifestyle. Almost every day I went to Palekh on foot, leaning on a stick, and continued to teach at the school. He wrote memoirs about the artists of Palekh. Died on June 4, 1979. Buried in the village of Palekh. 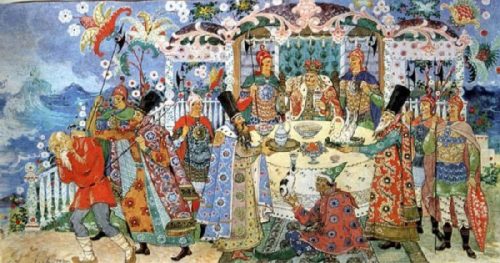 The Tale of the Fisherman and the Fish. 1937

Author of the books “The Art of Palekh”, which has gone through several editions, and “Stylistic traditions of the art of Palekh”, published in 1981, after the artist’s death. These publications are still reference books for students, teachers, artists of Palekh. 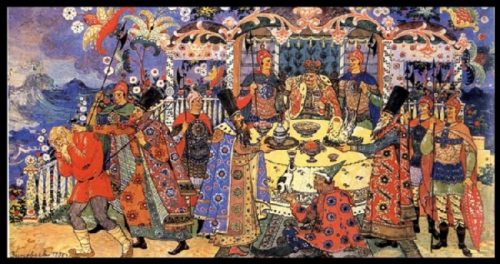 Zinoviev N.M. The Tale of the Fisherman and the Fish Fragment. 1937, plate

He was awarded the Orders of Lenin and the Red Banner of Labor, medals.

In 1984, in Diaghilevo, in the artist’s family home, a house-museum of N.M. Zinoviev. A street in Palekh bears his name. In 2002, a scholarship named after N.M. Zinoviev. The master’s works are kept in many museums in the country and abroad.