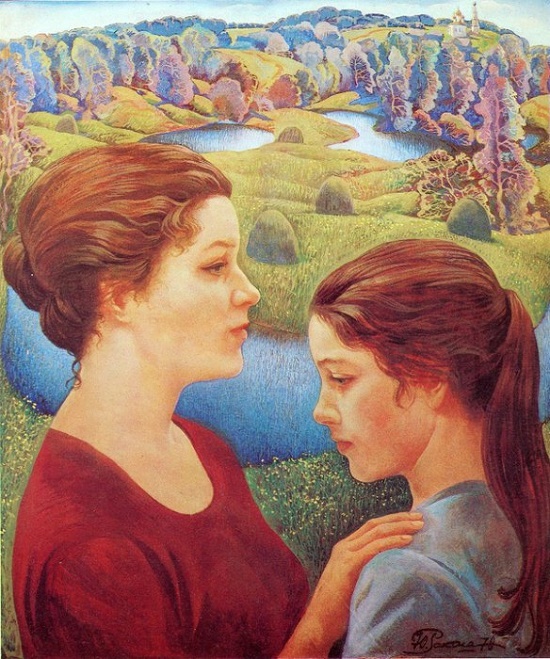 Soviet artist Yuri Mikhailovich Raksha (December 2, 1937 – September 1, 1980) was a famous art director of cinema. Born Yuri Mikhailovich Terebilov, he later took his wife’s surname and became Raksha. The boy grew in a family where his mother and grandmother knitted the famous Orenburg shawls. However, the fate of this Soviet artist was like from a Soviet movie. Thus, 16-year-old Yuri, all alone went from Ufa to Moscow. He wanted to study and had to survive working as a loader. And soon he was lucky enough to get a job as an artist on Mosfilm. In addition, Yuri traveled to the taiga with oil geologists.
In fact, paintings of Raksha define him as socialist realism artist. But in addition to brave conquerors of the north and friendly bohemia, Raksha loved to draw his wife: in clothes and without, different techniques, funny and sad, young spouse and mother. Irina Raksha was the love of a lifetime. 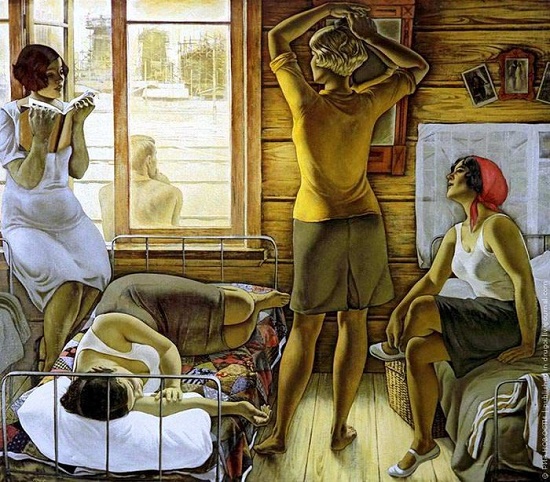 According to the artist, he did not remember his mother to be young. She worked at a factory as a laborer. War, post-war hunger … And by 1950, when the father returned home, the mother, according to the memories of her son, was already quite old. However, he managed to feel her young years, in particular, the artist dedicated his painting “My Mom” to her.

In 1954, after finishing eight classes, Yuri left with a wooden suitcase with drawings to Moscow. A lucky chance helped him. In Moscow lived his uncle, who worked as a cleaner. Once he rubbed a parquet in one of the apartments, and showed to the owner the works of his nephew. By the way, the owner of the apartment was a member of the USSR Academy of Fine Arts, twice winner of the Stalin Prize Dmitry Nalbandyan. He himself took Yury’s drawings to the director of the secondary art school at the Surikov Institute of Fine Arts, and the talented young man without hesitation became the fifth grade student.

Silver medal graduate of the art school, Raksha entered the Faculty of Artists of Cinema of All Union Institute of Cinematography, from which he graduated with honors (1963). For fifteen years he was the artist-director of the studio “Mosfilm.” He participated in the creation of many domestic films, still memorable to us. In particular, “Time, Forward!”, “Dersu Uzala”, “Ascent”, and more.

Noteworthy, for his work in the Soviet-Japanese film “Dersu Uzala” (directed by Akira Kurosawa), Yuri Raksha received an Oscar in 1976. In all, he created more than 200 paintings and illustrated about twenty books. Besides, more than 200 paintings of the artist are in the Tretyakov Gallery, the Bashkir State Art Museum, and private collections. However, during his life, Yuri did not have a single personal exhibition. All took place after his death.

The works of Yuri Raksha participated at nineteen exhibitions, including personal ones. In particular, in cities and countries: Moscow, Leningrad, Zagorsk, Irkutsk, Paris, London, Germany, Mongolia, Poland, Holland, and Tokyo.

Yuri Raksha died in 1980 from the acute form of leukemia in Moscow. Buried at the Vagankovskoye Cemetery.

Pencil portrait of Larisa Shepitko – director of the film ‘Ascension’

Triptych ‘Cinema’. The idea (in the center – Larisa Shepitko)

Kulikovo Field. Triptych, dedicated to the 600th anniversary of the Battle of Kulikovo. Tretyakov gallery

Zsuzsa and Janos from Budapest. 1979