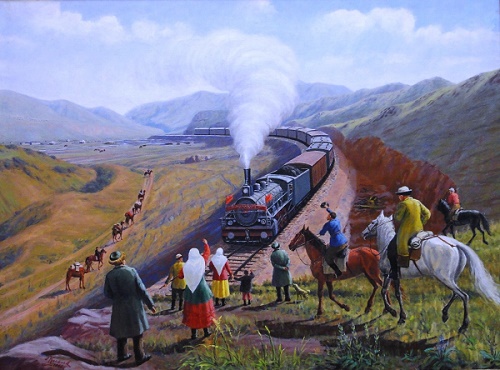 Soviet Kazakh artist Abylkhan Kasteyev – an outstanding painter and the founder of Kazakh fine arts. Member of the USSR Union of Artists (1940), Kasteyev is an original artist, distinguished by his own style and ability to convey his love for his native land on canvases.
People’s Artist of the Kazakh SSR, laureate of the State Prize of the Kazakh SSR Abylkhan Kasteev was born on January 10, 1904 in the village of Chizhin, Panfilov district of the Taldy-Kurgan region. He studied at the N. Khludov Art Studio in Verny (Alma-Ata, 1929-1931). Participated in exhibitions since 1934.
Kasteyev painted more than a thousand paintings in oil and watercolors. Some of his works are on display in the State Tretyakov Gallery, in the State Museum of East Nations Art, in the Central Museum of USSR Revolution by Lenin Order in Moscow, and in the State Museum of Fine Arts of Kazakhstan (renamed after Kasteev), and in the other museums of the country 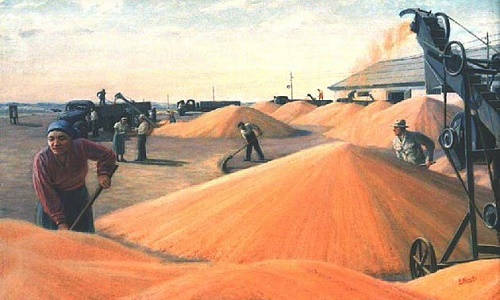 Born on January 14, 1904 in the village of Chizhin near the town of Jarkent (now Almaty region) into the poor cattle-breeder’s family, Abylkhan loved to paint from childhood. Besides, he loved doing various crafts. His mother, Aigansha, weaved carpets, koshma, alash, sirmaki, various decorations of the yurt, applied patterns on them, and made wicker mats from the taunyard and chia. The boy from childhood watched all these processes, and helped his mother to cut out the ornament and select pictures.

From 1929 to 1931 Kasteyev studied at the art studio of Nikolai Gavrilovich Khludov (who then lived in Kazakhstan). Early having lost his father, he began his career first as a farm laborer at the bai, and then as a worker in the construction of the Turksib railway.

In 1930, Abylkhan Kasteyev made his first trip to Moscow. In 1934, he participated in the meeting of amateur talents in Alma-Ata, and in the republican contest for the creation of Abay’s portrait and illustrations for his works. B esides, he took part in the first exhibition of works of Kazakhstan artists, which took place at the State Museum of Oriental Art in Moscow. Since that time, Abylkhan Kasteyev has become a regular participant in international, all-Union, republican and city exhibitions.

In 1966, A. Kasteyev was awarded the State Prize of the KazSSR for a series of watercolors “On the Land of Kazakhstan”, the Order of the October Revolution (1967), two Orders of the Red Banner of Labor, and the Order of the Badge of Honor.

Camping yurt of the shepherd

Happiness. Romantic couple in the field

Horsewoman among the mountains. 1963. paper, watercolor

In the mountains. 1940s. Watercolor

Monument to A. Kasteyev in Alma-Ata at the State Museum of Arts of the Republic of Kazakhstan named after Kasteyev