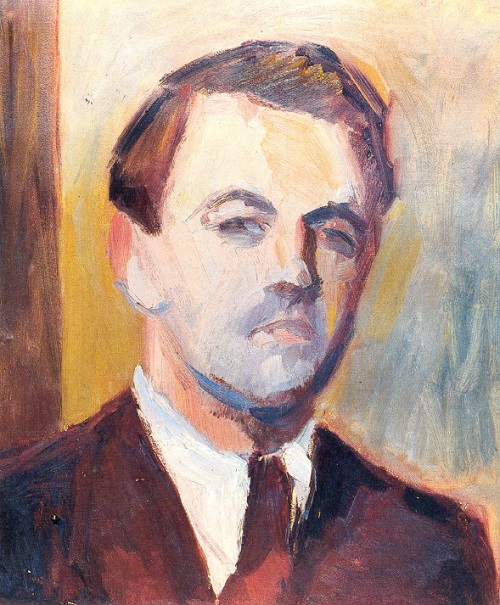 The Kemerovo Art Gallery stores paintings of Mysterious Soviet German artist Hans Preuss, a man of strange and mysterious fate. He was born on 1 September 1904 in Königsberg, Germany (now Kaliningrad, Russia). Hans studied at the Königsberg Academy of Visual Arts in 1920-1923. His teachers were Professor R. Pfeiffer and A. Degner. While studying in the Academy, he participated in numerous group exhibitions and training courses in Berlin, Dresden, Nuremberg, Munich. In 1933 Hans Preuss emigrated from Germany and visited Austria, France, Switzerland, Poland, Sweden, Finland, and finally – the USSR. Here, he got the Soviet citizenship in 1939. The World War II began. In 1942 he was evacuated to the western Siberia – the city of Novosibirsk, later moved to Tomsk (1943–1956). In 1946 he became the member of the Union of artists of the USSR. Since 1956 he lived and worked in Kemerovo. With his paintings he traveled all over Siberia – Tomsk, Omsk, Irkutsk, Barnaul. Once, in 1964 he visited his native Germany with the exhibition of his paintings in Berlin, but returned back to Siberia. Hans Preuss died at the age of 80, 2 February 1984, in the Siberian city of Kemerovo. German by nationality, communist by belief, he lived all his life in Siberia, and was the Soviet citizen.

In 1939, taking the citizenship of the USSR, he settled in Moscow, but in the beginning of the war, as a person of German nationality, was deported to Siberia and ended up with his wife in an internment camp. It is not known how, but two months later the Comintern members (since the days of leadership of Ernest Thalmann) and foreign agents of foreign Soviet intelligence Jurgis Preiss and Gertrude Gennis were released. But it was wartime, and no merit could not give full freedom. Two years they have lived in the village of Oyash of Novosibirsk region, in anticipation of a residence permit in Tomsk, and a year later Gertrude died of tuberculosis.

Hans Preuss married a teacher of Tomsk Medical Institute Yevgenia Ivanovna Gontar-Zamotrinskaya. During these years, Preuss became a member of the Union of artists, he exhibits works at trade shows, but in general, does not stand out against the background of the artistic life of the city, in spite of an excellent education. In Tomsk, he had not made friends with anyone from the artistic environment.

Hans Preuss has been married three times and always his women were bright and strong, and had a great influence on his destiny. With his first wife, he became a communist and a spy. It was a time of great hope in their lives. They traveled a lot. In Paris Preuss held his first solo exhibition. Perhaps creative profession was a kind of cover for the young KGB. In addition, we must remember that it was a forced exile. After the war, he earned for a living illustrating anatomical atlases for the Department of Anatomy of the Tomsk Medical Institute, headed by his wife, and painted custom portraits. Preiss himself called these years “taken out of art.” In 1956 Evgenia leaves for Kemerovo to Medical Institute, and Preuss leaves Tomsk forever.

He will live in Kemerovo until 1984, widowed and married for a third time again. This will be a period of calm and more active creatively.

In the early portraits Hans Preuss never painted face in detail – and it was barely noticed. To the artist was more important to transfer his excited state. Therefore, the portraits of the artist, in seeming simplicity, internally are always deeply emotional, personal.

The image of human legend Alfaro Siqueiros appears in the works of Hans Preuss not accidentally. They had known each other personally, and probably collaborated on the Comintern line. Mexican artist Siqueiros was also an activist of the communist movement. He participated in the Spanish Civil War. On the instructions of the NKVD Siqueiros was involved in a group of militants, code-named “Horse”, which was formed to eliminate Trotsky. Repeatedly the artist came to Moscow.
Portrait of Siqueiros is markedly different from earlier works of Preuss. The author seemed to deliberately imitates art of Siqueiros – energetic and audacious. On the canvas appears passionate, charismatic image, contrast and impulsive. 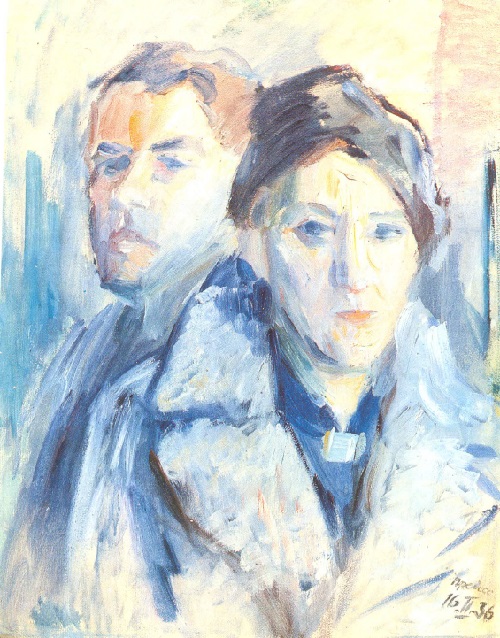 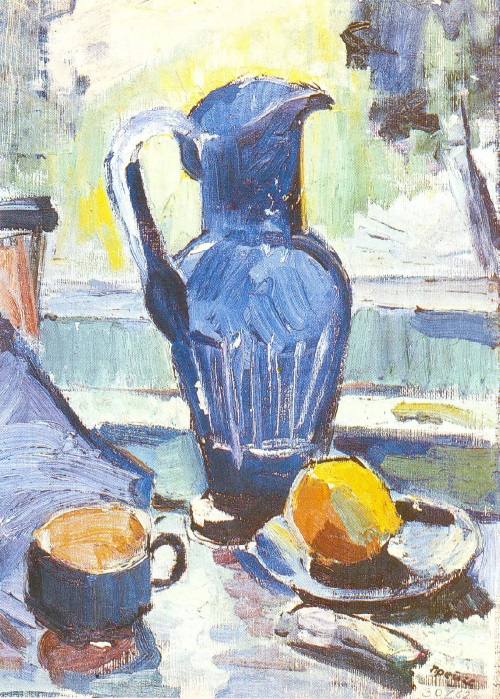 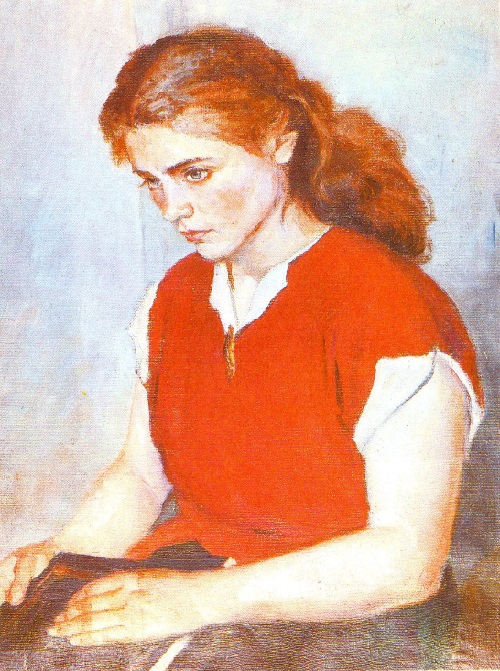 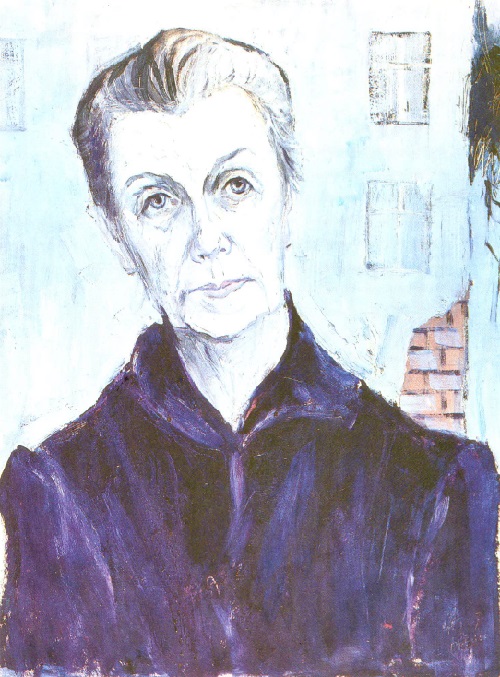 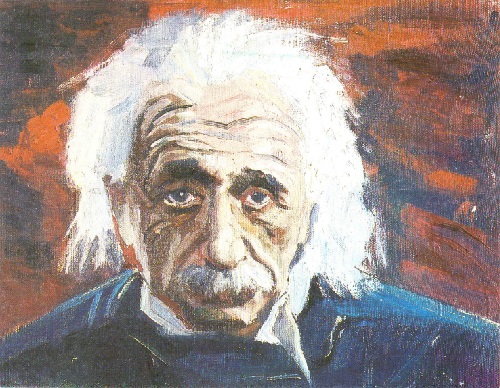 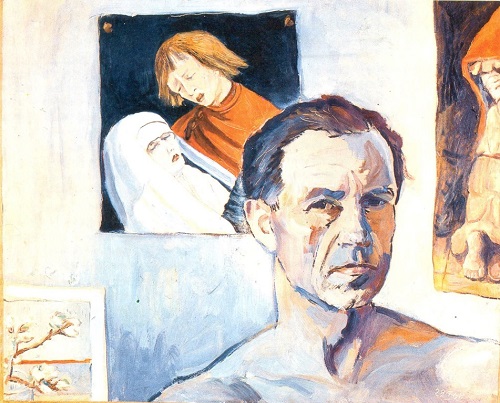 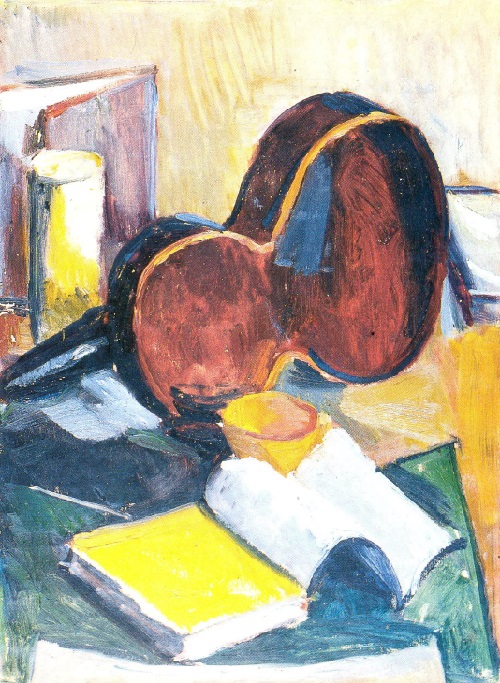 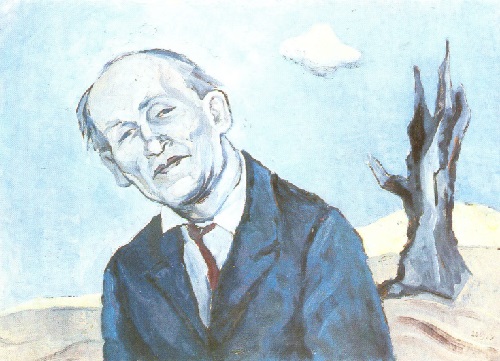 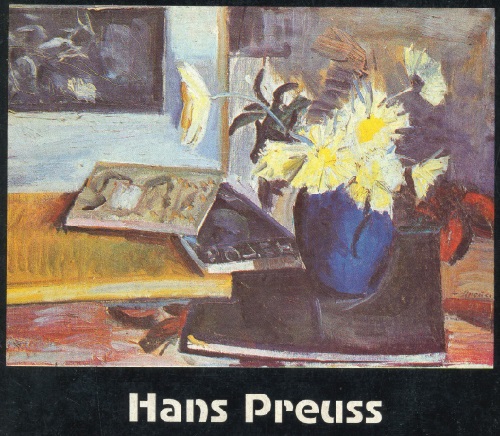 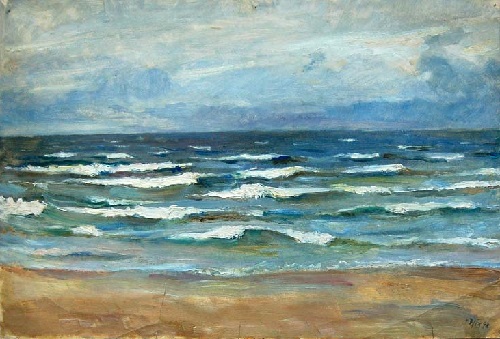 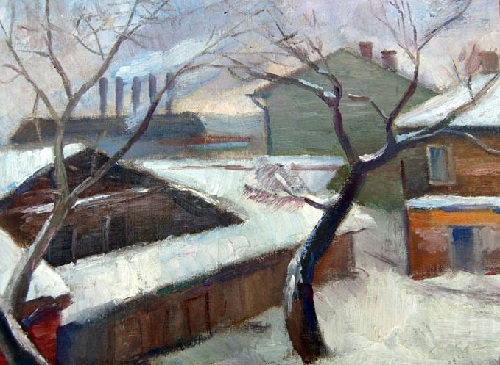 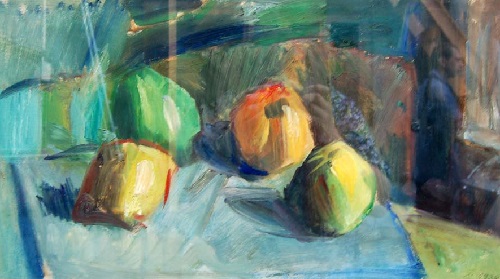 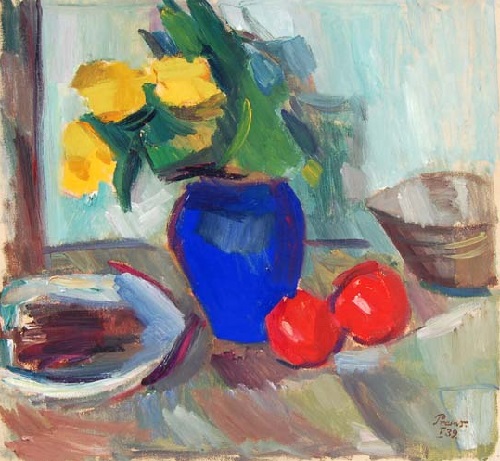 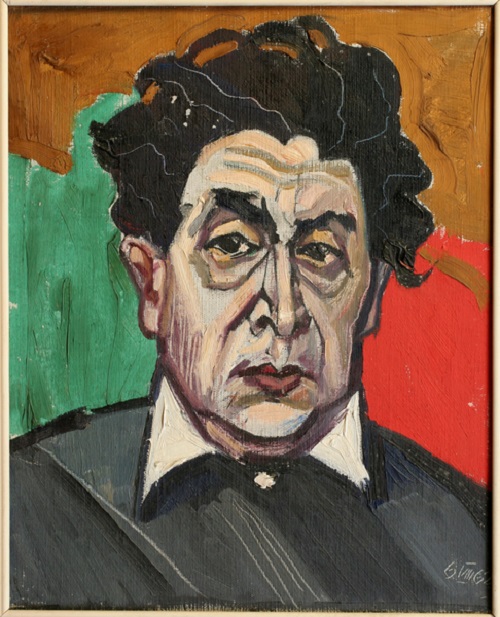 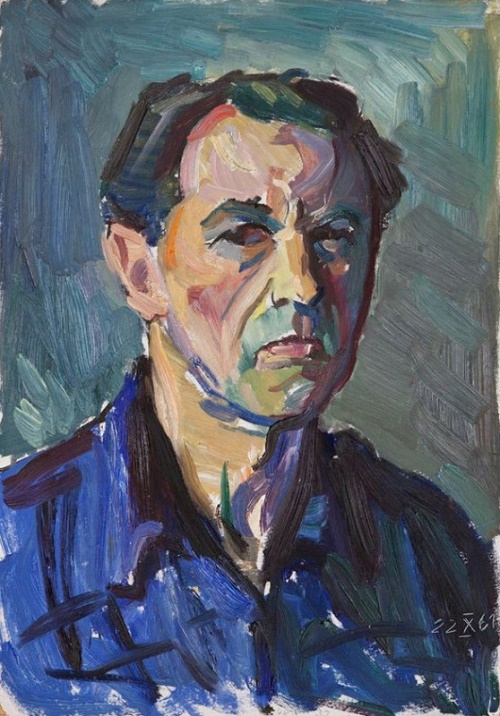 Self portrait. 1961. Hans Preuss, known in Tomsk as Yuri Preuss 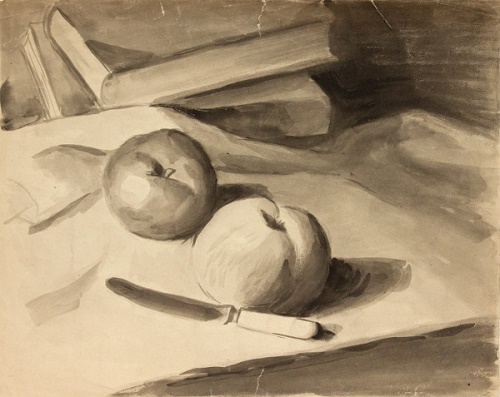 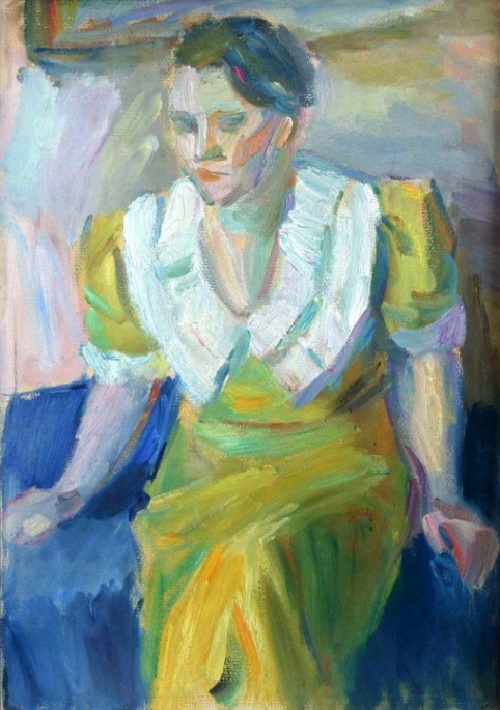 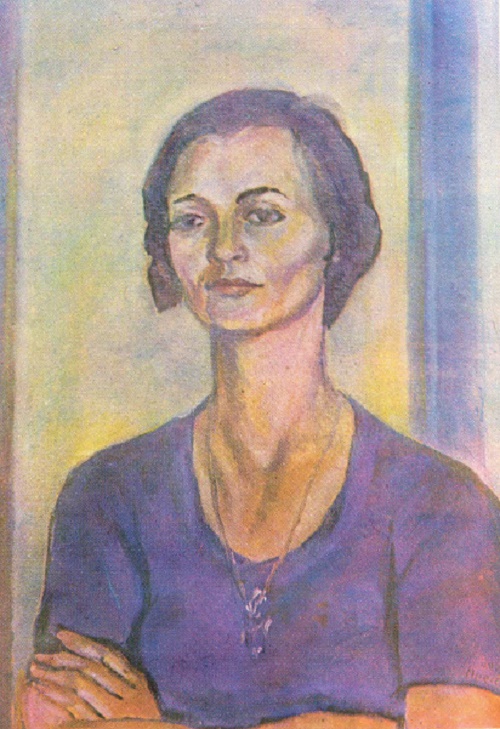