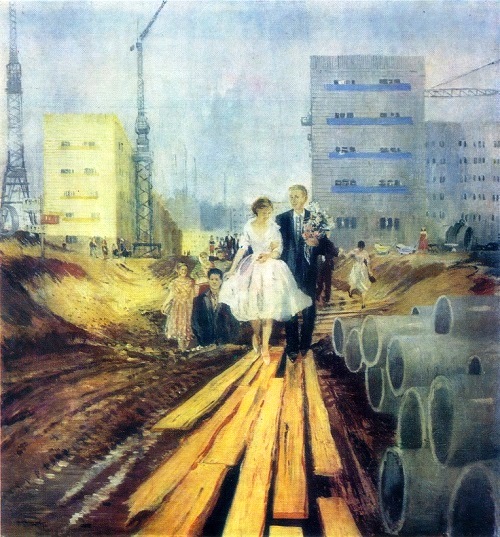 Soviet artist Yuri Pimenov (1903 – 1977) was a stage designer, graphic artist, teacher, professor. Academician of the Academy of Arts of the USSR (1962), Corresponding Member (1954), People’s Artist of the USSR (1970), the winner of the Lenin Prize (1967) and two Stalin Prize of the second degree (1947, 1950). Yuri Pimenov was born in Moscow in a family of lawyers. He studied at the 10th Moscow gymnasium. In 1920-1925 he studied at Higher Artistic and Technical Workshops (VHUTEMAS), painting and graphic arts department. From 1923 he worked in magazines. After graduation in 1925, he became one of the founders of the Easel Artists Society. 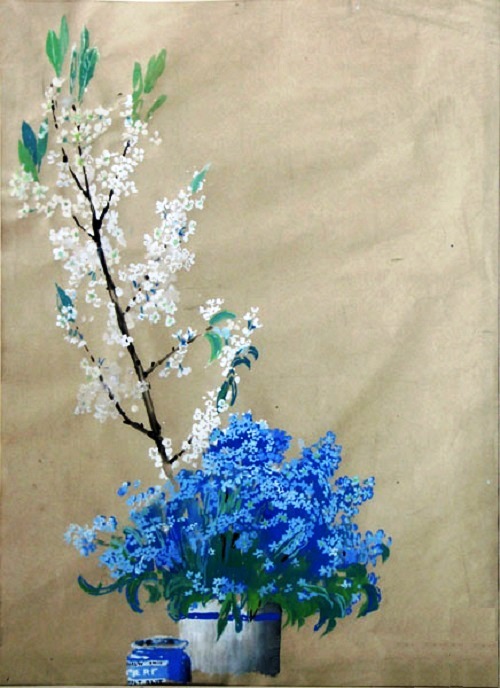 In the early period Pimenov experienced a great influence of German expressionism, which largely explains the hysterically-dramatic poignancy of his best paintings of these years: “Invalids of War” (1926, Russian Museum), “Give us the heavy industry” (1927); “The soldiers are moving to the side of the revolution” (1932, both – in the Tretyakov Gallery). Over the years, he moved to the updated impressionism, confessing creative principle “beautiful moments”, light and artistic image-impressions. He worked in the theater and decorative art. Yuri Pimenov – Master of film posters, which used elements of easel painting. In 1954 he was elected a corresponding member in 1962 – a full member of the USSR Academy of Arts.

In 1966 Yuri Pimenov signed a letter, among other 25 figures of culture and science to the General Secretary of the CPSU of Central Committee Leonid Brezhnev against the rehabilitation of Stalin.

Yuri Pimenov died on September 6, 1977. He was buried in Moscow at the Novodevichy cemetery.

Soviet artist Yuri Pimenov about himself:

“I love to paint rain. This world can be a very beautiful, if a person is currently set at the beauty. If a person has bad at heart, if he is disappointed and sad, rain will put into him melancholy. Urban rain is full of different images and moods. It brings to the artist no less richness of sensations and feelings than the field, covered with gray veil of autumn, than the sparkling drops on pine branches, and the sun through the steamy air of wet forests. On the theme of rain in the city are created a lot of variations in art, and, of course, will be done very much in painting and poetry, and film. In fact, every day we are in a volatile nature, and only absolutely apathetic people are completely receptive and indifferent to it”.

Poster for the play ‘Talents and Admirers’. 1968

Pagliacci. From the series ‘The Mysterious World of spectacles’. 1969. Watercolor, pastel

Night in the city