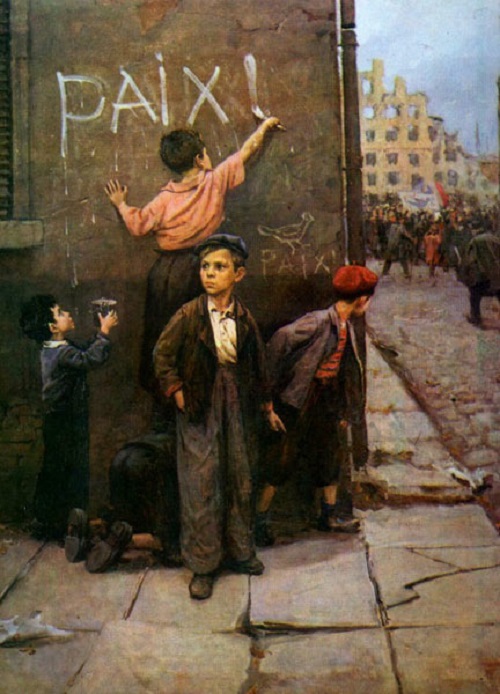 Soviet artist Fyodor Reshetnikov
In the Soviet art of the postwar period were relevant pictures on the theme of the struggle for peace and international solidarity of the working people, against imperialism and the threat of a new war, as well as the development of national liberation and the labor movement abroad. This theme, which could be called an international, first received intensive development in biased Russian art from the beginning of the Cold War. The first pictorial approaches to new themes have been associated with the creation of genre paintings, scenes of which were drawn from the Soviet newspaper reports about strikes and demonstrations abroad. An example of this approach is the famous painting of Fyodor Pavlovich Reshetnikov “For Peace!”, awarded the USSR State Prize in 1951. Reshetnikov clearly depicted street worker suburbs of Paris. Away – a demonstration under a red flag. Thus, the demonstration of ideologically correct, and no wonder it dispersed by police. In the foreground – a group of fearlessness children writing on the wall the magic word “Peace.”

Fyodor Pavlovich Reshetnikov was born 28 July 1906, in a small village of Dnepropetrovsk region, into a family of icon painters. He lost his parents early and was raised by his elder brother, a student at the Kiev Art School, who had to leave school to support his family. He painted icons for churches and houses, and Fyodor helped him mix paints, prepare the canvases.

As a young boy, he began wandering in search of work. His “pictorial experiments” Reshetnikov applied in the design of clubs, provincial theaters; combined “art” with the work of the choir leader, artist, sports instructor, but he did not leave the desire to learn. Since he had no secondary education, he had to enter the Art Department of workers’ school.

In 1929, after the workers’ school, Reshetnikov entered the Graphic Faculty of Higher Art and Technical Institute (VHUTEIN), workshops of DS Moor and SV Gerasimov. While still a student Reshetnikov, fascinated by the creativity of Kukryniksy, became famous as a virtuoso of graphic caricature, which has helped him to become, as an artist-reporter, the participant of polar expeditions on icebreakers “Siberians” (1932) and “Chelyuskin” (1933-1934). Participation in the expedition was very important for Reshetnikov, and he put a lot of effort to get there. During his first trip to the North artist drew a lot.

The next trip, which took place in 1933-1934, was more dramatic. Hike the famous “Chelyuskin” was an ordeal for the whole crew, as well as for the artist. He was saved together with other sailors from the drifting ice floes and returned to the mainland. The work “The Death of Chelyuskin” (1973) was painted on the memoirs many years later.

In 1934 the artist graduated and began to work independently. Reshetnikov painted mostly on historical and patriotic themes. Following the success, the young artist turned to easel painting. In this area, he painted political works “Generalissimus of the Soviet Union, Stalin” in 1948, “Great Oath” in 1949 true to the ideals of “socialist realism”.

Reshetnikov taught at the Moscow State Art Institute of Surikov (1953-1957), the Moscow Pedagogical Institute of Lenin (1956-1962). Since 1953, the artist – member of the Academy of Arts of the USSR. Since 1974 – Vice-President of the USSR Academy of Arts. State Prize winner in 1949 and 1951. He was awarded two medals. His works are kept in the State Tretyakov Gallery, the State Historical Museum, the State Central Theater Museum of Bakhrushin and other museums. 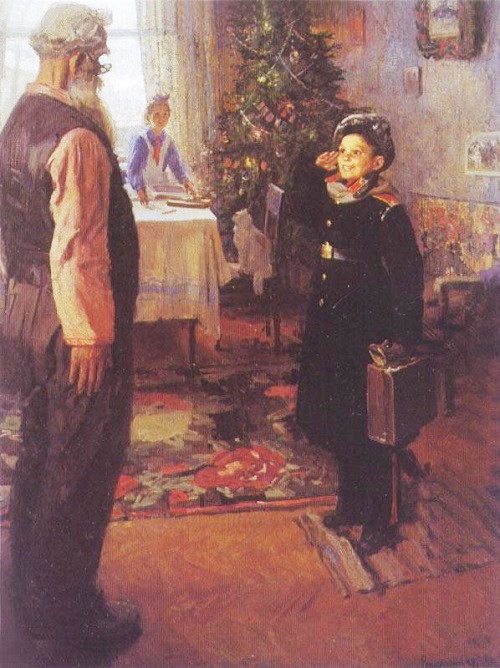 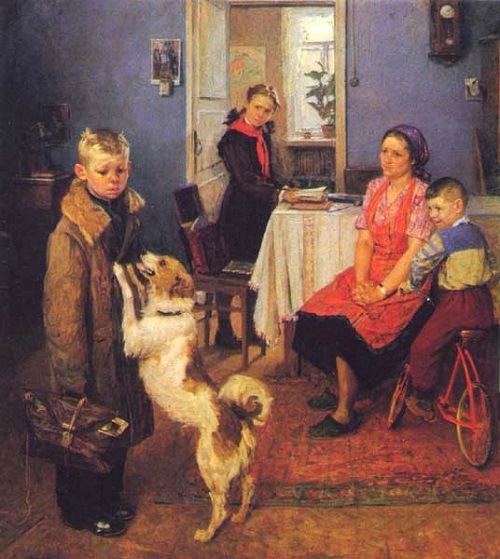 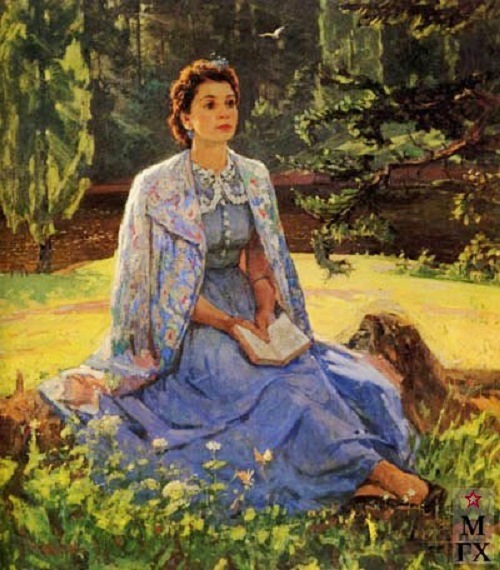 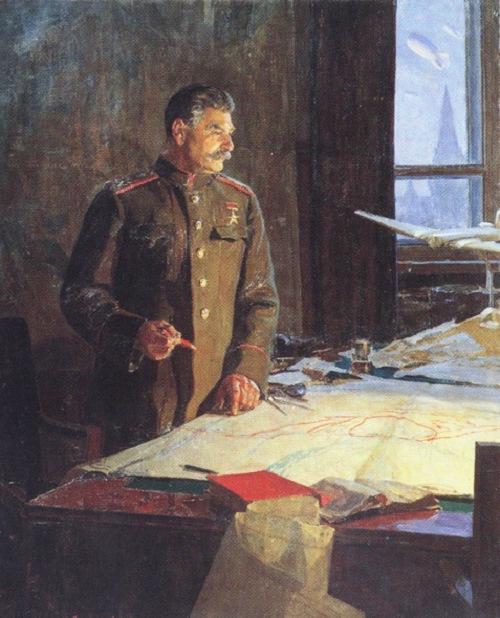 Generalissimus Stalin of the Soviet Union. 1948. The State Tretyakov Gallery 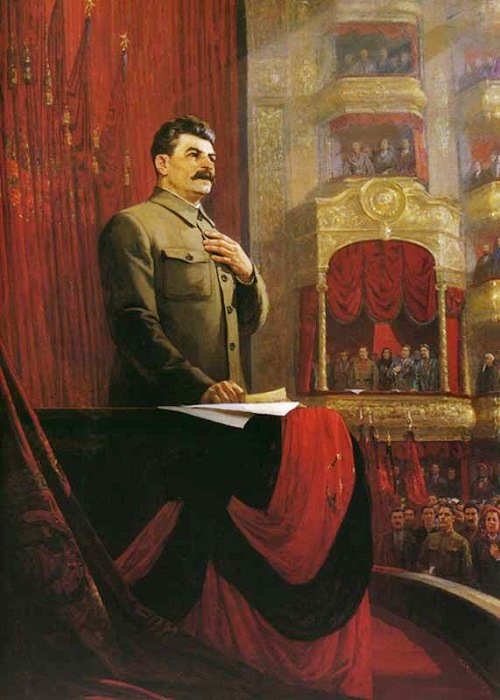 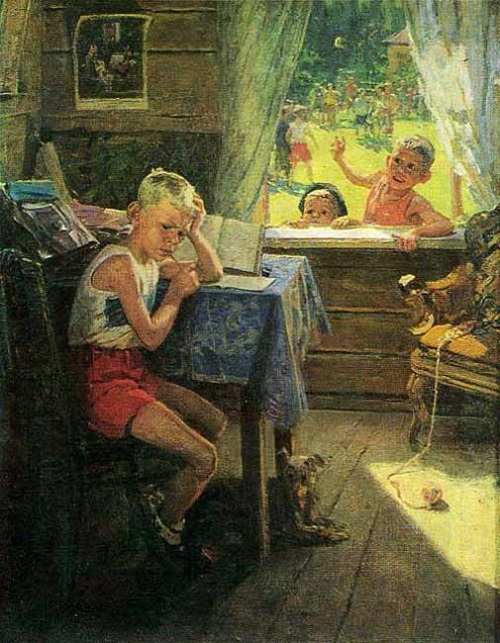 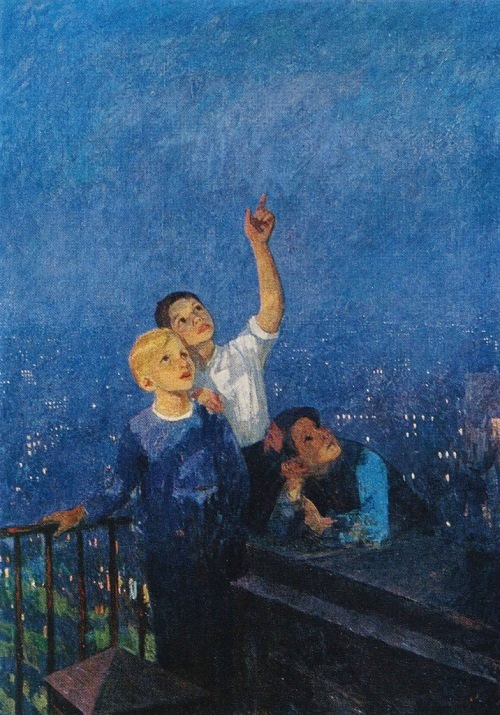 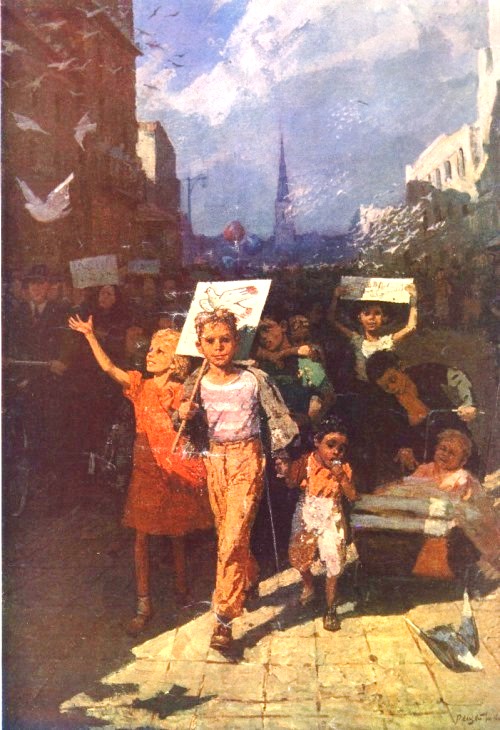 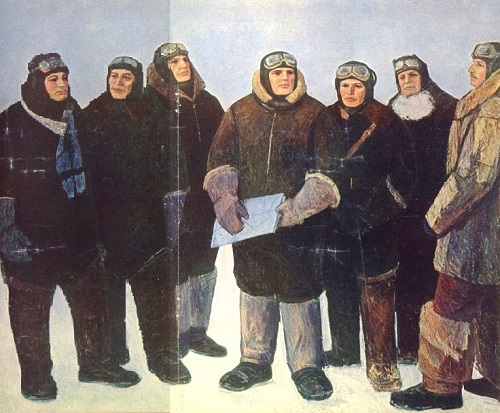 First Heroes of the Soviet Union. 1976 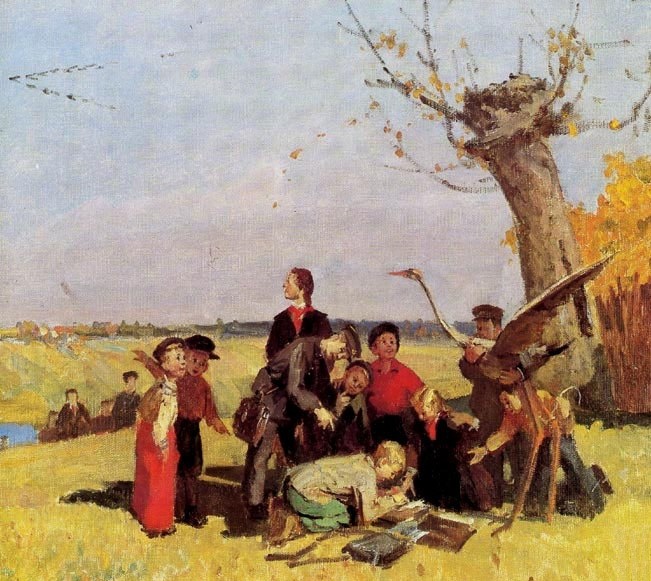 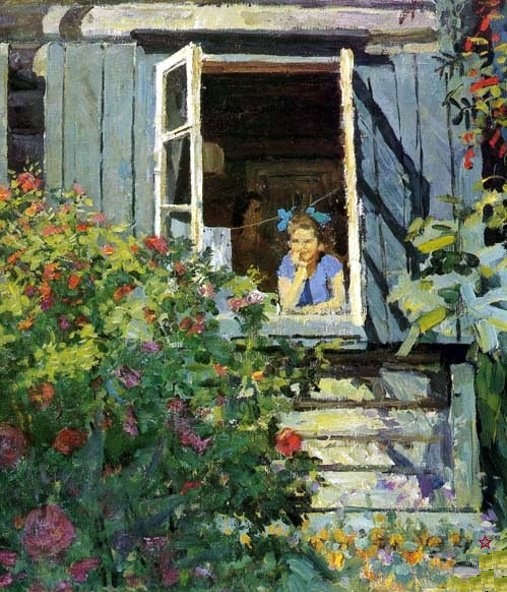 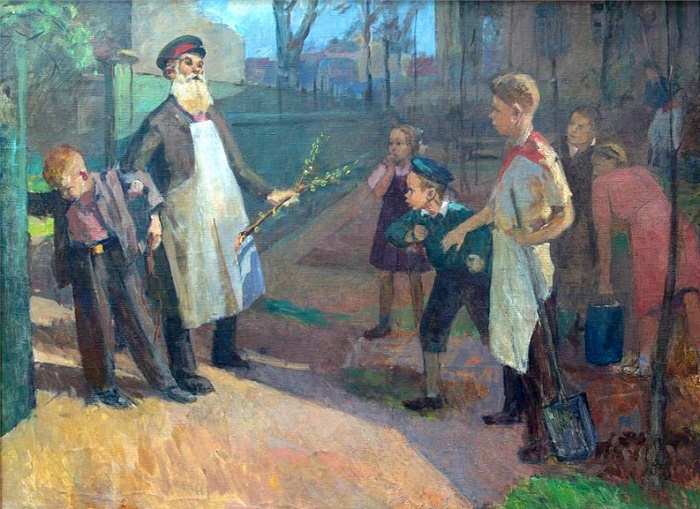 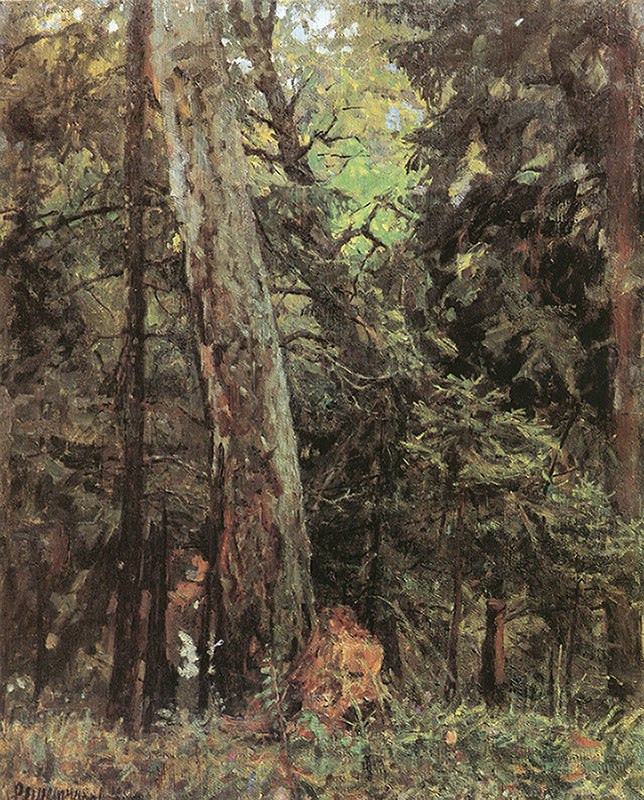 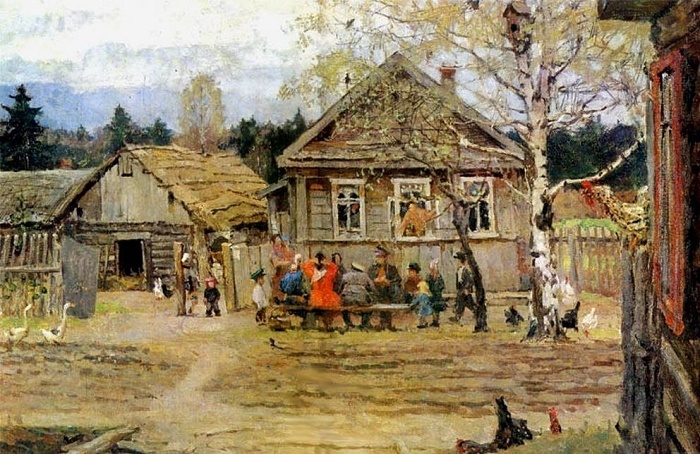 In the village of ‘Maly Gorodok’ 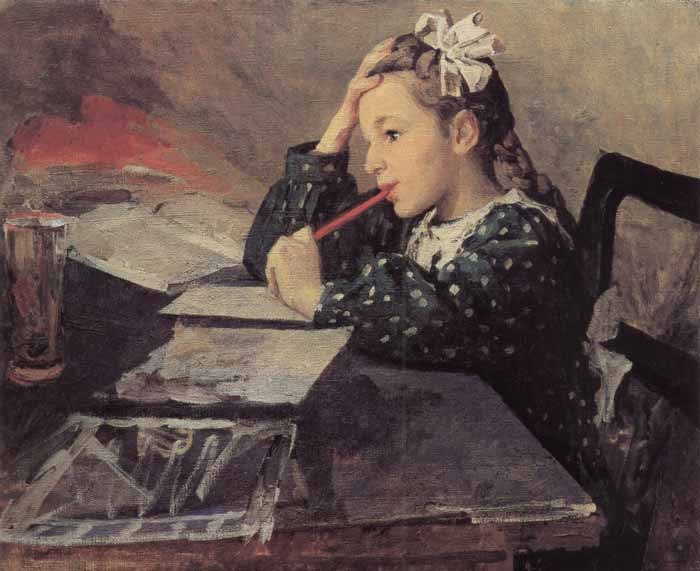 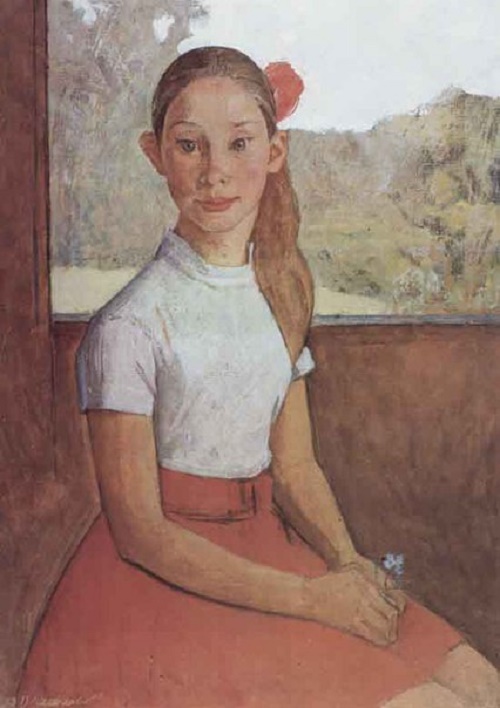 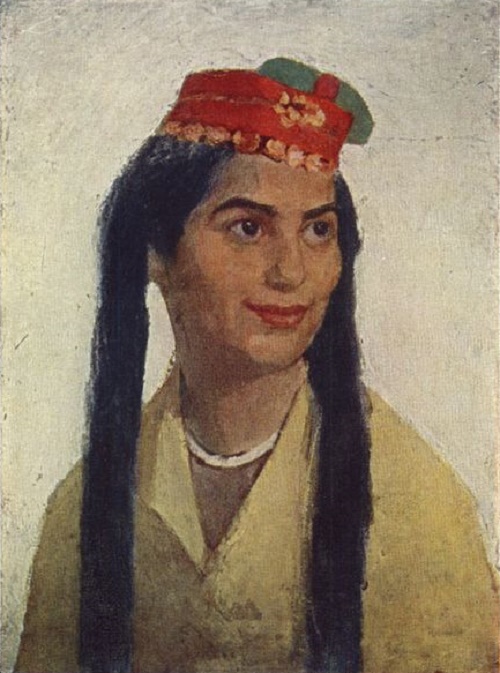 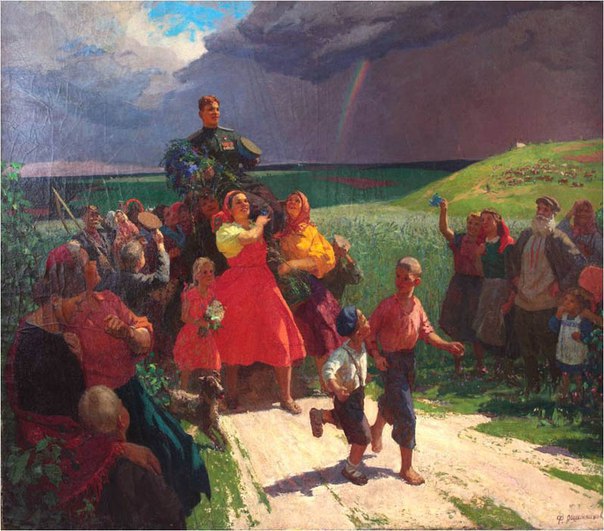 Congratulating on the Victory Day (Meeting of a hero). 1947 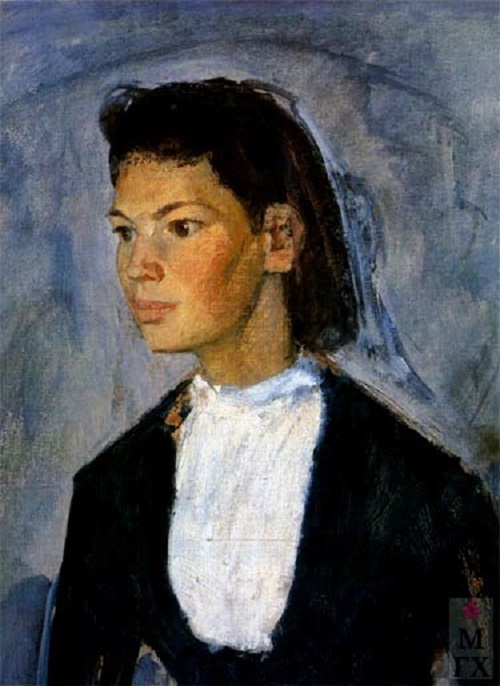 Portrait of a student girl. 1957. Fragment 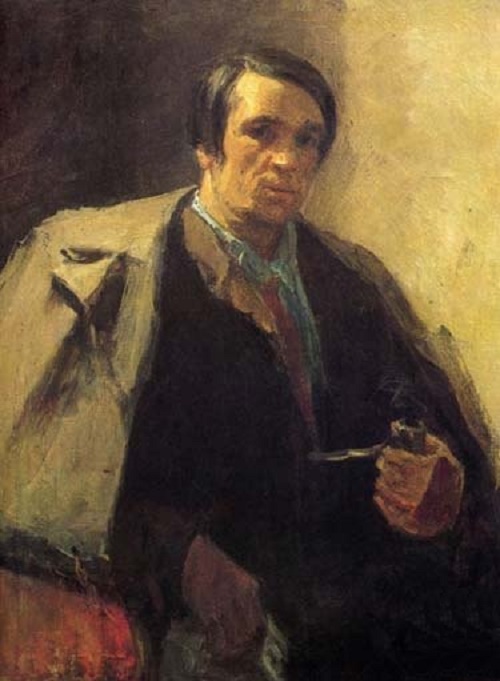 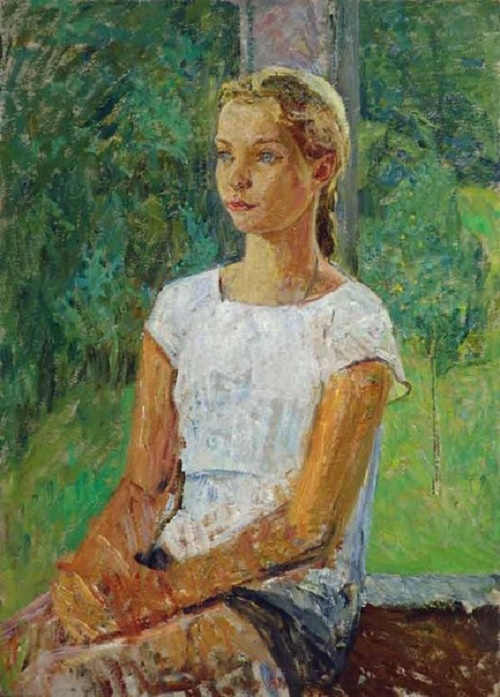 Sketch. A girl in a white t-shirt 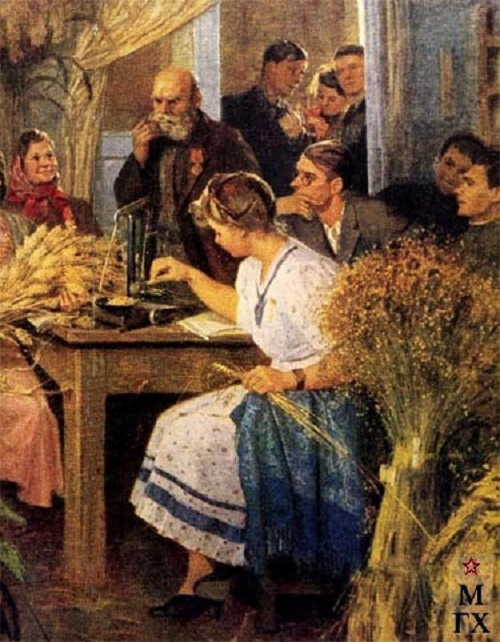