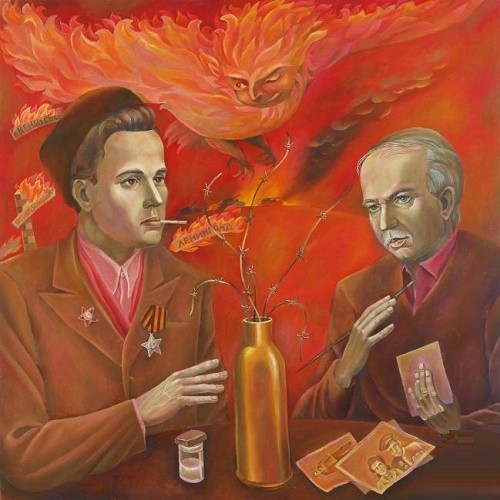 Father and son. 2015. Oil, canvas. Painted for the 70th anniversary of the Victory in the Great Patriotic War. Sons became older than their early departed fathers. The son remembers his father, the WWII member. Above them is a fiery bird of fate. Soviet Russian graphic artist Yuri Aksyonov (born 14 February 1950)

Soviet Russian graphic artist Yuri Aksyonov
Born on February 14, 1950 in Tyumen, Yury Alexeyevich Aksyonov studied in Leningrad. He completed two years at the Leningrad Higher School of Industrial Art named after Vera Mukhina. For six years (1971-1977) he worked as an artist-designer in the Tyumen branch of the Art Fund of the RSFSR. From the same period he began to participate in exhibitions of Soviet art. However, in 1977 he moved to Vladivostok for permanent residence. There, for 15 years (1977-1992) worked as an artist-designer in the Primorsky branch of the Art Fund of the RSFSR. In particular, he specialized in designing and sketching interiors, chasing, monumental painting, and easel graphics.
The artist works fruitfully both in painting and in graphics. But it is in the graphics that he is most organic, and it is in the graphics that his recognizable handwriting was formed. The works of Yury Aksyonov remind old frescoes. They are laconic, the figures are majestic and calm, and faces are distinguished by large, regular features. 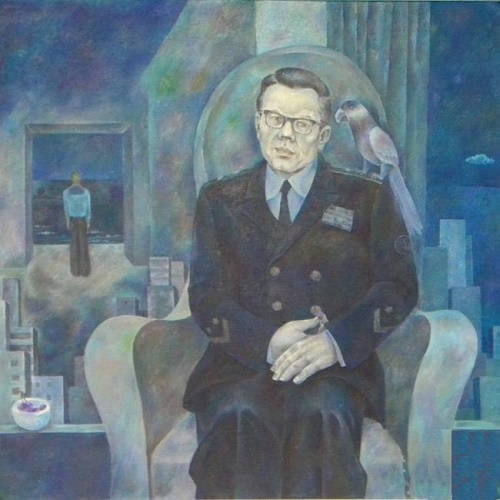 Portrait of a veteran submariner. The Submariner remembers the past. Hardboard, oil. 1984

The works of Yury Alexeyevich Aksyonov are in the Primorsky State Art Gallery, art gallery in Vladivostok, as well as in private collections in Russia, the United States, Japan, China, the Republic of Korea, Australia, and New Zealand. 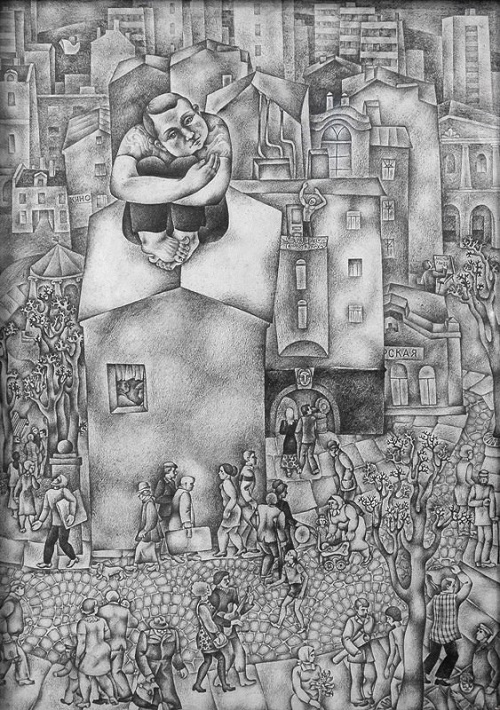 A boy and a city. From the collection of Primorye picture gallery 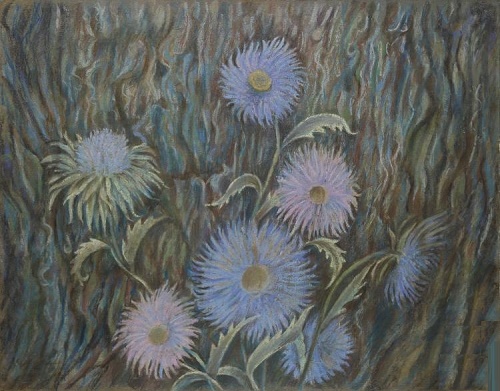 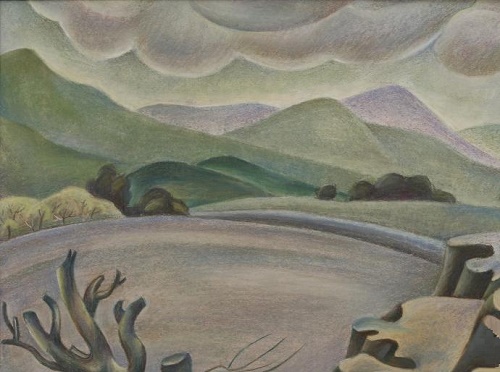 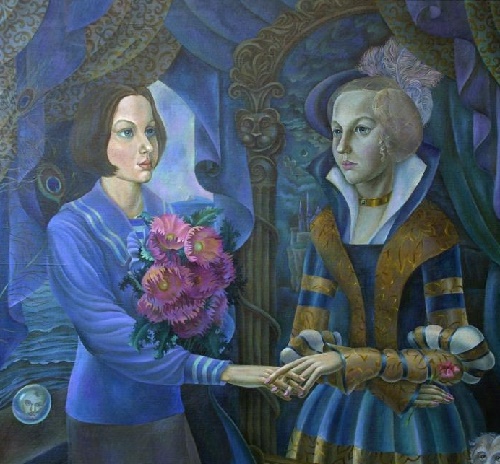 Canvas, oil. 1999. Portrait of a daughter. A meeting. The girl meets her image from another era 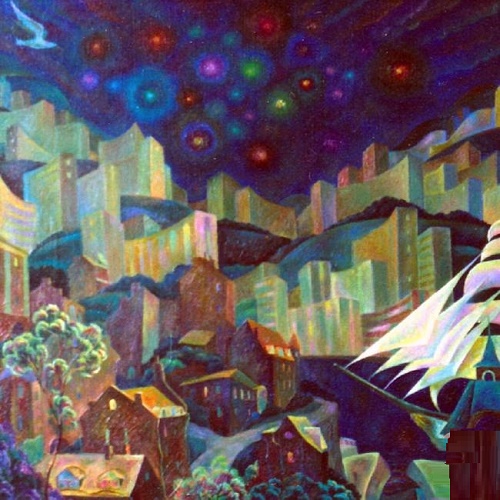 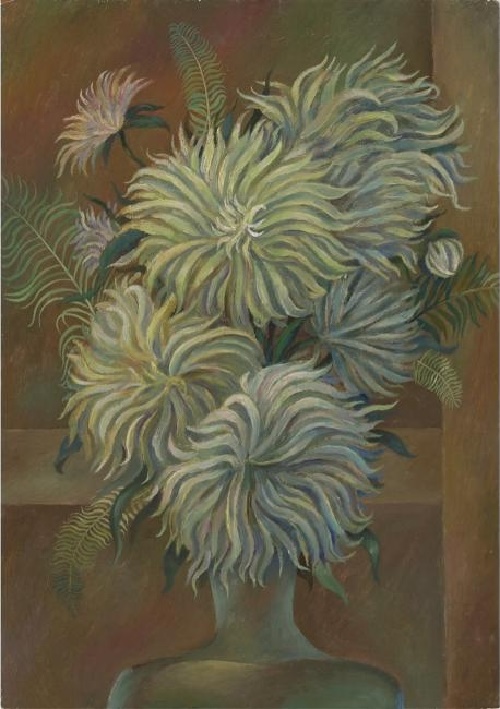 Flowers in the workshop, sketch. 1992 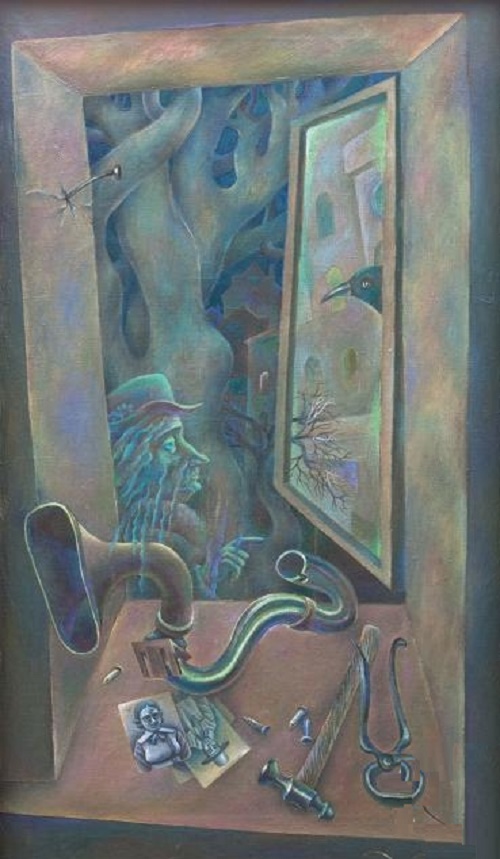 Ghost in the window. Open window, still life on the windowsill. A ghost passes by the tree. canvas, oil. 1976 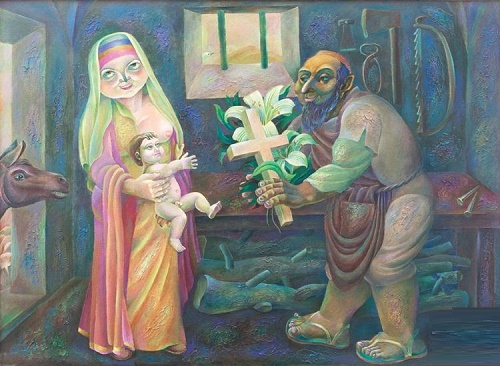 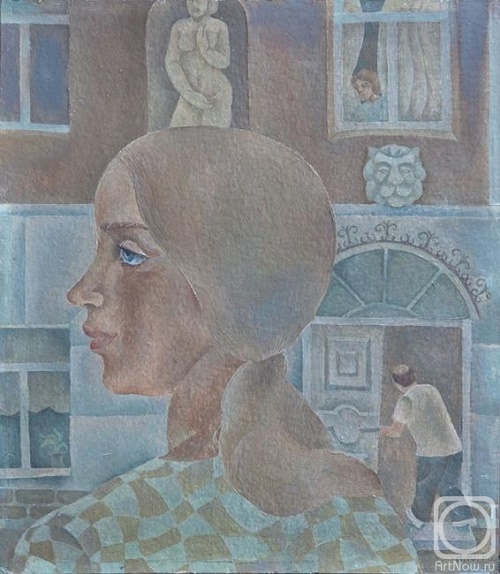 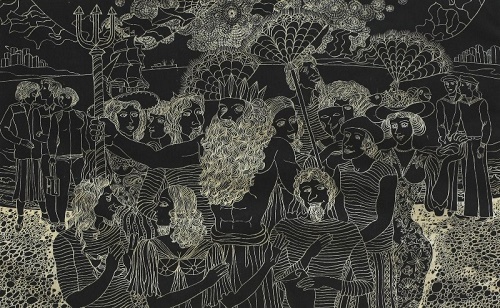 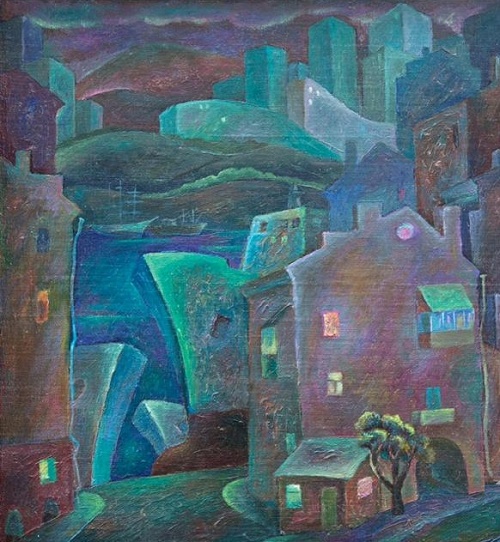 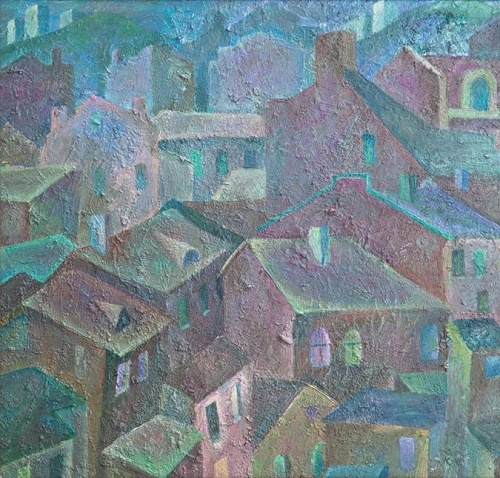 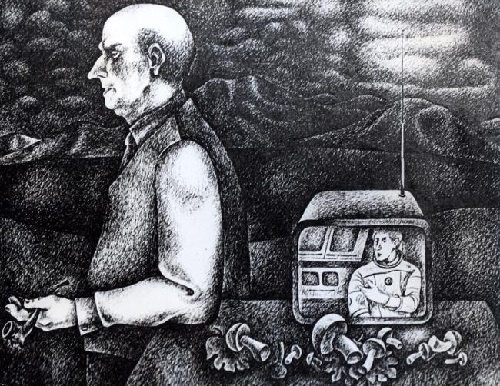 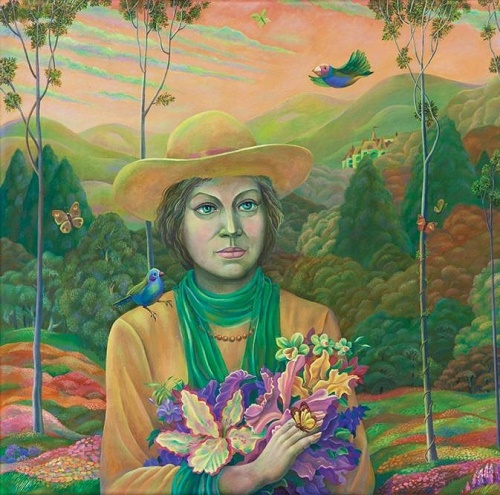 On a summer day, a lady with orchids in a park landscape. 2005. Oil on canvas 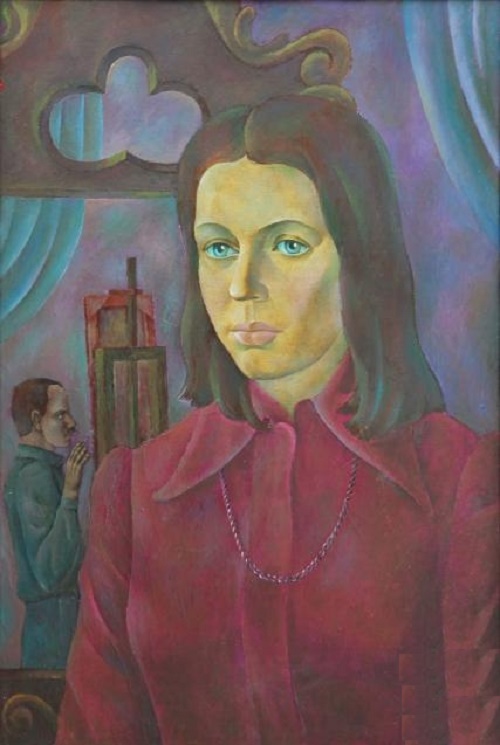 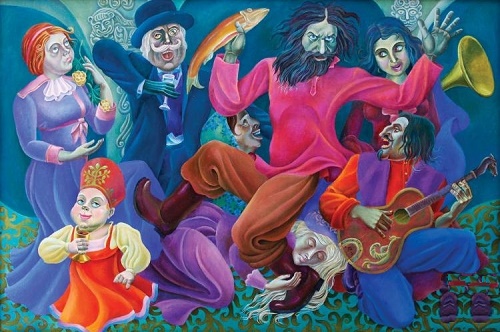 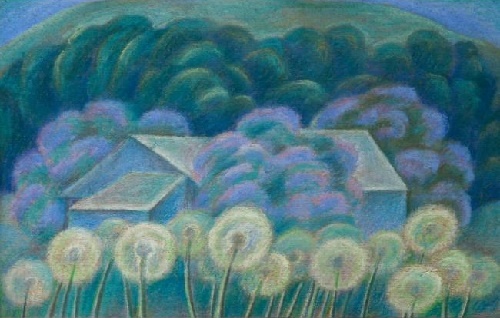 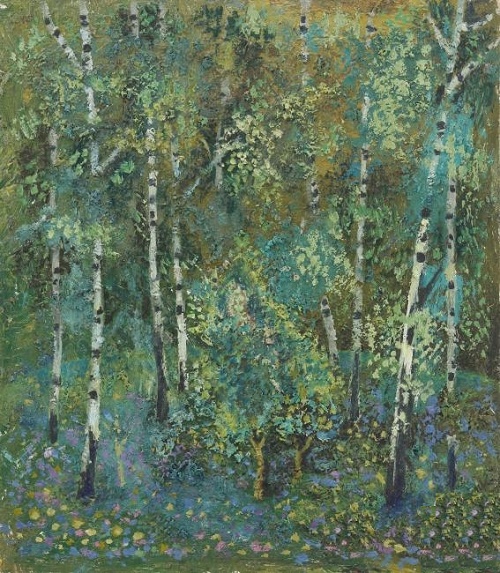 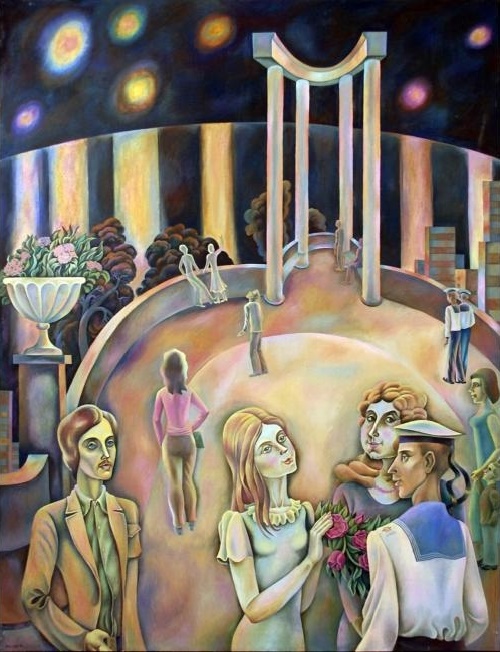 Walking along the waterfront on a festive evening. canvas, oil. 1993 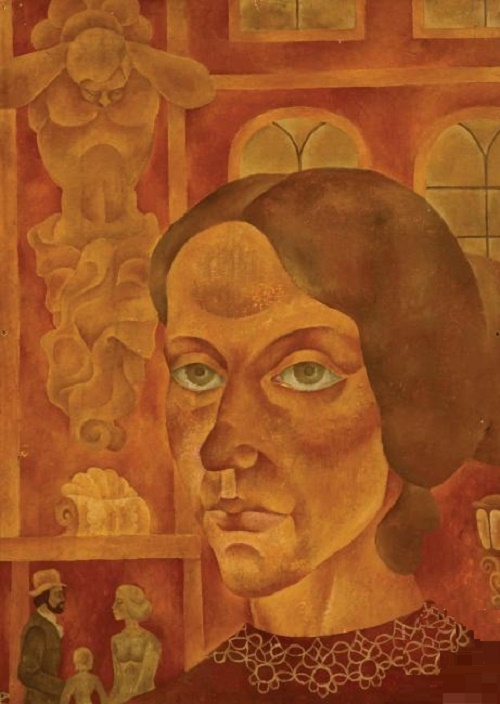 Woman and a museum. Woman on the background of a building in St. Petersburg. Oil on cardboard, 1972 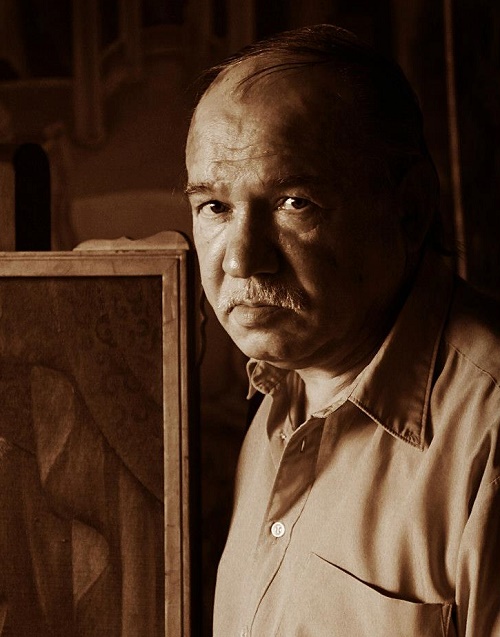