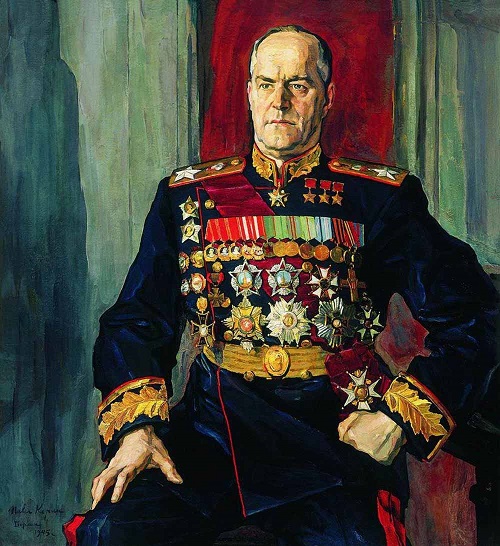 Soviet artist Pavel Korin wanted to “reflect the rebellious, proud spirit of our people.” And he painted landscapes of his native Palekh, portraits of unknown and famous people, without tiring to look at the fate of their manifestations of the “spirit of folk.” Among these works a special place occupies “Portrait of Marshal Zhukov” (1945). Moreover, even the creation of this painting began during the Great Patriotic War, when Korin painted triptych “Alexander Nevsky”, worthy of a place in the museum. The reproduction of “Alexander Nevsky” decorated front-line dugout of soldiers. Huge copy of the “Alexander”, made by a group of soldiers who stormed the ancient Novgorod, has been installed at its entrance. Soldiers were leaving for the West, and the legendary Russian commander called them to fight for the freedom. Thus, the art contributed to the victory.

And 1945-th. The Soviet flag is over the Reichstag. In June, the Soviet newspaper “Pravda” published a photo of our military commanders. Pavel Korin saved it and had the idea to paint the group portrait – painting “Defense Committee”. In the experience of the artist he knew that the idea is embodied only in dealing with nature. Newspapers, magazines, on the radio often told of Marshal Zhukov. June 12 he was awarded the third Gold Star of Hero of the Soviet Union, and on the 24th, he took Victory Parade on Red Square.

In the fall of 1945, Marshal and the artist met in Moscow. “Will two or three sessions be enough?” – Zhukov asked. “We need at least fifteen, or even twenty-one and a half hours. I take my work very seriously, just as do.”

In Moscow, Zhukov did not pose – urgent business required his presence in the Berlin group of troops. But civilians in Germany were not allowed, and the marshal ordered the artist to wear the uniform of the captain. In the morning of October 16, Korin flew to Berlin. From the very first sketches the author chased portrait composition. Time needed for work in a makeshift studio, lacked. The artist painted Marshal wherever he could find him. One aide of Georgy Zhukov gave Korin his photo – Zhukov and Rokossovsky accept foreign delegations. With this photo painter came to a meeting devoted to the anniversary of October. Zhukov sat on the podium. Just the right moment to paint him! But the notebook was not in his pocket. And Korin drew the sketch on the back of the photo …

Composing, author took into account the peculiarities of color and construction. Thus, a bright dress uniform, numerous awards, medals require very local background, but a dynamic, capable of withstanding the diversity of colors.

Korin himself said about the painting dedicated to Marshal Zhukov – the only portrait, which he did not want to leave, he would gladly have left it at home.

Knowing about the relation of the artist to the portrait, the mood, owned by the author during the creation of the painting, the widow of the outstanding master Praskovya Tikhonovna Korina said:
– Portrait of Marshal Zhukov – One of the best works of the artist. There is not a single colorless, indifferent smear. This portrait confirmed the words of Paul Korin, who said: in the painting, the artist must know the effect of each stroke, be responsible for each line, for each circuit, for each silhouette. More importantly – that it was not “sleepy brush.” The essence of the portrait is not only in resemblance, although it is absolute. In the work can be heard the thunder of war and the echo of the victory; it embodies the pride of the people who religiously believed in the triumph of good.

Creating mosaic plot compositions of the assembly hall of Moscow University, a few subway stations and lobbies in Moscow became a natural extension of the creative ways of Soviet artist Pavel Korin. Working on the mosaic, he carefully studied and used of new materials. Many forces Korin gave to restoration heading the restoration workshop of Fine Arts Museum of AS Pushkin for twenty-seven years.

In 1961, P. Korin and his wife traveled to Italy. There he became acquainted with Guttuso, and decided to paint his portrait. The artist agreed to pose. Portrait was created in 12 sessions, each lasting three hours. At the All-Union Exhibition 1961 work of Pavel Korin was first presented to the audience and immediately gained universal acceptance. Now Portrait of Renato Guttuso is stored in one of the largest art collections in the State Russian Museum. 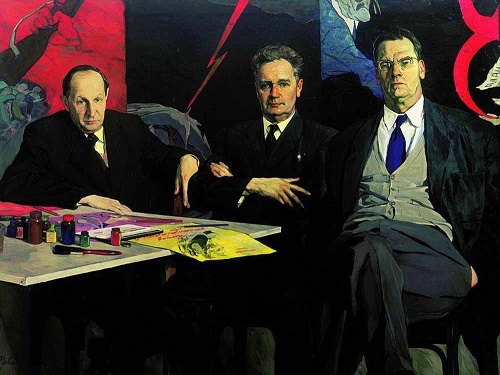 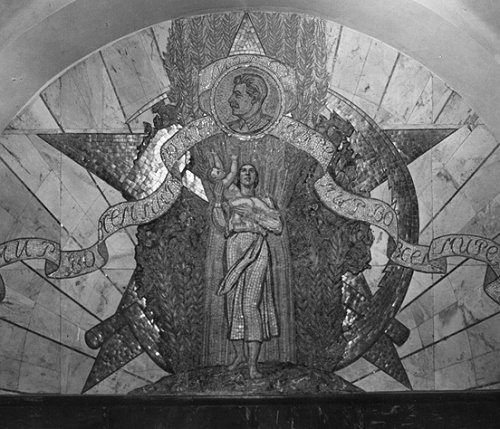 Mosaic panno with the image of mother with a child and the portrait of Stalin above them. Moscow Metro 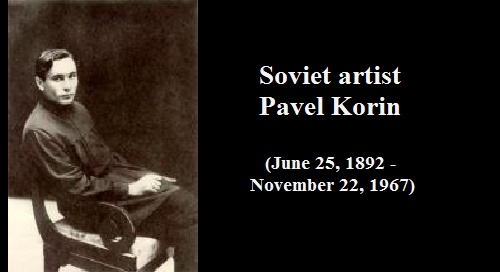 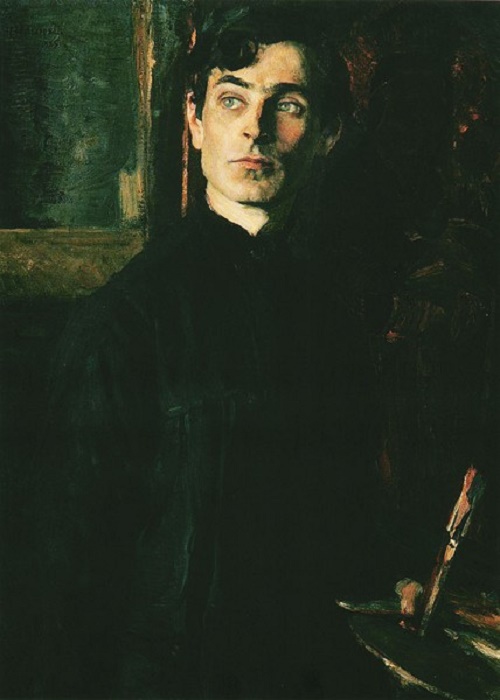 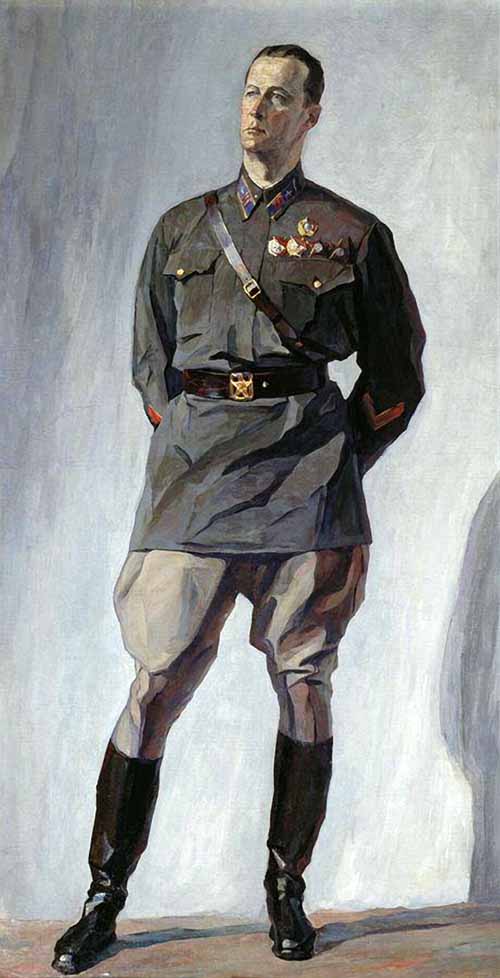 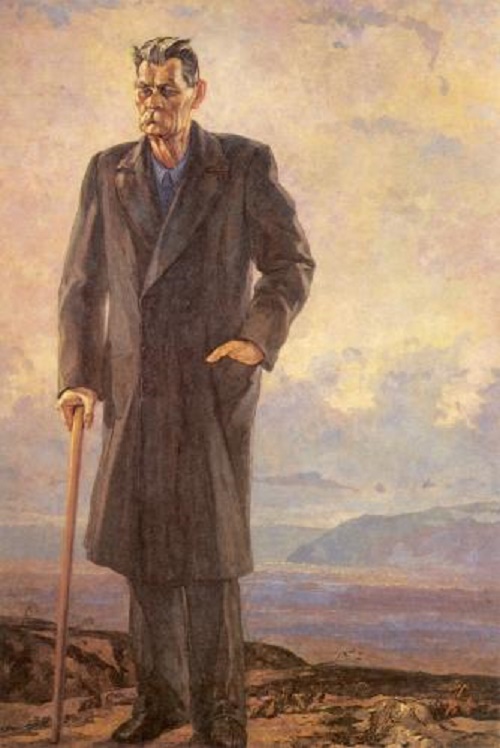 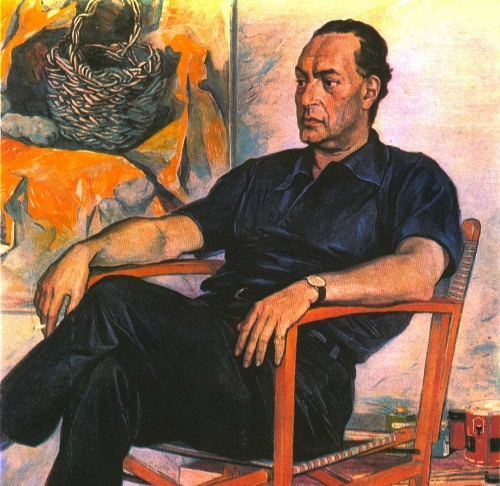 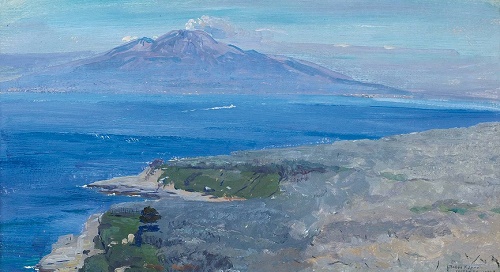 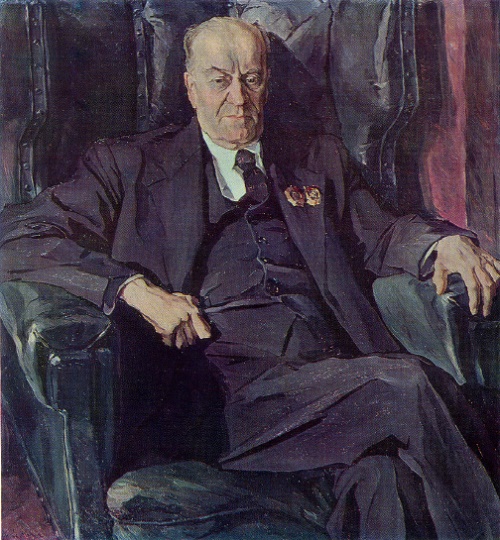 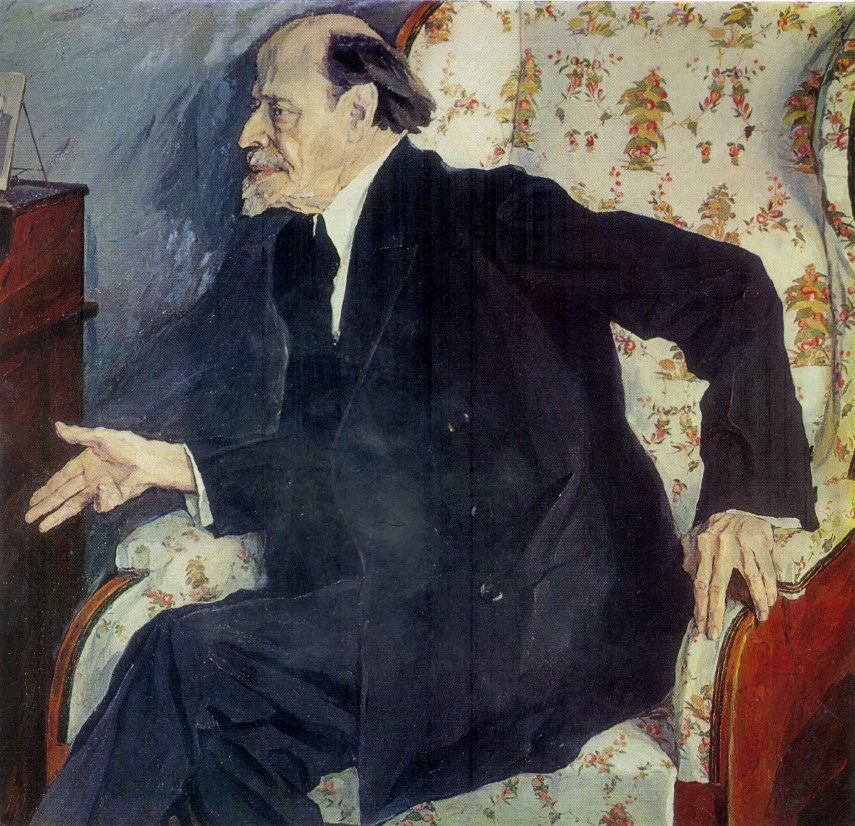 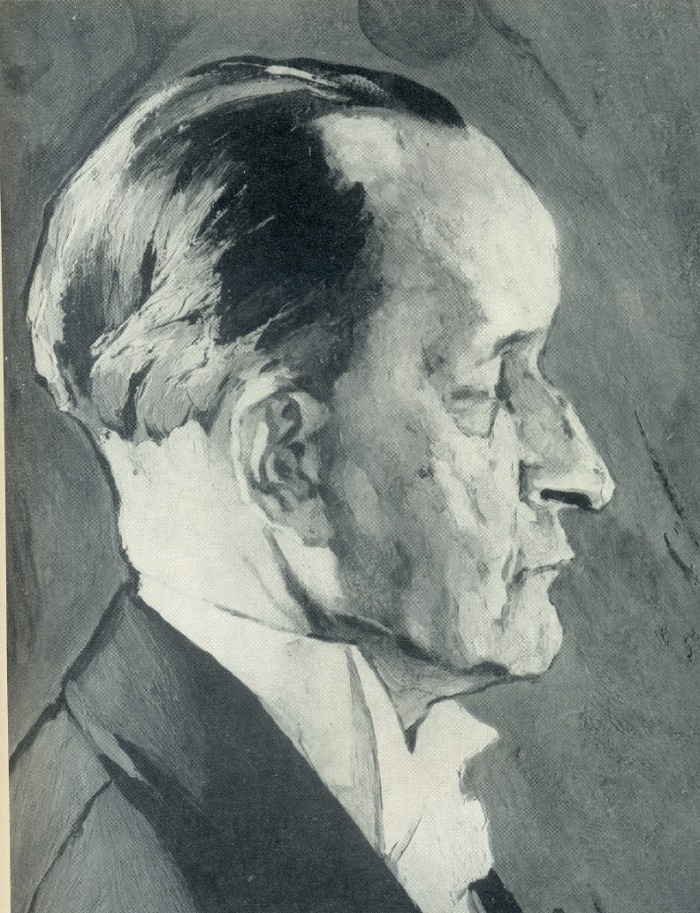 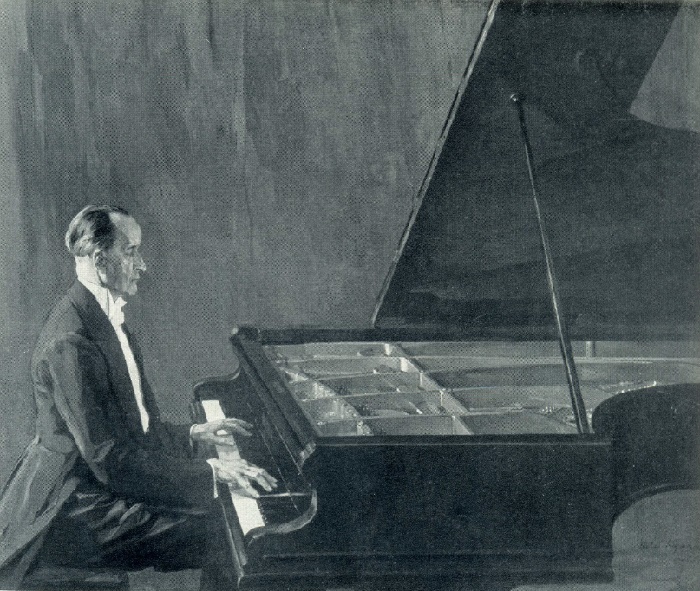 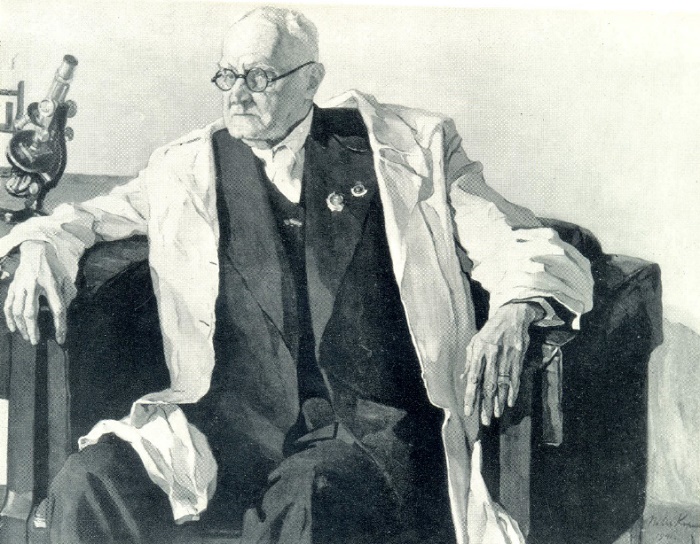 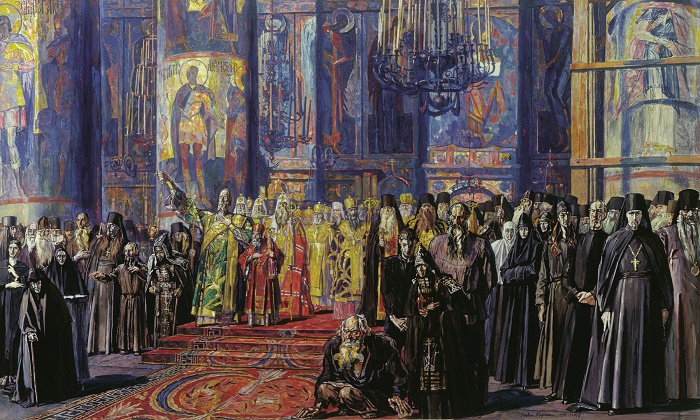 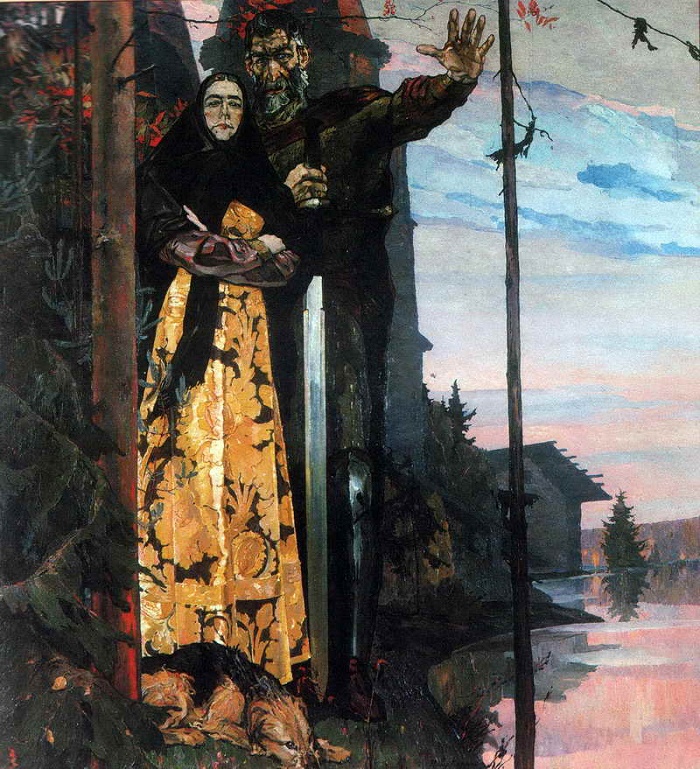 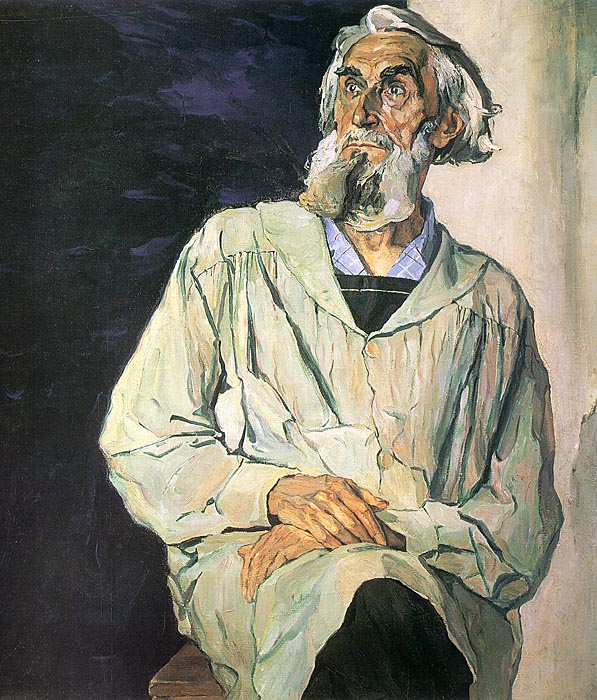 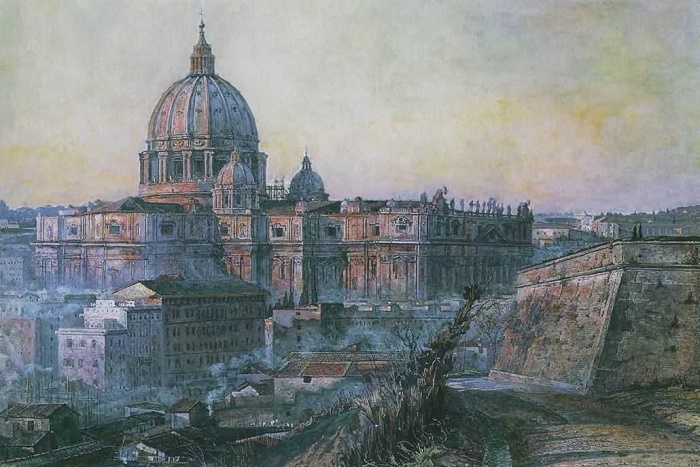 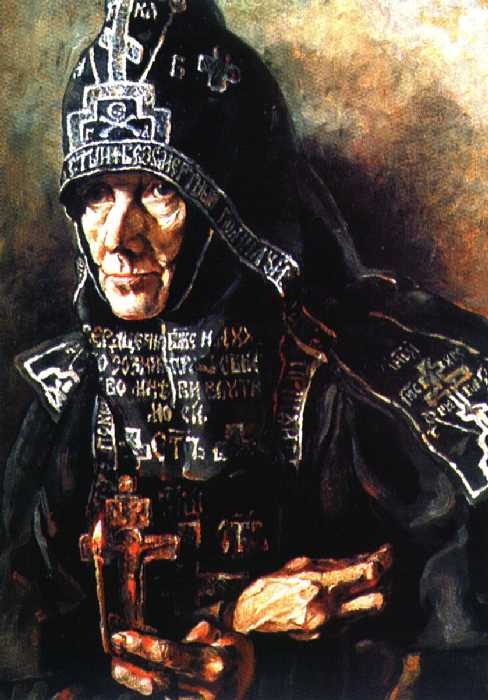 Szymonick from the Ivanovo Monastery. Etude to the painting ‘Requiem’. 1930’s