Soviet artist Dmitry Zhilinsky (1927-2015) focused his creativity on the eternal values ​​of the universe, nature, culture, moral and spiritual foundations of personality. Author of numerous innovative scene paintings, portraits, in which successfully reinterpreted the tradition of ancient Russian icon painting and early Renaissance painting. Dmitry Zhilinsky was the Academician of the Academy of Arts of the USSR (1988), Corresponding Member (1978), People’s Artist of the RSFSR (1987), the winner of the RSFSR State Prize of Ilya Repin (1985) and the State Prize of Russia (1999), Member of the Union of Artists of the USSR since 1954. 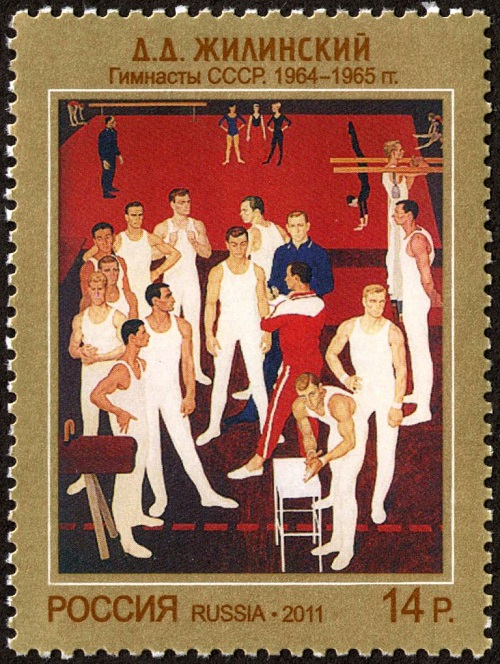 Zhilinsky was born 25 May 1927 in the village of Volkovka, Krasnodar, Black Sea Region of Russia, the USSR. In 1944-1946 he studied at the Moscow Institute of Applied and Decorative Arts. In 1951 he graduated from Moscow State Academic Art Institute named after VI Surikov.

Soviet artist Dmitry Zhilinsky died in Moscow on July 29, 2015. He was buried at the Troekurov cemetery.

When Dmitry Zhilinsky was young and lived in the south in the village of Apsheron, he wanted to visit the Tretyakov gallery and redraw all the pictures there. Only 18 year-old young man he was able to realize his dream. The war ended, Tretyakov returned from evacuation, and Dmitry Zhilinsky came to Moscow to study. Finally, he saw a great art, familiar from reproductions of masterpieces. But works in the gallery were a hundred times more! To redraw all the works the whole life was not enough. And then he had another dream – to learn to paint, worthy of the outstanding creations of the past. Perhaps, then, he had no idea how difficult this way of understanding the secrets of professional painting was. But he still showed his creativity. In the works of the Corresponding Member of Academy of Arts of the USSR D. Zhilinsky modernity originally united with the traditions of ancient Russian icon painting and early Italian Renaissance.

He was a persistent pupil. Endlessly he studied nature, he painted portraits, landscapes, thematic compositions and, while still a student, became an excellent draftsman. But only after more than a decade after the end of the Surikov Institute he painted “The family at the seaside”, which featured: yes, he has become a master! This success was due not only to his experience, but also to the development of new techniques – tempera painting on gesso. Tempera provided an opportunity to make some necessary artistic and plastic discovery for him. These abilities he demonstrated in the second of his famous paintings “Gymnasts of the USSR.”

In addition to the great teacher – classical art, Zhilinsky was directed by teachers in school, in college. Who of them influenced him most? The artist said in an interview: “From childhood I was attracted by the art of the perfect, well-probably it was promoted by books and reproductions of paintings that were in our house, and my grandmother was serious about painting. She, a close relative of Valentin Serov, taught drawing at school.

According to the artist, in those years, his favorite artists were Ilya Repin, Serov, and Aivazovsky. “Then to our place came a former student of the Academy of Arts, and he told the story of Alexander Ivanov. Ivanov struck me over the years and love for him stayed forever. I think that for Russian painting Ivanov has the same value as Pushkin for literature. From Ivanov thread stretched to the Italian art. But it is already in the years of study at the institute”.

“…Then I was lucky enough to live in a house with relatives, sculptor Igor Efimov and his wife, artist N. Ya. Simonovich-Efimova, next to such personalities as LA Kardashev and VA Favorsky. The atmosphere around was highly artistic. In determining my fate a great role played Vladimir Favorsky. Doing any thing, I consulted with him. In addition to professional advice, I got a lot of moral lessons. Once I invited Favorsky to see one of my training activities. He criticized my work. And I said: “Everything is clear, but this is only a draft …” – “Then do not call me”, – he said and left. For the artist there should not be “draft”. Each drawing must be perfect”.

The family of the artist Nikolai Mikhailovich Chernyshev. 1969. The State Russian Museum

Queen of Denmark Marrreta II. 1993. Collection of the Royal Family of Denmark, Copenhagen

Eternal memory to the artist. 1997