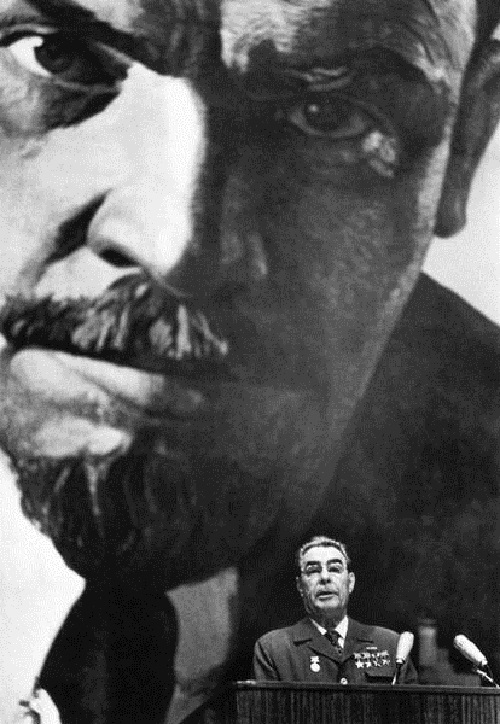 Not looking back. The two Ilyich, 1981. Soviet photographer Dmitry Baltermants

During the World War II, Soviet photographer Dmitry Baltermants (May 13 1912 – June 11, 1990) was a war correspondent of newspaper “Izvestiya” and army newspaper “To crush the enemy.” Dmitry Baltermants worked on different fronts with his camera. He was wounded twice. Since 1954 worked as a photo journalist at the most popular in the USSR weekly illustrated magazine “Ogonyok”. His photographs decorated walls of homes, like paintings. Dmitry Baltermants got the glory and recognition of such European patriarchs as Henri Cartier-Bresson and Marc Riboud, international exhibitions and membership in the World press photo jury. Dmitry Baltermants invented his own formula of socialist realism – a report plus staged photography. At this intersection there were no farmers in white shirts, but concentrated life. Baltermants is considered one of the pioneers of color, his business card – not red ties but wax Stalin in a coffin, surrounded by a rainbow of shamelessly alive colors. With his classic military photos, he gave the world not the pathos of military parades, but a series of “How it was” – faces of the prisoners, naked human pain, scattered on the ground corpses and stooped backs of alive. Soviet photographer Dmitry Baltermants created documentary evidence of the tragedy of the war. 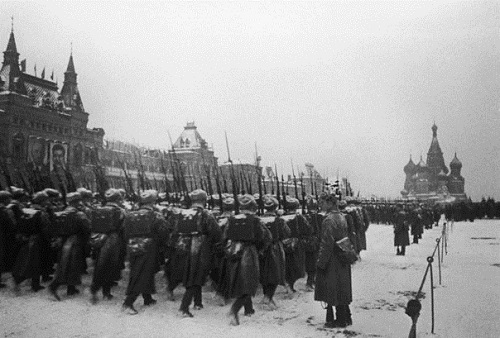 Dmitry Baltermants was born May 13, 1912 in Warsaw, in the family of the tsarists army officer Gregory Stolovitsky. When Dima was three years old, his parents divorced and his mother soon married a lawyer Nikolay Baltermants. His mother was fluent in several foreign languages.

After the beginning of World War I, in 1915 the family moved to Moscow. Two years later, in 1917, the revolution started in Russia, which brought the wealthy classes the deprivation and poverty. Almost immediately, after the Great October Revolution the family of Baltermants lived poorly in a communal apartment in Moscow, where Dmitry Baltermants had lived almost all his life.

Dmitry started his career at the age of fourteen, trying his hand in a variety of areas, but most of all he was attracted by the photo. For several years Dmitry assisted several famous photographers, helped arrange windows in the publishing house “Izvestia”, worked as a typesetter in a printing house, a projectionist, architect assistant.

After graduating from the Mechanics and Mathematics Faculty of Moscow State University in 1939, Dmitry Baltermants taught mathematics at the Higher Military Academy with the rank of captain. The same year he made his first professional photo essay. On the instructions of the newspaper “Izvestia”, he captures the input units of the Red Army on the territory of Western Ukraine. As a result, he was employed by “Izvestia” and became a professional photojournalist. According to his daughter Tatiana Baltermants, he readily gave up the prospects of scientific academic career: the soul was already poisoned by photo, all he had to do – to pick up the camera”.

With the onset of World War II Dmitry Baltermants went to the front as a photojournalist of the newspaper “Izvestia”. In the newspaper appeared reports of building antitank fortifications of Moscow, Defense, military action in the Crimea, the battle of Stalingrad.

January 4, 1943 he was severely wounded in the leg, but managed to avoid amputation. Due to injuries the rest of his life he was a little clubfoot. After lying in the hospitals until 1944, Dmitry Baltermants was again sent to the front as a military press photographer of the newspaper “To crush the enemy” (6th Army).

The chief editor of the newspaper “To crush the enemy” Lieutenant-Colonel I. Volkov submitted DN Baltermants to the Order of the Red Star 17 September 1944. Often the work of D. Baltermants was associated with risk, photographing took place in an atmosphere of fierce fighting, but nevertheless the task was carried out on time and in full.

During the fighting in the town of Breslau, May 16, 1945, Lieutenant Colonel Volkov again submitted lieutenant Baltermants to the award – the Order of the Patriotic War II degree.

After returning from the front, Dmitry Baltermants worked in the most popular in the USSR weekly magazine “Ogonyok”. In this magazine, he had worked since 1965 until his death.

During the Khrushchev “thaw” Dmitry Baltermants experienced the peak of his popularity. At that time, the Soviet amateurs were able to see many of the “archive”, unpublished at the time photographs, which captured also death, grief and the hardships of war. The photographer became famous abroad – personal exhibition of Dmitry Baltermants in London (1964) and New York (1965) made him an international celebrity. 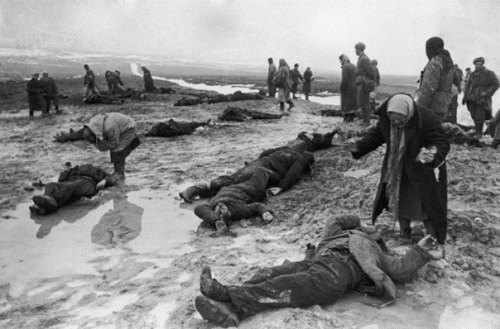 Photo from the series ‘How it was …’. Woe. 1942. Soviet photographer Dmitry Baltermants

Photo of the Great Patriotic War “Woe” was made by the Soviet press photographer Dmitry Baltermants in January 1942 in the Crimea, for which he received worldwide fame. The photograph shows the place of execution of civilians by the German occupiers: shaken by grief people go on the field searching for relatives among the corpses lying in the snow. During the first days of December 1941 several thousand (according to the German report – 2.5 thousand people, according to witnesses – 7 thousand) Jews living in Kerch, were shot by Sonderkommando 10b of Einsatzgruppe D in the anti-tank ditch at Bagerovo village. Then, on December 29 in the same anti-tank ditch due to the fact that Soviet reconnaissance killed a German officer, the occupants shot a few hundred villagers – Russian, Ukrainians, Crimean Tatars.

Soviet troops of the first echelon landing in Kerch area saw Bagerovsky moat December 30, 1941; In early January to this place came investigators and photojournalists. Among them were Soviet photographers Dmitry Baltermants and Evgeny Khaldey. 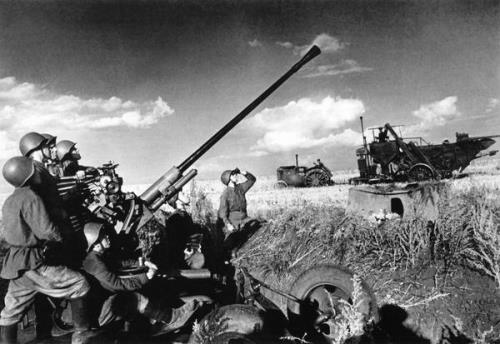 Guarding the skies of the Motherland (Attempt to harvest the first year of the war). 1941 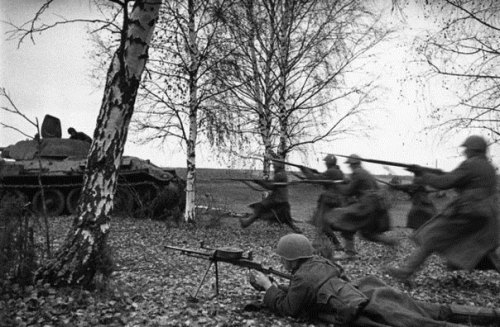 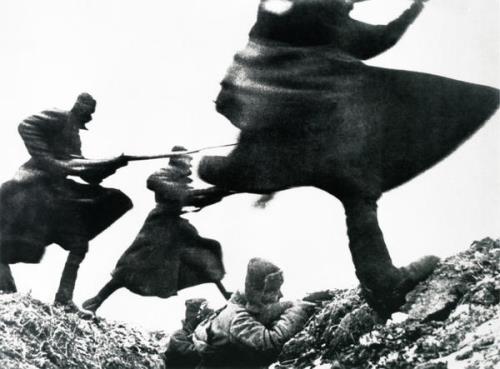 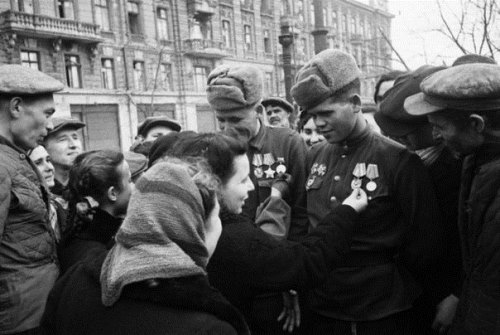 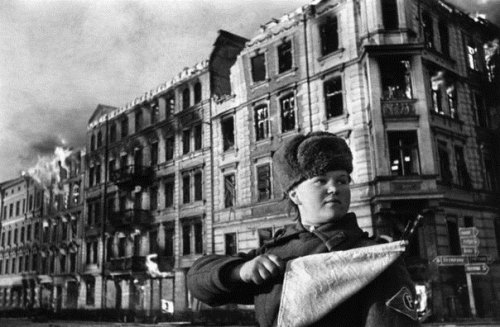 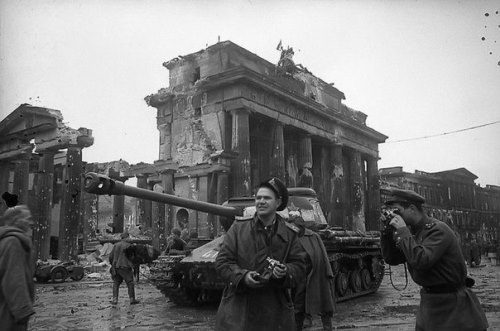 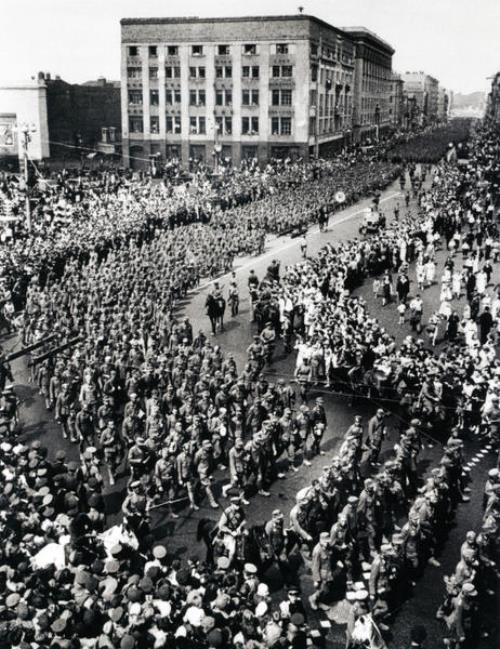 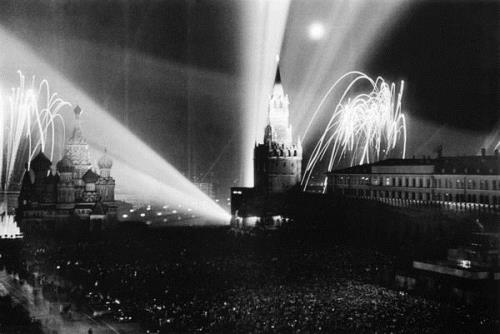 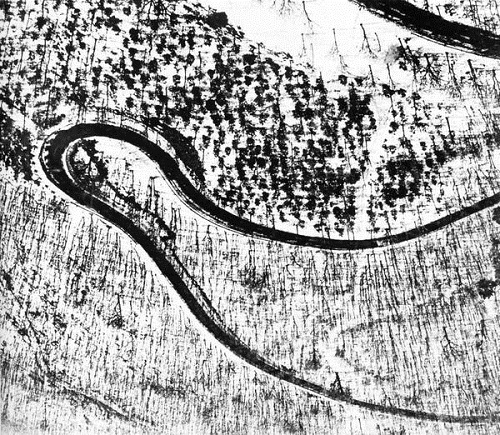 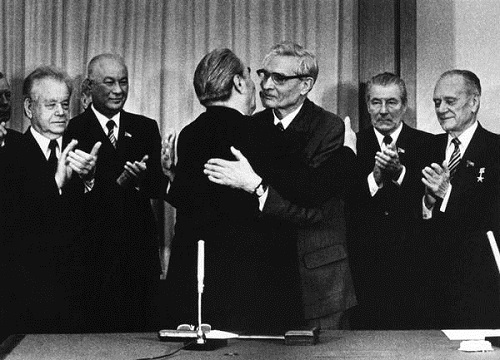 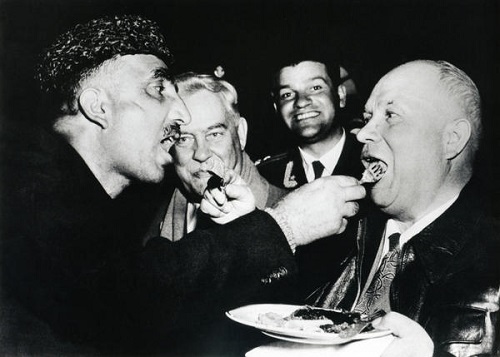 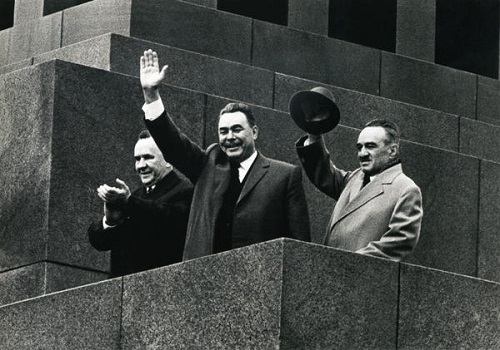 For the first time without Khrushchev (Alexei Kosygin, Leonid Brezhnev and Anastas Mikoyan at the Mausoleum). May 1, 1965 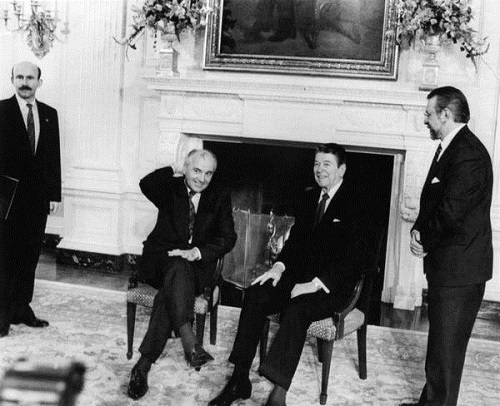 Meeting of Mikhail Gorbachev and Ronald Reagan. From the series ‘Six general secretaries’. 1987 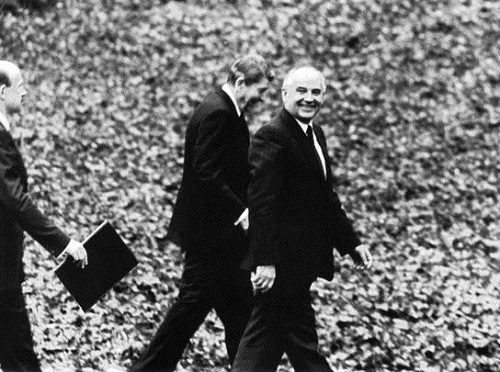 Ronald Reagan and Mikhail Gorbachev in the garden of the White House. December 1987 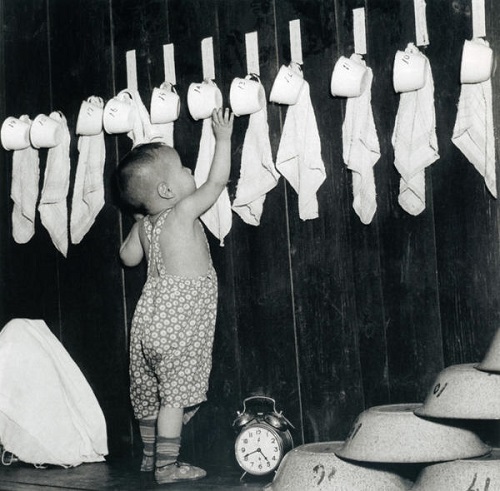 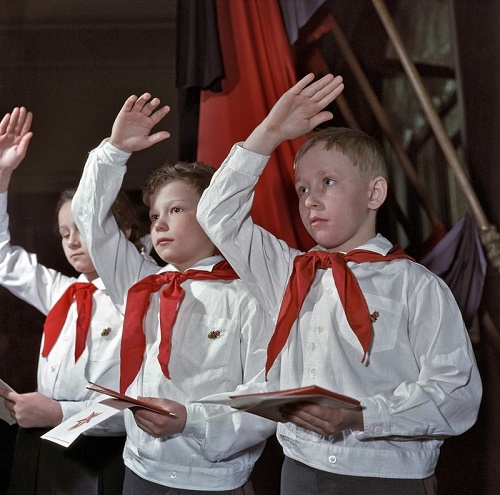 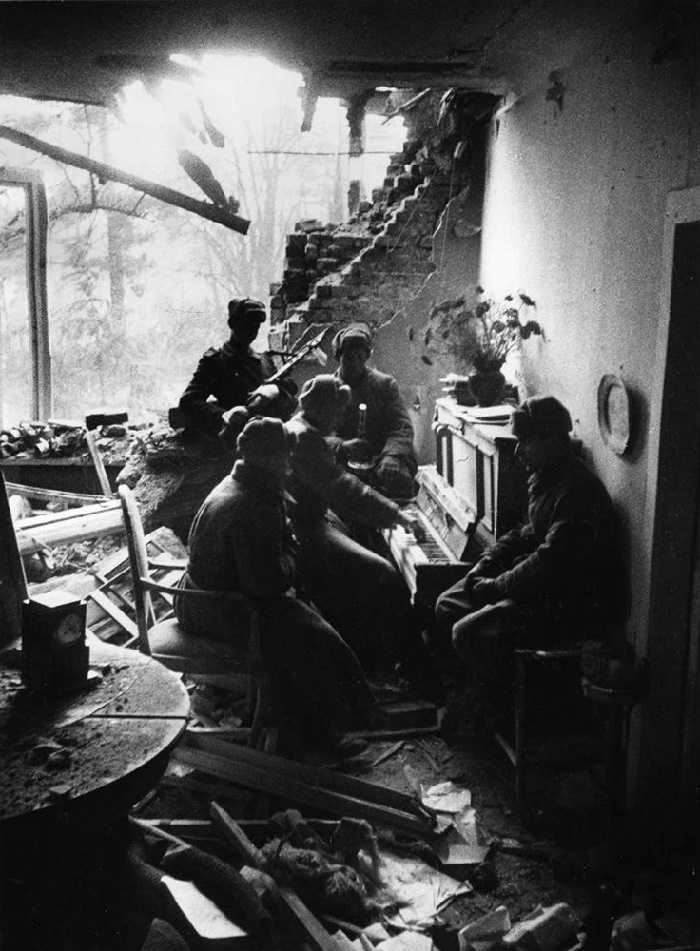