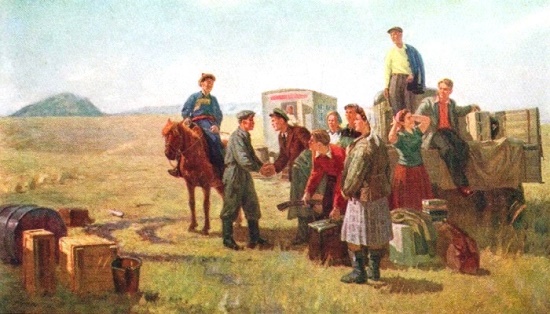 Modern, in particular in 1954, the theme of developing virgin and fallow lands could not but attract the thoughts and feelings of Soviet artists. To reflect in the realistic artistic images the beauty and greatness of the work of the Soviet patriots on virgin lands and to contribute to this victory was one of the important tasks of Soviet art.
Many artists showed a deep interest in a grandiose development on the virgin lands, which began on the call of the Communist Party in the spring of 1954 in Kazakhstan, Siberia, and the southern Urals. Artists who visited the virgin lands in the first days and months of its developing, plunged into the thick of a difficult life. They saw how, overcoming difficulties, the Soviet people turned huge spaces of untouched land into fertile fields.
Having lived side by side with tractor drivers, agronomists, geodesists, and workers of other professions who voluntarily gathered from different parts of the socialist homeland, the artists saw the heroic days of developing the virgin lands closely.
Some of these sketches and paintings were shown at the All-Union Art Exhibition in 1954 and at an exhibition in the Palace of Culture of the I.V. Stalin. The publishing house “Soviet Artist”, having selected a part of the works, published the album “Etudes, pictures from virgin land” – works by artists in the spring and summer of 1954. 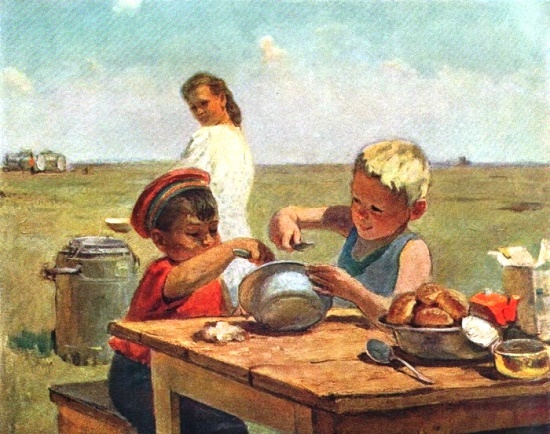 E.I. Samsonov. To the New Lands

I.I. Vitman. On the virgin land

Surveyors are having dinner. Altai region. Etude by N.N. Chebakov

The mechanic of the state farm Altai Zavozov. N.N. Chebakov

Etude by N.N. Zolotarev. Flowers in the tent. The Omsk Region

In the evening after work. Kazakhstan. R.N. Galitsky

For practice to the virgin lands. R.V. Slyotov

On the virgin land in Kazakhstan. V.F. Stozharov