Soviet artist Semyon Chuikov (1902 – 1980) – People’s Artist of the USSR (1963), the winner of two Stalin Prizes (1949, 1951), full member of the USSR Academy of Arts (1958), the founder of the modern Kyrgyz art. Semyon Afanasievich Chuikov was born 17 October 1902 in Bishkek, Kyrgyz Soviet Socialist Republic of the USSR. His father served as a military clerk. S. Chuikov began as a writer-essayist. In 1924 – 1930 he studied at the Higher Art (class of RR Falk). Later he worked as a teacher – including Proletarian Fine Arts Institute (formerly the Higher Art and Technical Institute, VHUTEIN) in Leningrad (1930-1932). He was one of the founders and chairman of the board of the Union of Artists of the Kirghiz SSR (1933-1937, 1941-1943). In 1934 on his initiative in Frunze (former Pishpek), the first in the country Art Gallery (now the Kirghiz Museum of Fine Arts) was opened. Soon Chuykov organized school-studio, which in 1939 received the status of the Art School, for these places it was the first of its kind. He lived mainly in Frunze, often visiting Moscow.

He worked in genre painting, landscapes, and portraiture, devoting his art to the people and the nature of Kyrgyzstan and India (triptych “On the common people of India,” 1957-1960). Already in the 1930s, he has demonstrated uncommon pictorial talent and subtle aesthetic rhythm, creating landscapes and portraits of bright local flavor.

Having given a considerable tribute to the standard of socialist realist mythology, he won fame in the first place, by his “the Kyrgyz kolkhoz suite” (1939-1948), for which he was awarded the Stalin Prize in 1949.

His “Daughter of the Soviet Kyrgyzstan” (1948) has turned almost into a poster about the triumph of socialism in Central Asia. The painting, in fact is a bright and fresh study of the rural schoolgirl on the background of distant mountains, whose figure impressively and clearly symbolizes Kyrgyzstan itself.

Over the years, his colorism, colorful modeling skills enriched even more. A special role is played by the impressions of two trips to India (1952, 1957). And in this case Chuikov most naturally expressed himself in simple pictures-motivated sketches, emotional and picturesque (“On the waterfront in Bombay in the evening”, “On the road”, both works of 1954, Tretyakov Gallery). He has published three books of travel essays and memoirs: Images of India (1956), the artist’s notes (1962), the Italian blog (1966). 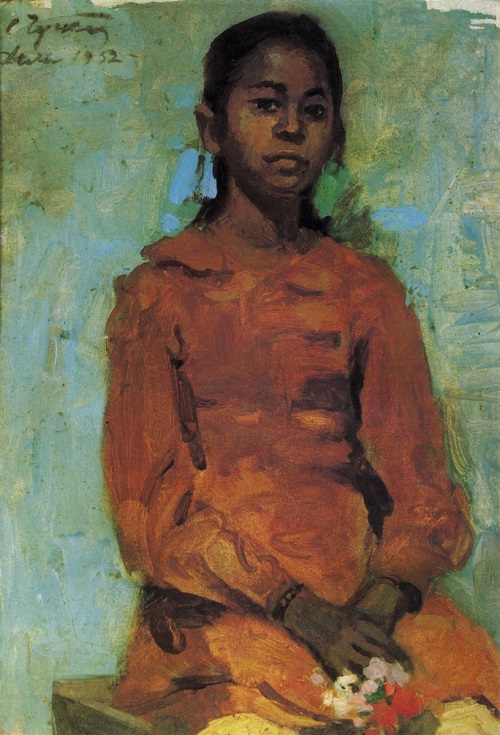 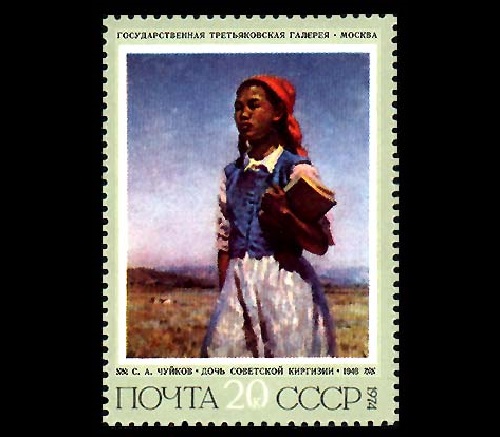 USSR Postage stamp of 1974 on painting ‘Daughter of Soviet Kirghizia’

Morning in old Bukhara. 1961. Oil on canvas on cardboard 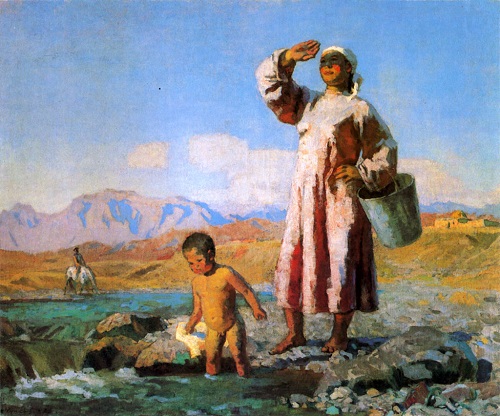 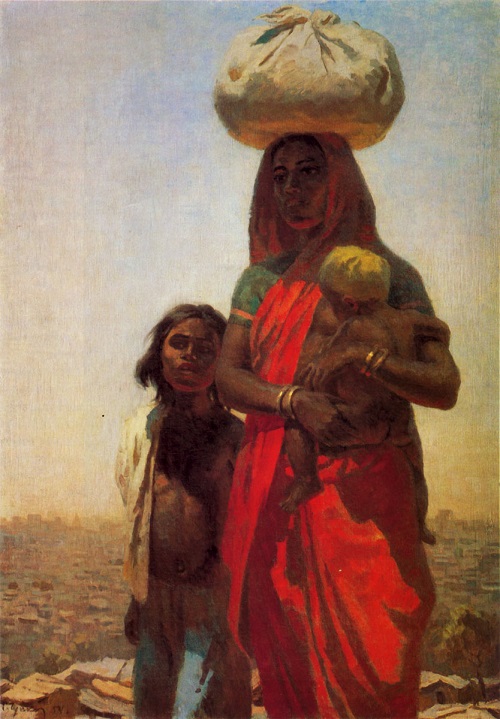 On the road. 1945. The State Tretyakov Gallery 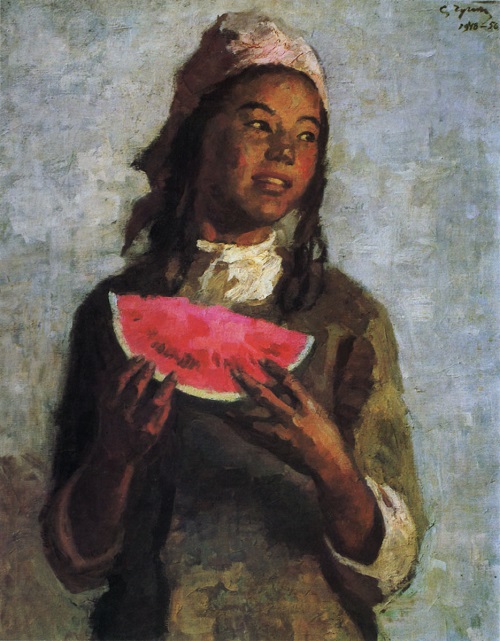 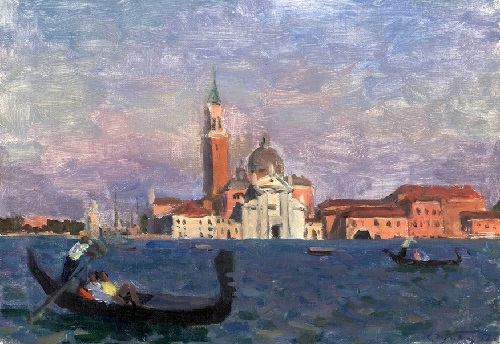 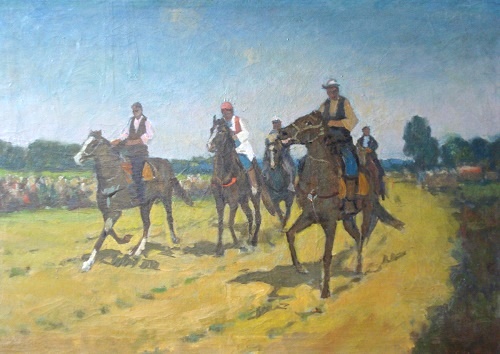 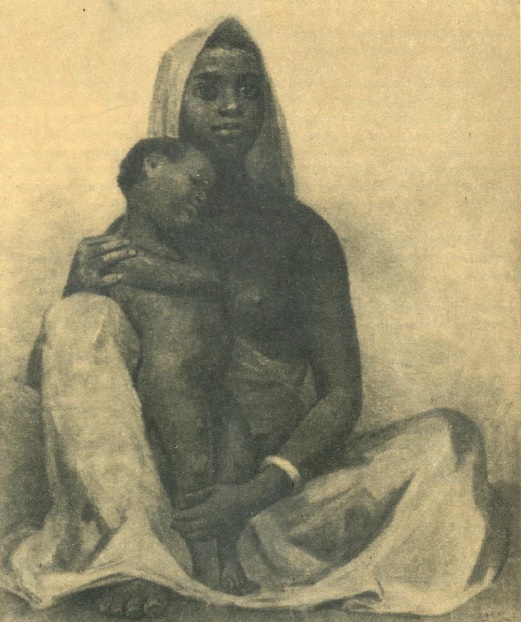 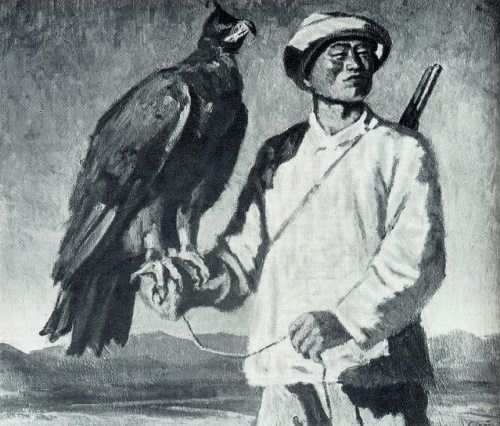 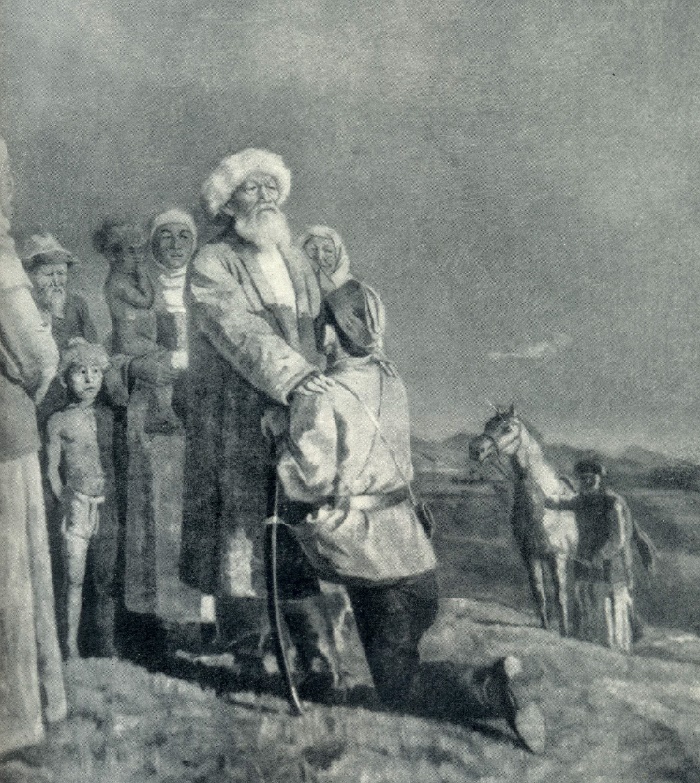 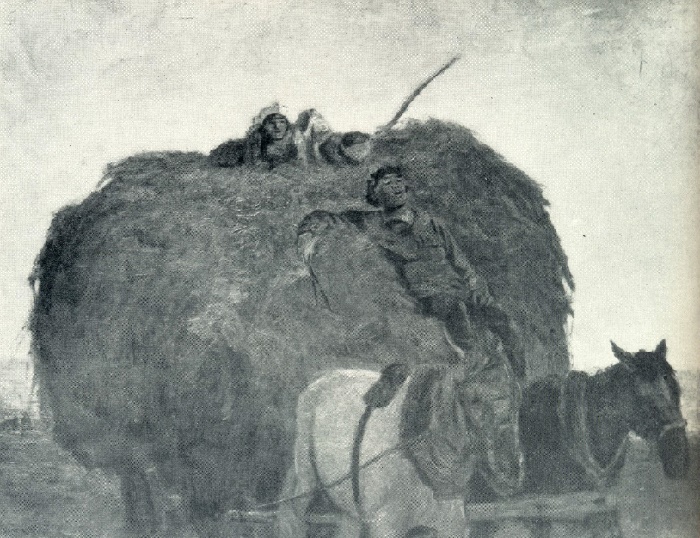 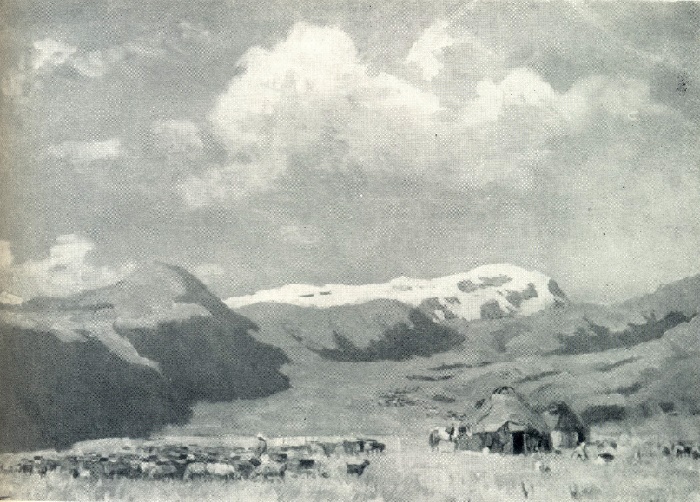 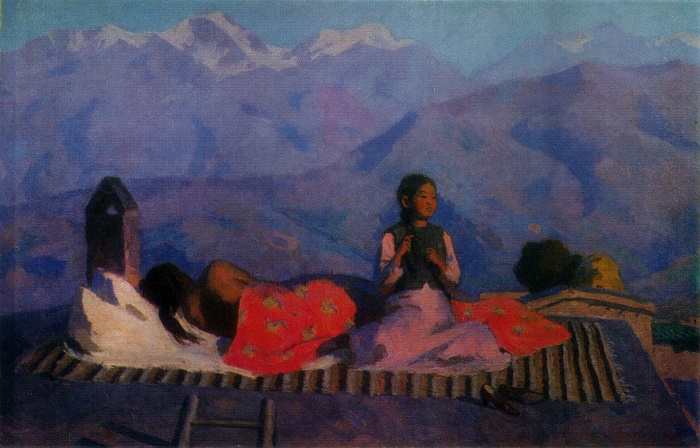 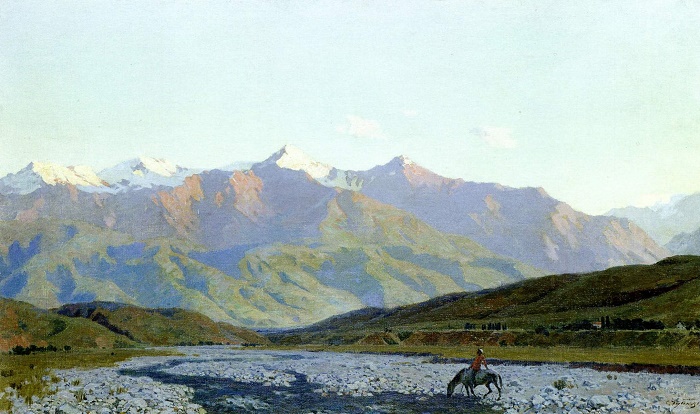 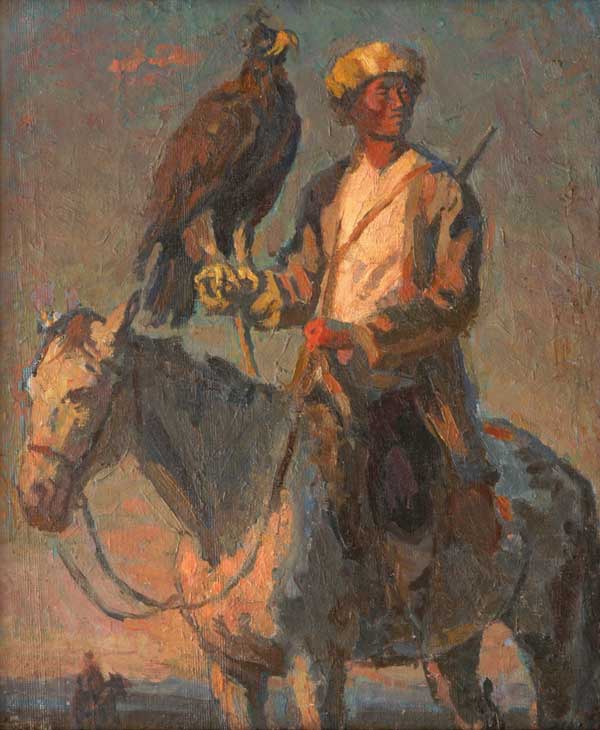 On the Elk Farm 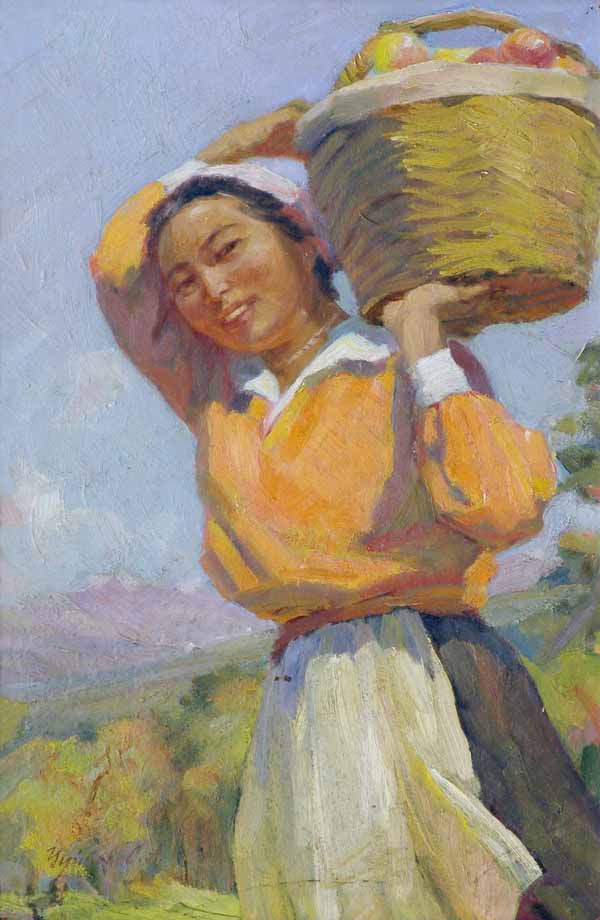 The daughter of Soviet Kirghizia. 1940s 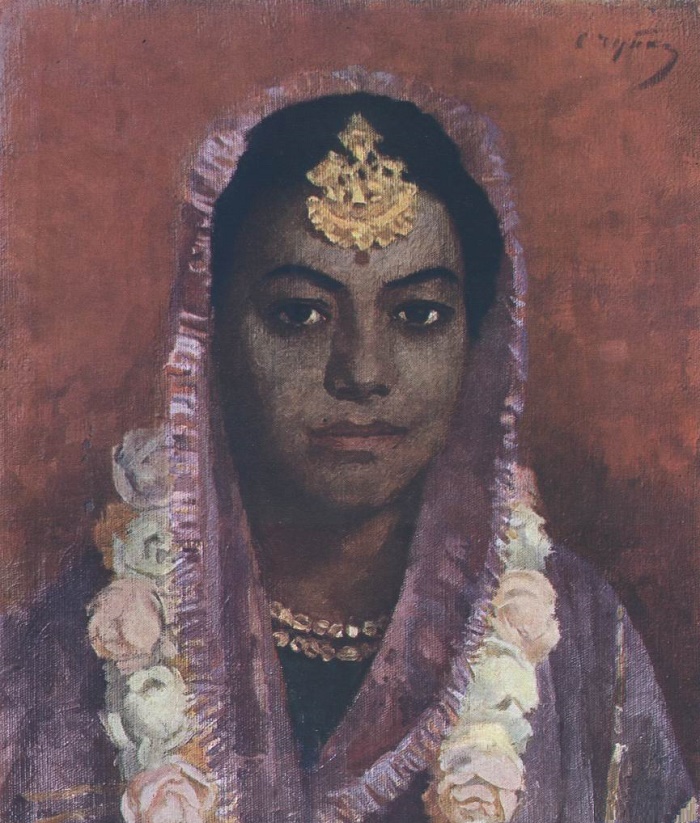