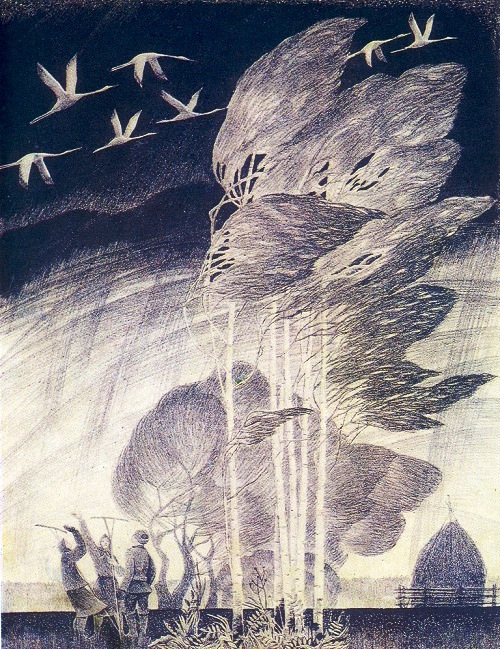 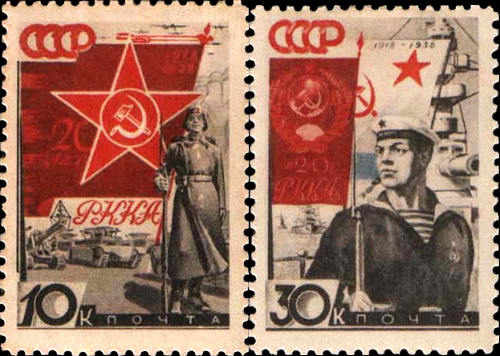 Soviet Russian painter, graphic artist Vasily Zavyalov (14 August 1906 – July 31, 1972) was one of the first creators of postage stamps of the USSR, Honored Artist of the RSFSR. He is the author of more than 600 postage stamps. “Lenin Mausoleum” – the first USSR Postage stamps by Vasily Zavyalov (1925). Vasily Zavyalov studied at the Art School at the Sytin printing-house, school engravers at “Goznak” factory, where he worked for many years. His first stamps with the image of the wooden mausoleum of Lenin were published in 1925 as part of the release, “The first anniversary of the death of Lenin.”
END_OF_DOCUMENT_TOKEN_TO_BE_REPLACED 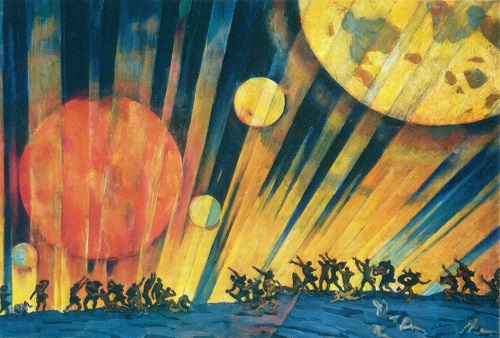 Soviet Revolution inspired artists to create outstanding works of painting and sculpture. They help us to understand better and feel stronger national character and greatness of the October Revolution. The dream of people of socialism, for which the October Revolution was accomplished, the artist Konstantin Yuon expressed in the painting “The new planet.” We see on the alarming dark sky cut with the bright rays of light, sunrise of a huge red planet symbolizing socialism. The inhabitants of the earth aspire to it, holding out their hands as if praying for happiness. Their way is not easy. Some died, others are in confusion, fear – this new world is not for them. But the majority of people welcome the birth of a new planet. This planet is red because the new society is born in a brutal fight, because the red – a symbol of the revolution.
END_OF_DOCUMENT_TOKEN_TO_BE_REPLACED 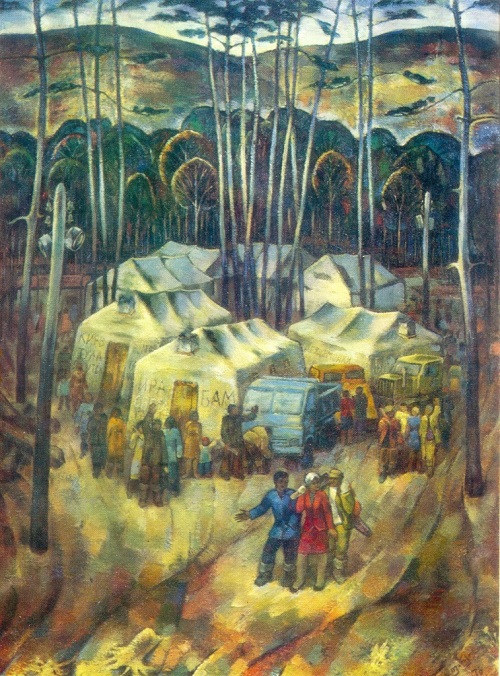 Soviet artists painting BAM – Baikal–Amur Mainline, Great Soviet construction – leading theme of Soviet art of the time. The new, fast rhythm of life experienced artists. On construction sites of the country they saw the unprecedented rise of enthusiasm with which the young boys and girls met the most amazing accomplishments. That brought joy to the creative mind of artists. Again, continuing the tradition of the masters of the older generation, the young artists were going to All-Union shock Komsomol constructions of the country to see their peers in work and life, truly recreate the images of the young builders. “For a young artist’s creative trips, trips to such places as BAM, was the beginning of everything, – said Vyacheslav Kubarev about his visit to Tynda – to see those characters sitting in the studio was impossible.
END_OF_DOCUMENT_TOKEN_TO_BE_REPLACED

Soviet artist Semyon Chuikov (1902 – 1980) – People’s Artist of the USSR (1963), the winner of two Stalin Prizes (1949, 1951), full member of the USSR Academy of Arts (1958), the founder of the modern Kyrgyz art. Semyon Afanasievich Chuikov was born 17 October 1902 in Bishkek, Kyrgyz Soviet Socialist Republic of the USSR. His father served as a military clerk. S. Chuikov began as a writer-essayist. In 1924 – 1930 he studied at the Higher Art (class of RR Falk). Later he worked as a teacher – including Proletarian Fine Arts Institute (formerly the Higher Art and Technical Institute, VHUTEIN) in Leningrad (1930-1932). He was one of the founders and chairman of the board of the Union of Artists of the Kirghiz SSR (1933-1937, 1941-1943). In 1934 on his initiative in Frunze (former Pishpek), the first in the country Art Gallery (now the Kirghiz Museum of Fine Arts) was opened. Soon Chuykov organized school-studio, which in 1939 received the status of the Art School, for these places it was the first of its kind. He lived mainly in Frunze, often visiting Moscow.
END_OF_DOCUMENT_TOKEN_TO_BE_REPLACED 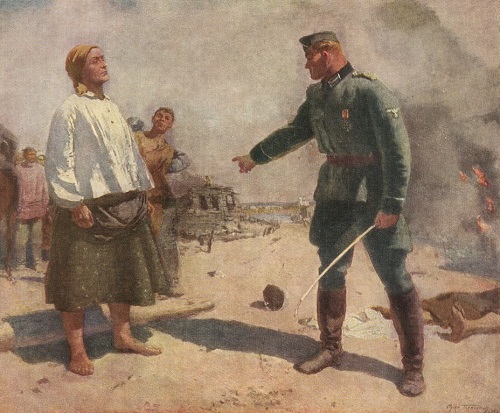 Soviet artists painting war 1941-1945
Early in morning of 22 June 1941 the Soviet people were shocked by the message of the treacherous attack of the fascist hordes on the USSR. On the second day of the war in the streets of Moscow appeared a poster by Kukryniksy “Mercilessly crush and destroy the enemy!”. Immediately after the war, the Soviet artists, together with all the people were ready to defend our homeland. Artists worked in different directions: they produced political posters, inspiring the Soviet people to the act of bravery.
END_OF_DOCUMENT_TOKEN_TO_BE_REPLACED 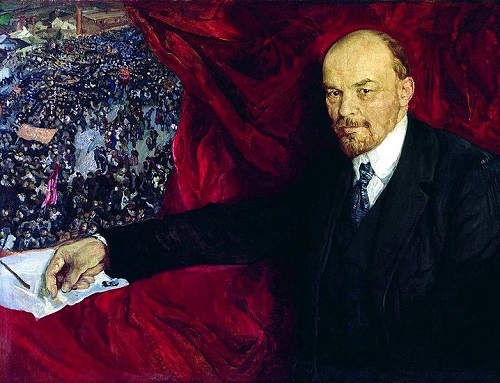 Leniniana – the name for works of art and literature, dedicated to Vladimir Ilyich Lenin. Anatoly Lunacharsky pointed out that Leniniana captured the image of the historical figure of world scale. On the creation of the image of Vladimir Ilyich Lenin worked many masters of the fine arts of the USSR. One of the first artists of this genre was Isaak Brodsky (1883-1939) – Soviet Russian painter and graphic artist, teacher and organizer of art education, Honored Artist of the RSFSR (1932), one of the main representatives of the realist movement in Soviet art of 1930-ies, the author of an extensive pictorial Leniniana. Starting from 1917 the image of Lenin entered into works of arts and crafts, especially in the works of the masters of the Union republics of the USSR.
END_OF_DOCUMENT_TOKEN_TO_BE_REPLACED