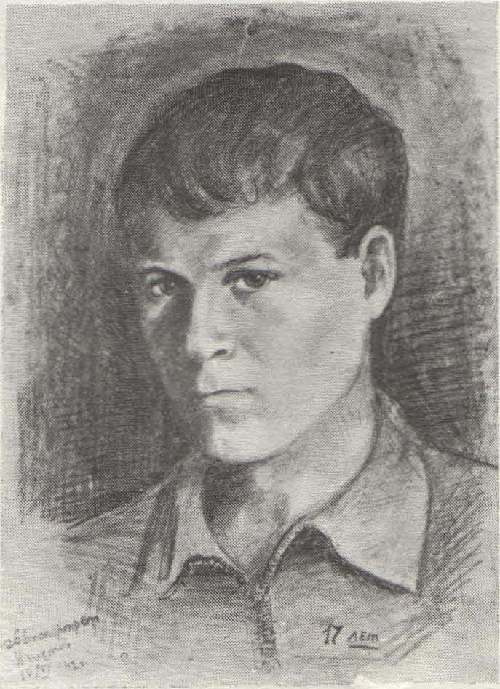 Talented but unknown artist Ivan Chistov, an orphan, who in the difficult time of war lived with some kind old lady, who loved him as her own grandson. She was proud of Vanya – a top student at school, and one of the first and most diligent students in the art studio. The head of the art studio Stanislav Kachinsky always set him as an example to others in the Studio. The boy perfectly sculpted from clay, even tried to make a sculpture out of found somewhere a piece of marble. Ivan was good at pencil drawing and oil painting. About love and devotion of Ivan to the art say the pages of his diary, which he started in January 1942. But the war went on, and instead of a pencil, brush and paints in the hands of an 18-year-old artist Ivan Chistov was now the gun – 16 August 1942 he left for the front. He became a hunter on German tanks. A year later, his grandmother got a short message – “Anti-tank rifleman Ivan Chistov was killed near the village of Shui of Ekimovichevsky district of Smolensk region, September 10, 1943”. He was 18. 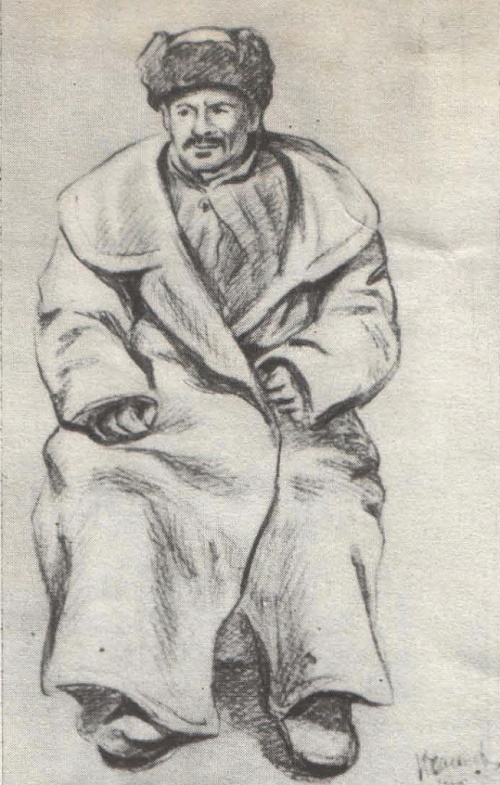 His friend Anatoly Tumbasov preserved Ivan’s letters from the front, and the old woman kept her adopted grandson’s diary. One of the Soviet journals published the material about Ivan, including two of his drawings. Here are some excerpts of his diary, describing days of the young artist in a difficult time of war. Diary begins somewhat unusual:

I, a young artist, take an oath and pledge to give to the art every free hour. I swear not to let go a pencil and paper in all conditions. Should learn a lot, to know the nature, study from the old masters – only this way I can become an artist.

January 8. In the morning listened to the radio news of Yasnaya Polyana. I curse the Germans for Tolstoy Museum. In the evening in the library read the book “The Artist Kuindzhi”.

January 23. I read a book about Michelangelo. Did homework.

In the evening came my friend, we talked about hard life, art and war. Perhaps soon we’ll have to leave, though we don’t go anywhere one without the other. From this damned war hurts the soul. Death to Hitler – suppressor of culture and cannibal! If not for the war, we would learn to draw and sculpt.

March 31. Strong wind is blowing, deep drifts everywhere, cold. I am drawing from the window watercolor landscape and still-life with herring.

5th of April. Still cold and strong wind. I draw from the window, read, do homework. We worked in an art club. Light is often extinguished. Electricity is expensive – war.

7 April. Finally, the sun, smelled the spring, came out to the yard – good! We went with a friend to the mine “Volodarka”, where there is always flock of magpies and crows, made sketches of the birds. We have watched the movie “The Return of Maxim” and “Shining Path” recently. These films chafe the soul and make you think more sharply about the war.

April 13. Today have not made a single sketch. I read about artist Vereshchagin. Received from Valentin, our friend, the letter, he is studying at a flight school. He was in the gallery and saw the paintings of Repin, Shishkin, Levitan. Oh, I wish I could see them once in my life!

April 19: Got notice about my brother … he is killed. He is the second after Danila …

23 April. We went to the woods to paint streams and larks. Birch forest seems smiling, white trunks reflected in the puddles. Set on a small island like hares.

June 5-6. With artist Nikolai Stanislavovich painted panels in the art studio and have been employed in the design of the park. I’d like to paint or sculpt. Some of our friends came from the hospital and told me in their company was an artist. He carried in his haversack a thick album and a lot of drawings. He drew the fighting and bombing, wounded, burned villages. I have to paint every day, at least ten to twenty minutes.

4 August. Spent a day on the medical committee, the doctor admitted that I am healthy and fit for field combat units. I went to the park to the anti-fascist meeting.

12th of August. As woke up, could not sit at home. I went to a friend, gave him a few sketches and drawings … I will not write my diary any more – drafted into the army. August 16 leaving for the front. 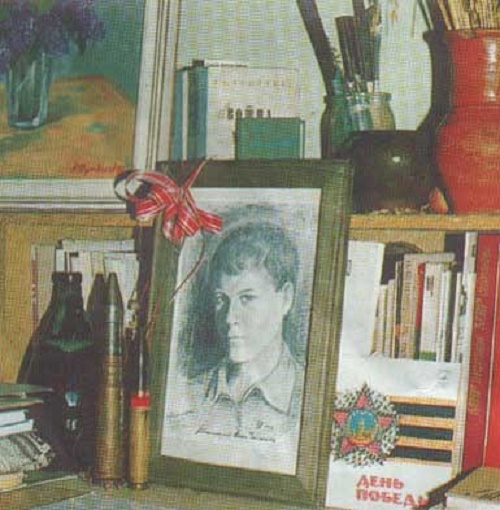 Ivan wrote to his friend from the front. Here is an excerpt of his letter:

“My friend, I miss you and can not forget for a moment my home and those happy days when we were drawing. While it is possible, draw day and night. And what a wonderful place here is, I would have escaped to paint, but can not. It is necessary to possess anti-tank rifle. And if you could see these beautiful sunsets! Golden birch trees, like in painting of Levitan. … Read and write to me, how my grandmother keeps my drawings and sculpture … ”

“Happy New Year, my friend. I am writing on January 1, 1943. At 10 o’clock we came to the area to inspect. General congratulated us on the New Year’s Day… After lunch there was an amateur concert of Red Army. I remembered how we welcomed New Year at home and our long walks. Remember: a quiet night, snowflakes, and we talked about art, about the future. Oh, how we lived!
Draw more, regret neither the strength nor the time, draw for two.
I shake your hand firmly, goodbye.
Your faithful friend,
Ivan Chistov”.

“… So, you’re in the army too. Now we will chase the enemy together. We’re going to the front. Meet the battered equipment. At one station we examined the German tanks, watched with what we deal with. Think we’ll cope. Good bye, my friend. Your Ivan”.

Soon Ivan’s grandmother got a short message – “Anti-tank rifleman Ivan Chistov was killed near the village of Shui of Ekimovichevsky district of Smolensk region, September 10, 1943”.

And what about his friend who also went to the front? Anatoly Tumbasov demobilized and returned home in 1946. At home he was met by his mother, but his father died at the Leningrad front. Did not come back from the war many of his friends, including Ivan Chistov. 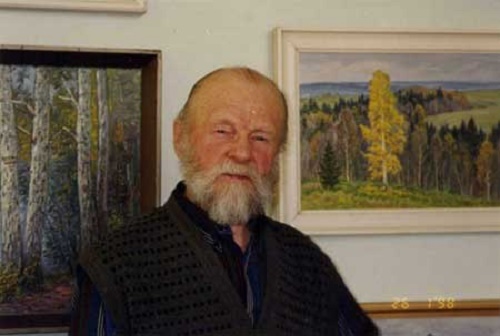 Anatoly Tumbasov (1925-2001) – Honored Artist of Russia, painter, graphic artist and journalist. He was born March 21, 1925 in the village of Kochkar of Chelyabinsk region. After the war, in 1951, Anatoly graduated from the Sverdlovsk Art College. He was a member of the Russian Union of Artists of the USSR since 1960, and since 1962 – the Union of Journalists. He courageously overcame the terrible years of the Great Patriotic War, successfully combining the work of the artist and aircraft mechanic.