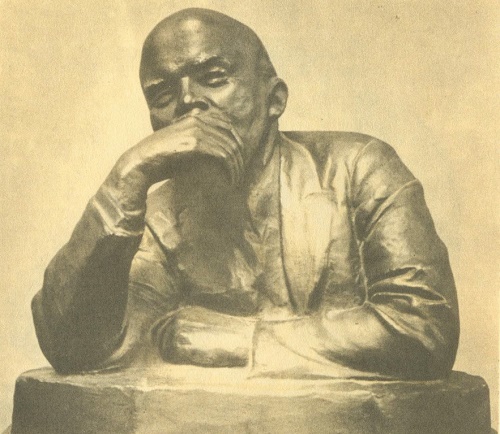 Leniniana by Soviet artist Nikolay Andreyev
The image of Vladimir Lenin has long attracted the attention of artists. Appeared a lot of portraits of the leader of the Great Proletarian revolution in painting, sculpture, drawings and engravings. Many of them are successful. However, the first place, without doubt, belongs to Soviet artist Nikolay Andreyev – pioneer of “Leniniana” (created around 100 sculptures and 200 graphic images of Lenin) … Gogol monument, Monument to Alexander Ostrovsky, Statue of Herzen and Ogarev in Moscow – all works of the sculptor NA Andreev (14 October 1873 — 24 December 1932). From the very first days of the Great Proletarian Revolution Andreev became irrevocably on its side. And the origin, and a large, serious mind and sharp observation helped him to properly understand and appreciate the significance of the October Revolution. Most of all his attention attracted the personality of the leader of the revolution. Artist persistently sought a meeting with Vladimir Ilyich, following him everywhere, where Lenin spoke publicly at rallies, meetings and congresses. 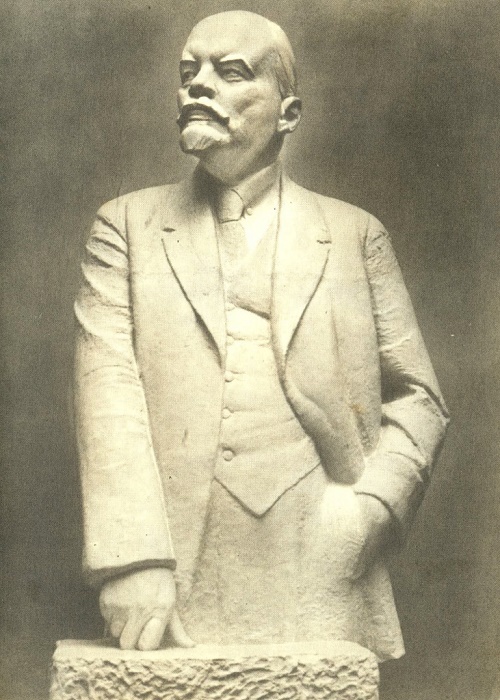 Nikolay Andreyev was born in 1873 in Moscow. As a child, he suffered great hardship. The family was large and poor. With great difficulty, thanks to the will and the talent Andreev punched his way to art, graduating from two Moscow Higher Art Schools. He soon stood in the front row of masters of Russian art.

In May 1920, NA Andreyev got access to Lenin’s office and was able to observe him in a business setting, and watch closely a lot. “No other artist – writes Andreyev – was not given such a long and close study of Vladimir Ilyich.” The artist continued his sketches. On these sketches he finished some of great portraits. Especially good was one of the – signed by Vladimir Ilyich.

Next to the sketches was the work of a sculptor. With a small piece of soft mastic Andreyev watched Ilyich at work, caught the plastic resemblance. That was hard. Vladimir Ilyich did not pose, absorbed in his great work. He was in constant motion! Many failures and rework for the artist were inevitable. They gave Andreyev the opportunity to present the latest Lenin figure in any position. From that time on grew the sculptural poem about Lenin, his Leniniana.

Then started long and creative work in the workshop. During the first five years Andreyev worked on the image of Lenin at work. There were some small sculptures of striking similarity. The most successful – in 1920 – depicts Lenin at his desk. The artist made a number of other options on the same topic. They are diverse, and each in its own way is very good. They can be seen in the Lenin Museum and the Tretyakov Gallery.

The second period in the development of his Leniniana began after Lenin’s death in 1924. The artist was commissioned sculptural portrait for the hall of People’s Commissars. He accepted the order, but insisted on complete freedom in time. He avoided haste. The new work took five years – until 1929. Close to Vladimir Ilyich people and those who knew him well helped the artist with advice.

During this time, there were dozens of products with varying degrees of completeness, amazing variety of designs. Thirty-seven variants of the sculptural portrait of Vladimir Lenin heads were discovered in the workshop of the artist after his death. Each with a special, unique expression.

Unfortunately, Andreyev’s Leniniana was interrupted by the death of the artist. But in this form it is – an unprecedented phenomenon in the world of art. Leniniana by Andreyev – a valuable contribution to the cause of communism by means of art.

Sketch from nature. 1920. Portrait of Lenin

Sketch, drawing of Lenin from nature. 1920

The first sketch from nature. Lenin. 1920

The second sketch from nature. Lenin. 1920

VI Lenin. The first half of the 1920s. Gypsum, covered with varnish. Leniniana by Soviet artist Nikolay Andreyev

sculptor Nikolay Andreyev. Gypsum, covered with varnish. The first half of the 1920s

Bronze bas-relief with a profile of Lenin. In 1969, under it placed an excerpt from the decree, which states that good places for recreation should be accessible to all

Bas-relief with a profile of Lenin. Kislovodsk, Russia

Model of the statue of N. L. Tarasov for his tombstone. Around 1911. Gypsum. Not saved

The tomb of KA Yasyuninsky. 1908. Granite, bronze. Moscow, Necropolis of the Donskoi Monastery

The tombstone of NL Tarasova. 1912

The gravestone of the patron of Nikolai Lazarevich Tarasov in the Armenian cemetery, 1911