The image of Stalin in the Soviet art 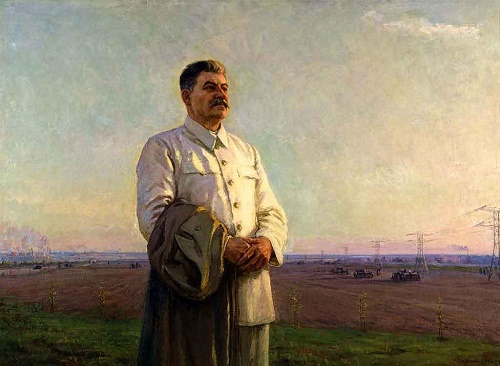 The image of Stalin in the Soviet art. Fyodor Shurpin. The morning of our country. 1946-1948. The State Tretyakov Gallery

To portray a leader – does not mean to see the leader. His life is shrouded in mythology. The image of Stalin in the Soviet art — it is a work of art, not documentary evidence. “There is no art for art’s sake, there can not be any “free”, independent of society, as if standing above this society artists … They just are not wanted. Yes, these people can not exist”. This is a quote from Stalin’s speech at the meeting with the creative intelligentsia in 1946. A topic worthy of a Soviet student of early 1950s – “The image of Stalin in the Soviet art.” Immediately comes to mind iconic painting “The morning of our homeland” by Fyodor Shurpin where peoples father stands on the background of the infinite blue sky and fields with dozens of random tractors. He – the conqueror of space. Moreover, its creator, tired with a greatcoat over his right hand after a good cause, similar to the Creator on the “sixth day”: “That was not bad.” 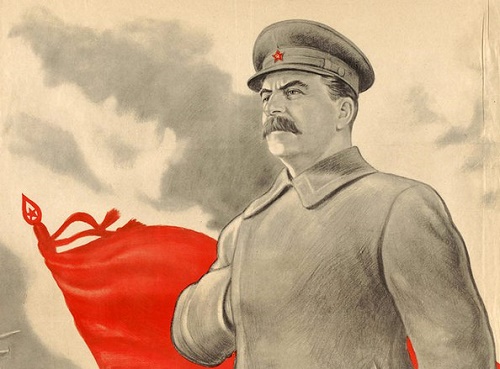 Stalin – the banner of our victories

The fact that the Stalinist iconography is sacral, demonstrates another example. In 1937, the Tretyakov Gallery opened an exhibition dedicated to the 20th anniversary of the Revolution. It is clear who was the protagonist. Original works by Soviet artists who participated in it were transferred to print photos sent to provincial museums, and at the same time with Moscow, exhibitions opened across Russia. But every typographical copy assured in Moscow, gave it the status of the original.

It is difficult to distinguish between a “hand” of Vasily Yefanov and “brush” of Alexandr Gerasimov. Recognizable, perhaps, are Dmitry Nalbandyan, Valery Barykin – pasty, bright, juicy. But there were also Pavel Sudakov, Vasily Svarog, Alexander Bubnov. Famous Isaac Brodsky and Fyodor Reshetnikov. But there were also forgotten masters who painted the leader. The same forgotten as the names of Russian icon painters, except Rublev and Dionysius.

The great Russian mystic-garde Pavel Filonov in 1936 painted a portrait of Stalin, apparently – a realistic, but full of internal energy. One can say about the character: “He – holy radiance comes from him.” Filonov, using his method of “analytical art”, painted in lifelike manner the internal image of Stalin titanium, Stalin hero. But Filonov remained an outcast from the social realism.

George Rublev, quite orthodox Communist muralist, painted “Stalin in a chair” in the spirit of his favorite Matisse. The artist was accused of formalism.

The image of Stalin in the Soviet art 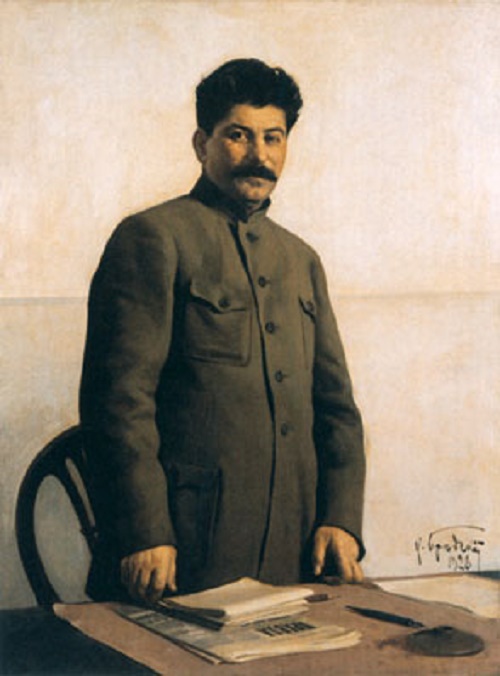 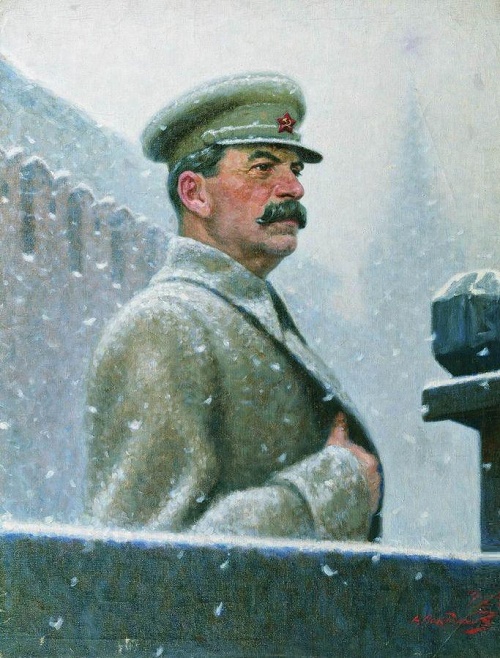 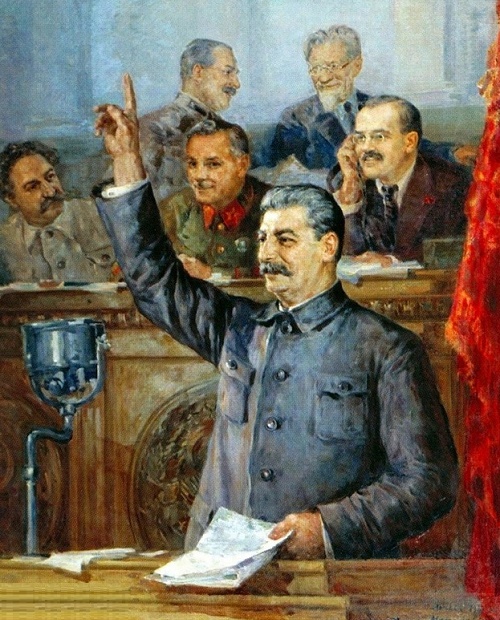 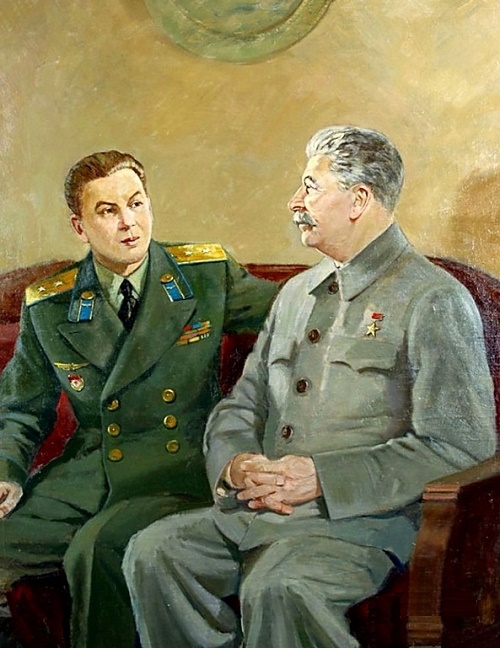 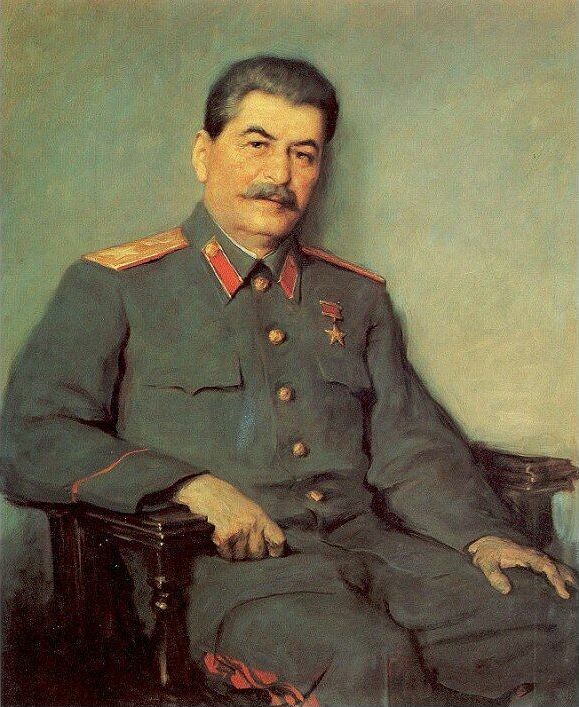 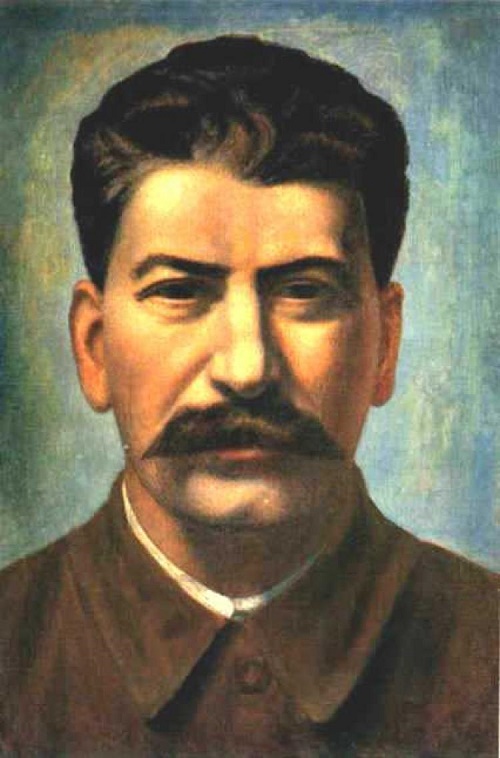 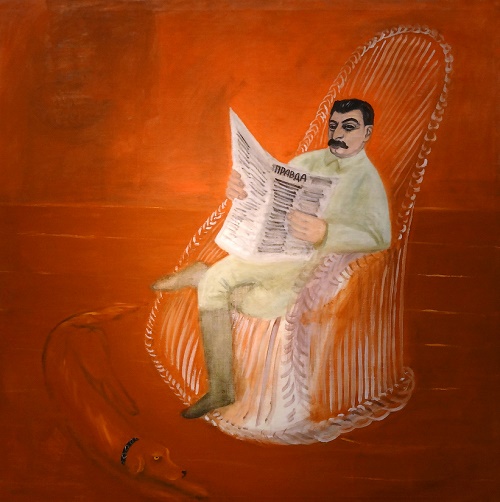 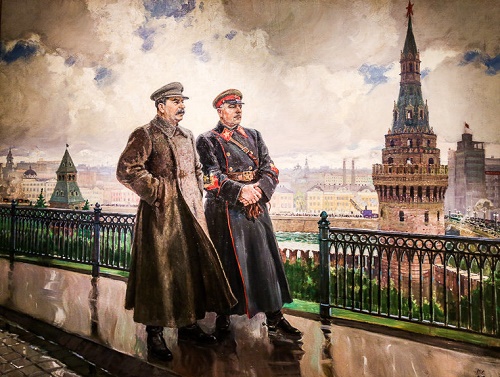 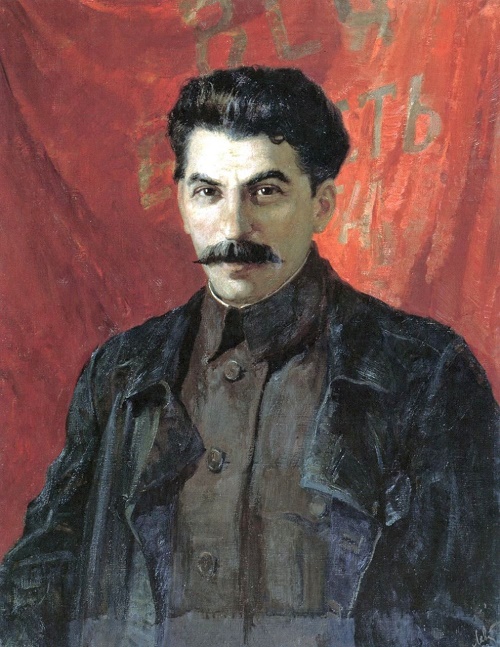 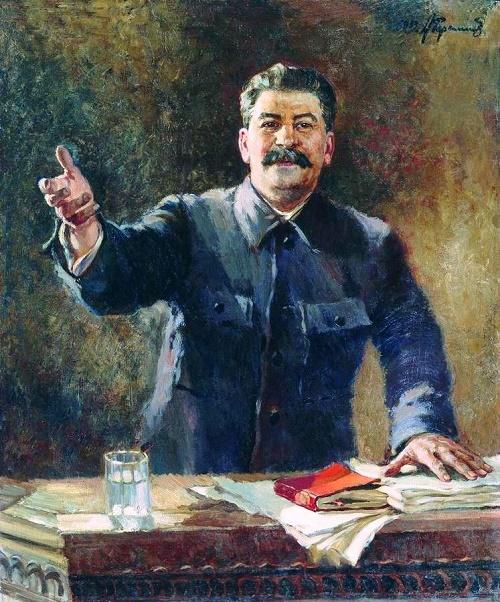 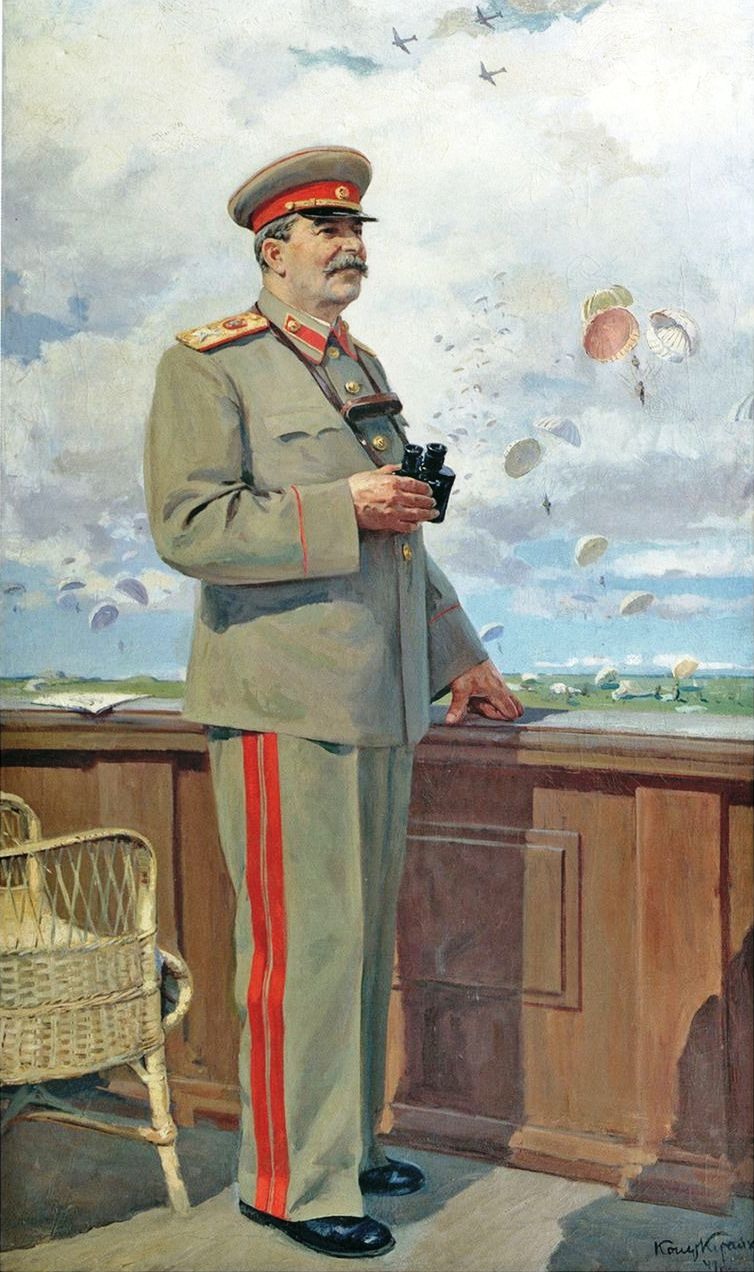 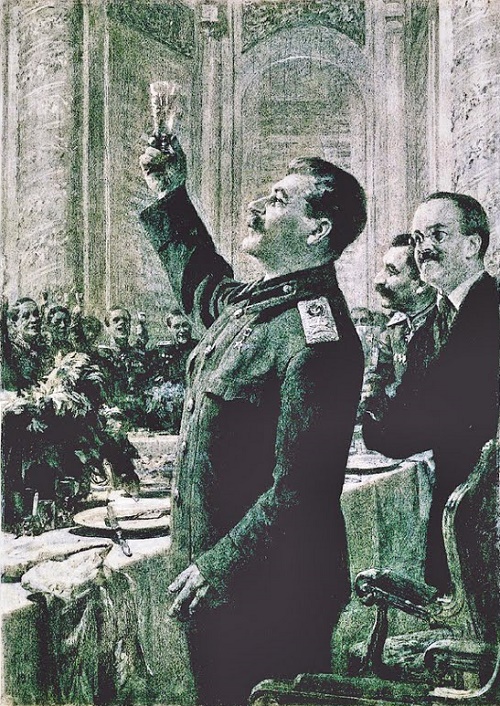 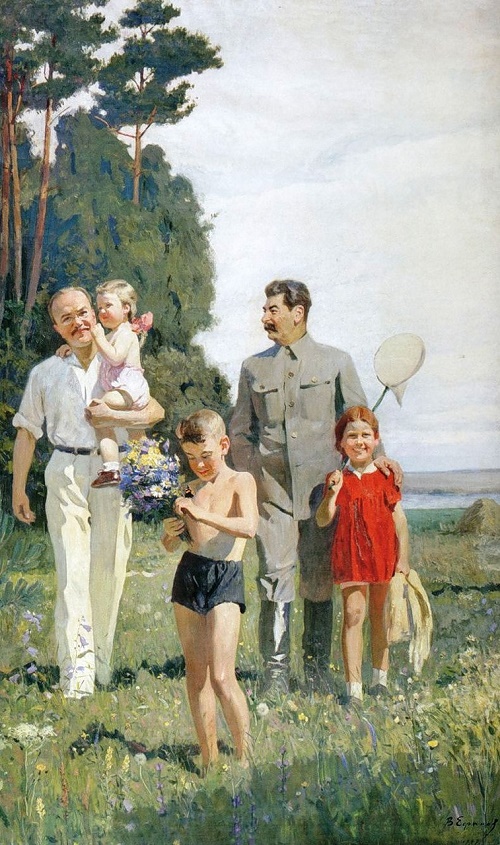 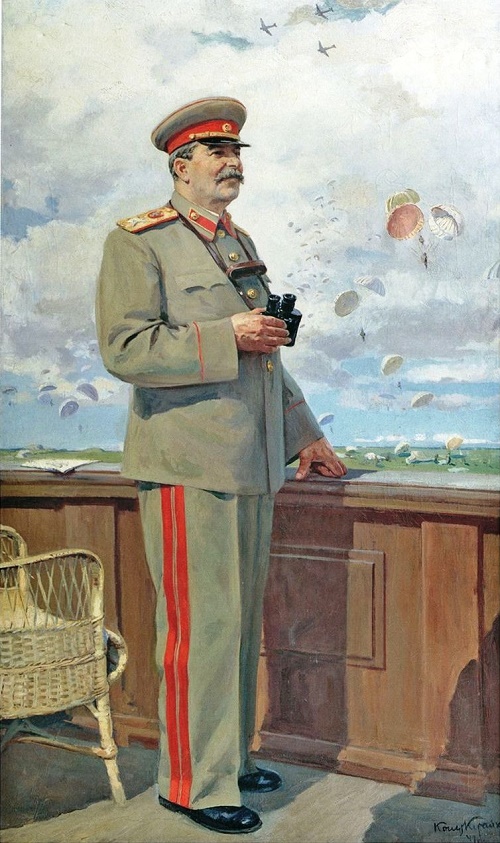 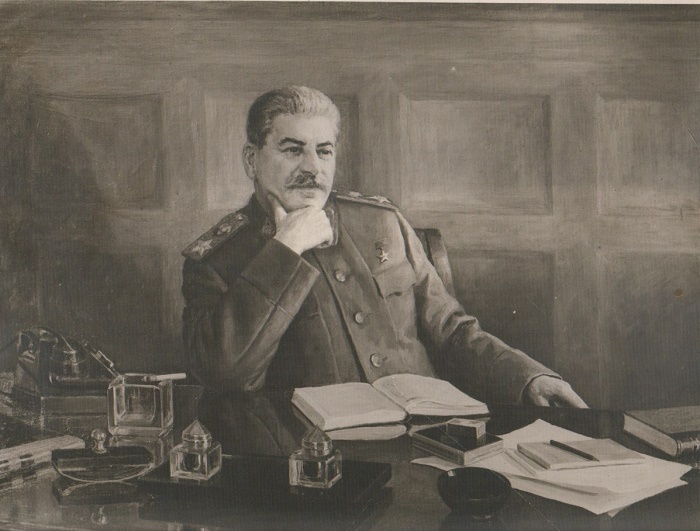 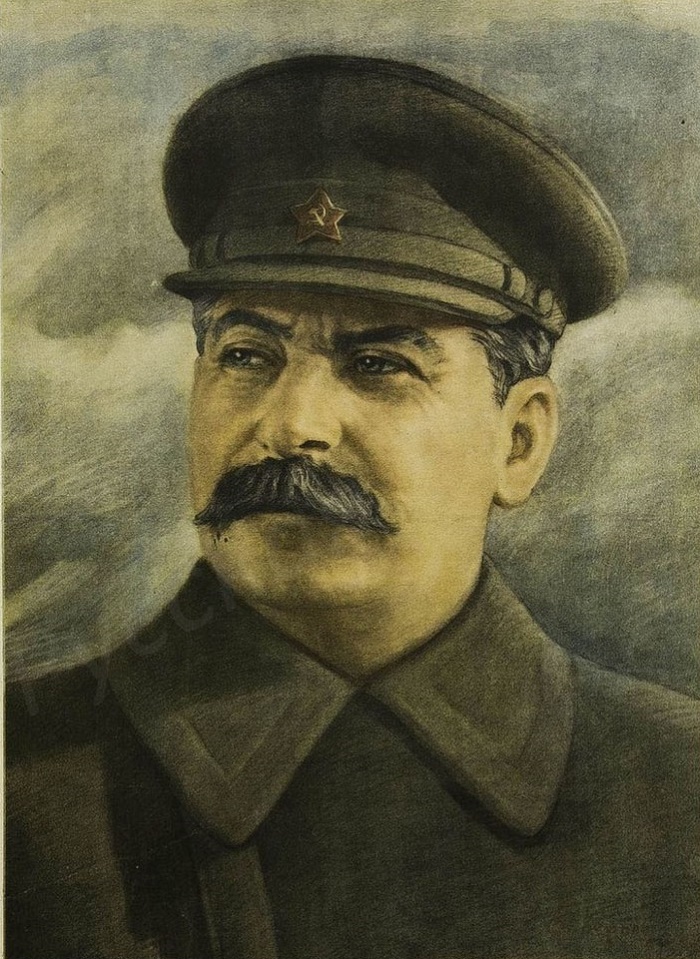 Chairman of the State Defense Committee and People’s Commissar of Defense of the USSR Comrade I.V.Stalin, 1942 (poster) by Boris Karpov (1896-1968) 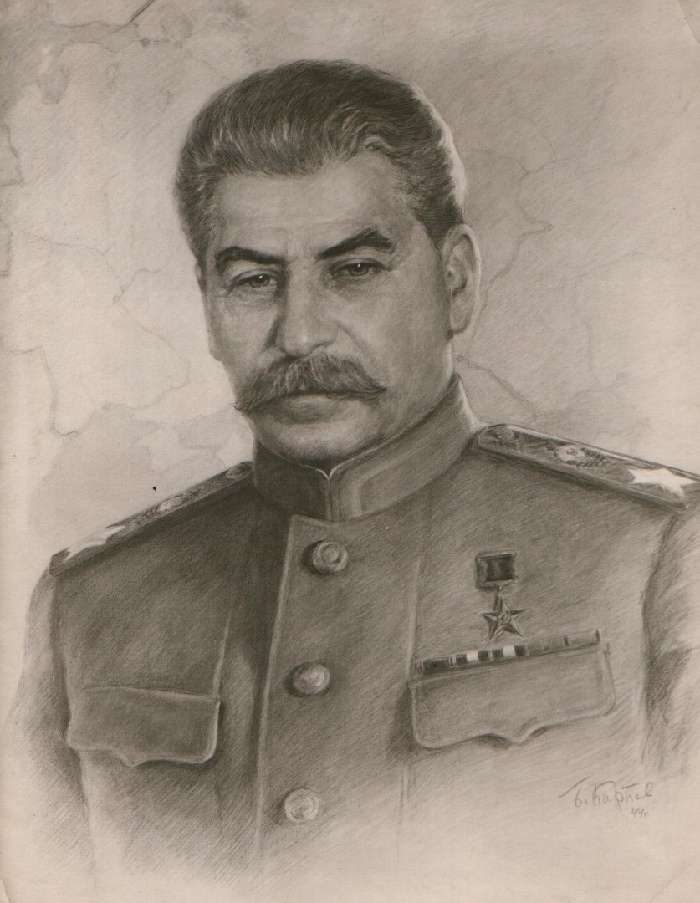 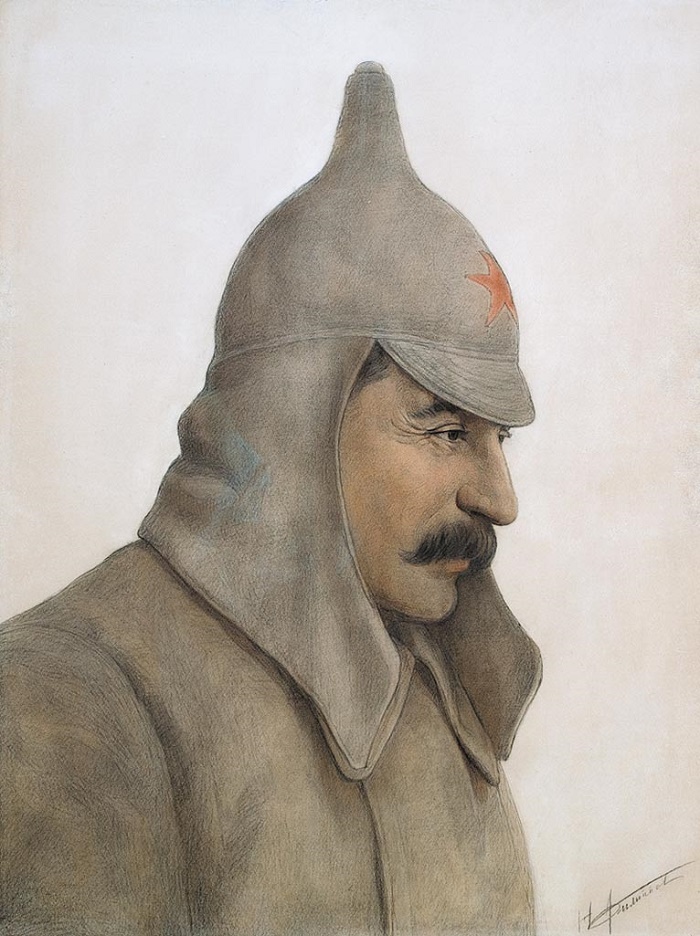