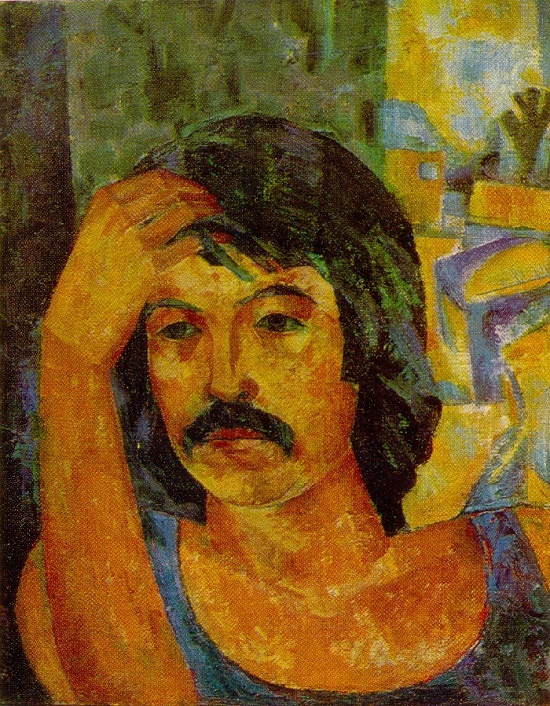 Soviet Uzbek artist Zhavlon Umarbekov
Rapidly and swiftly, Zhavlon Umarbekov joined the collective of artists of Uzbekistan. The versatility of interests, energy, creative efficiency, and purposefulness of actions, even appearance and manner of behavior, emphasized his belonging to the generation of artists who came to Soviet art at the turn of the 1960s and 1970s. This time is significant not only for the general attention to creative youth, but for the search for new stylistics in art, for new means of expression that evolve towards the classical completeness of images, and objectivity of form. Along with this, there continues a keen interest in the issues of the correlation of national traditions and modernity. In Central Asia, this process was particularly noticeable in connection with the discoveries of Soviet archaeologists who presented the world with the monumental art of Varakhshi, Afrasiab, Pyanjikent with their unique world of poetry, features of color and plastic solutions.
Umarbekov was one of those who caught this process in art, he realized the need for more complex, emotional-figurative disclosure of the phenomena of destiny. 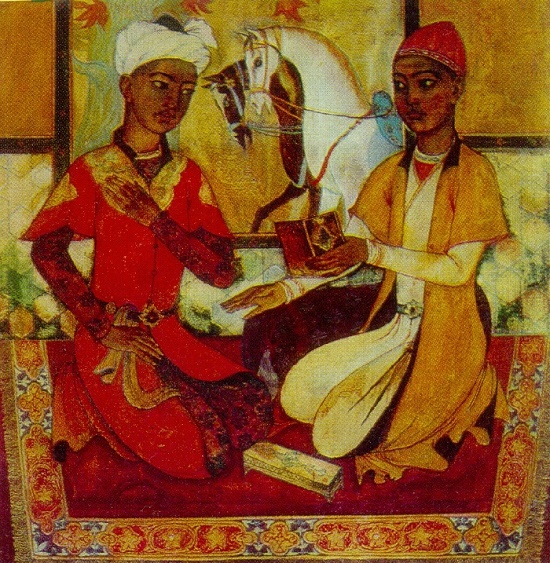 Born in 1946 in Tashkent, in a large family of a shoemaker. His brothers acquired working professions. Nobody, except for a good grandfather, did not pay attention to the boy who persistently drew something, loved music, and preferred any craft necessary for home to violent boyish games. The only source that excited his imagination was the children’s room in the house, the ceiling and walls of which were painted by some unknown master. The intricate ligature of the ornament, its complex colorful interweaving every evening seemed to lead the boy along the roads of his dreams.

In 1961, Umarbekov entered the Republican Art College of PP Benkov. Then, until 1972 he studied in Moscow, at All Union Institute of Cinematography, where he received a diploma as an artist-director of animated films. The Institute met the youth with a stunning stream of impressions, a variety of new and unfamiliar. It was very hard to study, but exciting. Every day he faced, it would seem, unsolvable tasks. However, an unusual memory, a sharp and precise eye helped. His teachers were prominent Soviet artists – Boris Nemensky, Yuri Pimenov, I.P. Ivanov-Vano. They carefully helped Zhavlon to improve, noticing the student’s rare sensitivity, his curiosity and talent. They saw that Umarbekov did not only remembers the artistic style of this or that master, but he knows how and from what to compose his picturesque concept. Having understood, he tries to apply it.

The creative path of the painter began in his student years. At the fifth year of the school, he created a genre painting “Harvest”, filled with the sun, the vibrancy of the colors of the golden autumn. Untypical in composition, it immediately attracted attention with a full-sounding sense of joy of being and was exhibited at the republican exhibition. The first, still student works of Marbekov often appeared at republican art exhibitions, the press wrote about them, peers and critics argued. The works showed not only the unconditional coloristic talent of the young painter.

Now that Umarbekov has become the author of many famous paintings, his creative laboratory is still in the process of recognizing, accumulating, comprehending not only life’s impressions, but also the experience of the world artistic culture. He is surprisingly unexpectedly different, and it is almost impossible to predict his interests. But he is always on the road, always in search, always at work, and this is a guarantee of his success. The son of his people, Umarbekov delves into his interests, vividly responds to all the major events taking place in Uzbekistan.

Thus, in 1968, when the republic was preparing to celebrate the 525th anniversary of the classic of Uzbek literature, Alisher Navoi, Umarbekov created two works: “Alisher of Navoi and Hussein Baikar in their youth” and “Song”. The appeal to these topics is not accidental. It was the desire to comprehend the complexity and depth of the ancient culture of people, to study the traditions of fine arts, to try to translate them into his creativity.

Zhavlon received a lot from the friendship with the famous Soviet monumentalist, People’s Artist of the Uzbek SSR Chingiz Akhmarov. He plunged into the world of the images of the Ancient East, understood the elegance of plastics and the unusual color of the book miniature. It was Ch. Akhmarov who suggested to Zhavlon the theme of his work “Alisher Navoi and Hussein Baikar in his youth”. Umarbekov did not set himself the task of conveying the philosophical depth of A. Navoi’s poetry. He depicted the everyday scene of a meeting of two great men of antiquity. Decorative color saturation, ringing red and golden tones determine the coloring of the painting.

The second picture, “Song”, is more poetic and inspired by the lyrics of Navoi: its dynamics and decorative color, the refinement of the lines cause musical associations. But in the “Song” for all its color harmony, too deliberate stylization hinders the holistic perception of the canvas.

Umarbekov is a good draftsman. His drawings devoted to ancient Asian cities show an understanding of the plastic patterns of eastern architecture. The circle of Umarbekov’s creative interests is very diverse. In particular, he creates linocuts, then minted for metal, draws a felt-tip pen or works on a lithographic stone, then together with Ch. Akhmarov performs monumental murals. But whatever the artist created, his interest is to a person and the affairs of his people. Modernity, its complex problems takes the imagination of Umarbekov. In his studio there are many canvases, new ideas that confirm that the artist crystallizes his theme, his own imaginative structure and his individual manner.

In the year of the 60th anniversary of the Great October Revolution, the young artist was awarded the title of laureate of the Lenin Komsomol Prize. 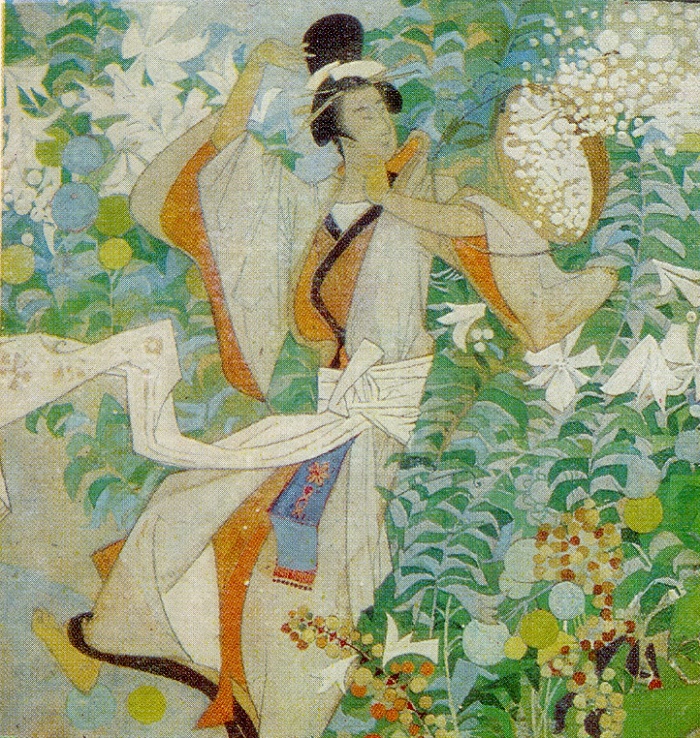 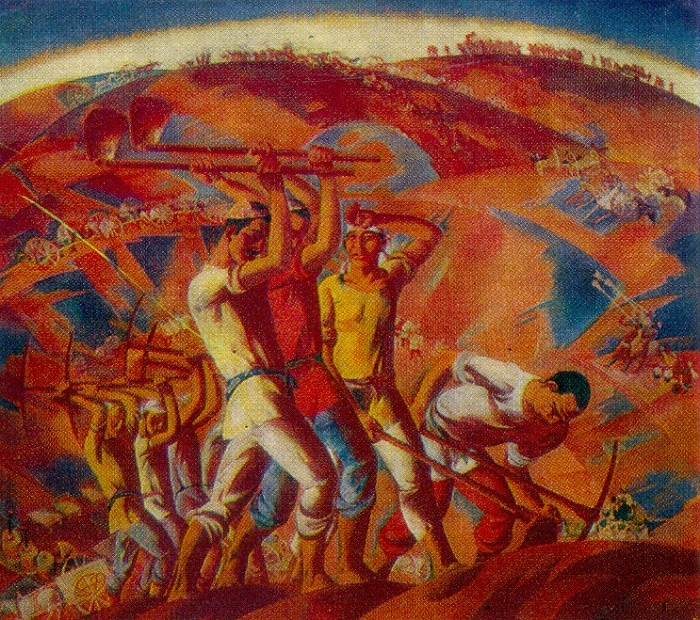 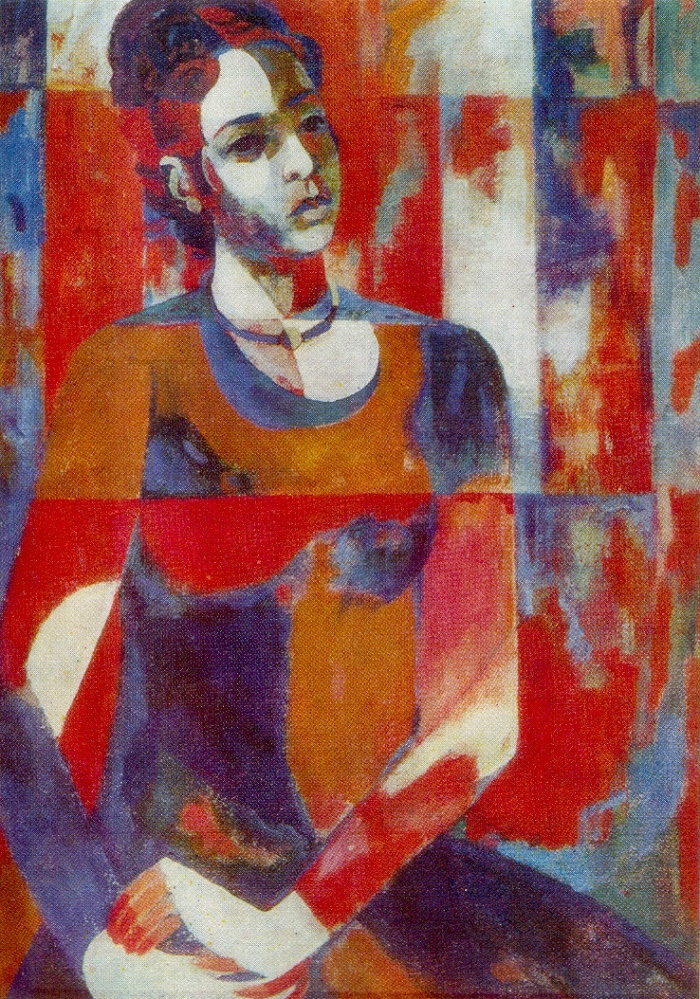 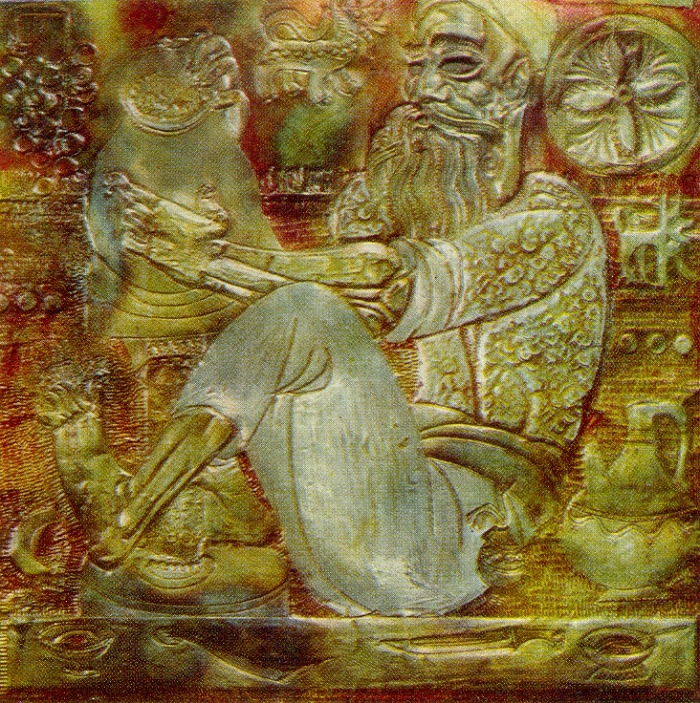 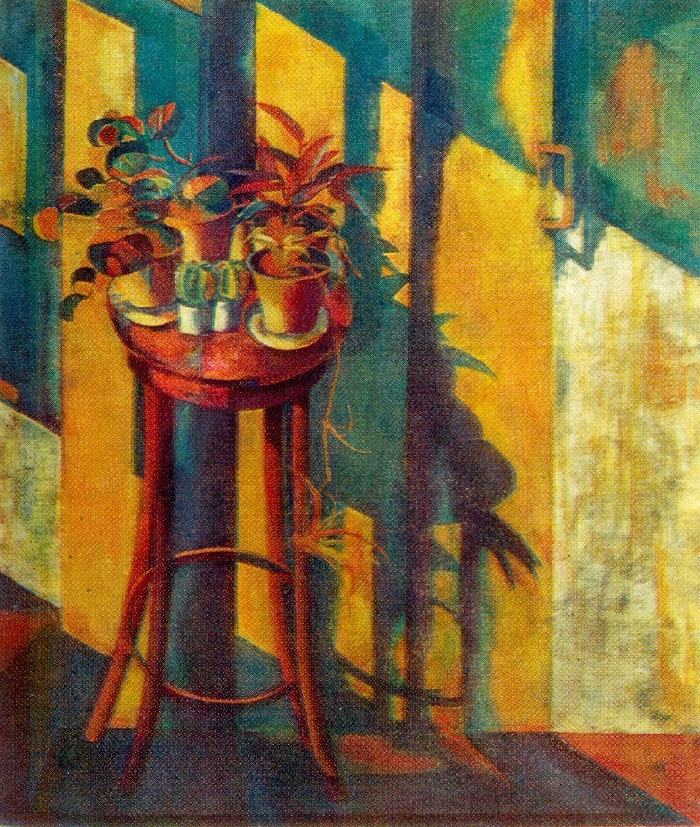 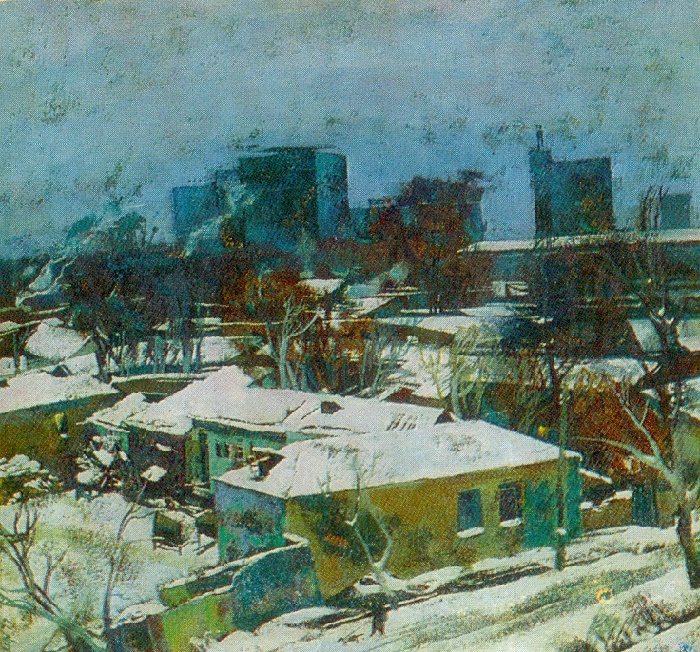 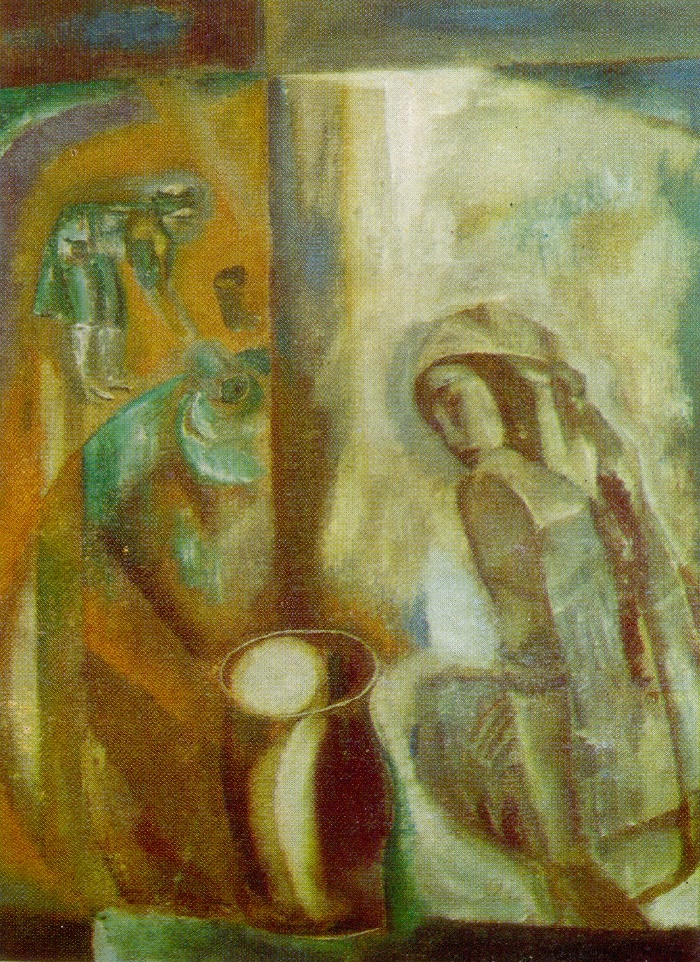 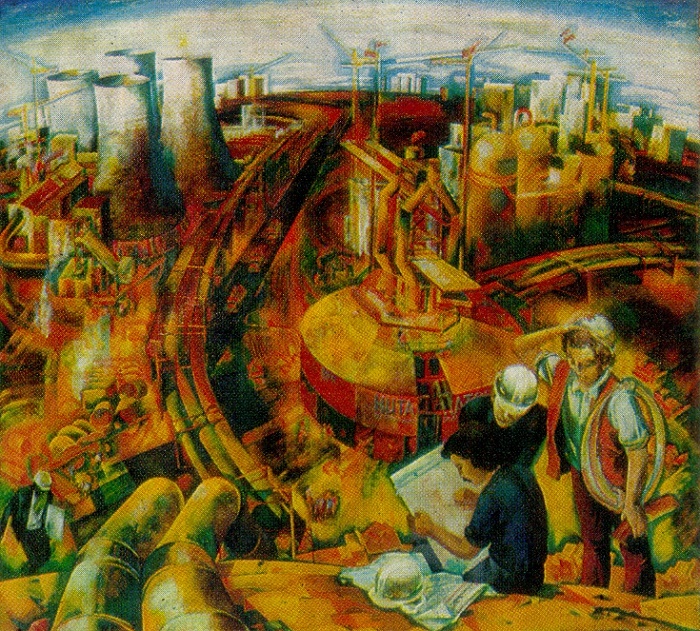 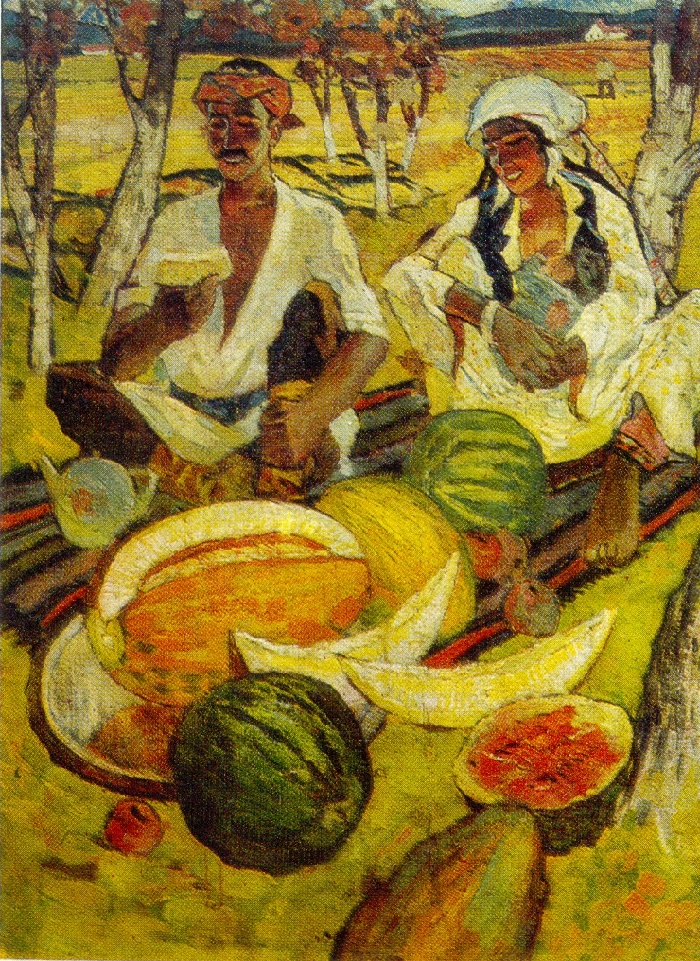 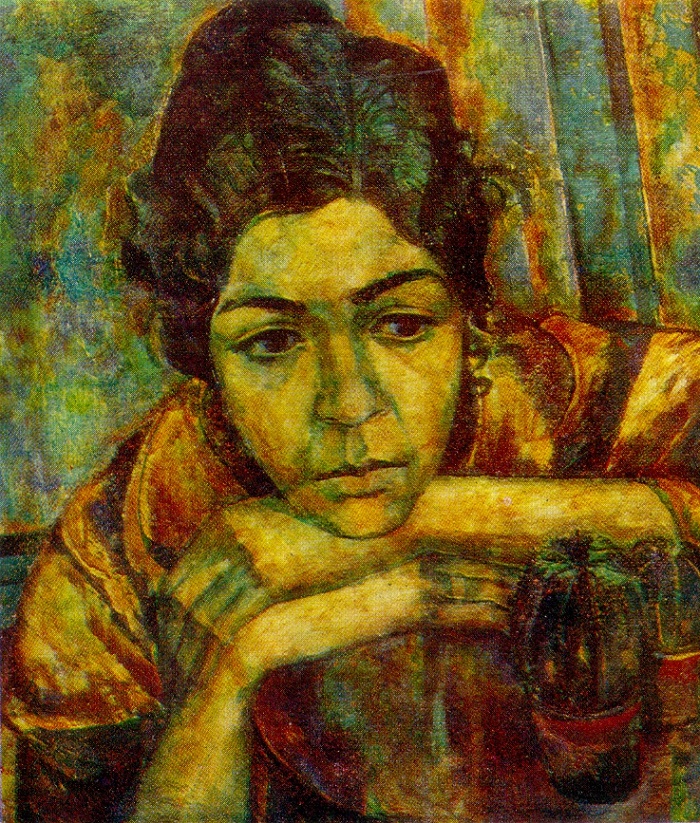 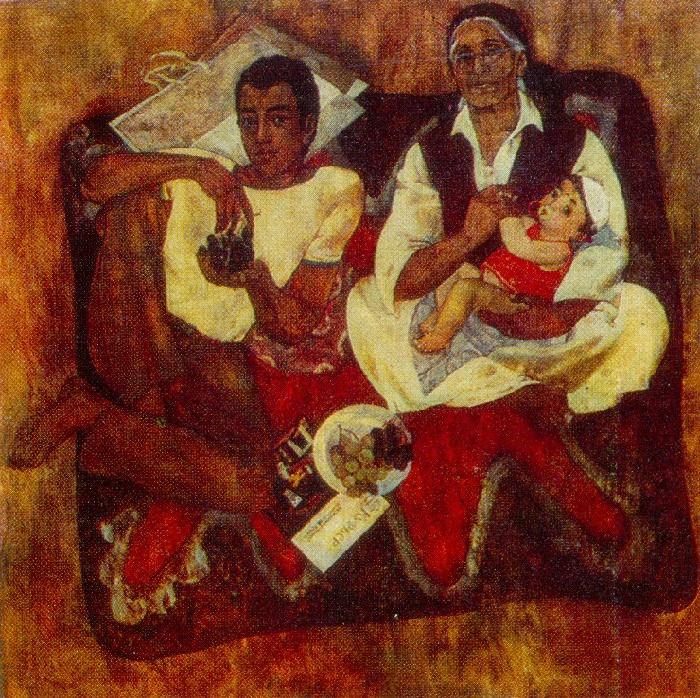 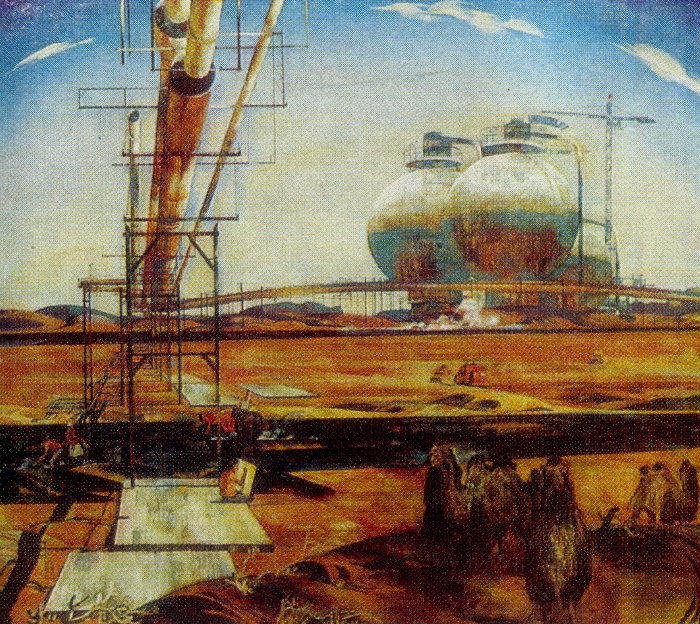 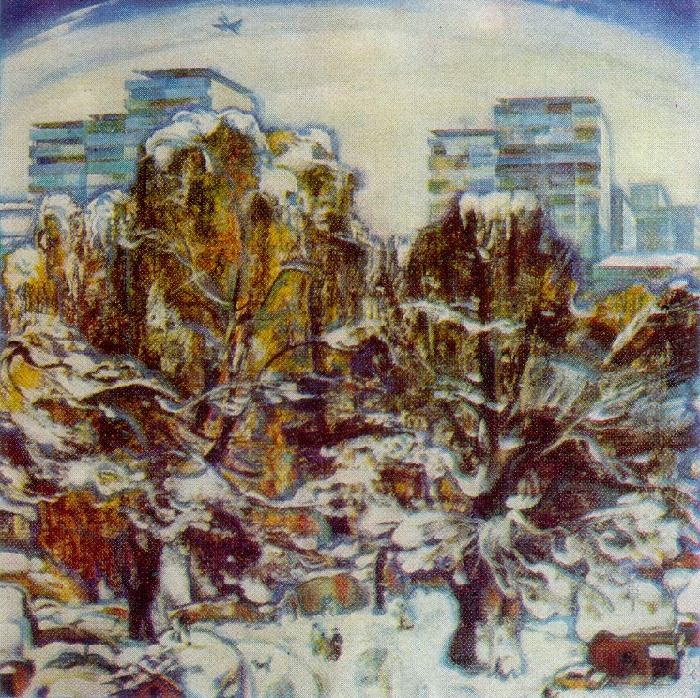 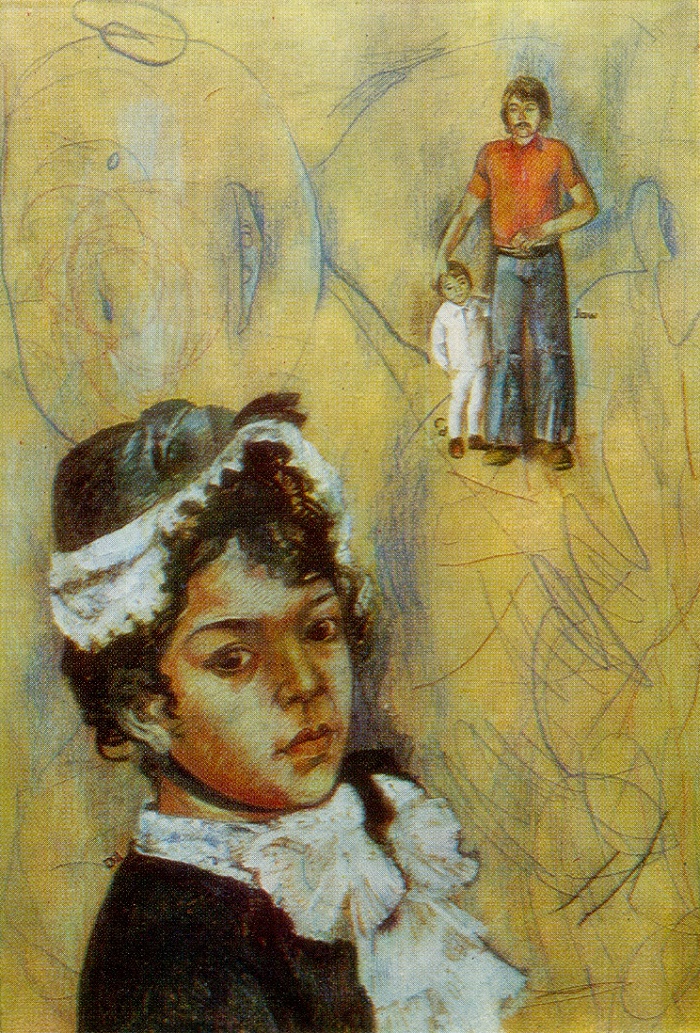 Portrait of Dilya in the spirit of Renoir. 1977 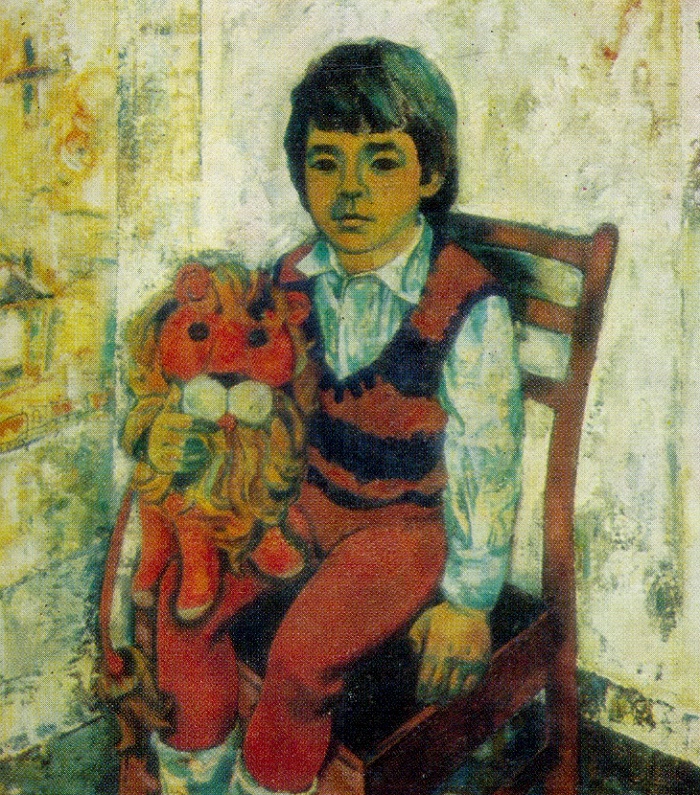 Portrait of Sardor with a red lion. 1976 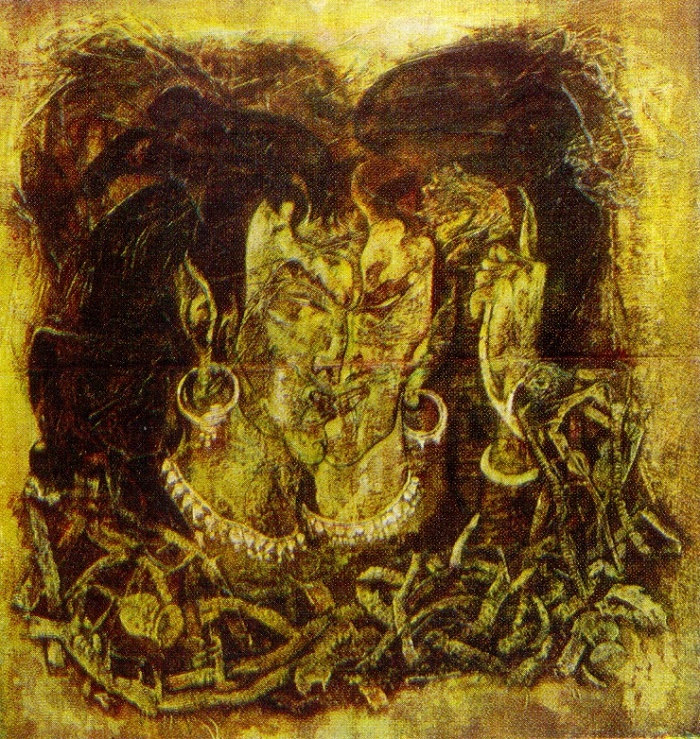 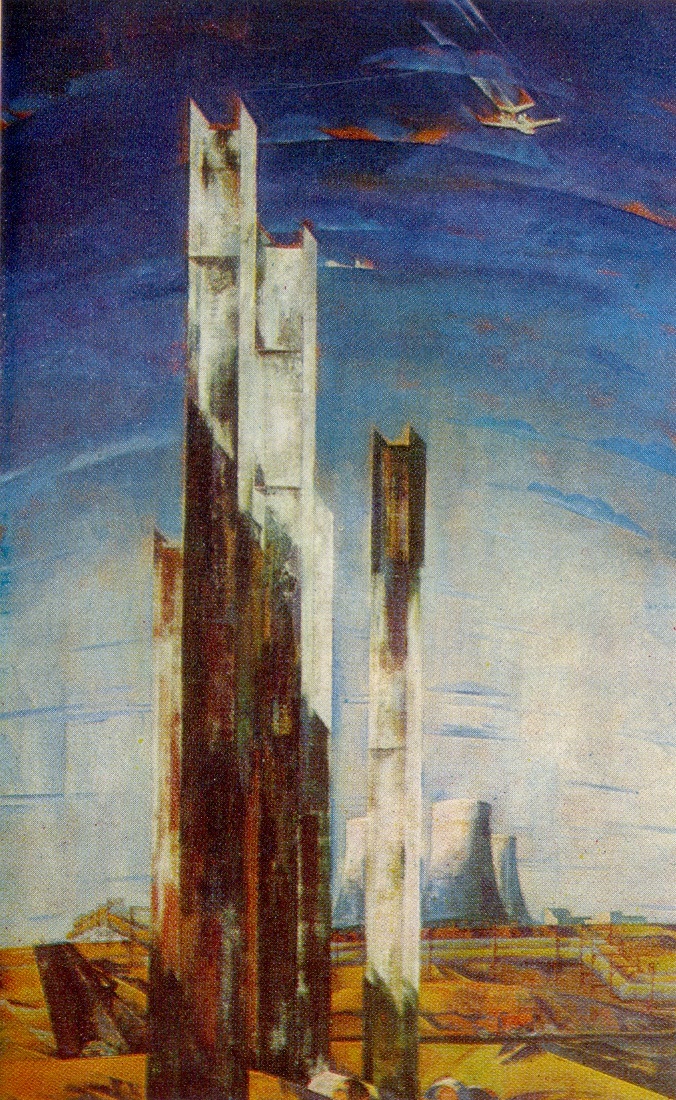 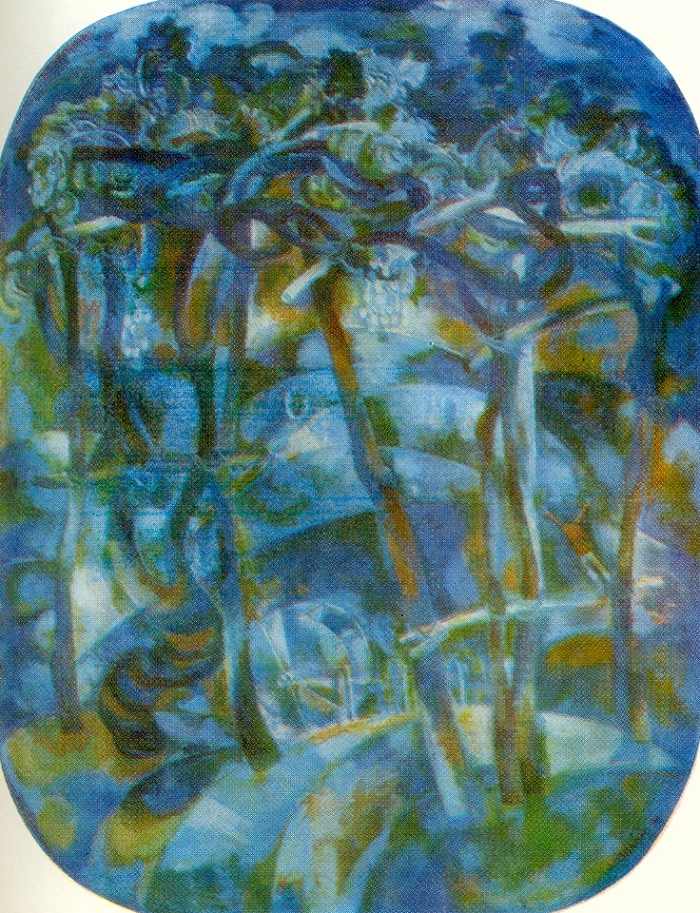 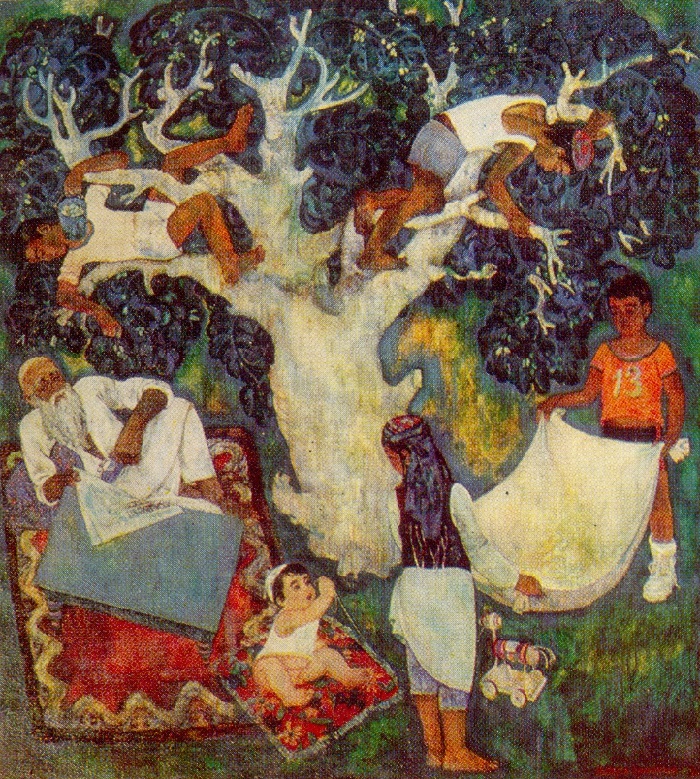 When the Mulberry ripened. 1975 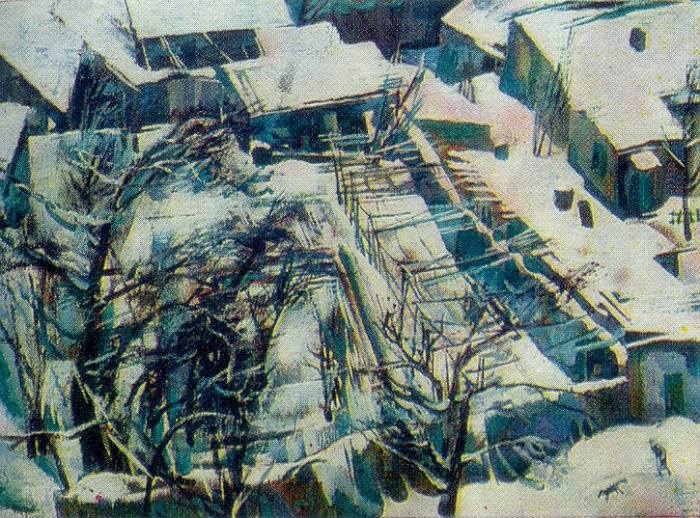 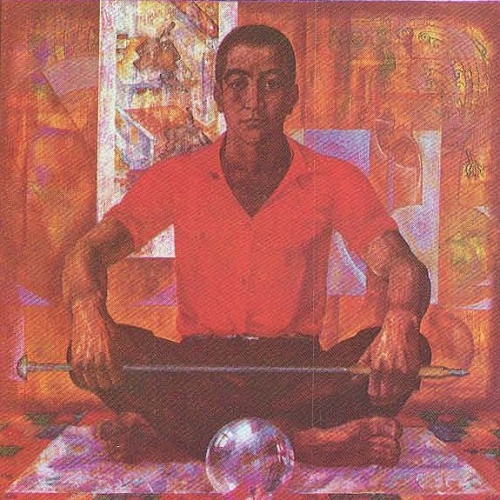 Mansur. Portrait of a Worker of communist labor glassblower of the plant ‘Mikond’ M. Umarbekov. Oil. 1978