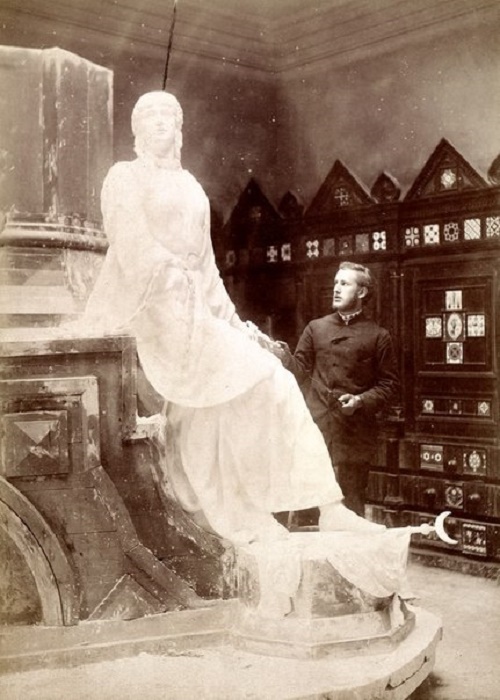 Soviet sculptor Leonid Shervud (28 April 1871 – 23 August 1954) – Honored Artist of the RSFSR (1946), doctor of art sciences was one of the first sculptors who carried out Lenin’s plan for “monumental propaganda”, starting from 1918. Leonid Sherwood was born in Moscow on April 28, 1871. Original art education he received in the studio of his father Vladimir Osipovich Shervud, academician of painting, working in the field of architecture and sculpture. Constant communication with famous figures of Russian culture and art visiting their house had a great influence on the world of young L. Shervud. Abilities of the boy appeared in the years of work in his father’s workshop. Initially, helping his father, he began to copy under the guidance of his father monuments of ancient sculpture, and then to work independently. 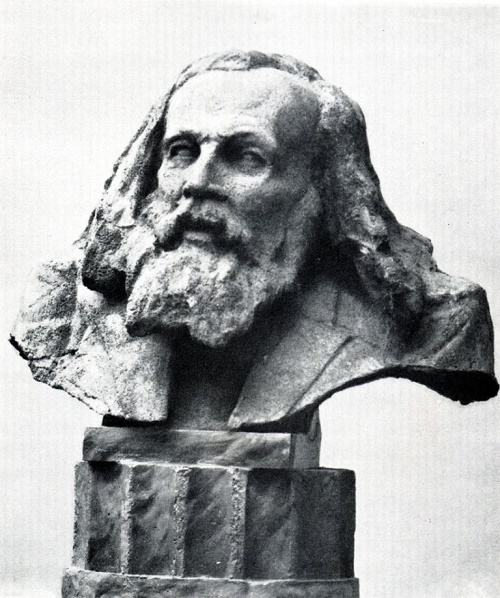 In 1886, LV Shervud entered the Moscow School of Painting, Sculpture and Architecture. The level of teaching at the School (Shervud graduated from it in 1891) was extremely high. Leading role there played realist artists VE Makovsky, Polenov, IM Pryanishnikov. Especially warm Sherwood recalled Vladimir Makovsky, who had a strong influence on him during this period. With Sherwood studied Golovin, VN Meshkov VN Baksheev, MV Nesterov, NP Bogdanov-Belsky.

Five years Shervud had spent in Moscow School of Painting, Sculpture and Architecture, was an extremely important time for the formation of his artistic views. The school has fostered in him a realistic approach to the phenomena of reality, the ability to find subjects for works in the life around him.

Creative principles of Shervud are clearly evident in the sketch “Coalman” (“Collier”), executed in 1896. Sherwood created the image of an old worker, a simple Russian man in the minute of rest. In this work, is visible complete freedom of the sculptor from academic canons, the complete absence of idealization of nature. Shervud primarily sought to create a deep psychological image. “Collier” by Sherwood – one of the first sculptural works, telling us about the intolerable conditions of existence of the workers in tsarist Russia.

His thesis work “Khan and slave” (1898) Shervud created during the student unrest in the Academy, where Sherwood was directly involved. After the graduation Shervud went abroad – Warsaw, Vienna, Munich and Italy. Here he carefully studied the works of great masters of the Renaissance – Verrocchio, Donatello, Michelangelo. A particularly strong impression on his monumental sculpture had Florence. “In this city, – wrote the sculptor – sculpture as if went out to the streets, striking statues by Donatello and Michelangelo – from museums to the open air”.

In 1900, Sherwood returned from abroad, settled in St. Petersburg, and began working on a portrait of Pushkin (finished in 1902). In subsequent years, Sherwood has executed a number of tombstones. First among them was was of great importance for the further development of the creative sculptor – tombstone of Gleb Uspensky, established in 1904 at the jetty of literary Volkov cemetery.

While still a student Shervud became friendly with the family of Gleb Uspensky, often met with the writer. Therefore, the work on the monument, he began with a special excitement. Working on the portrait of Uspensky, the sculptor used a mask that he removed from the deceased. Headstone of GI Uspensky, undoubtedly is one of the most successful works of Shervud in pre-revolutionary period.

By the Great October Socialist Revolution Shervud has become a mature sculptor, author of a number of famous works. Shervud has been in the forefront of sculptors, working hard on the implementation of Lenin’s plan of monumental propaganda. He was charged with the overall management of the installation of monuments in Petrograd. In addition, he created monuments of Radishshev and AI Herzen. “Radishchev” was opened on September 22, 1918, it was the first monument of monumental propaganda, opened in Petrograd and later in Moscow. The second copy of Radishchev bust on the order of Lenin was set in Moscow and opened October 6, 1918.

LV Shervud performed at this time several projects of monuments, including the design of the monument to the Decembrists. Soon LV Shervud was invited as the professor to the Free art workshops formed instead of closed Academy of Arts. In his pedagogical work he held more true principles than most artists, formalists, then taught in the workshops.

He continued hard work on the images of prominent figures of the revolution, science and culture. In 1922 Shervud refers to the portrait of Lunacharsky. A passionate speaker, with conviction and inspiration – so Shervud wanted to show Lunacharsky. This attempt to convey in the portrait bust the speaker, a controversial person has caused a number of objections.

In 1925, the sculptor took part in the competition for the monument to Vladimir Lenin at the Finland Station, working on a bust of the genius, the founder of the Soviet state.

Shervud continues to draw images of the great Russian scientists and thinkers. He performs the bust of Mendeleev for the Leningrad State University (1923-1925).

In the same 1927, Shervud created bust of the Soviet ambassador in Poland PL Voykov, killed by the Whites. The sculptor created a bright, romantic-sounding piece. For the bust of PL Voykov, Shervud was awarded at the Jubilee Exhibition in 1927 in Moscow.

The following year, 1928, the sculptor worked on busts of Stalin and Rosa Luxemburg. Bust of Stalin, which refers to the number of successful sculptural portraits of Shervud, is interesting because it is one of the first works devoted to Stalin in the Soviet art.

An important milestone in the creative development of Shervud, as well as throughout the history of Soviet art was a historic resolution of the Central Committee of the CPSU (b) April 23, 1932, restructuring literary and artistic organizations. Socialist realism became the guiding in the creative practice of Soviet artists, writers and composers as the only method that is truly and accurately reflects reality.

In the short term, and in difficult conditions Shervud finished statue of “Guard” in the size of 2.5 meters. Shervud portrayed Red Army soldier standing on duty. Dressed in a heavy coat and Budenovka, keenly gazing into the distance, he squeezes tightly in the hands handed by his homeland weapons. This figure expresses powerful calm, indestructible confidence. The “Guard” was a remarkable response of 62-year-old sculptor patriot to the 15-th anniversary of the glorious Red Army guarding the peaceful labor of the Soviet people.

During the Second Five-Year Plan, marked by the emergence of the Stakhanov movement and the rapid rise of socialist industry, Soviet artists create works that seek to reflect the labor heroism of the Soviet people. Images of the working class of our country, the people with a new, socialist attitude to work, take this time a prominent place in the creative practice of the masters of Soviet art.

During 1934-1937 LV Shervud worked on the image of a young worker of heavy industry and created a few options of the figure. Presented at the exhibition “Industry of Socialism” (1939) sculpture statue “Heavy industry” was the last and final version of this theme.

The Great Patriotic War found a sculptor in Leningrad. Together with all Leningraders he endures continuous shelling and bombing from the air, difficult living conditions in the besieged, starving city. But months spent by Shervud in besieged Leningrad, did not break his forces. Sculptor was full of creative plans, aims with his weapon to fight against the enemy, violating the peaceful labor of the country.

In 1942, due to many years of creative and pedagogical activity L. Shervud was awarded the degree of doctor of art sciences.

The Soviet people and its Government appreciated the merits of Shervud in the establishment of socialist realism art. In 1946, in connection with the 75th birthday, the sculptor was awarded the title of Honored Artist of the RSFSR. At the same time he was awarded the Order of Red Banner of Labor. 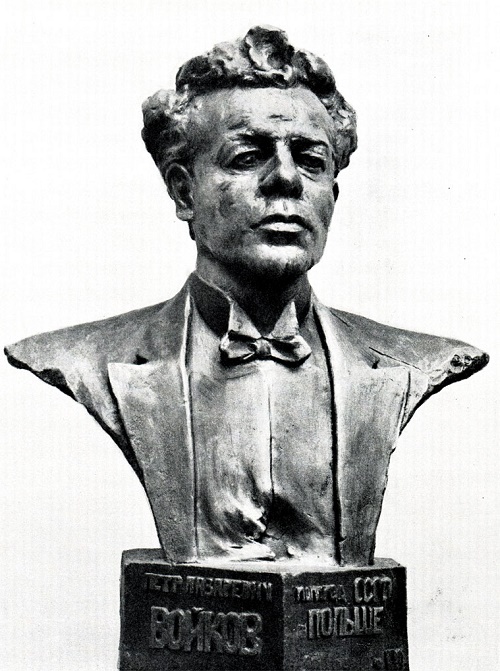 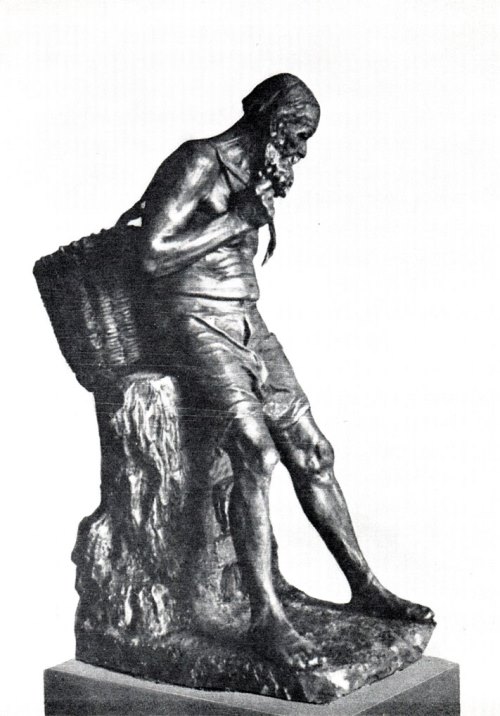 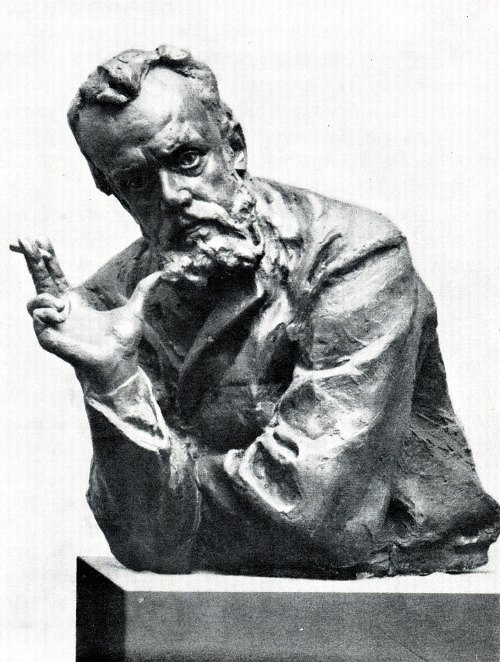 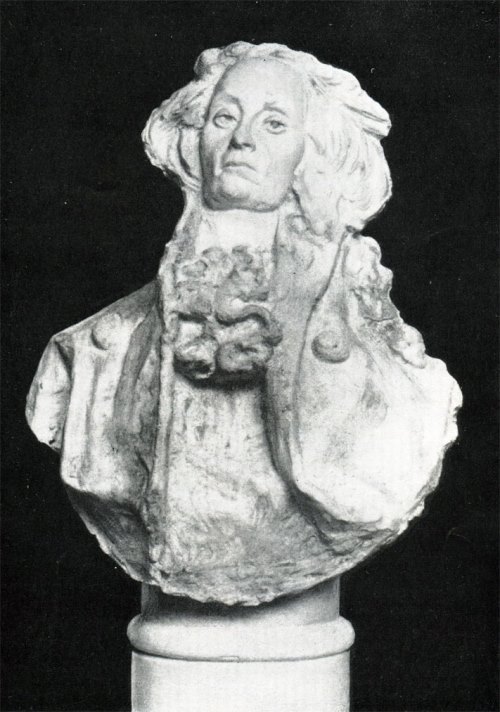 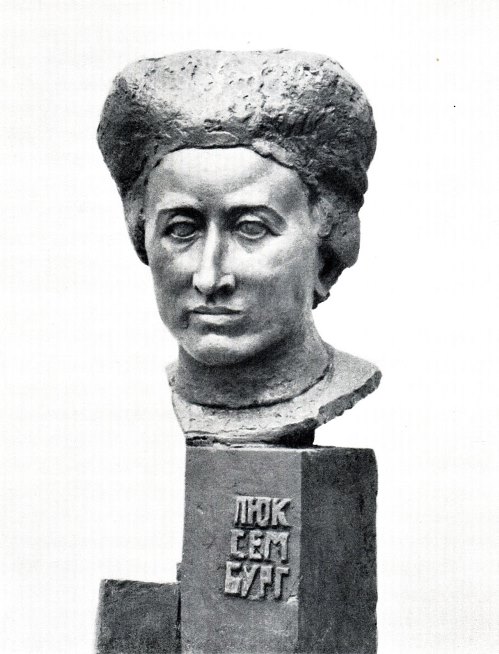 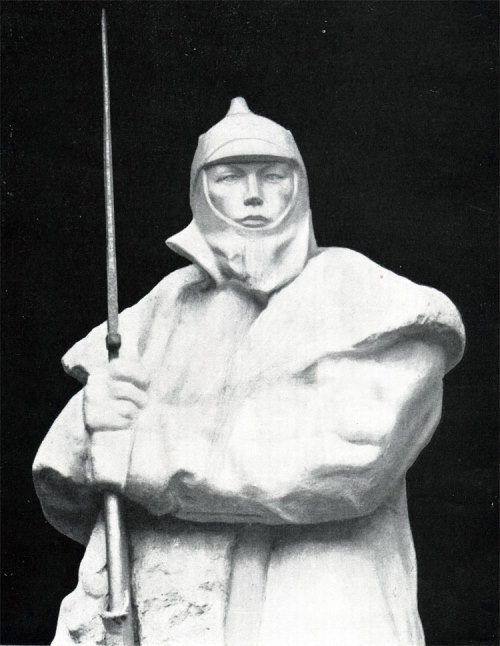 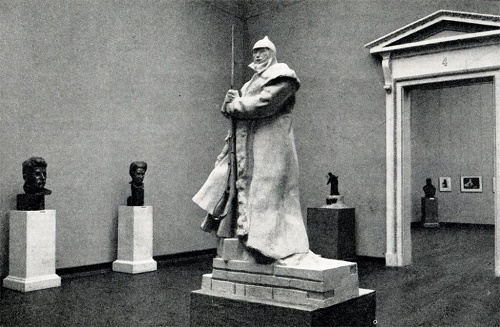 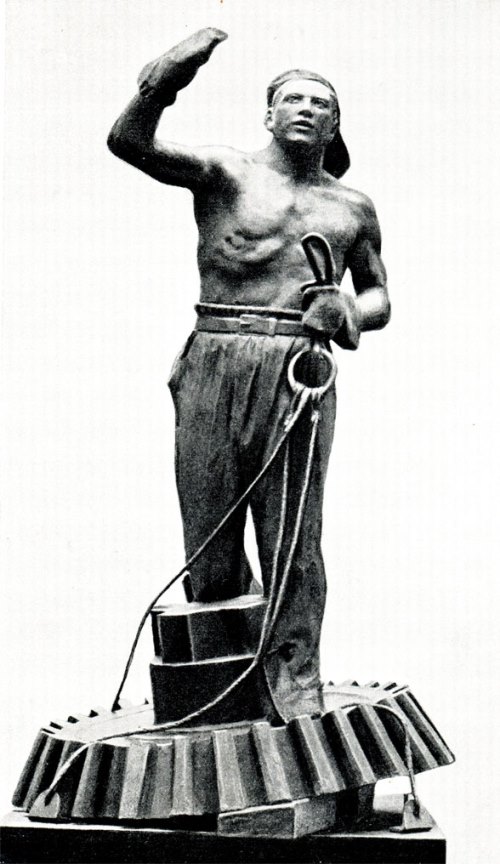 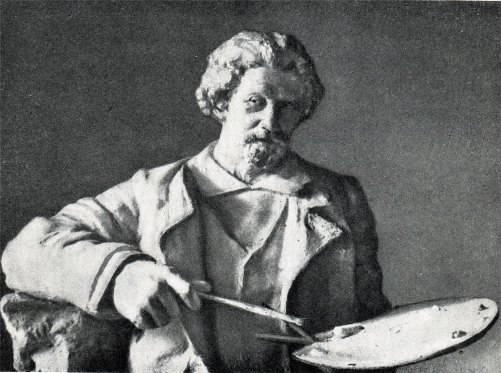 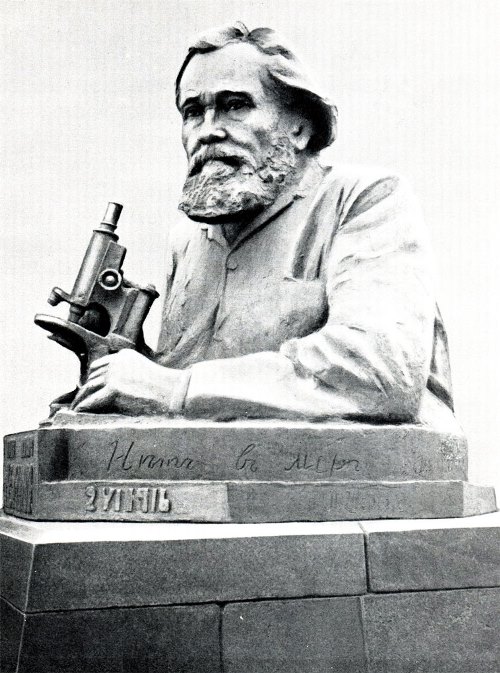 Project of Monument to I. Mechnikov. 1934 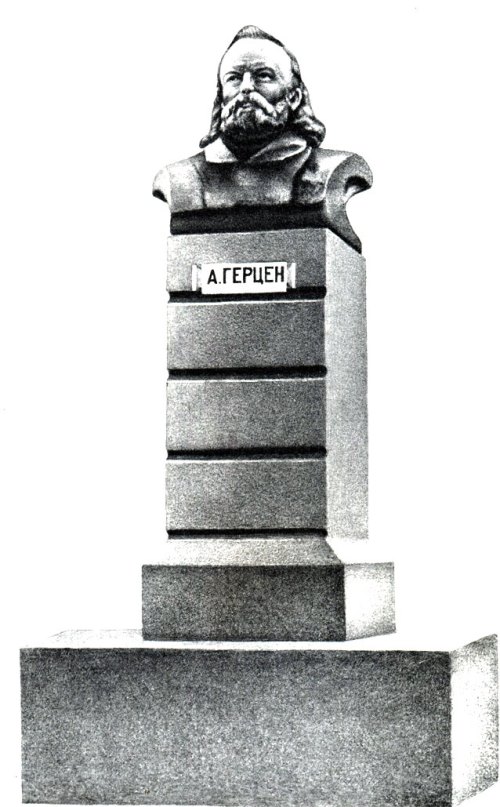 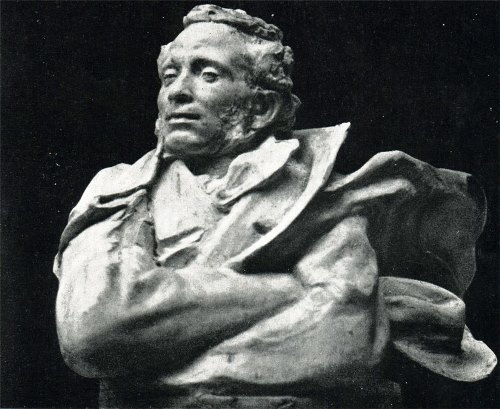 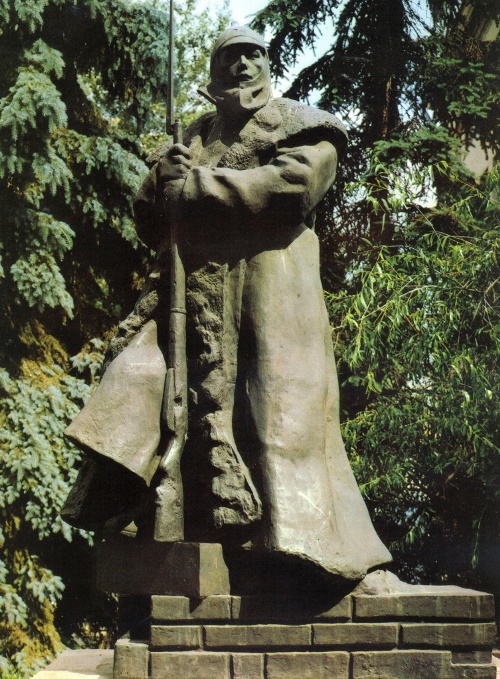