Distinguished by great plastic variety and impressive innovation of solutions is her composition “Self-Portrait (Sculptor and Sculpture, 1977). The genre motive – rest after work, is not a theme of peace, but an ongoing dialogue between the author and his creation. According to the sculptor, she found it very hard to part with her work. “They become for me living animated beings. It seems to me that they still live with me for some time, although they have long been taken out of the workshop. In fact, it is a rare example of sculpture in sculpture.

The portraits created by the master have a vivid individual expressiveness. Noteworthy, among her models, the sculptor preferred people of the creative professions. In particular, pianist Maria Yudina, physicist Alexander Kazansky, sculptor Gennady Lankinen, painter Alexander Bogoslovsky (junior), graphic artist Boris Kocheyshvili, and art critic Valentin Lebedev. Each of them remains in memory for a long time due to non-standard plastic moves-metaphors. Often, giving the heroes their wings, the sculptor likens them to angels and thus denotes their good nature. 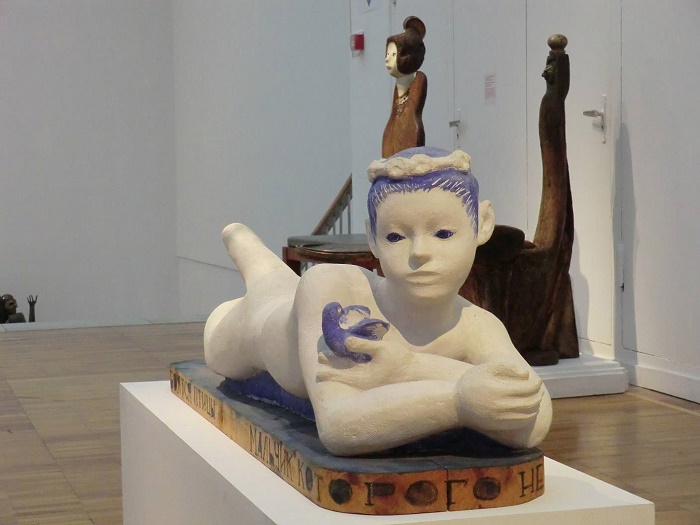 ‘A boy, whom the birds are not afraid of’ sculpture

Meanwhile, the favorite genre of the sculptor – figured portraits. In the composition “Artist B.P. Kocheyshvili” her friend and pupil depicted at the moment of communication with the invisible spectator by the interlocutor. Sitting across the chair, surrounded by interior layout rooms, he says something animatedly, like a mime, actively gesticulating with thin, plastic hands. The dynamic figure as if involves in its orbit the surrounding space, transformed under the pressure of the hero’s energy portrait. According to the recollections of the model, Adelaide Germanovna first cut out the outstretched fingers of the wooden model, but they “turned out to be short, and one immediately broke off.” Then Kocheyshvili, in whose presence the sculpture was born, “went to the forest and wandered there for a long time, looking for ten branches, similar to his fingers, applied for comparison. Pologova liked this idea and immediately replaced her thick fingers with twigs.”

A. Pologova. Interior in the workshop with blue cat. 1977. Wood, painted

Heroes of the composition “Art critic VA. Lebedev and his Muse” is her friend and the main researcher of her work, Valentin Alekseevich Lebedev with his favorite dog named Artem. The sculptor has given each figure a single wing, metaphorically transferring the inseparable inner connection between the owner and the pet. The dog resembles the winged horse Pegasus, a symbol of inspiration and contemplation. 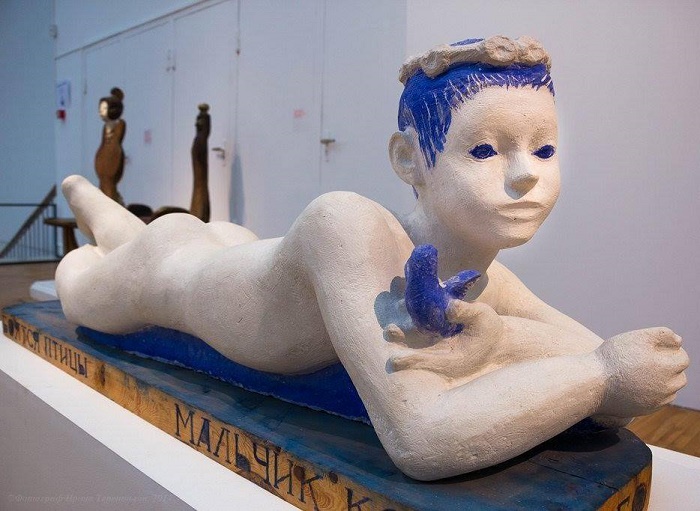 A boy, whom the birds are not afraid of

Adelaida Pologova. Interior in the workshop with blue cat. 1977 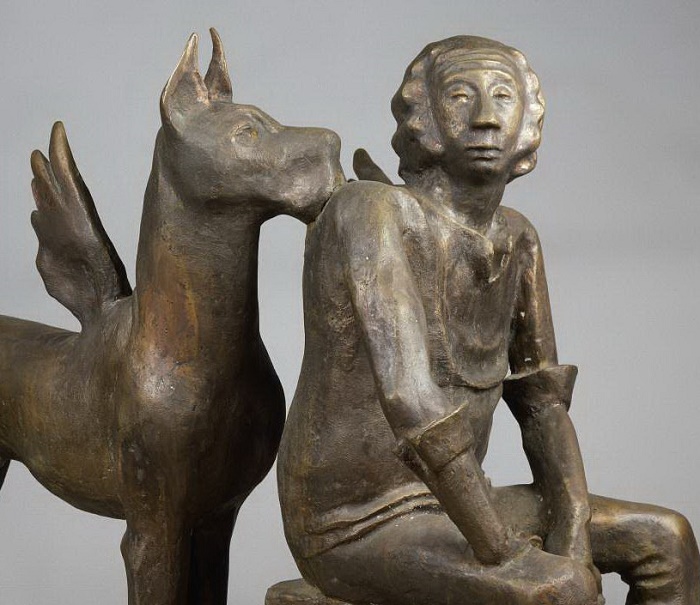 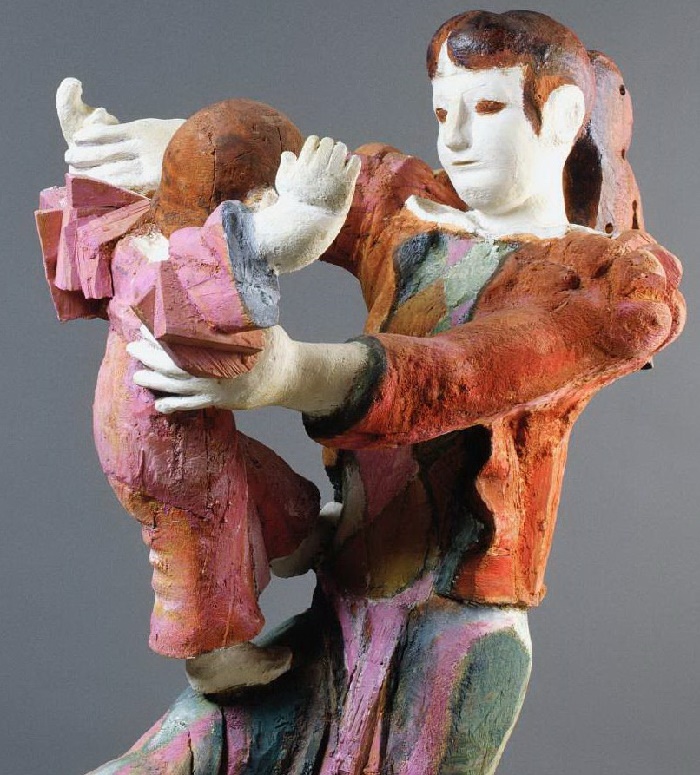 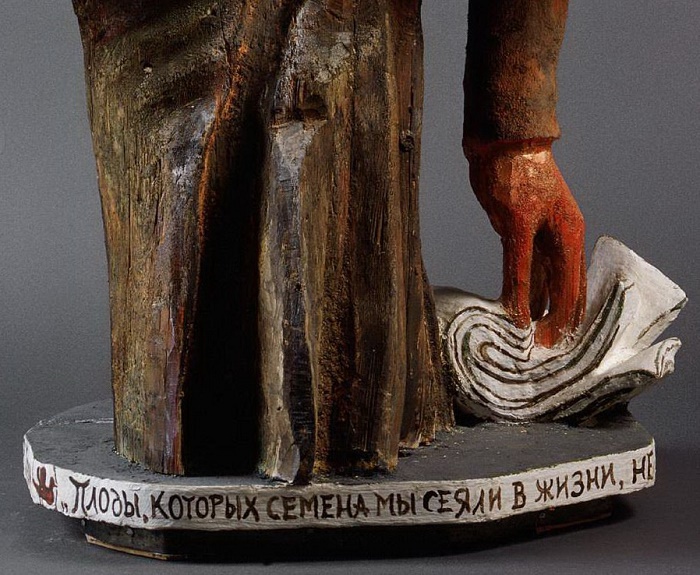 Go and save my trail. 1987. Wood sculpture, gilding, painting 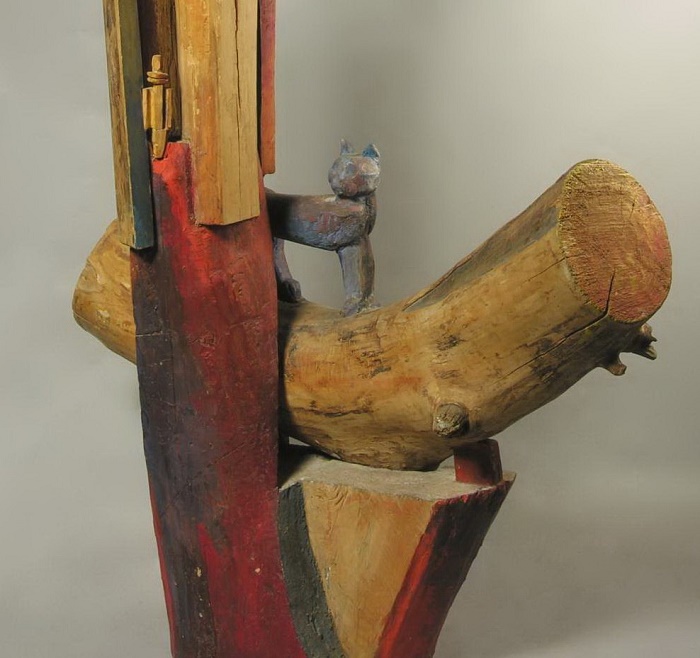 Interior in the workshop with blue cat. 1977. Wood, painted 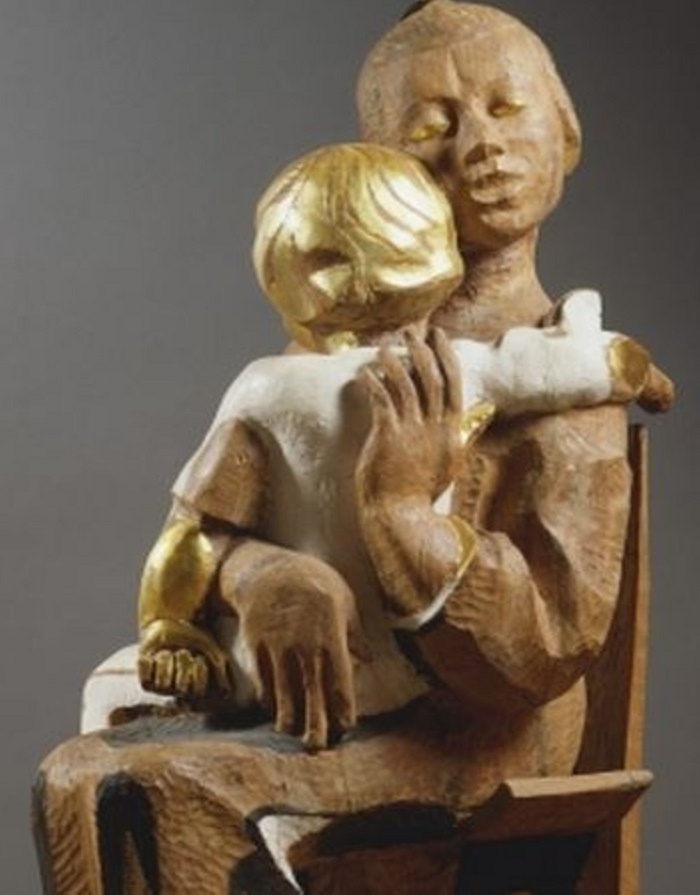 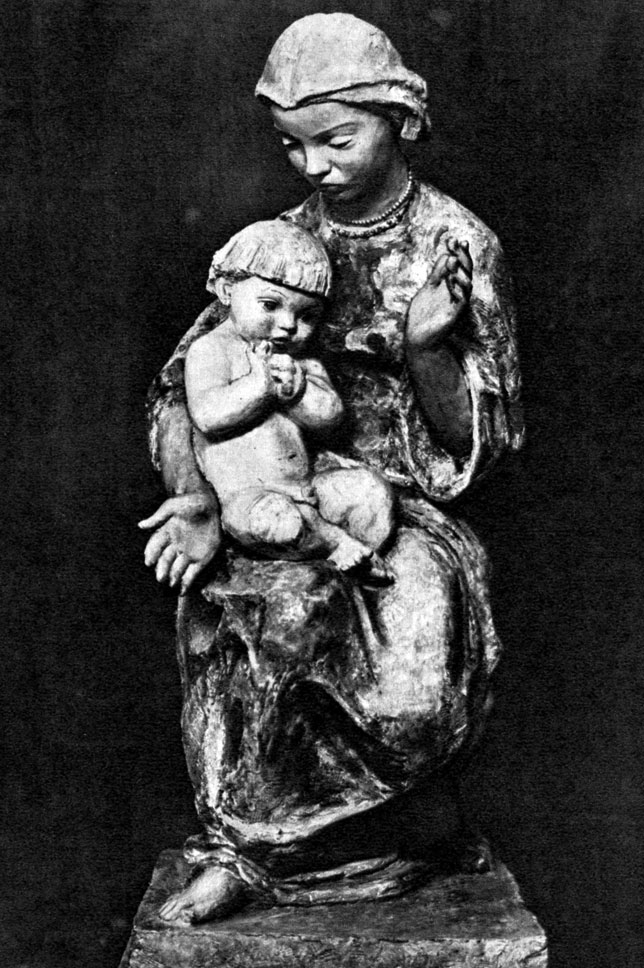 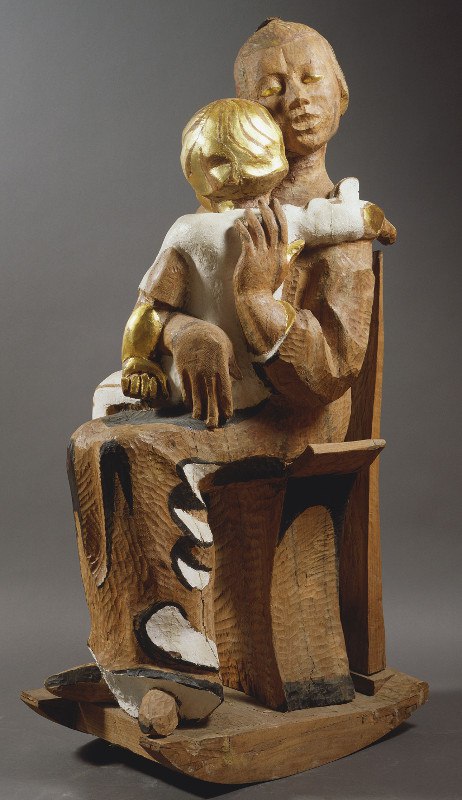 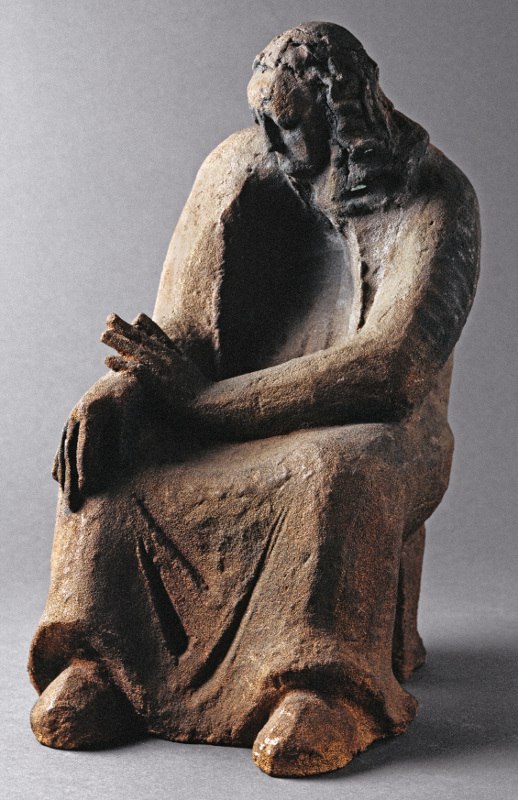 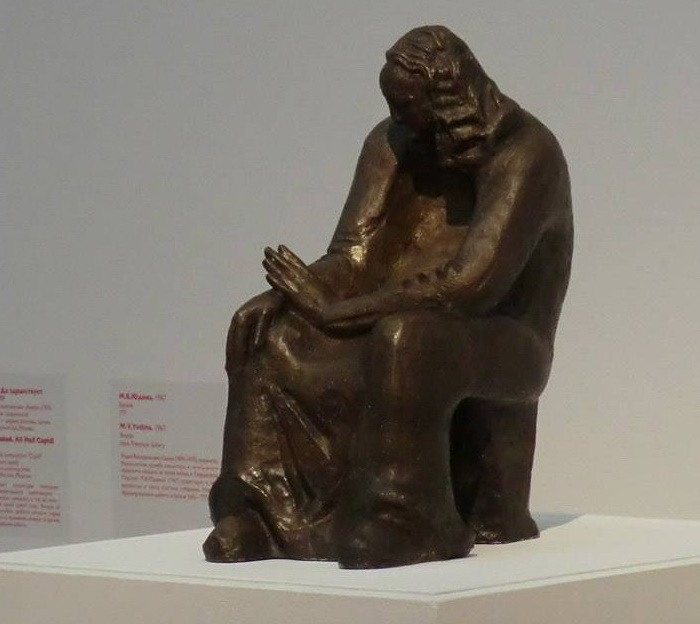 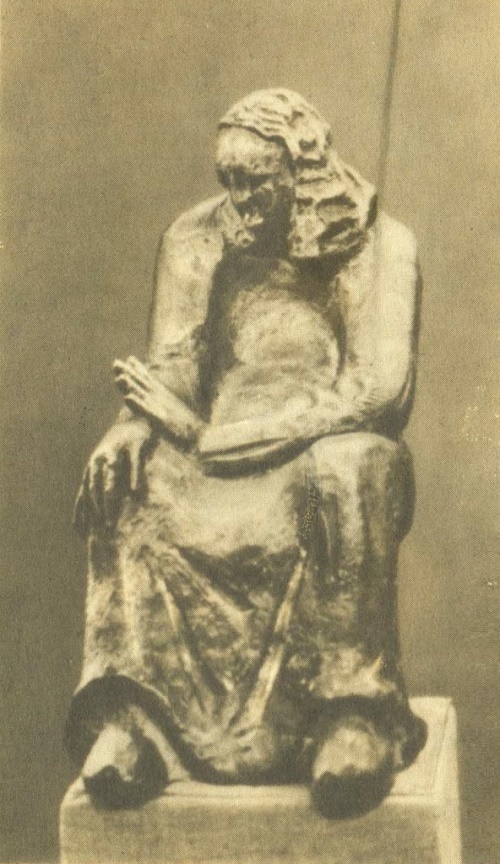 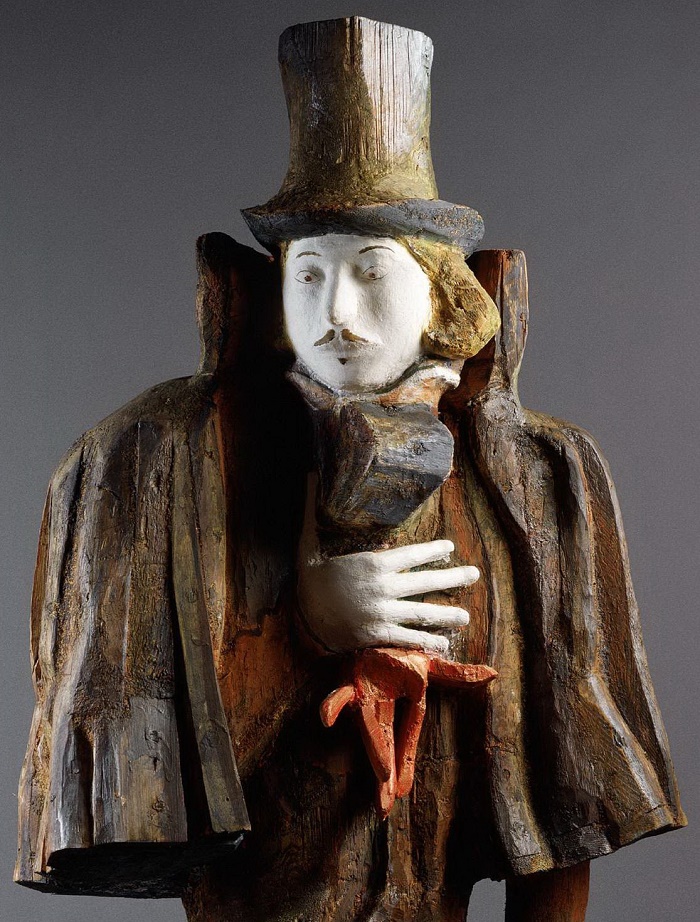 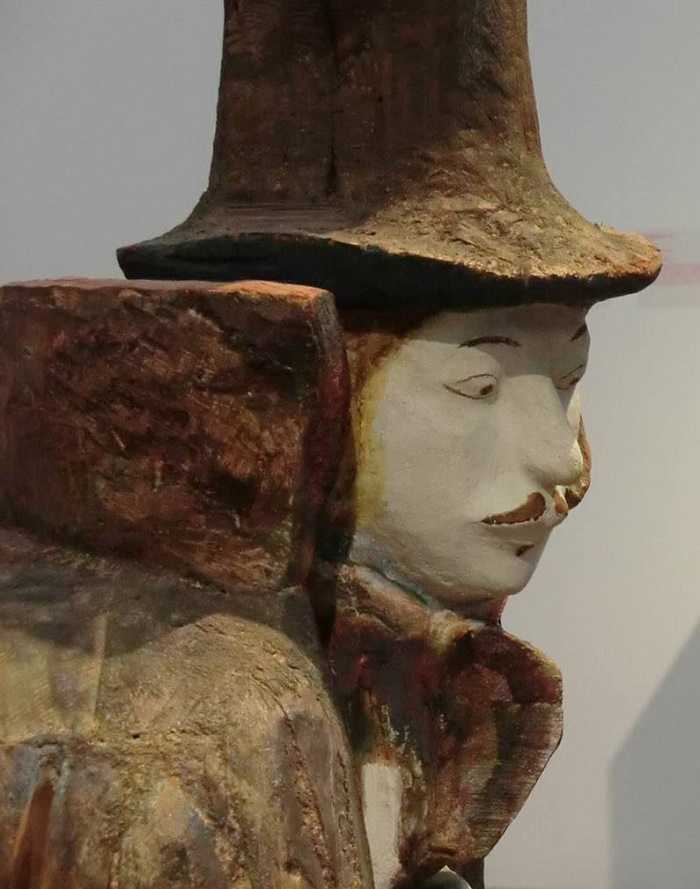 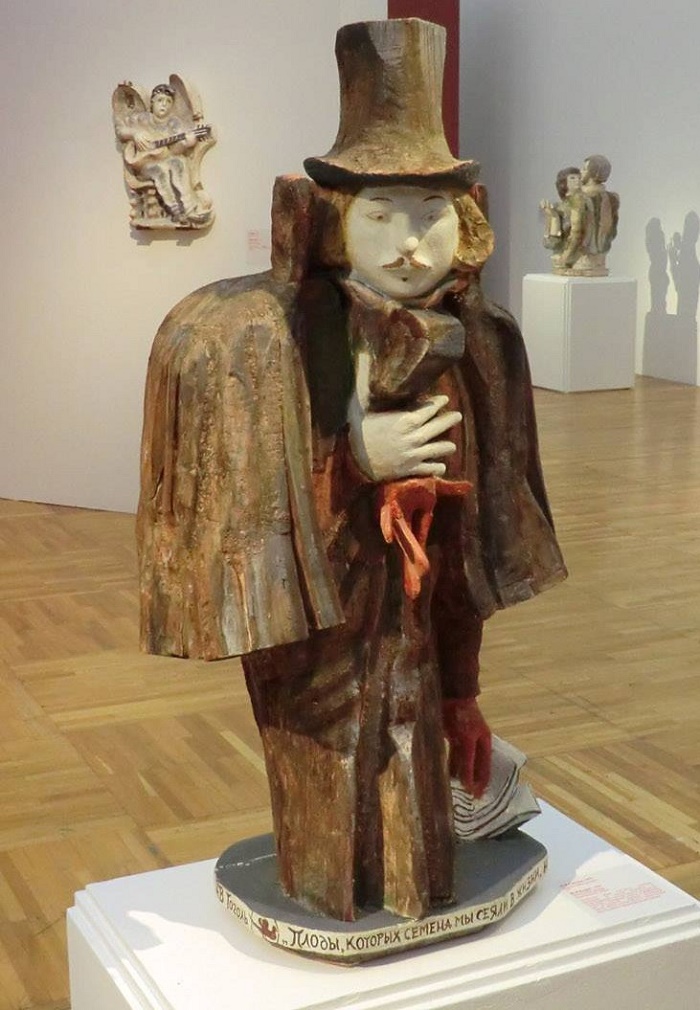 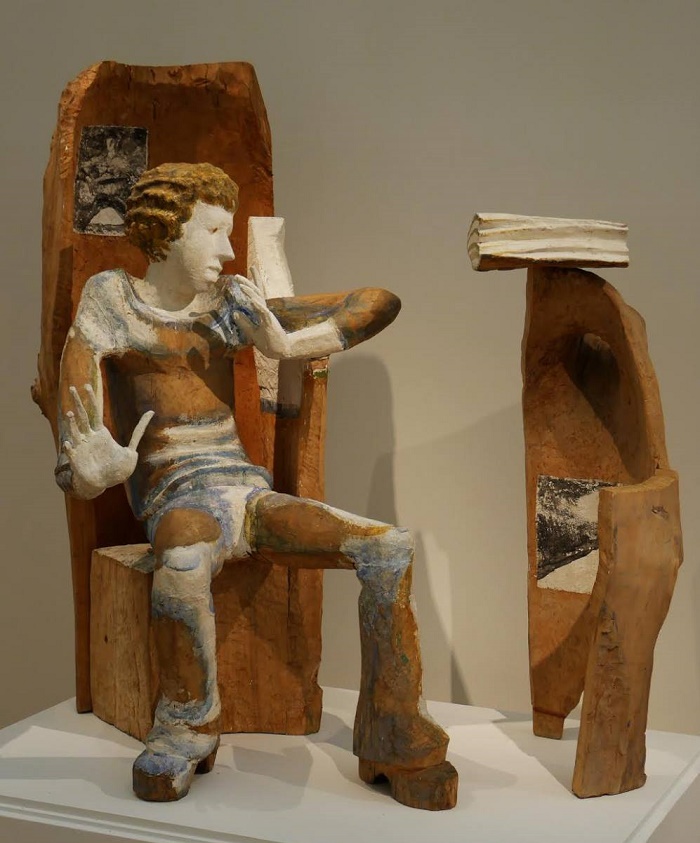 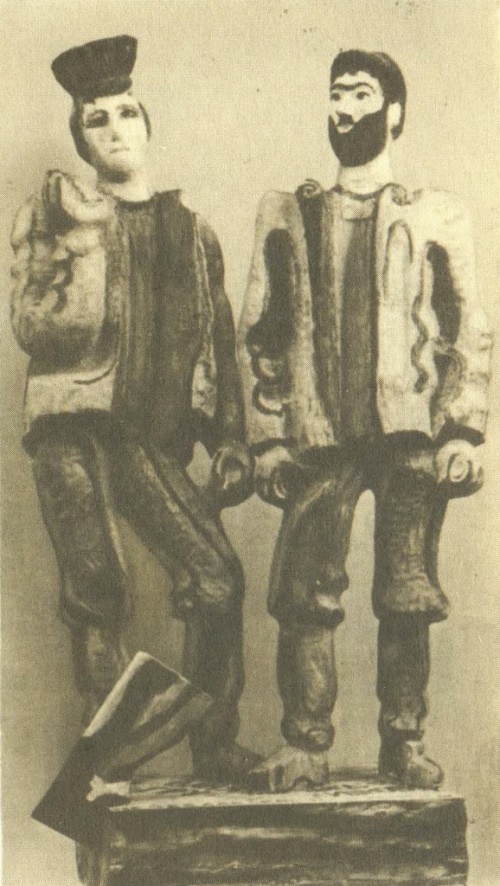 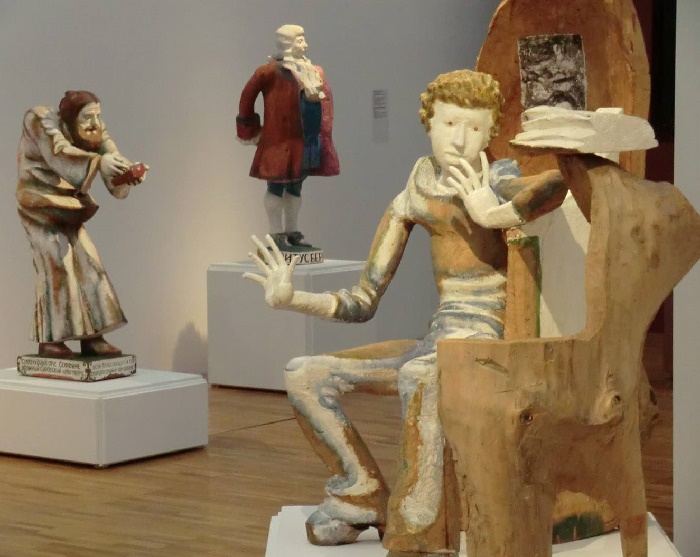 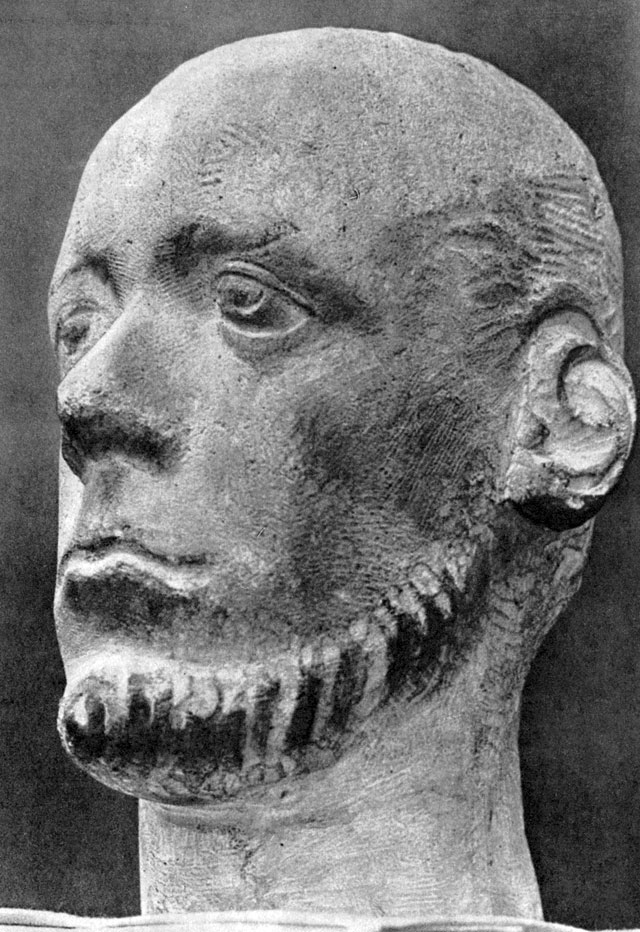 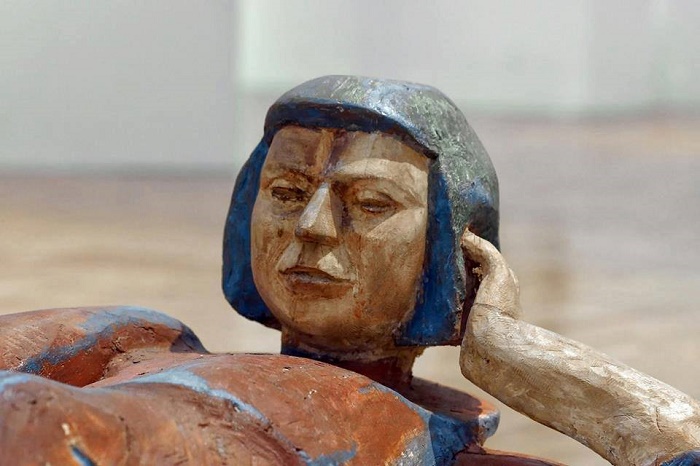 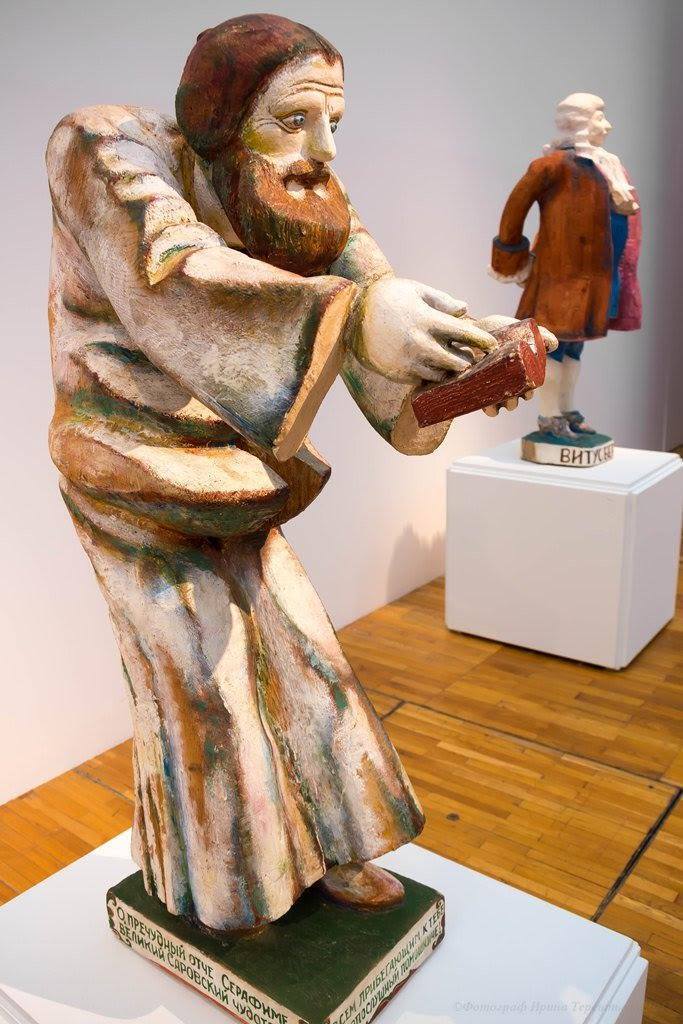 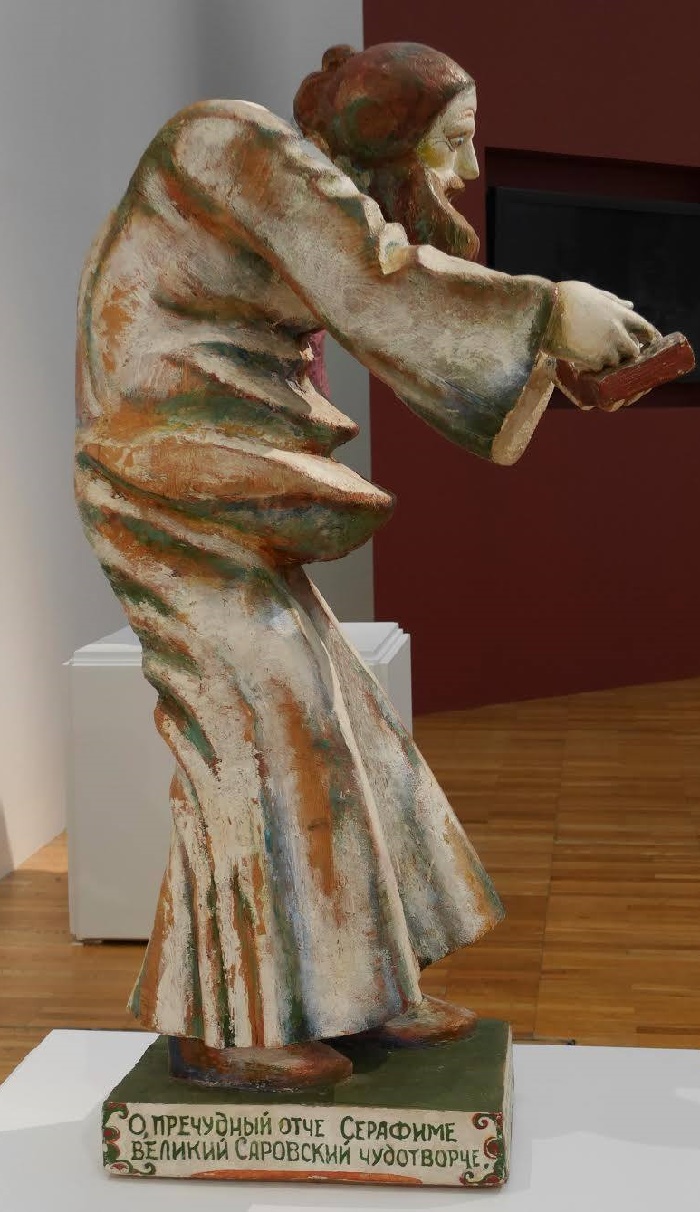 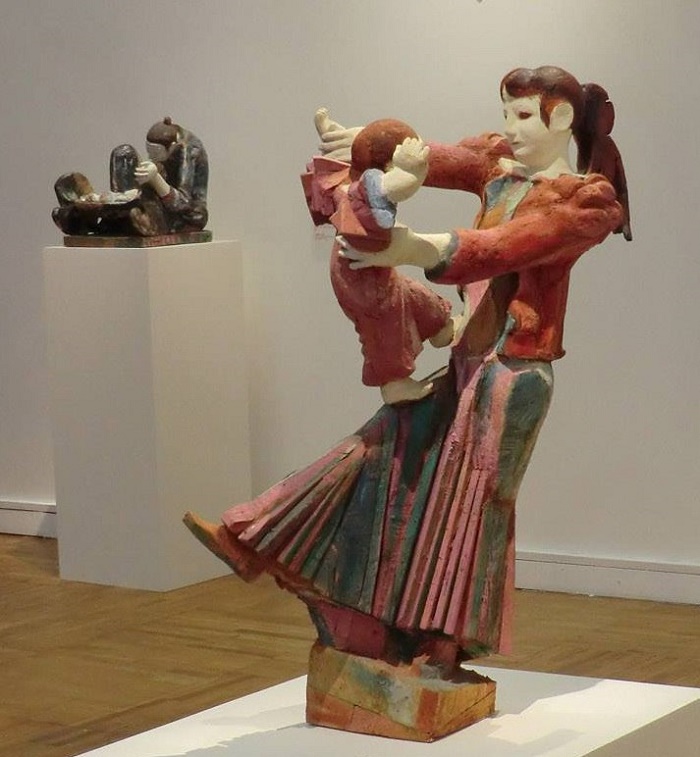 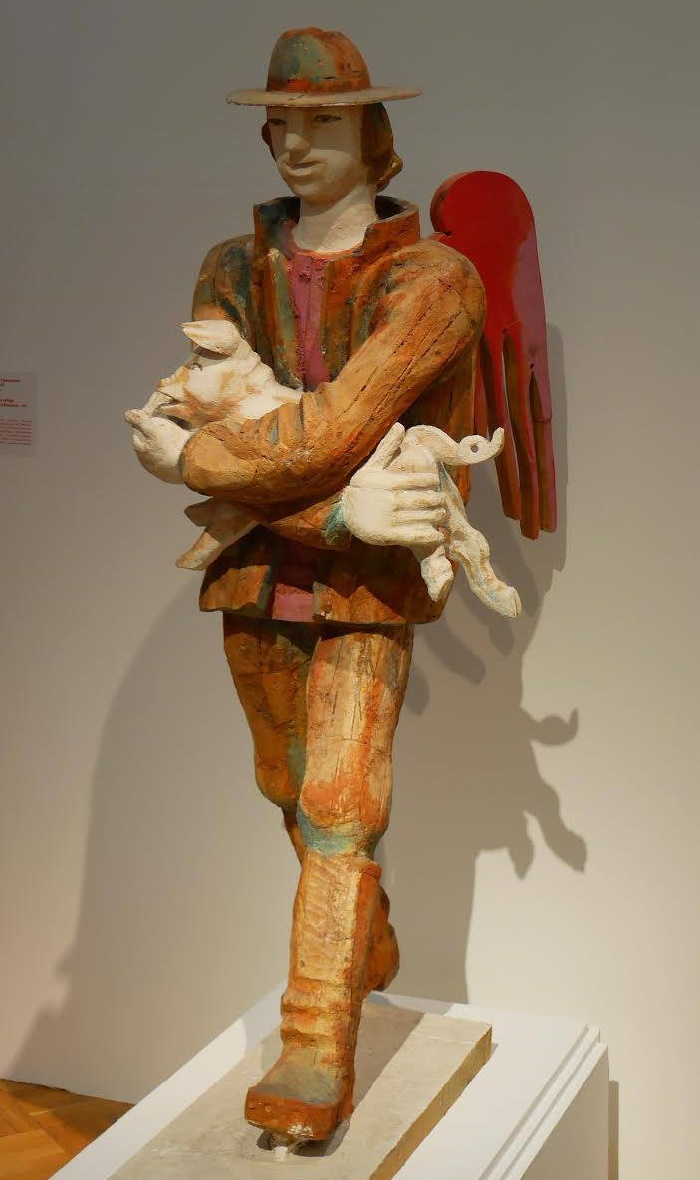 Veterinarian of the village of Gremyachevo A.V. Pimenov, 1987 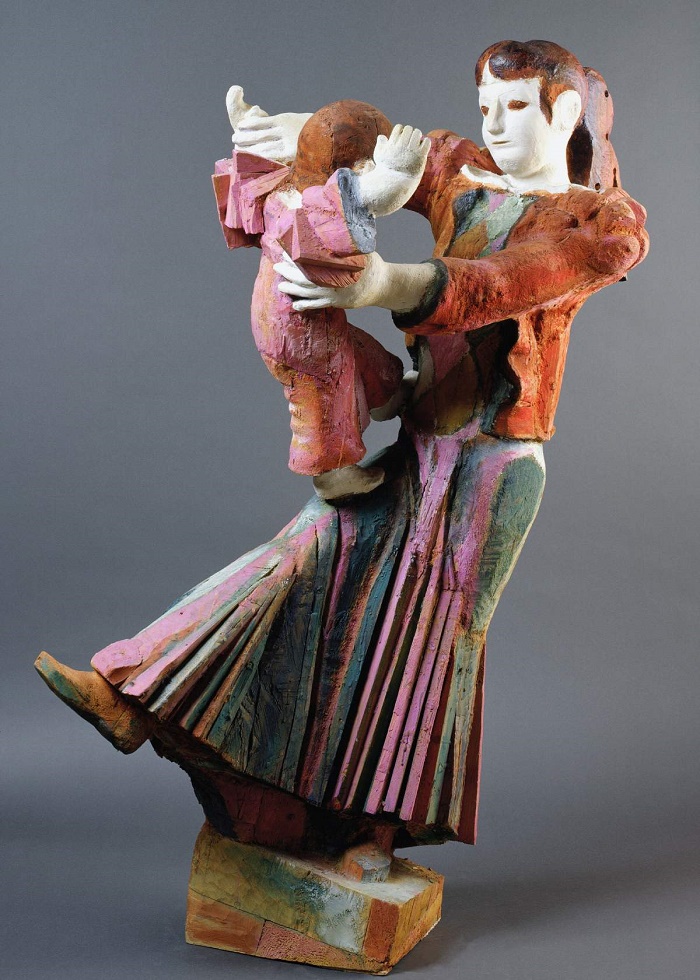