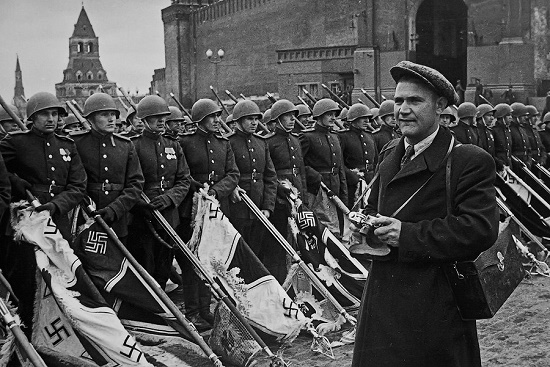 Legendary Soviet photographer Evgeny Khaldey, together with his Leica camera, passed all 1,418 days of the war from Murmansk to Berlin. Photos of Evgeny Ananievich Khaldey (23 March 1917 – 6 October 1997) have become a classic of military photo coverage. Well known to the whole world, they are often cited as illustrations in a huge number of textbooks and encyclopedias. First of all, it was the picture “The Banner over the Reichstag” created in May 1945, which became a true symbol of the Victory, as well as the famous photo “The First Day of the War”, taken in Moscow on June 22, 1941.
At the Nuremberg trial, one of the physical evidence was photographs of Khaldey. Participated in the liberation of Sevastopol, the storming of Novorossiysk, Kerch, the liberation of Romania, Bulgaria, Yugoslavia, Austria, and Hungary. Member of the filming of the Potsdam Conference, the Paris Conference and the Nuremberg Trials. After the war, he created a gallery of images of soldiers in peace work. 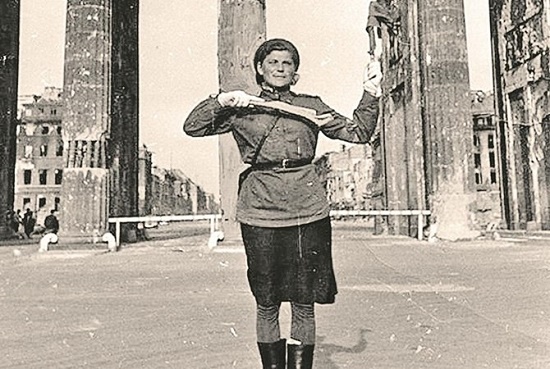 The regulator Masha (Maria Filippovna Limanskaya) became Madonna thanks to Evgeny Khaldey. Together with the Soviet troops, Maria Limanskaya reached Berlin. On May 2, Maria Filippovna was already at the Brandenburg Gate, on the other side of the Reichstag. A well-known military photographer made a promise to himself at the beginning of the war: if he lives to see Victory, he will necessarily take pictures of the trampled Brandenburg Gate. Today this photo is a symbol of Victory over fascist Germany: bullets and shrapnel gates, at the top – banner “Glory to the Soviet troops …”, and in the foreground – a young regulator Masha, who suddenly became Brandenburg Madonna. 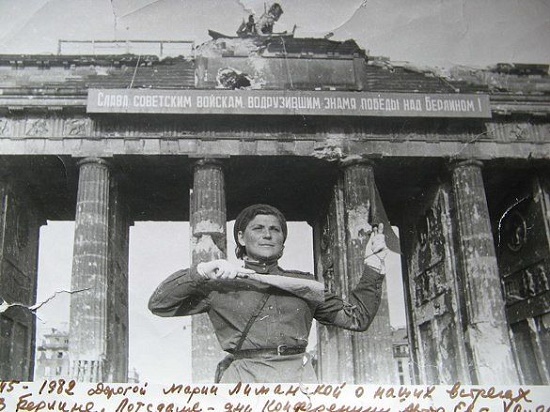 To dear Maria Limanskaya, for memory about our meeting in Berlin, photo signed by Khaldey

Now Maria Limanskaya lives in a small village of Zvonarevka in the Saratov region. By the way, the granddaughter of Maria Filippovna married a German. She left for Germany, and together they bring up six children. The guys found the very place where their great-grandmother stood at the Brandenburg Gate, and took pictures there. However, the gate is now completely different – restored. (Source: newspaper “Komsomolskaya Pravda”)

Born in Yuzovka (now Donetsk), he lost his parents killed during the Jewish pogrom on March 13, 1918. And the one-year-old child Evgeny Khaldey received a bullet wound in the chest. He studied in heder, from the age of 13 began to work at the plant. First shot he, 13 year-old boy, made with a self-made camera. From the age of 16 he started working as a photojournalist. Since 1939 he was a correspondent of the “Photo chronicles of TASS”. He photographed Dneprostroy, reported about the work achievements of Alexey Stakhanov.

Besides, he represented the editorial office of TASS on the naval front during the Great Patriotic War (1941-1945). All 1,418 days of the war, he went with the camera “Leica” (sold at auction “Bonhams” for 200 thousand dollars in 2014) from Murmansk to Berlin. He took photos of the Paris meeting of foreign ministers, the defeat of the Japanese in the Far East, the conference of the heads of the allied powers in Potsdam, the hoisting of the flag over the Reichstag, and the signing of the surrender of Germany.

In 1995, in Perpignan (France), at the International Festival of Photojournalism, Yevgeny Chaldei received the most honorable award in the art world – the title “Knight of the Order of Arts and Literature”. Yevgeny Khaldei died on October 6, 1997, buried in Moscow at the Kuntsevo Cemetery.

A song about JV Stalin. The Bolshoi Theatre. Moscow. December 1949

Banner of Victory over the Reichstag. May 1945

From the series The First Soviet Nuclear Vessel Lenin 1960

German nazis in Sevastopol, May 1944

Graduates on the Red Square. Moscow 1965

In the liberated Sevastopol, May 1944

In the shop of the Lomonosov Porcelain Factory. Leningrad 1954

Lunch in the kindergarten by the sea. Sevastopol, 1944. Photo taken after the liberation of Sevastopol from the Nazis

Marshal GK Zhukov during the signing of the Act of unconditional surrender of Germany. Karlshorst. Berlin. May 1945

Mstislav Rostropovich is at home. Moscow 1951

Prisoners of War. From the Crimea series

Salute in the liberated Sevastopol, May 1944

Soviet soldiers stand with the Nazi banners lowered during the Victory Day parade on Red Square in Moscow, June 24, 1945

Sunday in the working family. Gorky, 1956

The queue to the Lenin Mausoleum. Moscow, Red Square in the early 1960s

Woman-mechanic. The new harvest of 1954