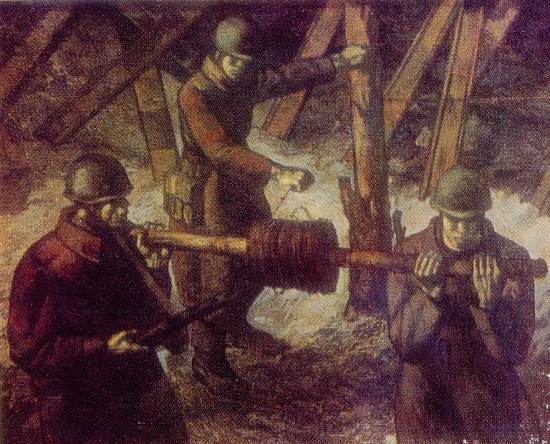 Soviet Latvian artist Karlis Dobrais
Born 24 February 1943 in the Sausnneja district of the Latvian SSR, in his childhood he attended Riga Art school of Rozental (1954—1961). And in 1970 he graduated from the State Academy of Arts of the Latvian SSR named after T. Zalkaln (the head of the thesis was E. F. Kalninsh).
The works of Karlis Dobrais attract the attention of spectators and art critics with an almost classical quality factor, a well-considered composition, every detail and every smear. Dobrais seemed to restrain the desire characteristic of any young and novice master to quickly find and approve his artistic self, more trust in the slow but steady organic growth process, collecting and accumulating creative forces.
In one of the first significant works of Dobrais – “Soldiers” (1967) – for all the dissimilarity of its stylistic manner to the almost sculptural pictorial language, which has become a kind of visiting card of the artist, the gravity and seriousness of the theme, clear logic of composition. 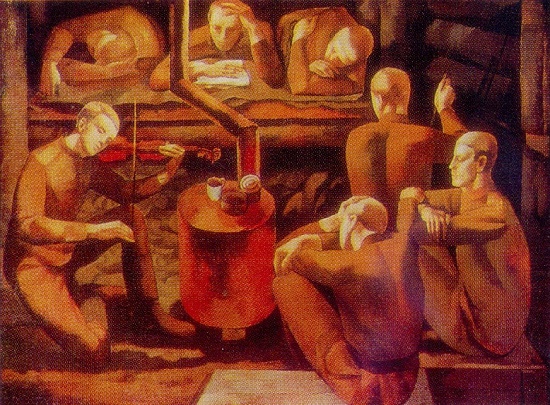 In his works, done in his student years, such as Palitra (1969) or Still Life with an Aircraft Model (1970), you clearly feel the desire to show and confirm at least the means of still life painting – this less narrative and recognized “Laboratory” genre – their individual experience of the subject, and consequently, of the world around them.

A significant event in the life of Dobrais, which became a kind of creative stimulus and gave him the opportunity, without giving up his former ideals, was his life and work in Daugavpils. In 1970, several graduates of the State Academy of Arts of the Latvian SSR, including Dobrais, used the opportunity to work in the newly created creative workshops in Daugavpils.

Moved to Daugavpils, young masters who belonged to the same artistic generation decided to work together. The goals common to all members of this group, which included not only easel painters, but also designers, sculptors, posters and arts and crafts masters, had a clearly expressed social and educational character. Young artists took over the organization of aesthetic education in the city, sought to raise the overall level of the art culture of the inhabitants of Daugavips, their interest in art.

From the second half of the 1970s, the most interesting line in Dobris’s artistic practice was still life, one of the most chambered and “private” after self-portraits of painting genres, where the master remains alone with his personal “thing” environment.

Still lifes of Dobrais are obviously staged, underlined. The artist does not seek to evoke in the viewer the impression of the peeped life of things, to create the illusion of naturalness, the life conditionality of the compositions composed by these things.

1977 – All-Union Art Exhibition “Young Guard”. The Life of the Country of Soviets, Moscow

A game. Portrait of students of the Art Institute of Repin. 1979. Oil on canvas. Directorate of exhibitions of the Union of Artists of the USSR

A group of Daugavpils artists’. 1974. Oil, canvas. Directorate of exhibitions of the Union of Artists of the USSR

Apples. 1969. Oil, canvas. Directorate of exhibitions of the Union of Artists of the USSR

At the old beekeeper’s. 1972. Oil on canvas. Art Fund of the Latvian SSR

Fragment. ‘A group of Daugavpils artists’. 1974

From the green bazaar of Alma-Ata. 1973. Oil on canvas. Daugavpils Local History and Art Museum

Hunters. 1973. Oil, canvas. Directorate of exhibitions of the Union of Artists of the USSR

Right part of the triptych ‘With large steps’. 1973

Central part of the triptych ‘With large steps’. 1973. Oil on canvas

With large steps. 1973. Oil on canvas. The left part of the triptych

Still life with a green bottle. 1979. Oil on canvas

Still life with a model of an aircraft. 1970. Oil on canvas. Art Fund of the Latvian SSR

Young soldiers. 1972. Oil on canvas. Ministry of culture of the Latvian SSR