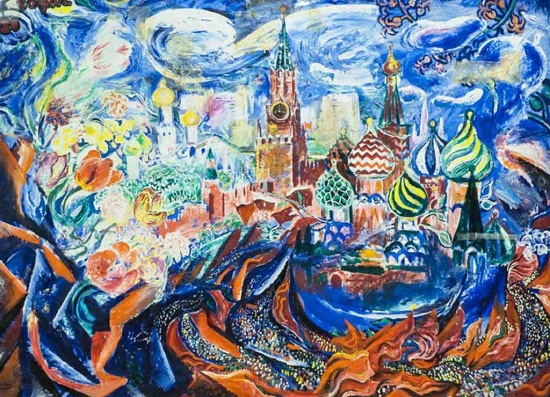 Works by the Soviet Azerbaijan artist Togrul Narimanbekov attracts us with a special sharpness, saturation, strength of color, and energy. Watching his pictures, we plunge into the tense world of emotional experiences, inner clashes, drama, into a world of full-blooded joy, temperament, a world of courage and fortitude. Cheerful and sad, pensive and happy, dancing and singing – Azerbaijan has found its reflection in the paintings of Narimanbekov.
Painting “Festival” (1980) – decorative and festive, built on the intense color rhythm, which comes back to the national traditions of Azerbaijani art.
Member of the Union of Artists of the USSR (1955), People’s Artist of Azerbaijan (1967) and People’s Artist of the USSR (1989), Narimanbekov lived and worked in Baku and Paris. He worked in the style of abstractionism and figurativism. First, he got his art education at the Azerbaijan Art School named after Azim Azimzade. Then, from 1950 to 1955 – at the Lithuanian Art Institute in Vilnius. Permanent participant of art exhibitions since 1952, his personal exhibitions took place in Baku (1961, 1965 and 1975), Moscow (1967 and 1972), Vilnius (1972), Volgograd (1973), and in Lvov (1975). In addition, he presented his paintings abroad – Prague (1965), Wroclaw, Warsaw and Sopot (1973). 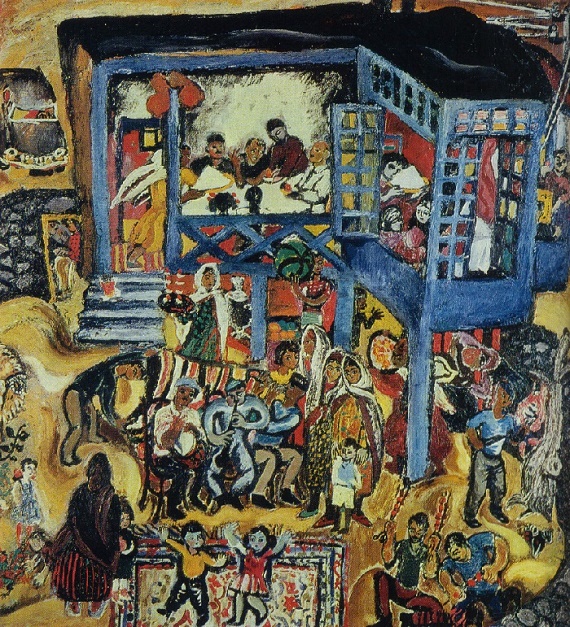 Hot at noon, cooling from the scorching heat in the evening, filled with a living history and today – this we see the capital of Azerbaijan in his paintings. All this is the homeland of the artist.
“Celebration in the village of Buzovny” (1968). The picture depicts dancing children, immediately next to cook a shish kebab, a man cuts the carcass of a ram, musicians play, in the second floor window there is a set table and sitting guests. The action takes place in the courtyard of a small village house. A holiday … But behind a long story there is another meaning. It is like an image of the whole Azerbaijani people, a synthetic picture of the whole life of the country.

People of creative work, poets, writers, artists, creators of Azerbaijan’s culture are subjects of Narimanbekov’s portrait. Externally simple and unpretentious, they are full of inspiration, desire and ability to create. The idea of ​​a full-blooded creative life, when a person gives his thoughts and feelings, finding an outlet for them. Or in the rhythms and sounds of music, or in the poetry of words composed in lines, or in the colors of painting, rediscovering to us the visible world of nature and the spiritual world of man.
“The Musicians” (1966). The faces, the thin hands of the musicians, the movements, the poses – everything speaks of their enthusiasm for their art. But the main thing is the transfer of the inner emotional tension of the heroes themselves. It is subject to a picturesque solution of the work. Very expressive combination of black shapes silhouettes, bright red carpet and restless blue background. The artist makes you feel the temperamental character of folk musical improvisation “mugham” while simultaneously revealing the atmosphere of emotional excitement.
The world of creativity for Narimanbekov is always pure, as the image of a girl holding a pomegranate is a symbol of life. 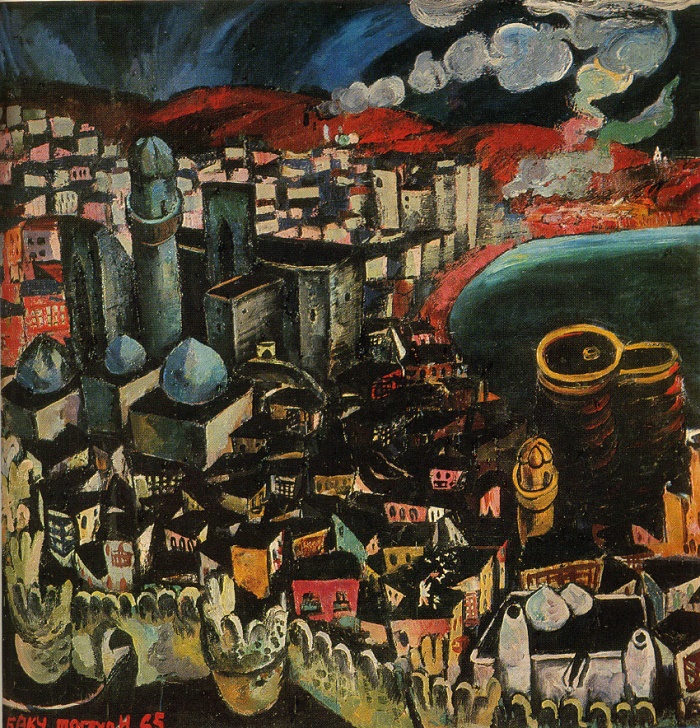 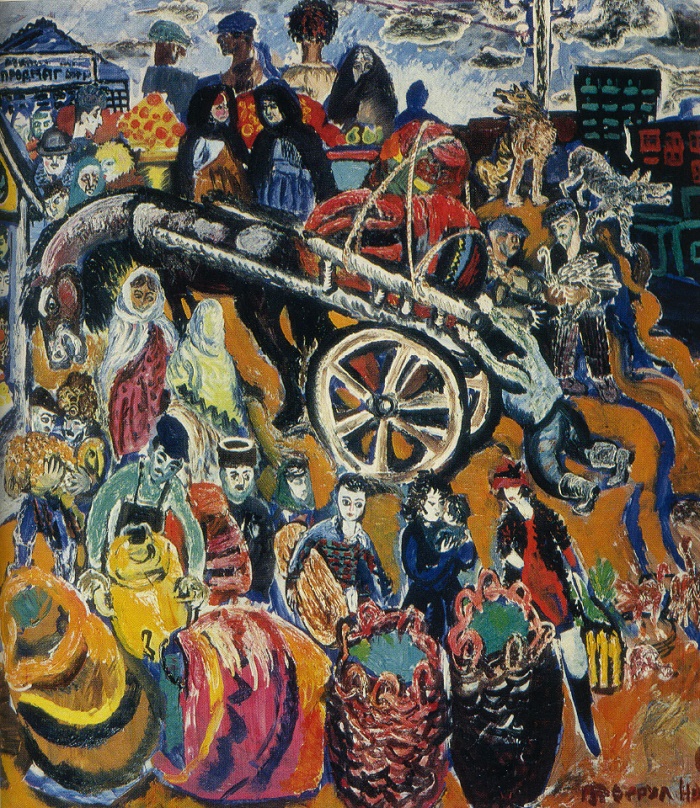 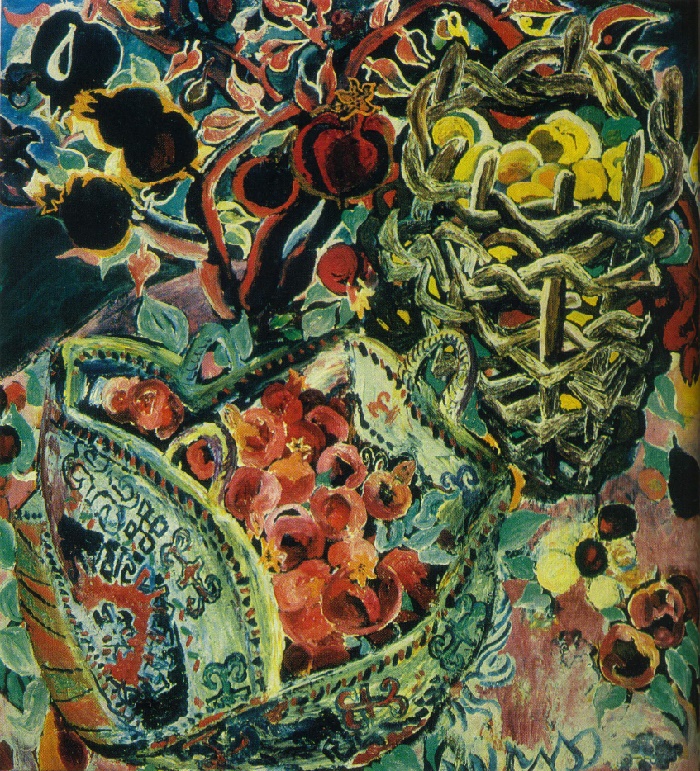 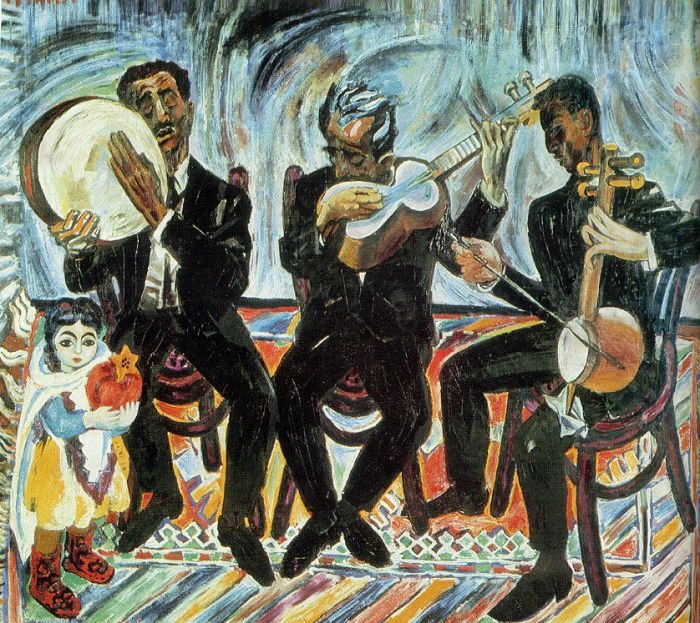 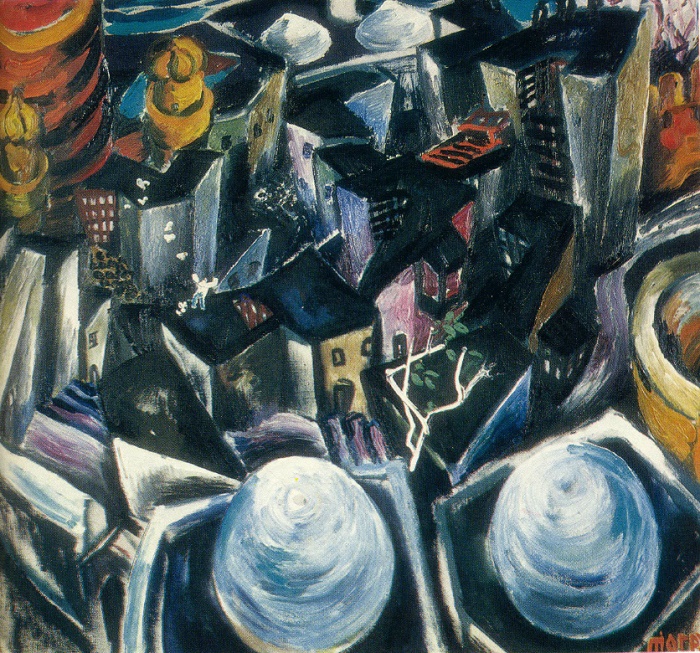 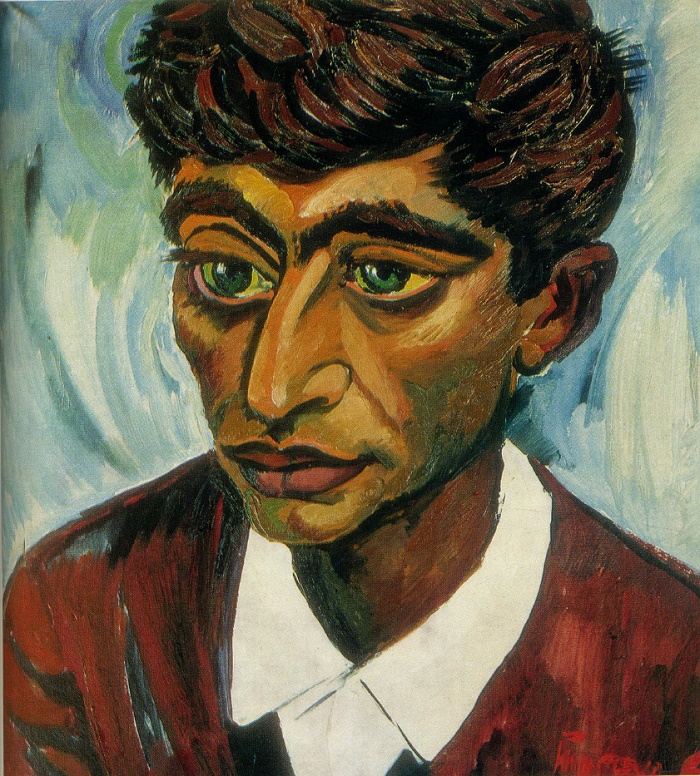 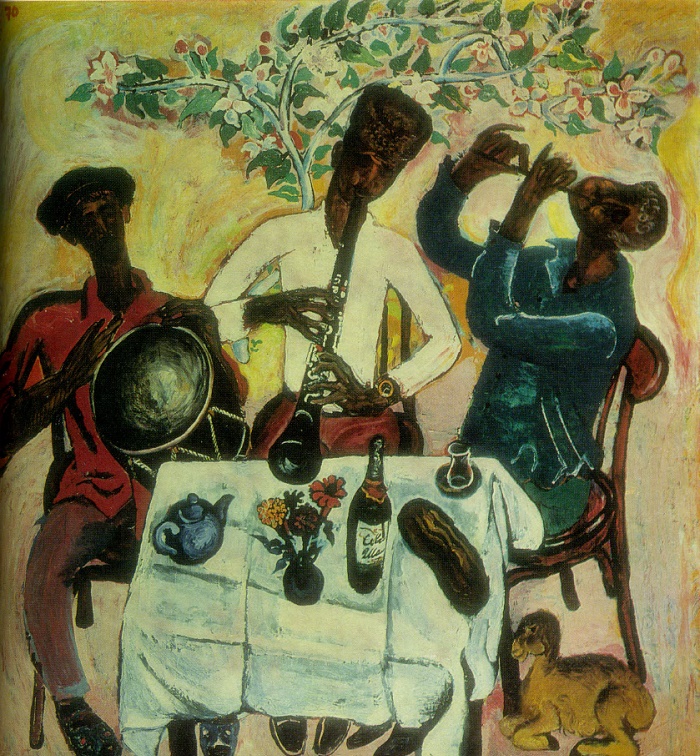 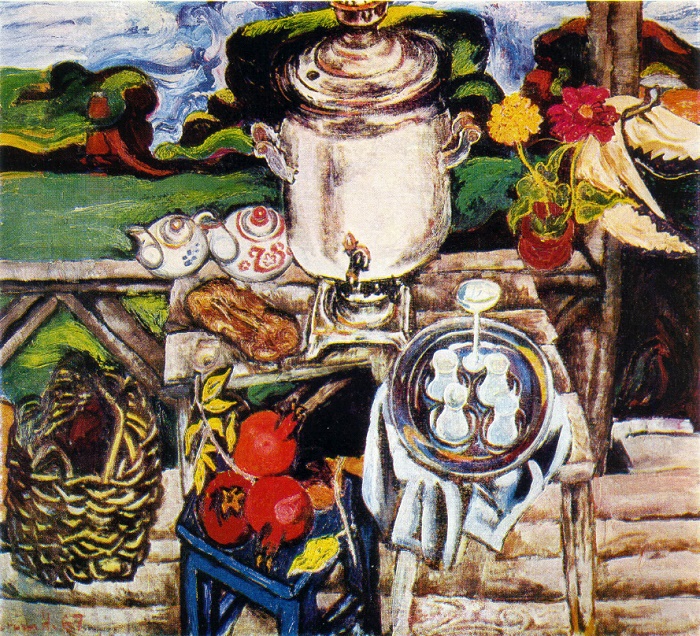 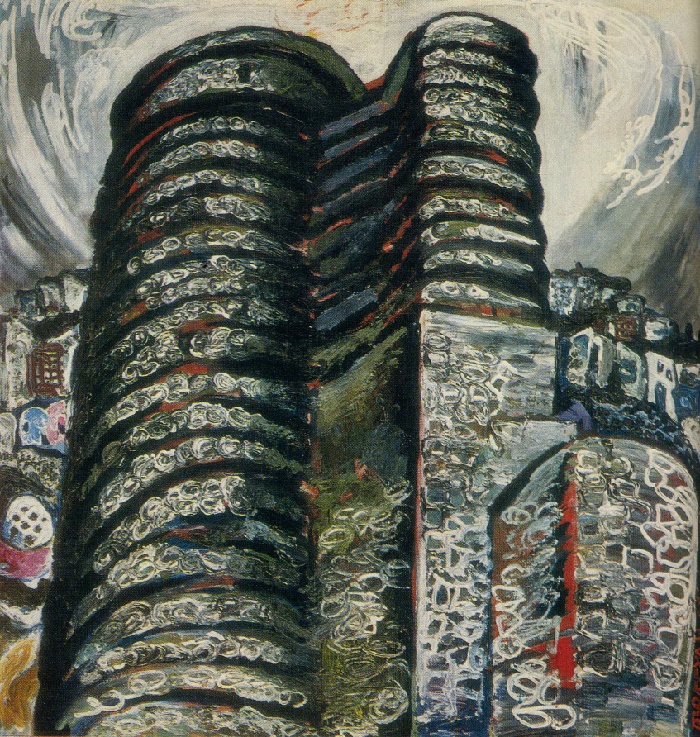 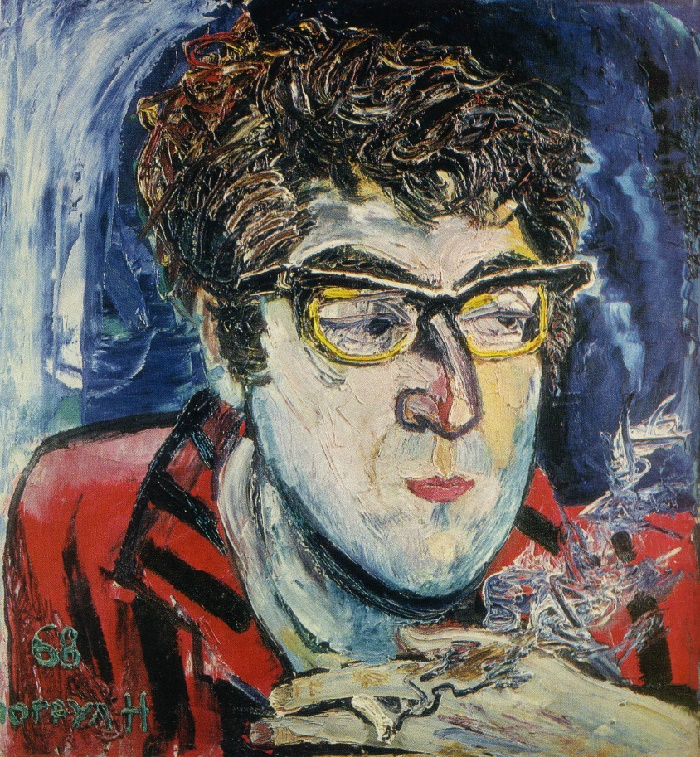 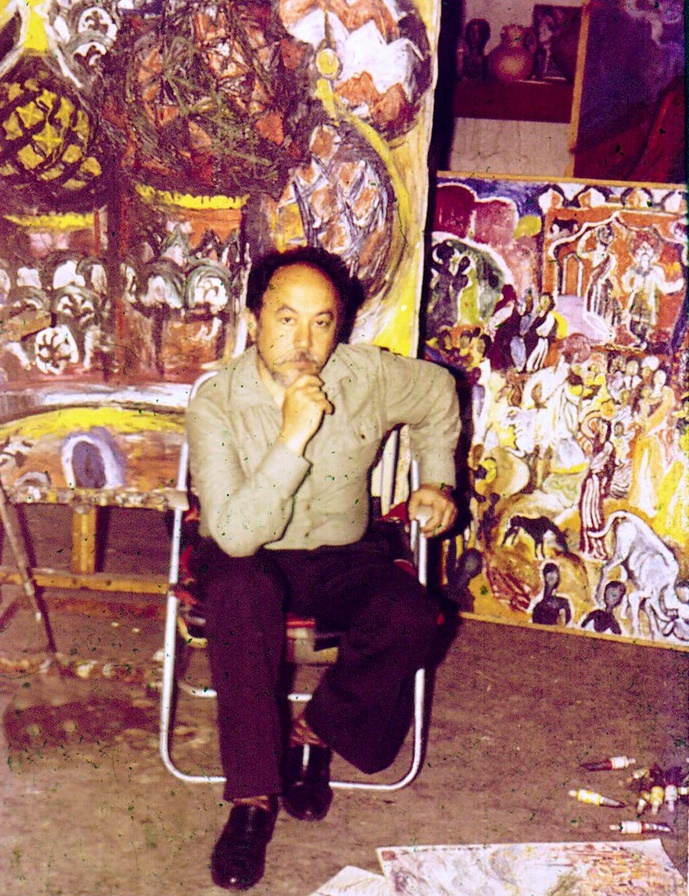 Togrul Narimanbekov, People’s Artist of the Azerbaijan SSR, in his workshop 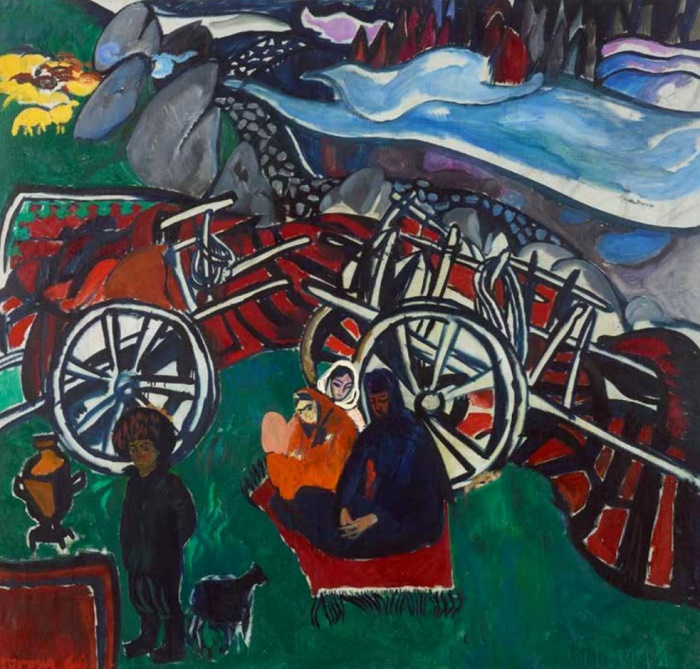