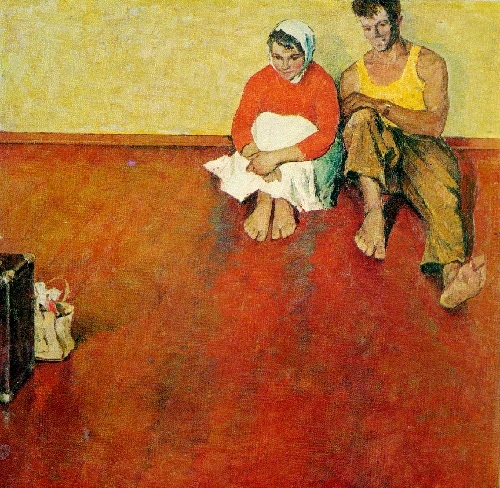 The passion for bright large canvases, life-affirming pathos, publicism are characteristic of the work of Mai Danzig. The artist perceives reality as if on a widescreen scale and speaks with the viewer in full force of voice and in full measure of emotions. Even the names of his paintings sounded exalted: “The Soligorsk land is rumbling”, “Belarus is the mother of the partisans” …
Danzig began with sketches, genre scenes and portraits. He painted the secluded corners of Minsk against the background of the sky with white clouds reminiscent of flying sails. He deployed on the canvases the prospects of squares and quarters with cranes, created a series of picturesque reports from the new buildings of the republic.
In the painting “New settlers” the artist clearly pretends to cause in the viewer complex associations. In the smiles and poses of his heroes, in the spaciousness of a freshly painted room, not cluttered with things of sustainable well-being, he seeks to express not so much the joy of a young family who has received a new apartment, but the bright and solemn feelings of the builders of a new life. 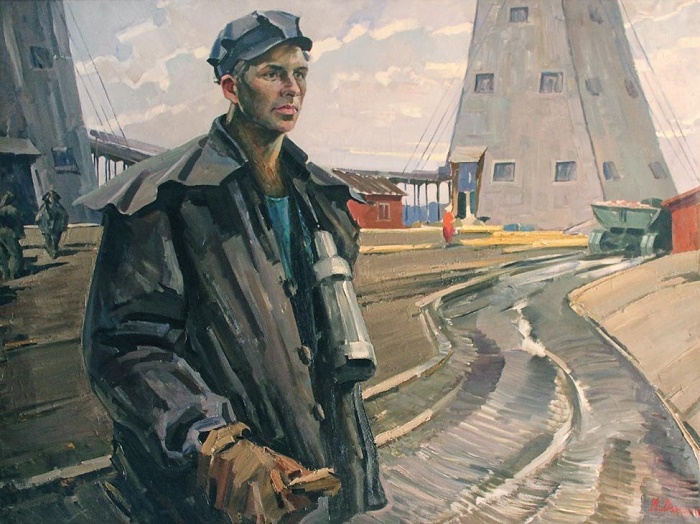 Soviet and Belarusian artist, professor, Mai Volfovich Danzig (April 27, 1930 – March 26, 2017) was a member of the USSR Union of Artists since 1960. He taught at the Belarusian State Academy of Arts, was the head of the department of painting. People’s Artist of Belarus (1995), awarded the Order of Francis Skaryna (2005)
Mai Volfovich Dantsig studied in the Minsk art college (1947-1952).

After graduating, he continued his study in the Moscow State Art institute named after V.I. Surikov (1952-1958). Since 1958 till last days he taught drawing and painting at the Belarusian State Theater and Art Institute. He first began exhibiting in 1958, and two years later became the member of the Union of artists of the USSR.

Traditionally, like many Soviet artists of the time, Dantsig traveled a lot around the country. In particular, his creative business trips (1960 – 1964) included the mines of Soligorsk, Polotsk Oilstation, Kazakhstan, the virgin lands, which resulted in a series of paintings about the new seven-year-old plan construction. In addition, there were also creative trips to Romania, Italy, and France (1962-1970).

Here will be a city

About the Great Patriotic War. 1968

Assistant to the operator of the Oil Industry Olga Kudrets. 1963

Creators, 1965 (the center of the triptych The Guardian of Peace)

Towards life. Diploma works of students of art colleges of the USSR. All-Union Exhibition of 1958

My city – old and new