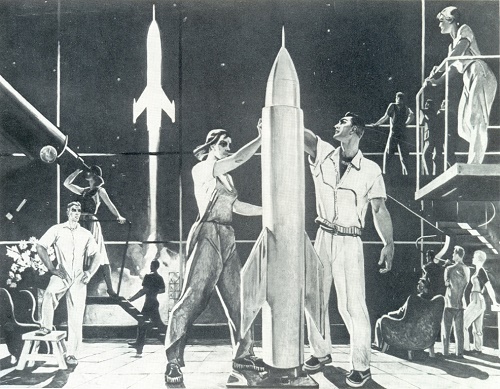 Soviet artist Alexander Deineka was born on May 8, 1899 in Kursk, in the family of a railroad worker. Even as a child, the boy displayed an interest in art and technology. He studied at the Kursk railway school and simultaneously at a small art studio. In 1915-1917 he received his art education at the Kharkov Art College. October events determined the fate of the painter – he is to become a singer of the revolution and a new life. While studying at the Higher Artistic and Technical Workshops (Vkhutemas), Deineka meets one of the most ambitious and iconic figures in the history of Soviet art – poet Mayakovsky. These meetings will have a huge impact on the artist. Figuratively, Deineka became Mayakovsky in painting. Both – the poet and the artist chose similar themes for their works, and their inspiration is the same – a sincere belief in the revolution and the Soviet power. And the love of the proletariat, the admiration of physical strength and physical health of a person. They both devoted much work to satire, advertising and propaganda posters, considering it their duty for society. Besides, one of the best paintings of Deineka received the same name as the famous poem of Mayakovsky – “Left March” (1941). 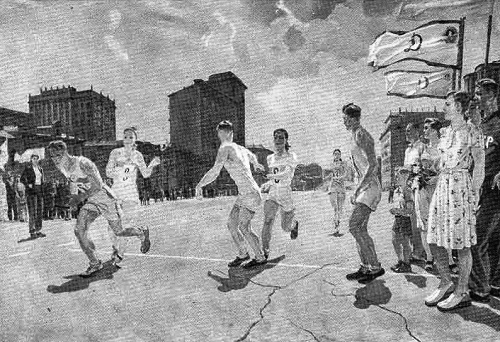 In 1918 Deineka works as a photographer, and becomes the head of Arts section. Besides, he is engaged in design of agitation trains, produces posters, and participates in theater productions. In 1919-1920 Alexander serves in the Red Army, and participates in the defense of his native Kursk from the white troops. In addition, he directs the art studio in Kursk, and travels to the front as a painter of propaganda theater.

After demobilization, Deineka went to Moscow, where he continued his artistic education the printing department of the Higher Artistic and Technical Workshops (Vkhutemas). His teachers were Ignaty Nivinsky and Vladimir Favorsky. After graduating from Vkhutemas, the artist went on a business trip to the Donbass miners.

OST
In 1924 Deineka takes part in the “First debatable exhibition of associations of active revolutionary art” in the “Group of Three”, together with two other young artists – Andrei Goncharov and Yuri Pimenov. The following year, the participants of the exhibition, along with other Vkhutemas graduates founded the “Society of Easel” (OST). And Deineka was one of the founding members. The painters of the new society decided to combine the latest European trends (notably expressionism) with the Soviet thematic, proclaimed “focus on young artists.” Like other members of the OST, many paintings of the early period of creativity of Deineka dedicated to the image “will of the XX century”, chanting peaceful Soviet reality. These are – Industrial production, industrialization, the life of the modern city and its citizens, and physical culture and sports (“In the Donbass”, 1925 “Before descending into the mine”, “On the construction of new plants,” “Skiers” 1926, and “Weavers”, 1927).

A new world, healthy and bright, clearly opposed the old one – sick, dirty world of the bourgeois and religious survivals. Restrained in color, graphically very rhythmic, “sniper” art – these are the features that characterize the early Deineka.

1932 is a milestone in the work of Alexander Deineka, and a new stage in the development of his art. His “Mother”, one of the most significant of his paintings, called the Soviet version of the Madonna. The Mother with a child in her arms has become a classic. In the 1930s, the artist’s works are brighten, soften in color, and portraits and landscapes filled with realism and romanticism. And there are many female characters. His works become lyrical, humane and at the same time, bolder, more individual.

A trip to Sevastopol in 1934 gives the artist the way to paint some new scenery. An important role in the works of Deineka played another trip – overseas. In 1935 the artist visited the United States, France and Italy. The result of this journey – a series of urban landscapes and portraits. Among them – “The Road to Mount Vernon,” “Philadelphia,” “Washington. Capitol”, “dancers in Harlem,” “New York”, “Paris. River Seine,” “Paris. in the cafe”, “Paris. Place de la Concorde”, “Parisian”, “Saint-Germain”, “Tuileries”, “Stadium in Rome”, “Square in Rome,” “Negro boy”, “Negro concert”, and “Boredom”.

In the late thirties the artist’s work is popular and recognized not only at home but also abroad. In 1937, the panel “Noble people of Land of the Soviets” brings him the gold medal of the Paris World Exhibition. And in 1939, the architectural design of the station “Mayakovskaya” (mosaics were reproduced in natural size in the multimedia installation “Metro-room”) takes the Grand Prix at the New York International Exhibition.

During the Great Patriotic War, in painting, as in life, peace themes recede into the background. In the first year of the war Deineka focused on frontal life of Moscow. The first significant work becomes “Outskirts of Moscow. November 1941” (1941). It is followed by a number of other urban landscapes of wartime (“Sverdlov Square in December 1941”, “Arena”, 1941).

Having visited destroyed Sevastopol, Deineka, very fond of the city, was shocked by the striking and tragic change. He had the idea to paint a battle scene, which becomes a hymn to the courage of the defenders. To collect the material, he even goes to the front line. When he returned, the artist combines his experience with the memories of the old pre-war city and creates the famous heroic painting” Defense of Sevastopol” (1942), a terrible and magnificent.

Even in a difficult wartime Deineka manages to paint a few pictures (some of which were initiated before June 1941) on the theme of peace (“Expanse”, “Portrait of Mirel Shaginyan,” 1944). The victory inspired him to a series of watercolors with views to the capture of Berlin (under the title “Berlin. 1945”), the image of the liberated spaces of his native land (“Kursk. Tuskor River”, 1945).

In the postwar period Deineka retains the same level of performance and skills, but goes back to the old, proven genres (peaceful working life, sports, spiritual and physical health of nature), almost ceases to push the boundaries of his creativity. However, over the next two decades, he still creates many masterpieces (“By the sea. Fisherwoman”, 1956, “Moscow’s military,” “In Sevastopol,” 1959), he continues to engage in the halls decoration. In 1954 he painted the auditorium of the Chelyabinsk Theater of Opera and Ballet; in 1956 creates mosaics for the foyer of the assembly hall of Moscow State University, in 1961 – for the lobby Congresses Palace in the Moscow Kremlin.

June 12, 1969 Alexander Deineka died in Moscow and was buried at Moscow’s Novodevichy Cemetery.

Stakhanovtsy. Sketch of mural ‘Noble people of the country of the Soviets’ for the World Exhibition in Paris. 1937

Talk of collective farm brigade. Sketch of mural for the new building of the People’s Commissariat of Agriculture. Fragment. 1934

The apples are ripe. Mosaic on the Mayakovskaya metro station. 1938. Detail

The sailor on watch. Mosaic on the Mayakovskaya metro station. 1938. Detail

Relay on the ring B. Fragment. Oil. 1947. The State Tretyakov Gallery

Before takeoff. Mosaic on the Novokuznetskaya metro station. 1940. Detail

On the construction of new plants. 1926 Oil on canvas. Tretyakov Gallery. Moscow

Girl with a basket. Mosaic on the Paveletskaya metro station. 1941. Detail

Girls at a blossoming tree. Sketch of stained glass window on the building of Moscow State University. 1953

Parade of youth. Mosaic on the Novokuznetskaya metro station. 1940. Detail

A statue. Mosaic on the Mayakovskaya metro station. 1938. Detail

At a construction site. Cranes. Mosaic on the Mayakovskaya metro station. 1938. Detail

Bombers at night. Mosaic on the Mayakovskaya metro station. 1938. Detail

Free fall of the parachuter. Mosaic on the Mayakovskaya metro station. 1938. Detail

Kremlin in the daytime. Mosaic on the Mayakovskaya metro station. 1938. Detail

Seagulls over the water. Mosaic on the Mayakovskaya metro station. 1938. Detail

Sketch of panel for Soviet pavilion at the World Exhibition in Paris. 1937. Detail

Sketch of panel for Soviet pavilion at the World Exhibition in Paris. 1937. Detail