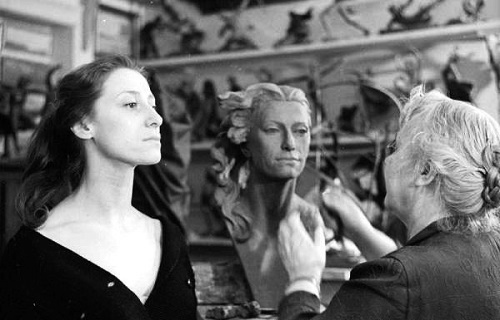 Elena Yanson-Manizer (1890-1971) – Soviet sculptor and artist, wife of Soviet sculptor Matvey Manizer. She worked in the style of miniature sculpture, portraits, monumental and decorative reliefs, medals, and easel composition. However, her favorite theme – the dance. She created a series (1934-1937) of the seven sculptures on the theme of the ballet “Swan Lake”, “The Fountain of Bakhchisarai”, “Romeo and Juliet”, “Egyptian Nights” and others.
She has created a series of figurines for the Leningrad Porcelain Factory (1950). Among them – “Giray sitting”, “Giray with a cloak”, “Zarema with the mirror”, “Zarema with dagger”, “Maria with a scarf,” and “Maria sitting.” Part of made in china figurines was later repeated in the iron. Besides, such sculptures as “Zarema – Kaminska ballerina”, “Maya Plisetskaya dancing Persian dance”, and “Spaniard with a Fan” were replicated with great success in late 1950s-1980s. 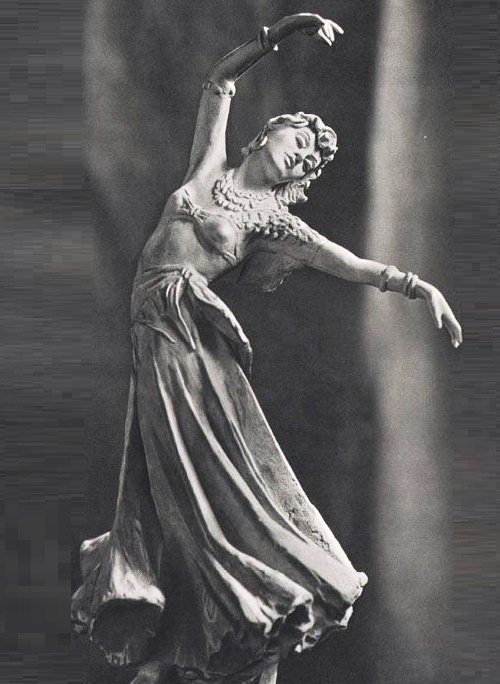 EA Manizer-Yanson was born January 17, 1890 in Peterhof. In 1911, after graduating from high school, she enrolled in private architectural courses of E. Bagaeva in St. Petersburg. And three years later, in 1914 she entered the Architecture Faculty of the St. Petersburg Polytechnic Institute. However, without finishing her studies she entered the architectural faculty of the free artistic and educational workshops of Petrograd government (1917-1921). In 1922 she continued improving her skills in the Higher Art and Technical Institute (VHUTEIN), Sculpture Department. She studied in the work shop of famous Soviet sculptor M. Manizer, and became his wife in 1926.

Elena Manizer created 16 bas-reliefs on the theme of multinational Soviet Union and the relief portrait of Stalin surrounded by banners at the metro station “Dobryninskaya” (1949).
She died September 21, 1971 and was buried at Novodevichy Cemetery, next to her husband.

Uzbek motif. The bas-reliefs on the metro Dobryninskaya

Sheep breeder. The bas-relief on the metro Dobryninskaya

Leningrad Porcelain Plant of MV Lomonosov. Ballerina Natalia Dudinskaya in Aurora in the ballet of Tchaikovsky

Fisherman. The bas-reliefs on the metro Dobryninskaya

Collective farmer. The bas-relief on the metro Dobryninskaya