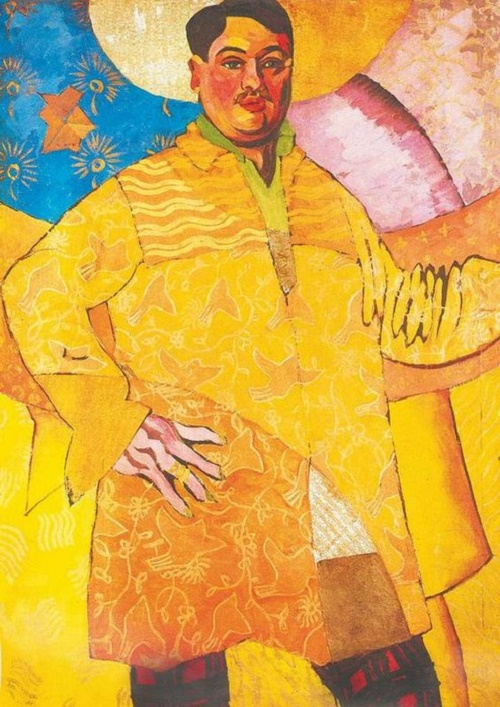 Soviet Russian avant-garde artist Aristarkh Lentulov (January 16, 1882 – April 15, 1943) – an outstanding painter and stage designer. Born in the village of Nizhny Lomovo, Penza province, in the family of a village priest. So, studying in the spiritual school and the theological seminary became a natural continuation of the family tradition. And, apparently, Lentulov would become a priest as well as his father. However, the gift given by God intervened in the fate of the young man. Beginning to draw from early childhood, along with his brother Boris, he entered the newly created art school of Seliverstov (1898). Noteworthy, Lentulov received the most elementary skills of the craft from his teachers – in Penza from the Wanderer Savitsky and illustrator Afanasyev. Besides, here, in Penza in 1908 was his first solo exhibition. Fifteen works of Lentulov, stored in the Penza gallery relating to different periods of his creative activity, allow us to clearly trace the evolution of the master. 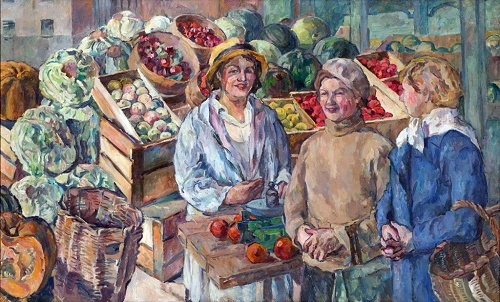 However, in 1906 Lentulov went to Petersburg to continue his education at the Academy of Fine Arts. But, unfortunately, the attempt was unsuccessful. Nevertheless, in St. Petersburg he trained his skills in the studio of D. Kardovsky. And, of course, constantly looked for his style, method, and technique, so to speak, the “angle of attack”. According to the type of nature and tempestuous temperament, everything he learned, he transferred onto his paintings. Absorbed everything quickly, he painted on canvas in his own way. Indeed, his unique handwriting is recognized everywhere.

Meanwhile, revolution of 1917 seized the artist not indifferent to the politics and destiny of his country. And, since the spring, he began to take a direct part in public life. In particular, was elected to the Presidium of the Council of Art Organizations of Moscow. It was under the impression of the February Revolution that he painted the canvas “The World. Celebration. Liberation”, which depicted a black man – a new Adam – surrounded by a fairy chicken Ryaba, carrying golden eggs, and the defeated double-headed eagle, a symbol of the monarchy.

He treated the paintings as symphonies in colors, in any case, he tried to create out of the sound. Scriabin, as you know, believed that there is a certain law of the correspondence of color and sound, and, one day, to test the theory in practice, he called several artists. After performing a fragment, he turned around and asked angrily and abruptly: “What color do you see?” “Blue!” “No, green!”. And he noted Lentulov as the person closest to the color and musical idea. Aristarkh Vasilievich was very impressed by this evening. The fact that a certain nature of music can evoke a certain color sensation, and that this feeling, in turn, can enhance the impact of music seemed indisputable. By the way, Lentulov had a good voice, and was not shy to sing a duet with Shalyapin and, working, often sang arias from Boris Godunov.

Noteworthy, Lentulov sincerely wanted to understand and see the new. “I decided to go on a business trip,” he writes in the article “Meeting with Industry” (November 2, 1935), – a new unexpected cardboard appeared to my eyes. On the very first day, I eagerly attacked the work … The largest cities, collective farms, state farms, new industrial centers – they were endless. Truly a lot of themes for a modern Soviet artist.”

In fact, today Lentulov is one of the most expensive Russian avant-gardists in the art market. The artist’s works are in the Tretyakov Gallery, the State Russian Museum in St. Petersburg and in private collections around the world. For example, in 2007, his painting “The City in Southern Russia” was auctioned off at Sotheby’s for 1.7 million pounds sterling.

Night at the Patriarch’s Ponds

Night on Bronnaya. The Moscow landscape. 1927

Portrait (Woman with a guitar). 1913. Oil on canvas. State Museum of Fine Arts of the Republic of Tatarstan, Kazan

Portrait of an Unknown Woman in a Blue Dress, 1916

Woman with the Harmonica, 1913