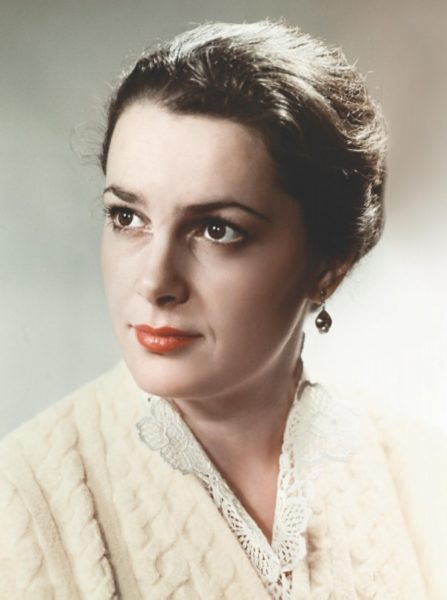 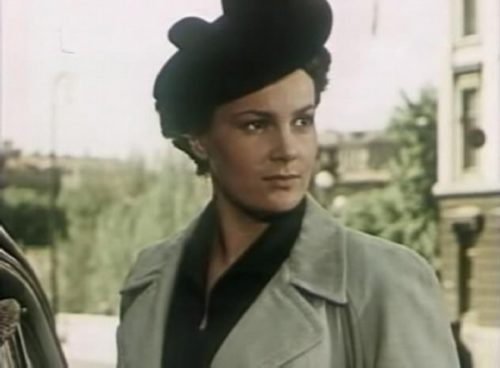 Elina Bystritskaya was born on April 4, 1928 in Kiev. Her father Abraham Bystritsky was a military infectious disease doctor, captain of the medical service. The mother of the future actress Esfir Bystritskaya worked at the school. She named her daughter Ellina after the heroine of the play “At the Gates of the Kingdom” by the Norwegian playwright Knut Hamsun. However, the passport officer made a mistake and wrote down the name with one letter “l”. 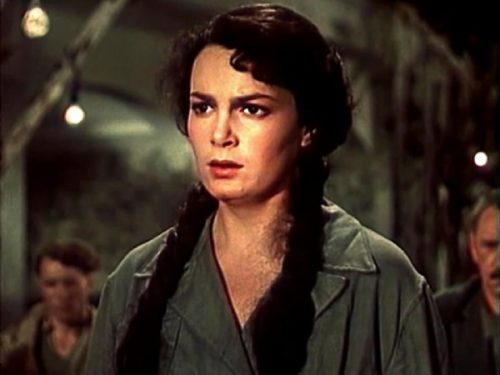 Elina Bystritskaya in the movie Volunteers 1958

In 1941, Bystritskaya’s father was assigned to the sanitary and epidemiological station in the city of Nizhyn. For the summer holidays, a family came to him from Kiev. After the outbreak of the war, Abraham Bystritsky worked in a field hospital, which was created in Nizhyn at the end of June. Elina Bystritskaya signed up there as a volunteer. She looked after the wounded she read newspapers to them, delivered mail, wrote letters under dictation.

After the war, Bystritskaya was awarded the Order of the Patriotic War II degree, the medal “For Valiant Labor in the Great Patriotic War of 1941-1945.” 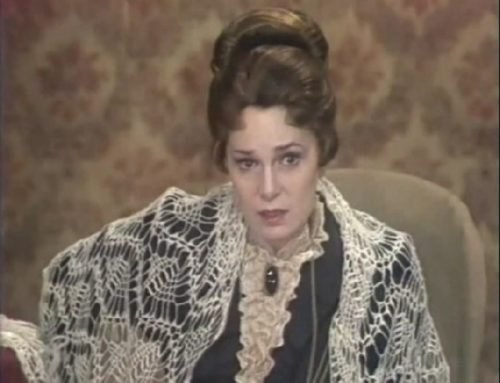 In 1948, Elina Bystritskaya played in her first performance a production of “Marusya Boguslavka” by the Nizhyn Music and Drama Theater. For the role of a servant in the Sultan’s harem, she learned and performed an oriental dance.

At the institute, Bystritskaya created and headed a dance club. At the competition of creative teams in 1948, her group won first place. For the victory, the artist was awarded a ticket to a rest home. There Bystritskaya participated in amateur performances. In one of the amateur performances, the artist of the Kiev State Theater Natalia Gebdovskaya advised her to enter the Kiev Institute of Theater Arts (now the Kiev National University of Theater, Film and Television).

In the same year, Elina Bystritskaya took the documents from the Faculty of Philology and went to Kiev. 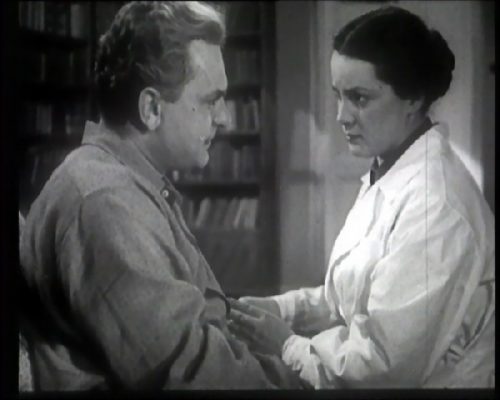 In the movie, Elina Bystritskaya began acting in her student years. For the first time she appeared on the screen in episodes in the films “In Peaceful Days” and “Taras Shevchenko”.

The following year, Bystritskaya landed her first major film role. She was offered to play the local doctor Elizaveta Muromtseva in Friedrich Ermler’s film “The Unfinished Tale”. Bystritskaya agreed she recalled that she wanted to play the role of a doctor, because she herself worked in a military hospital during the war. 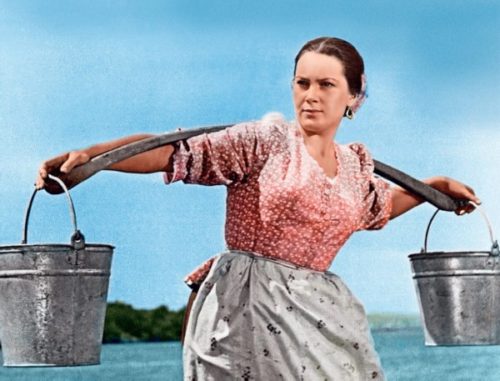 The premiere of “An Unfinished Tale” took place in October 1955. It was watched by about 30 million people. According to a survey of readers of the newspaper “Soviet Culture” Elina Bystritskaya was recognized as the best actress of the year. The Unfinished Tale was also shown abroad. Foreign critics wrote about the “piercing” game of Bystritskaya and called her “Russian Gina Lollobrigida”. 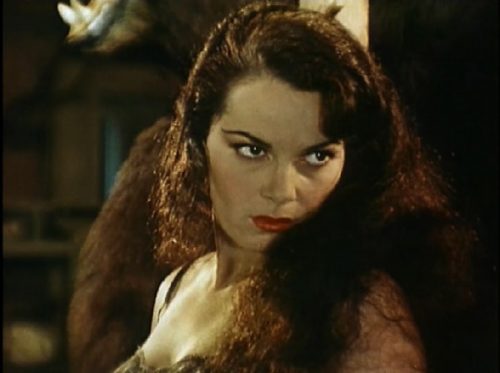 The premiere of The Quiet Flows the Don took place in 1958.

The film became popular: 47 million viewers watched it at the box office. At the All-Union Film Festival of the USSR, the picture received four prizes: the first prize, the prize for best director, camera work and the main male role. The tape was also noted at foreign competitions. At the Karlovy Vary Film Festival, the film by Sergei Gerasimov was awarded the Crystal Globe. And the Directors Guild of the United States recognized “Quiet Flows the Flows the Don” as the best foreign film.

Elina Bystritskaya starred in another film the film “Volunteers” about the fate of the Komsomol members of the 1930s. 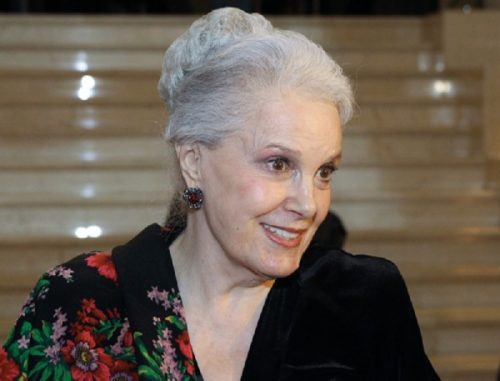 In the 1960s, Bystritskaya played in five films, including “Russian Souvenir” and “Everything Remains to People.” In 1966, “for services in the field of Soviet cinema” she was awarded the title of People’s Artist of the RSFSR.

In 1967, Elina Bystritskaya starred in Semyon Tumanov’s biographical film Nikolai Bauman. For the next 23 years, the actress did not act in films. She believed that all the roles that she was offered were not serious. She started acting again in films only in the 1990s. 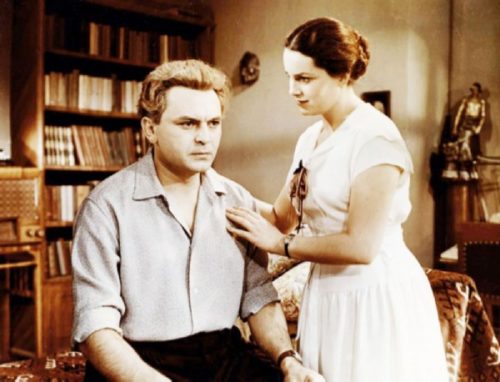 Actress of the Maly Theater

Elina Bystritskaya made her debut at the Maly Theater in 1958 in the production of Lady Windermere’s Fan. Initially, the actress wanted to play Mrs. Erlynne in the play. However, director Viktor Komissarzhevsky believed that Bystritskaya was too young for the role. Instead, the actress played the main role Lady Windermere. Five years later, she still played the role of Mrs. Erlynne in this performance.

In 1962, Bystritskaya played the role of Baroness Shtral in the production of the drama “Masquerade” by Mikhail Lermontov. The performance was attended by the composer Igor Stravinsky, who came to the USSR from the USA that year.

Bystritskaya served at the Maly Theater for more than 50 years. She played in 30 performances, including “A long day goes into the night”, “Woe from Wit” and “Spring Love”. 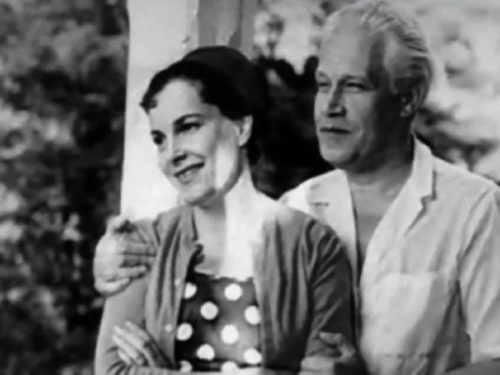 Elina Bystritskaya was married once. Her husband was an employee of the Ministry of Foreign Trade of the USSR Nikolai Kuzminsky. The actress met him in 1958 while visiting mutual friends.

Nikolai Kuzminsky proposed to Bystritskaya four days after they met. The actress agreed, and in the same month they got married. Kuzminsky and Bystritskaya lived together for 27 years. However, they divorced in 1985.

Bystritskaya was fond of sports. The artist was often invited to the training camps of Soviet teams. She helped the athletes prepare for the performance set them up and encouraged them. Rhythmic gymnastics coaches believed that Bystritskaya brought good luck to their team. At their request, in 1975, the artist was appointed president of the USSR Rhythmic Gymnastics Federation. She held this position until 1992. 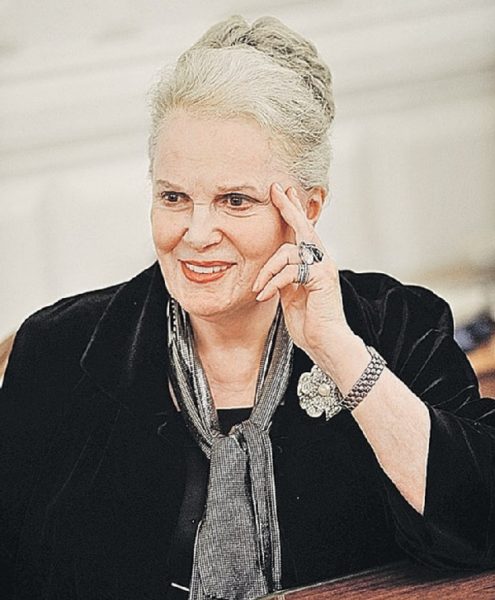 In the 2000s, Bystritskaya traveled to Russian cities with concerts. On them, the actress read poems, sang Russian folk songs and romances.

In the 2010s, she worked on her autobiographical books Encounters Under the Star of Hope and Stars in the Sky, which were released in 2017. In the preface to one of them, the artist wrote: “I did not seek to write my autobiography. This book contains only fragments, “pieces” of my fate, a story about memorable events and people dear to me.

Elina Bystritskaya died on April 26, 2019. Farewell to the actress took place at the Maly Theater, and she was buried at the Novodevichy Cemetery in Moscow. 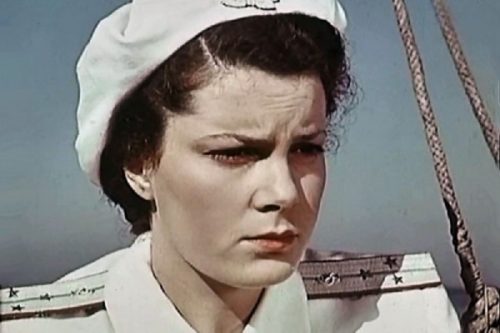 in the movie Days of Peace 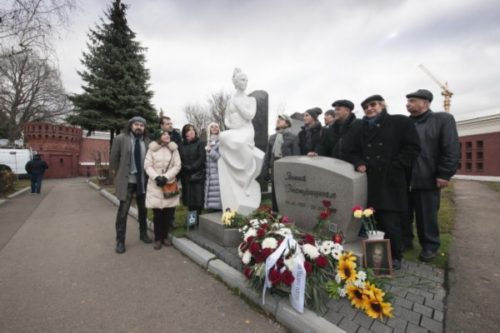