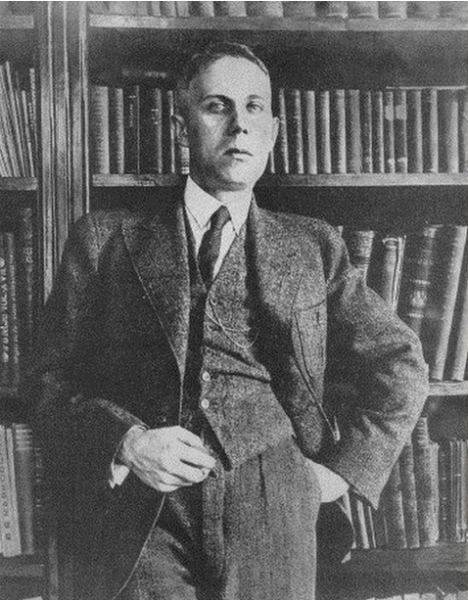 Anatoly Galaktionovich Petritsky is a master of the Ukrainian avant-garde.

Anatoly Galaktionovich Petritsky (1895-1964) Russian, Ukrainian and Soviet painter, graphic artist, theater artist and teacher. Graduated from the Kiev Art School (1918). Studied at the Moscow VKHUTEMAS (1922-1924) with the avant-garde artists A.D. Drevin and N.A. Udaltsova. As a theater artist (since 1914) he was influenced by stylistic tendencies and constructivism. Author of easel paintings, including a series of portraits of Ukrainian writers, as well as posters and illustrations. Twice laureate of the Stalin Prize of the USSR in 1949 and 1951, People’s Artist of the USSR (1944). Academician of the USSR Academy of Arts (1947). 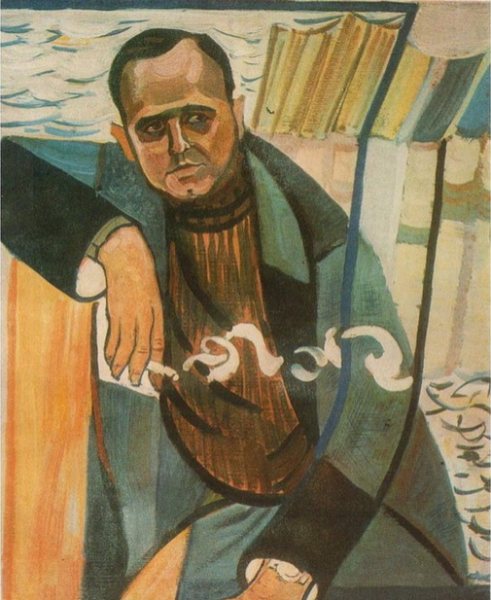 Anatoly Galaktionovich Petritsky was born on January 31 1895 in Kiev, in the Russian Empire, into the family of a railroad employee. In 1910-1918. studied at the Kiev Art School under G.K. Dyadchenko, F.G. Krichevsky, V.K. Menka and from 1913, in parallel with his studies at the school, attended A.A. Murashko in the “Ginzburg House”. In 1915-1916. under the direction of the artist V.G. Krichevsky and art critic D.I. Shcherbakovsky studied Ukrainian folk art. Since 1914 he regularly took part in Ukrainian and Russian exhibitions. In 1916 he made his theater debut as a stage designer. 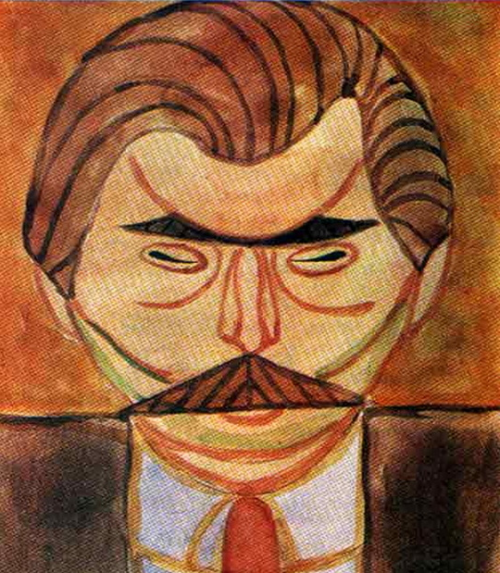 Portrait of the artist Vasily Krichevsky

In 1918, he briefly attended the workshop of monumental painting of M.L. Boychuk at the Ukrainian Academy of Arts in Kiev. He made murals and decorated streets for the revolutionary holidays. He was influenced by Alexandra Exter and worked for some time in her studio. In 1919-1921. worked in the “Young Theater” Les Kurbas. He was a member of the literary associations “White Studio” (1918) and “Flamingo” (1919).

In the early 1920s, Petritsky moved to Moscow. In 1922, together with the choreographer K.Ya. Goleizovsky worked on a production of Eccentric Dances to his music at the Moscow Chamber Ballet. From 1922 to 1924, Petritsky studied at the Faculty of Painting in Moscow in the center of Russian constructivism, at VKHUTEMAS under the guidance of teachers of avant-garde artists A.D. Drevin and N.A. Udaltsova. The time of study and the first decade of A.G. Petritsky fell on the end of the post-revolutionary era of freedom of creativity, when the fate of an artist was determined by the measure of his talent, the scale of his personality and his aesthetic preferences. At this time, Petritsky painted abstract paintings and made constructive reliefs. 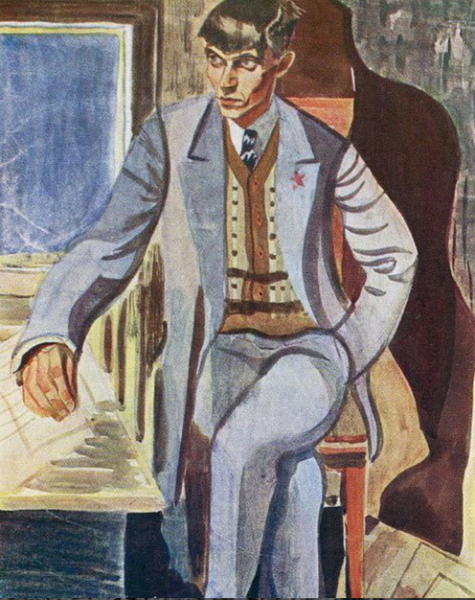 In 1924, in Moscow, at the VKHUTEMAS, Petritsky will write his thesis the painting “Invalids”, which will bring him worldwide fame. He will devote it to the crimes of the First World War, but undoubtedly there is also a dark childhood experience in it. The canvas depicts a family, each of whose members are victims of the war crippled men, a little girl and an old woman, who remains the only support for everyone. Monolithic, like a relief, the characters are presented close to the viewer, as if they do not fit into the framework of the canvas. No everyday details, only faces that do not look at the viewer, bare feet and a barely noticeable gesture the son’s hand, palm up, asking for alms.

In 1930, Invalides were selected to participate in the 17th Venice Biennale. The success of the work was enormous, the foreign press wrote about her, and after Venice she traveled all over Europe and America: Berlin, Bern, Geneva, Zurich and New York. Collectors have repeatedly tried to buy the canvas, but Petritsky believed that the work should return to its homeland. In the end, this is what happened, but only for a three-year absence, ideological changes began in the Soviet state with the introduction of the only correct artistic method socialist realism. Consequently, from a valuable work of art, the work turned into material evidence in the fight against the formalism prohibited at that time. 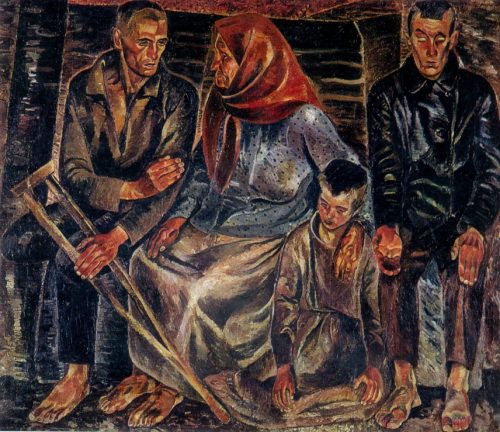 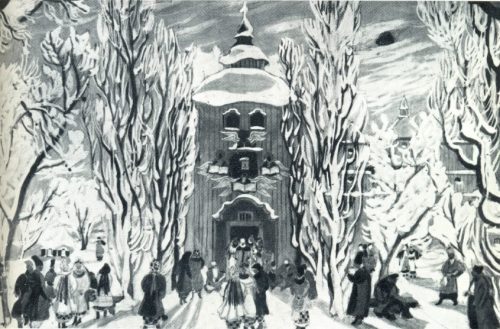 A sketch of scenery for Tchaikovsky’s opera ‘Cherevichki’. Watercolor. Branch of the Bolshoi Theater of the USSR. Moscow. 1941

In the late 1920s early 1930s. Over the years, Petritsky’s work was very multifaceted.

He works as an easel painter in painting and graphics, as a set designer, illustrator and poster artist. The works of this period are executed in the style of the Russian avant-garde of that time.

Since the late 1920s, he created more than 100-150 portraits of his friends, colleagues and representatives of the creative intelligentsia writers and poets Ivan Dneprovsky, Pavel Usenko, Tadeusz Doleng-Mostovich, Pavel Tychina, director Vasil Vasilko, director Les Kurbas and others. the artist tried to reflect not just facial features, but also the character of each person. 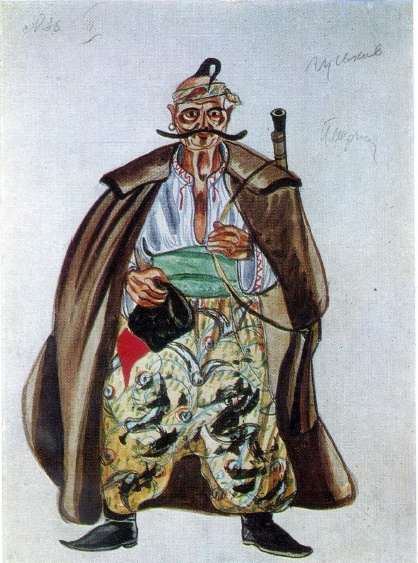 Sketch of a costume for the opera by N.V. Lysenko ‘Taras Bulba’. Watercolor, Gouache. The Opera and Ballet Theater named after Shevchenko. Kiev. 1937

For example, Pavlo Usenko is depicted sitting near a writing table; his gaze is directed to the side. The right hand is on the table, the left is hidden in a pocket. The one on the table is much longer and more powerful than the one hidden in the pocket: the hand of the master.

In portraits, proceeding from the analysis of the model’s form, the artist creates a picture space of stylized transformations of this form, receiving a laconic and expressive image. This method was used to create most of the famous series of portraits of the artist’s contemporaries: public figures, writers, artists and actors, many of whom were later repressed, but the portraits were partially preserved.

Anatol Petrytsky is one of the few Ukrainian artists who survived the repressions of 1937 and did not fall into the Executed Generation. But like the heroes of his portraits, Petritsky’s paintings faced a difficult fate: only 20 of them remained in museums or settled in private collections. It is still unknown what happened to the others