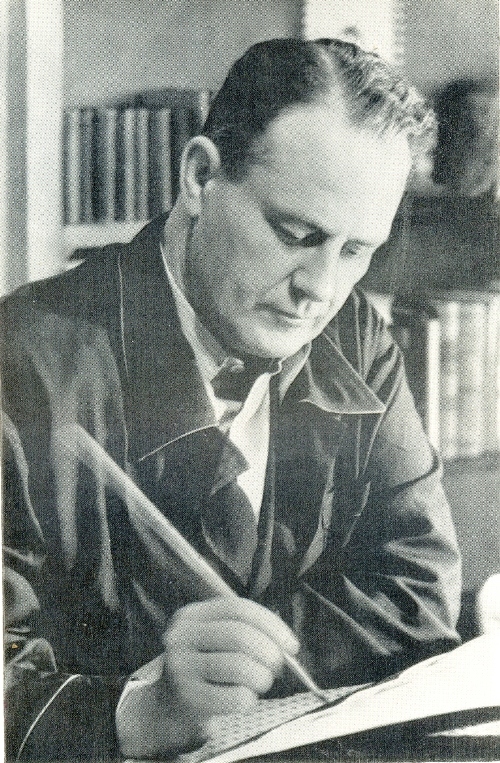 Soviet Set Designer Boris Knoblok (April 19, 1903, Moscow – February 4, 1984, Moscow) – Honored Artist of the RSFSR, the winner of the Stalin and the State Prize of the Tatar ASSR. Boris Georgievich Knoblok belonged to a generation of artists who came to the theater decorative art from painting, architecture, graphic. They mastered a new profession, putting their first performances. Many could not withstand the theater test. Knoblok survived, stayed there forever. He perfectly mastered the traditional space of the stage, drama and music, willingly designed there the performances of contrasting genres. But if within the “scene – the box” was not enough for him, and he was constantly looking for the application of his abilities in the circus, cinema and sports. 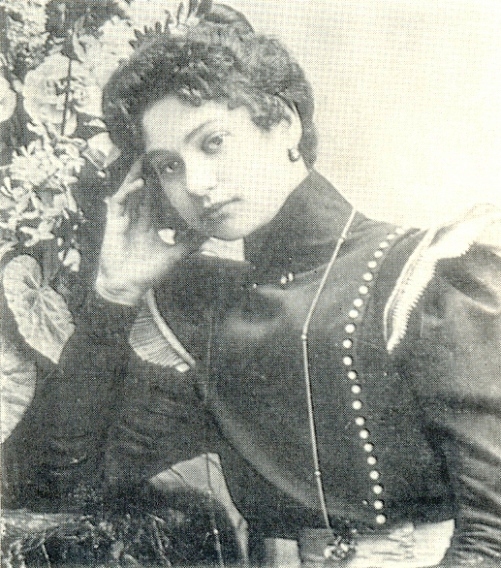 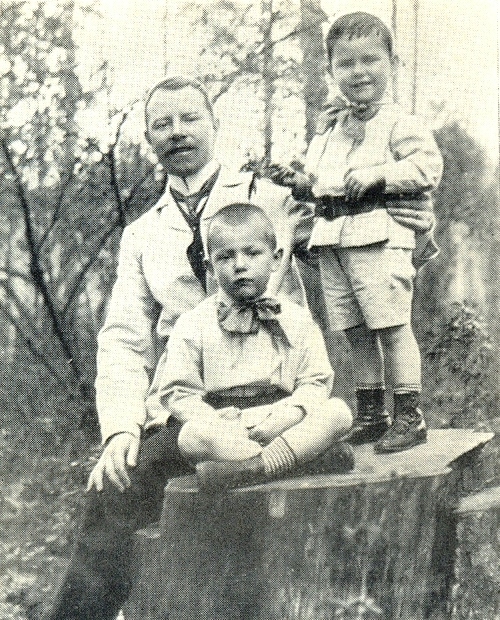 The reason for that was his childhood impressions: a meeting with Nikolai Okhlopkov in realistic theater. Path of theater artist Boris Knoblok began with “out-stage” scenery, as it was called at the beginning of the 30s of the last century, with the creation of non-traditional space in the plays “Aristocrats”, “Othello”, “Colas Breugnon”. The principles established there were extremely important for the artist’s lifetime. As well as the commitment to the genre of folk festivals, mass entertainment. 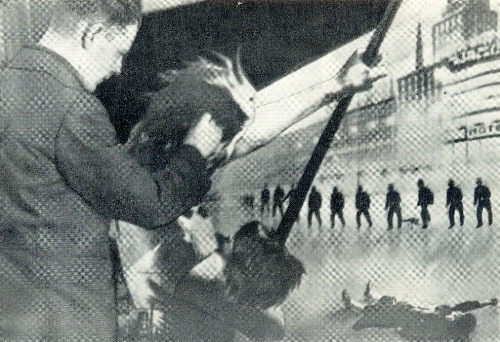 Soviet Set Designer Boris Knoblok led work in the field of mass entertainment until the last years of his life and was tireless in fiction, witty imaginative solutions in so different shows, such as water festival on the Dnieper or a gala concert at the Paris Palais des Sports. And yet he was a man of the theater. Not only one of the acknowledged masters of the Soviet stage design, not only an artist directing the warehouse, the share of which is great in the creation of stage design, but a man who deeply understood actor, loved the theater daily, was able to come up with and implement of new technological solutions, working with stage workshops. 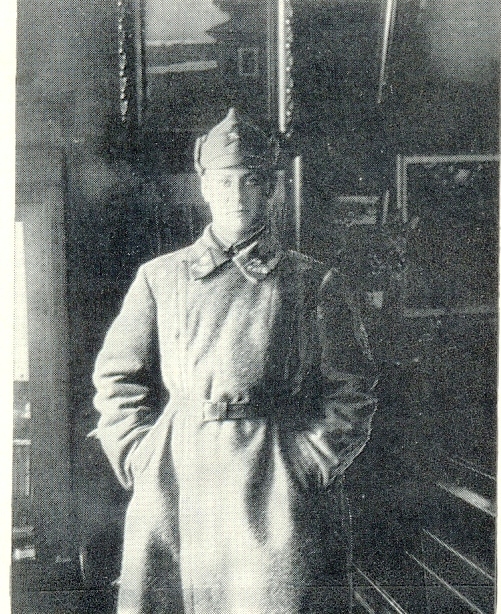 Being over half a century, an active participant in the theatrical process, Soviet Set Designer Boris Knoblok was at the same time a talented and retentive observer: his portraits of directors, actors, theater critics, whom he knew, say not only about the psychological insight of the author, but also that he knew how to enjoy human talent in a variety of its manifestations. 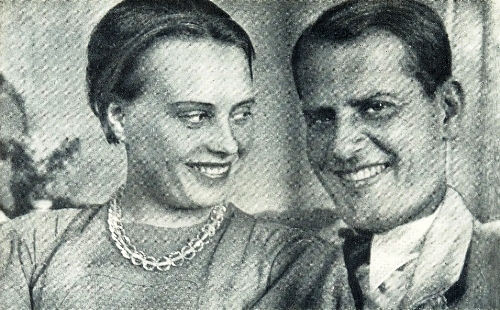 He was interested in venturing public affairs, to be on the people to gather around him comrades and young people. Therefore, probably, he headed the council for theatrical and decorative art at the All-Russian Theatrical Society for about thirty years. Stately, elegant, correct, he brought with him a sense of the significance of the holiday. Even in recent years, when a long and serious illness increasingly tormented him. Because he was a man of the theater. And most importantly that the artist was nourished not only by theater, but life. 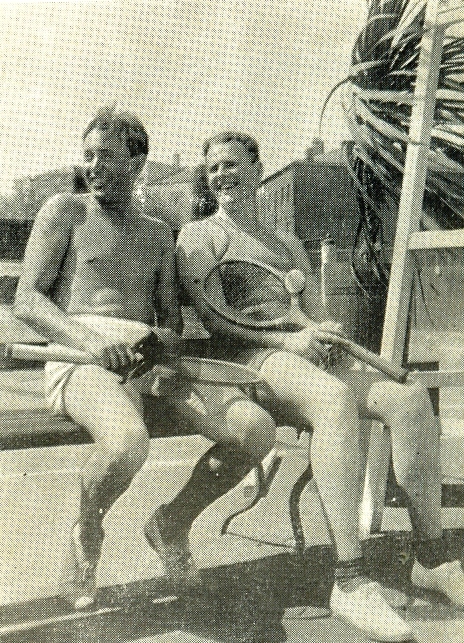 Boris Knoblok and P.P. Arzhanov at a tennis court. 1930s

From the book – an autobiography of Boris Knoblok:

My great-grandfather on my mother’s side, Afanasy Medvedev, the brother of famed actress of Maly Theatre N. M. Medvedeva, was a native Muscovite and served at the Imperial Bolshoi Theatre all his life. Starting at a young age his service in the gallery, he was gradually rising in salary and position. All his children were brought up in the drama school at the theater. His daughter – my grandmother, Elizaveta Afanasyevna Medvedeva, at the end of the school was accepted into the troupe of the Bolshoi Theater and danced on the big stage at the position of the soloist of ballet. Her sisters married, one to the an artist of the Imperial Theatres Kukanov, who designed the scenery for both Big and Small Stage, and the other – for the doctor of Bolshoi Theatre Klyuyev. Both sons – Ivan and Peter Afanasievich – worked as decorators – artists under the guidance of their uncle Kukanov in the Bolshoi Theatre workshops. 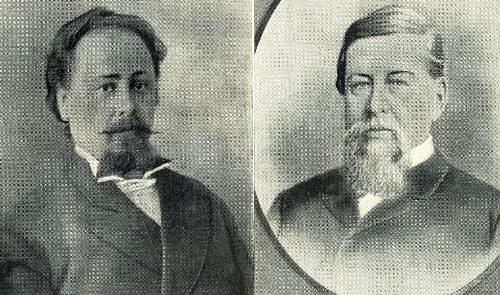 “That grandmother was a dancer, I knew for a long time, but about my great-grandfather, I learned only on the first day of the visit to the Bolshoi Theatre – a performance for children, when I was seven years old. They gave the opera “Life for the Tsar”. The strongest shock was all this auspicious day. Dazzling light, shine of crystal chandeliers, gold of grand hall, the curtain with a flying winged chariot, first seen a huge scene with its magical life where everyone sings and dances. This stunned me. I knew that my grandmother here danced the mazurka. I knew that this was the mazurka that struck the heart of the grandfather. It was after this mazurka, he sought a meeting with her and later married”. 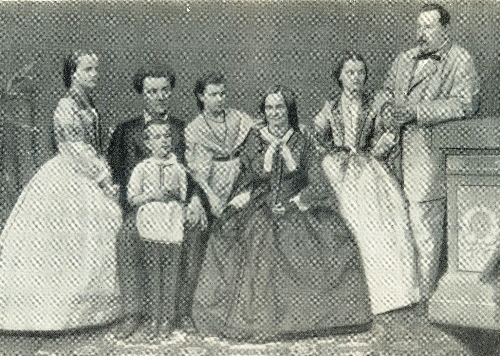 “As for the male line ancestry of my mother, the only thing I know for certain is that her grandfather (and my great-grandfather) Adolf Simes, in the middle of the last century left England and moved with his young sons – Heinrich-Otto (mom’s father, my grandfather) and Fedor – to the city of Hamburg. The reason for the relocation was the sudden death of his wife. He couldn’t see the native place, the loss of a loved one has become unbearable to him.

In Hamburg, some time later, he remarried. However, in the middle of the last century, in search of fortune, left his young wife and sons and went to Russia. Russia built railways, factories and foreign specialists – from engineers to skilled workers were welcomed. Having obtained a settled way of life, the great-grandfather took two sons and his wife (her name was Augustine Christianovna) from Hamburg. Shortly after the family moved to Moscow, my grandfather died, and Augustine Christianovna, though she was a beauty, didn’t marry again and devoted herself entirely to the care of foster children, and later grandchildren”.

I love our massive national holidays. This is my way to the present, legitimate and natural satisfaction of my need for intimacy with life, era, in an effort to express it in art.

More than half a century ago, when a group of artists-designers was sent to the district committees, factory councils and clubs for creating designs for demonstrations and festive performances, of course, I had no idea about the nature and history of this genre. However, this kind of creativity I always somehow liked. The element of cheeky street art, free and mischievous, always fascinated me. The element of carnival, violently grotesque lived in those years, born of revolution, cherished by Mayakovsky. Spirit of competition and ingenuity lived in the artists, and the demonstrators themselves. This atmosphere was wonderful card for work, and even better was the friendship tying sometimes for years.

Watching a lot of years ago, a sports festival in the preparation of which I participated, I vowed to be a popular artist to the end of life. I swore then all the forces of the soul, it will be the main business of my life. This was my main vocation.

My work in mass sports festival promoted my nomination to the committee for the VI World Youth and Students Festival in Moscow in 1957. I do not know that I still have to do in life, but this period may be, and will remain for me the happiest, most productive and most ambitious.

Costume designs for the ballet ‘The Scarlet Flower’. Novosibirsk Opera and Ballet Theater 1949

Stage design for the play ‘The Barbarians’ by M. Gorky, Maly Theater 1941

Stage design for the play ‘People of goodwill’ by G. Mdivani, Maly Theatre, 1950

Sketches of scenes for the play Othello. Realistic theater, 1936

Stage for the play Othello

Sketch of stage for the play Othello. Realistic theater, 1936

Sketch of stage for the play Othello. Realistic theater, 1936

Sketch of stage design for the play ‘Front’ by A. Korneichuk, Maly Theater, 1942

Sketch of scenes for the play Othello. Realistic theater, 1936

Scene from the play The Aristocrats

N.N.Rybniov. ‘Truth is good, but Happiness is better’ by A.N. Ostrovsky. Maly Theater, 1941

Design of side panel for the play Colas Breugnon by R. Rolland. Realistic Theater 1937

Costume sketches for Poliksena and Platon

Costume design for ‘Tattooed’ for the play ‘The Aristocrats’ by N. Pogodin. Realistic Theater, 1935

Costume design for ‘Sonka’ for the play ‘The Aristocrats’ by N. Pogodin. Realistic Theater, 1935

Costume design for ‘Lemon’ for the play ‘The Aristocrats’ by N. Pogodin. Realistic Theater, 1935

Costume design for Beret’ for the play ‘The Aristocrats’ by N. Pogodin. Realistic Theater, 1935

A scene from the Maly Theater ‘Truth is good, but happiness is better’. Design by Boris Knoblok

Boris Knoblok with his mother, 1929